Race 1: Another victory for the #23 HP Racing and the #24 Orhès Racing

The Ligier JS P4s and Ligier JS2 Rs roared to life this Saturday morning at Circuit Paul Ricard for race one of the Le Castellet Heat. The #23 HP Racing by Monza Garage Ligier JS P4 took its third win of 2021 in the sports prototype category. After taking its first victory in Austria, the #24 Orhès Racing Ligier JS2 R repeated the feat, winning ahead of the #53 M Racing entry.

Starting from pole position, the #23 HP Racing by Monza Garage Ligier JS P4 driven by Jacopo Faccioni held on the lead. The #34 Les Deux Arbres with Nelson at the controls overtook the #33 sister car with Jacques Nicolet behind the wheel. Despite contact with the #53 M Racing Ligier JS2 R, the #33 Ligier JS P4 caught up to the #34 car and then moved past at the 20-minute mark of the race. The #23 of the Italian team continued to pull away from its adversaries, building up an almost 20-second lead. 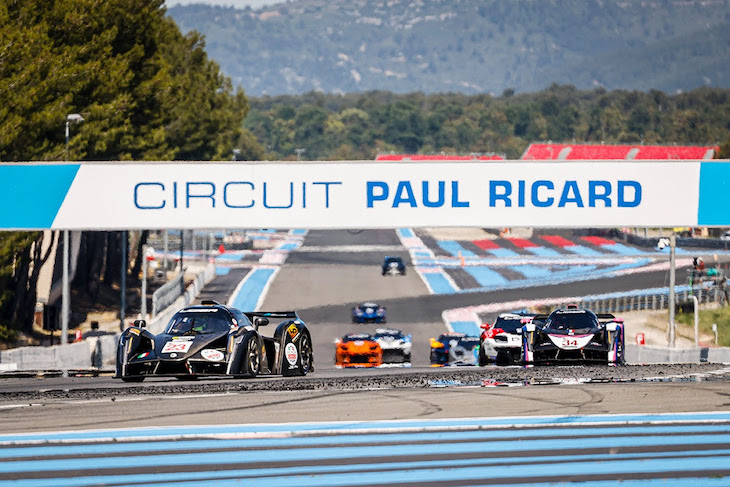 At half-distance, the pitstop window opened. The #23 Ligier JS P4 was the first in its category to stop. Jacopo Faccioni handed over to Alessandro Cicognani. When the #34 Les Deux Arbres car came in for its stop, the #33 stayed out. However, the strategy did not pay off as Jacques Nicolet returned to the track behind the #23, which was back in the lead, and the #34. A battle ensued between the two Les Deux Arbres cars, which ended after contact and a spin by the #33. With a 25-second lead over its rivals, the #23 HP Racing by Monza Garage car went on for its third win of the season, with Jacopo Faccioni setting the fastest lap of the race in 2:04.917s. The podium was completed by the #34 and the #33 of Les Deux Arbres. 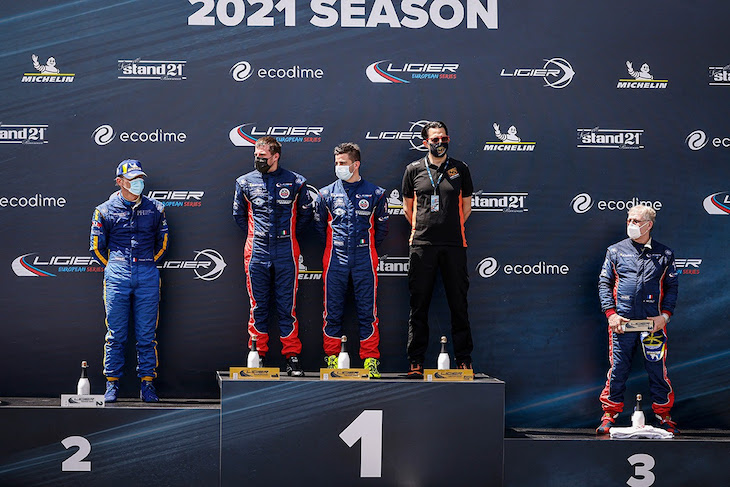 In the JS2 R category, the #24 of Orhès Racing driven by Olivier Pernaut got an excellent start. It overtook the #53 M Racing Ligier driven by Natan Bihel and even the #34 Ligier JS P4 of Les Deux Arbres. Behind it, the #4 COOL Racing machine with Cédric Oltramare at the controls remained in third place but was followed by the #95 CTF Performance with Nicolas Beraud. About 10 minutes after the start, the orange GT of CTF Performance passed the #4 of COOL Racing. 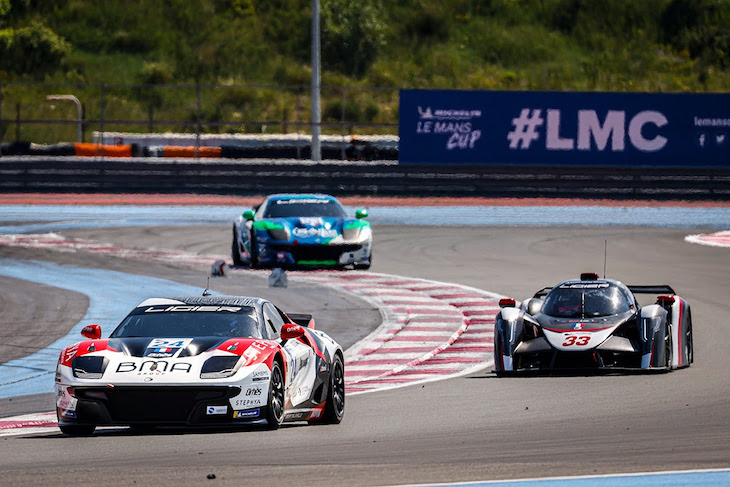 The battles at the sharp end of the order were tight. The #53 M Racing Ligier JS2 R got past the #24 of Orhès Racing with the hunter becoming the hunted. Olivier Pernaut kept the pressure on Natan Bihel, who resisted. Further back, the #95, the #4 and the #69 M Racing driven by Laurent Millara battled for third place. Cédric Oltramare in the #4 COOL Racing car finally made his way past the #95 CTF Performance car. 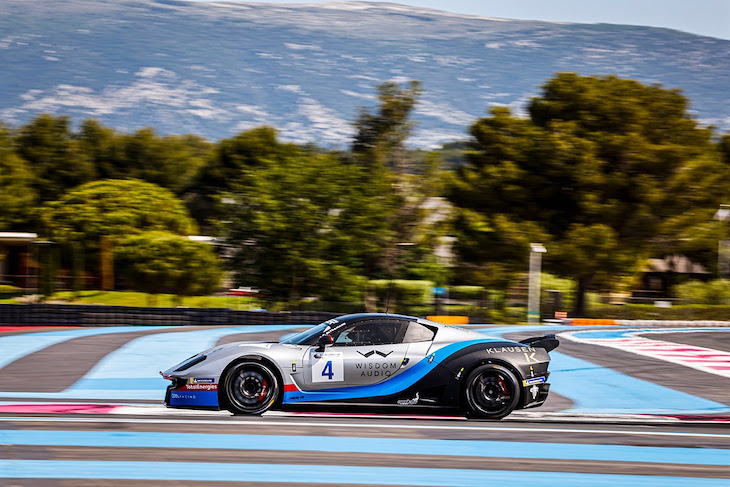 The #24 Orhès Racing Ligier JS2 R was the first to stop at the mid-way point of the race. It went back out with Mathieu Martins on board and once again took the lead from the #53 M Racing car. As the laps went by, the gap between the two leaders grew. The #24 was never challenged and went on for its second victory of the season. Mathieu Martins also set the fastest lap in the category in 2:07.917s. The #4 COOL Racing entry completed the top three, with Cédric Oltramare, who has shown tremendous form since the beginning of the weekend. The up-and-coming driver scored his first podium of 2021. 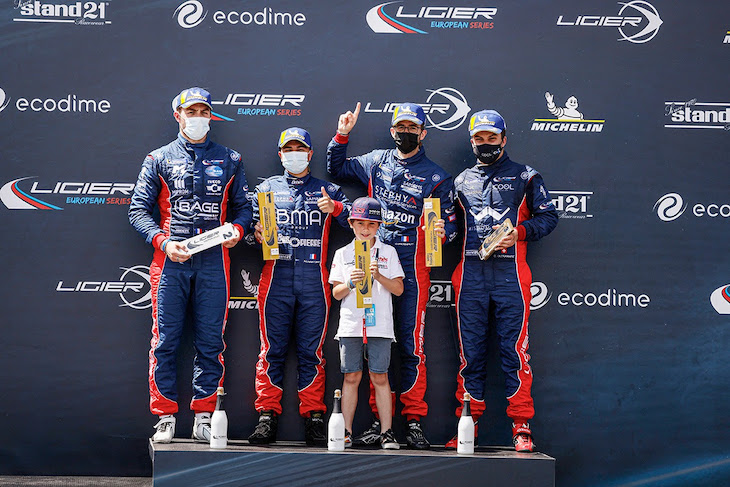 In the final laps of the race, Laurent Millara in the #69 Ligier JS2 R passed Fabien Delaplace in the #95 CTF Performance car and took the chequered flag in fourth place. Right behind them was the #25 Orhès Racing of Alain Bucher and Ayla Agren, followed by the #17 Arctic Energy machine driven by Sergeï Egorov and Povilas Jankavicius. 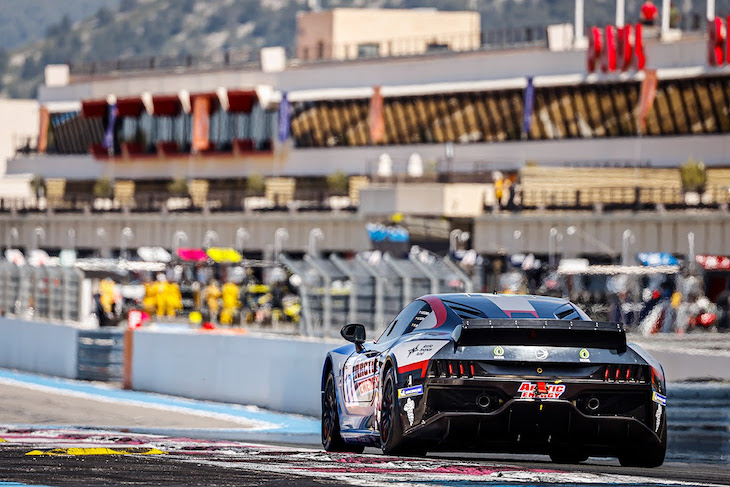 Jacopo Faccioni: “The race went very well. The car was incredible. We needed the first two rounds to fine-tune our set-up. And here we were excellent!”

Alessandro Cicognani: “Jacopo got a great start! Then I was able to keep the pace and we won our third race of the season.”

Mathieu Martins: “This is a very good result and I am very pleased. Olivier did the job in the first stint and I concentrated on being consistent in my stint. For the next Heats, we will have to win both races to get as many points as possible for the championship.”

Olivier Pernaut: “Race one went very well. I made a good start, a very good start. I even managed to pass a Ligier JS P4. I tried to keep the pace, a good pace. I’m happy because I held on and Natan Bihel [in the #53 M Racing car] only managed to pass me at the end of my stint. And then Mathieu got the upper hand in his stint!”

Heat 3 of the Ligier European Series concluded with an exciting race at the Circuit Paul Ricard in the South of France. After its triumph in race one on Saturday 5 June, the #23 HP Racing by Monza Garage Ligier JS P4 scored a double with its success in the second race of the day. In the Ligier JS2 R category, the tension was palpable between the #53 M Racing entry and the #24 Orhès Racing car. In the end, it was the #53 getting the win and consolidating its lead in the provisional general classification of the category. 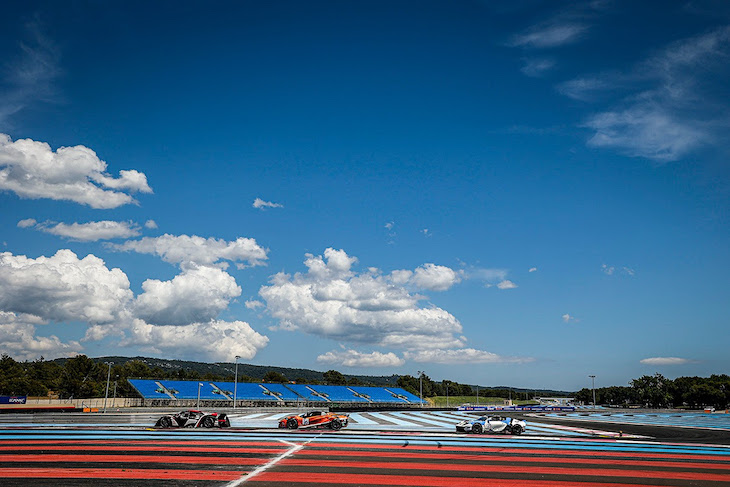 The #23 HP Racing by Monza Garage Ligier JS P4, driven by Alessandro Cicognani, started the race from pole with an extra advantage. Its Les Deux Arbres rivals, the #33 driven by Jacques Nicolet and the #34 by Nelson, started from the back of the grid after being given a penalty for not following pit lane procedures in the second qualifying session on Friday. Although they both moved up the order quickly, the #33’s efforts were spoiled by a spin that relegated it to the tail end of the field.

After 20 minutes of racing, the #34 and #33 Ligier JS P4s were respectively third and fifth overall, but far behind the #23 HP Racing by Monza Garage car. The gaps tightened after the mandatory pit stop. The #23 still led the race, followed by the #34 and the #33, which were duelling for second place. Jacques Nicolet spun again with eleven minutes remaining on the clock, while his #34 teammate suffered the same fate a few minutes later. The #23 HP Racing by Monza Garage car secured its second win of the weekend and fourth of the season, along with the fastest race lap of 2:05.016s with Jacopo Faccioni behind the wheel. 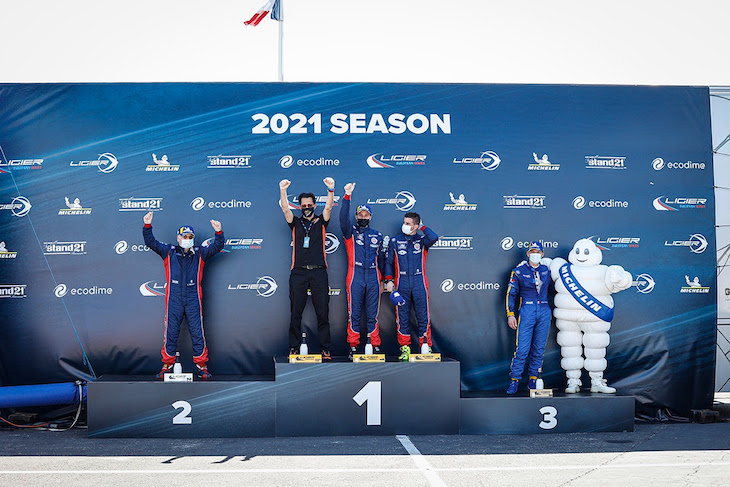 The action was more than intense in the GT category. While the #53 M Racing Ligier JS2 R driven by Natan Bihel started from pole, race one winner, the #24 Orhès Racing car with Mathieu Martins at the controls, chased it relentlessly. Ten minutes after the start, Natan Bihel ceded to the pressure and was overtaken by Mathieu Martins. Less than six-hundredths of a second separated the two. Further back, the #4 COOL Racing entry, driven by Cédric Oltramare, which started fourth, was determined to take third place from the #17 Arctic Energy car and driver Povilas Jankavicius. 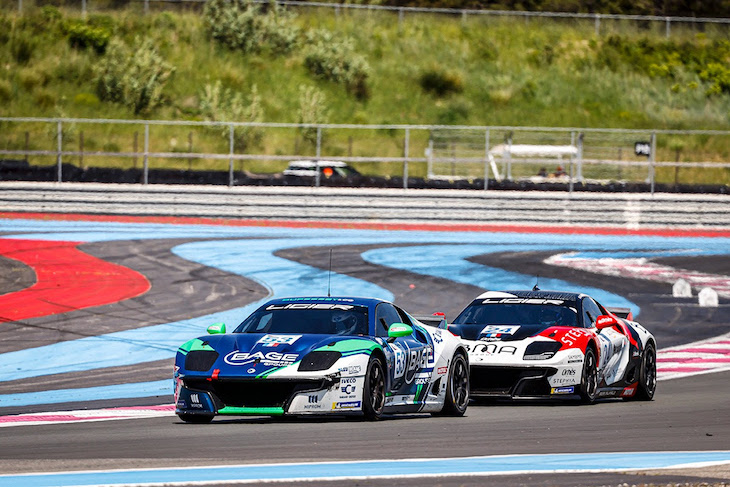 In the 37th minute, the #24 Orhès Racing Ligier JS2 R received a drive-through penalty for overshooting the track limits, which it served before the pit stop window opened. The #53 from M Racing was back in the lead, followed by the #4 and the #17.

Following the mandatory pit stop, the #4 COOL Racing car was leading the category. But Natan Bihel in the #53 was decided to win this weekend. Cédric Oltramare vigorously defended first place for several laps. With 15 minutes to go and after contact with the #53, the #4 car spun and was overtaken by the #53 and the #24 Orhès Racing car, now driven by Olivier Pernaut. 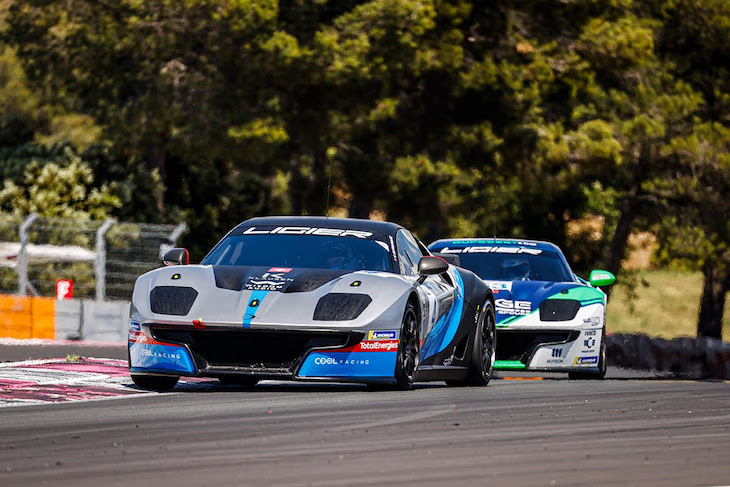 The #53 M Racing Ligier JS2 R suffered damage to the right rear and had to cope with the #24 again. The duel between the two teams and drivers resumed. Neck and neck, neither team wanted to budge until contact was made. Olivier Pernaut then managed to regain the advantage over Natan Bihel. Just as victory was within reach, the #24 Orhès Racing car was penalised once again with a drive-through for track limits. Despite being the first to take the chequered flag, the drive-through, which could not be served, was converted into a 30-second penalty, and the #24 was demoted to fourth place. 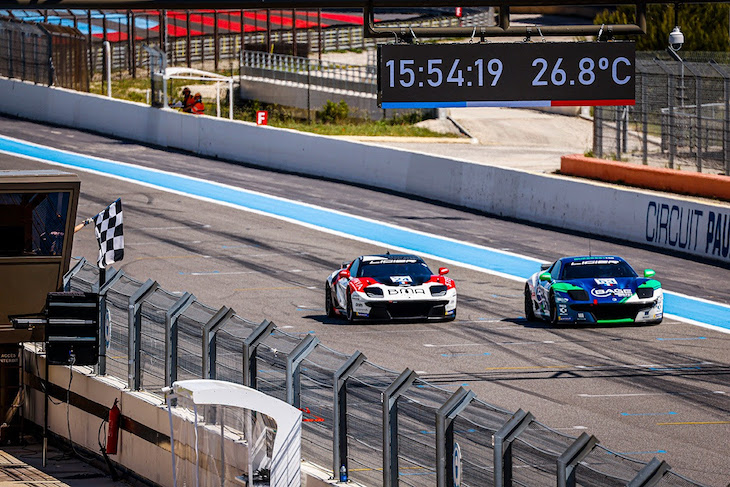 Natan Bihel took his fourth win in extremis in the #53 M Racing Ligier JS2 R. The #4 COOL Racing entry driven by Cédric Oltramare was again on the podium, this time in second place, while the #69 M Racing car driven by Laurent Millara finished third. The CTF Performance #95 driven by Nicolas Beraud and Fabien Delaplace was fifth. It was followed by the #25 of Orhès Racing with Alain Bucher and Ayla Agren at the controls, and the #17 of Arctic Energy driven by Sergeï Egorov and Povilas Jankavicius. 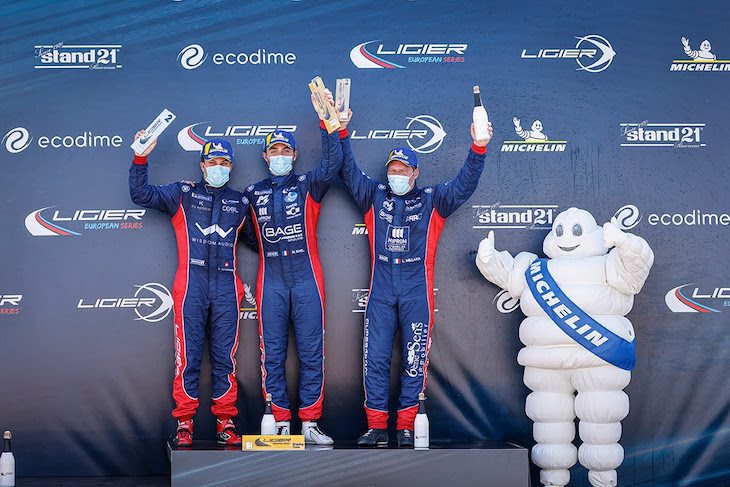 Jacopo Faccioni: “We couldn’t have done better this weekend! I am very happy. In race two, Alessandro did a very good stint and handed the car over to me in first place. I just had to keep going and maintain a sufficient gap to my competitors. I hope we can improve again at Monza, especially as it’s our home track!”

Alessandro Cicognani: “What a weekend! Best time in free practice, two pole positions, two wins, the fastest lap in the race. I wish every weekend was like this! I hope we can do the same at Monza, on home soil!”

Natan Bihel: “In the first part of the race, Mathieu [Martins] was faster than me. I didn’t feel at ease in the car, I don’t know why. I was a bit lucky because he was given a drive-through penalty that allowed me to come out after the pit stops with a comfortable lead over Olivier [Pernaut]. I thought it would be enough but I was blocked by the #4 from COOL Racing and Olivier caught up to me. And the battle was on. He was very incisive! In the end, I won after he too received a drive-through, which allowed me to add to my lead in the provisional classification!”