The Italian round of the Ligier European Series came to a close after two hotly contested races in which four teams took top honours. The #34 Ligier JS P4 of Les Deux Arbres won race 1 for the third time this season. In the Ligier JS2 R category, it was the #53 M Racing Ligier JS2 R that stood above the rest, scoring its fifth victory of the season and, thus consolidating its position as leader in the provisional classification. Race 2 ended with a home victory for the #23 HP Racing by Monza Garage Ligier JS P4 and another success for the #24 Orhès Racing Ligier JS2 R, the third since the start of the season.

The Ligier European Series field put on a show worthy of the Temple of Speed this Saturday morning at Monza. After several lead changes in both categories, the #34 Les Deux Arbres Ligier JS P4 and the #53 M Racing Ligier JS2 R won race one of the Monza Heat in Italy.

The opening race of the day kicked off at 10:35 am sharp. The #23 HP Racing by Monza Garage Ligier JS P4 with Alessandro Cicognani on board started from pole, followed by the #34 Les Deux Arbres driven by Patrice Lafargue. From P5 on the grid, the #27 24-7 Motorsport car driven by Andrew Ferguson made a good start and moved up to third, while the #33 Les Deux Arbres car with Jacques Nicolet dropped to fifth in the category behind two Ligier JS2 Rs. Within minutes after the race went green, the #27 and #34 were involved in a fierce battle, which resulted in a drive-through penalty for the #27 car due to unsportsmanlike driving, which saw it drop to tenth place overall. 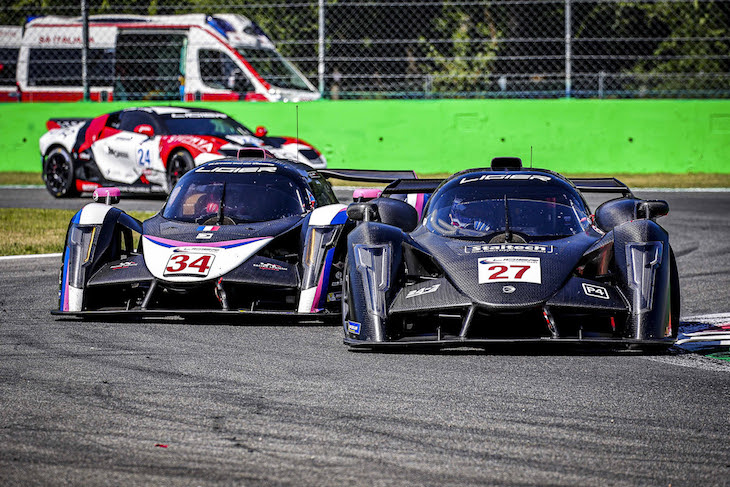 After ten minutes of the race, almost all of the Ligier JS P4s were at the sharp end of the order, with the #23 HP Racing by Monza Garage leading the way. However, Alessandro Cicognani was followed closely by Steve Zacchia in the #32 of Les Deux Arbres. The Frenchman made an unsuccessful attempt to overtake. Further back in the field, the duel for third place was just as intense between the #34 and the #33.

Soon after, the pit stops began. The #33 and #34 Ligier JS P4s entered first, while the #23 and #32 stayed on track before stopping in turn, followed by the #27. The #32 driven by Patrick Zacchia led for the first time in the race, ahead of the #23, now with Jacopo Faccioni behind the wheel. Behind them, it was the #34 with Dimitri Enjalbert and the #33 driven by Jacques Nicolet. The #27 driven by Jeremy Ferguson moved up to sixth place overall.

But then a spin of a Ligier JS2 R brought out the safety car, with 20 minutes left in the race. The #23 still led and managed to put in a solid restart. The #34 caught up to its rivals and moved into second place. An intense battle between Italy’s Jacopo Faccioni and France’s Dimitri Enjalbert began, marked by late braking and side-by-side racing. They swapped the lead several times before the #34 got the upper hand and eventually went on for an eight-second margin of victory. Les Deux Arbres scored its third victory of the season, following the success at Barcelona and the Red Bull Ring. It is also the second victory for Patrice Lafargue and the first victory for series newcomer, Dimitri Enjalbert. 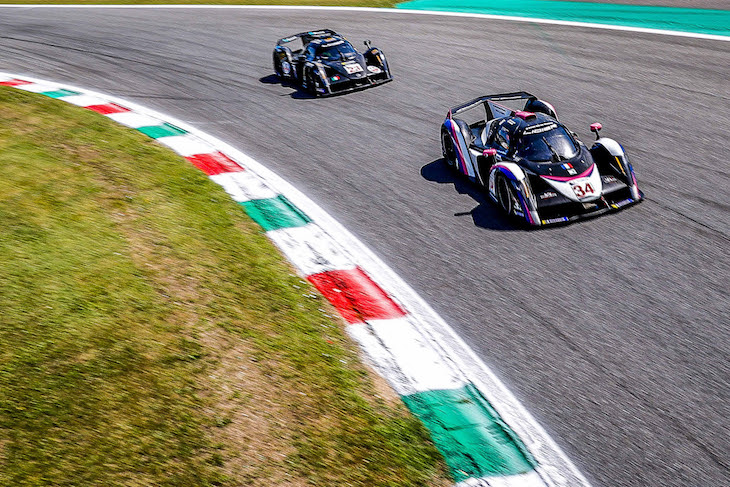 The #23 Ligier JS P4 came second but set the fastest lap of the race thanks to Jacopo Faccioni (1:58.550s). Third place on the podium went to the #27 24-7 Motorsport car, which battled back in the second half of the race. 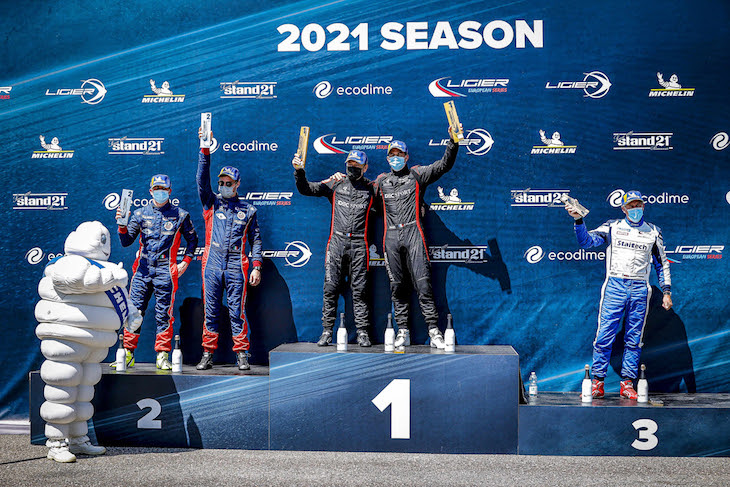 The action was just as intense in the GT category. At the start, the #53 M Racing Ligier JS2 R driven by Natan Bihel and the #24 Orhès Racing car driven by Mathieu Martins managed to get stuck in with the Ligier JS P4s. Further down the grid, the #95 CTF Performance Ligier JS2 R with Nicolas Beraud at the controls was third, followed by Laurent Millara in the #69 M Racing sister car. The bold #53 didn’t hesitate to keep a close eye on its Ligier JS P4 rivals.

But Natan Bihel was soon caught by Mathieu Martins in the #24 Ligier JS2 R. Twenty minutes into the race, the Orhès Racing car took advantage of the destabilisation of the #53 in a corner to move past. In another close battle, the #53 regained the lead a few minutes later, only to be relegated to second place by the #24. The pit stop window then opened. 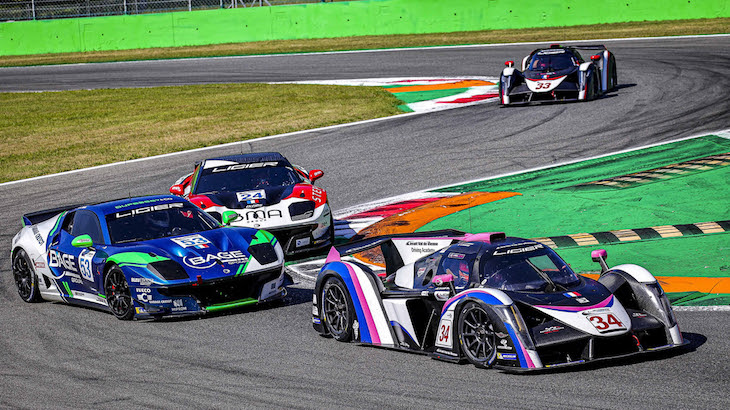 Now with Olivier Pernaut in the cockpit, the #24 Orhès Racing Ligier JS2 R was still in the lead, followed by the #95 CTF Performance car driven by Fabien Delaplace, and the #53 M Racing entry. Just minutes after the pit stop window closed, the #25 Orhès Racing car driven by Paolo Collivadino spun and got beached in the gravel, causing the safety car to be called into service.

At the restart, the #53 Ligier JS2 R took the lead from the #24 Orhès Racing. After several laps, the #95 CTF Performance car was overtaken by Laurent Millara in the #69 M Racing car. The #95 also received a drive-through penalty for exceeding track limits, which it served during the extra lap at the end of the race. 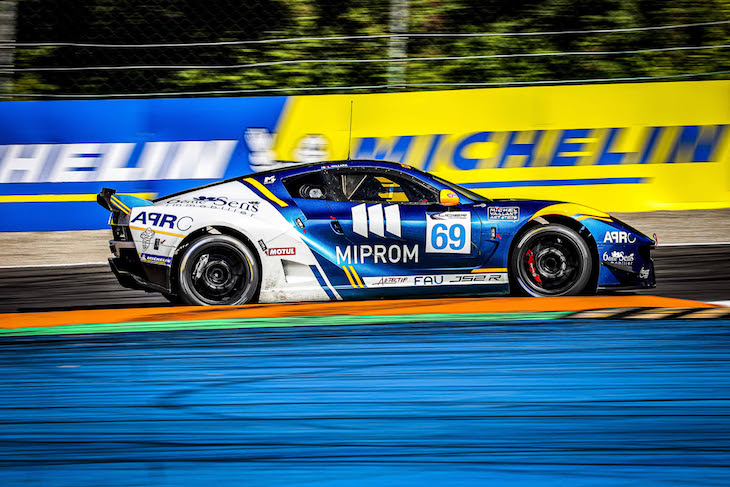 With a three-second lead over its arch-rival, the #53 M Racing Ligier JS2 R scored race win number five of the season. Natan Bihel also recorded the fastest lap of the race in 2:02.049s. Finishing just behind the #24 Orhès Racing car, the #69 M Racing entry gave the team a double podium finish. 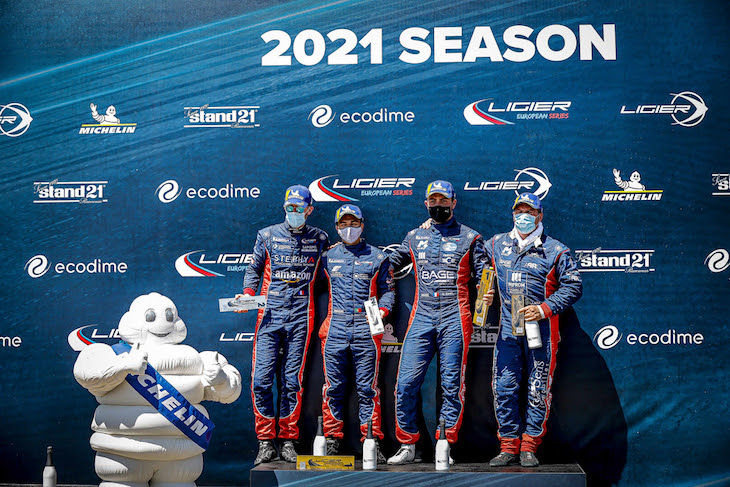 Race 2: Home victory for HP Racing by Monza Garage, and another success for Orhès Racing

After finishing runner-up in Race 1, the Italian HP Racing by Monza Garage team took its fifth victory of 2021, this time on home soil. In the GT category, the #24 Orhès Racing Ligier JS2 R won for the third time this season after a hard-fought battle with its rival, the #53 M Racing car. 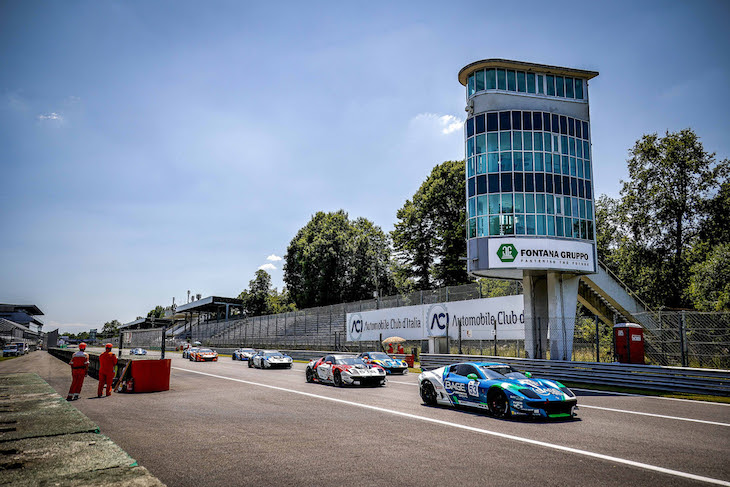 Race two of the Ligier European Series got underway at 2.35 pm. The #27 Ligier JS P4 of 24-7 Motorsport had to withdraw due to a mechanical problem. The #34 of Les Deux Arbres, driven by Dimitri Enjalbert, qualified on pole position the previous day and quickly opened up a gap from the #23 HP Racing by Monza Garage, with Jacopo Faccioni behind the wheel. The #33 of Les Deux Arbres with Jacques Nicolet was third, while its sister car, the #32 driven by Patrick Zacchia, fell to eighth place overall. 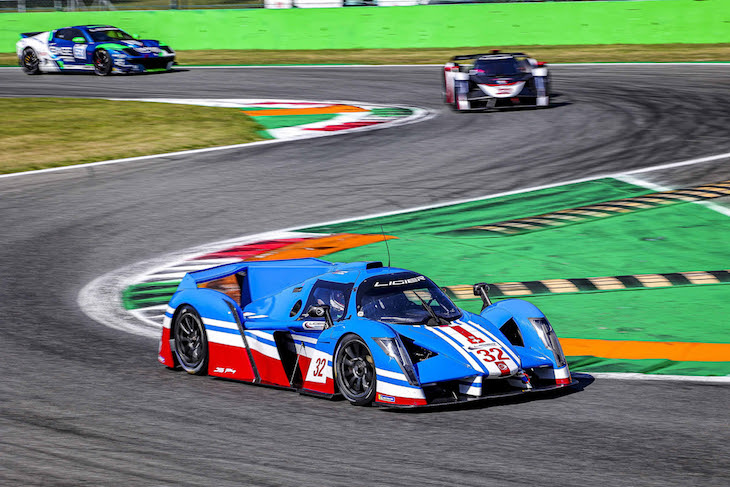 The #34 Les Deux Arbres Ligier JS P4 was still in the lead when the pit stop window opened. Dimitri Enjalbert handed over to Patrice Lafargue. Several sports prototypes did not make their stop in accordance with the rules. The #33 received a drive-through penalty for crossing the white line at the exit of the pitlane, while the #23 driven by Alessandro Cicognani received a three-second stop and go for not respecting the mandatory pit stop time. 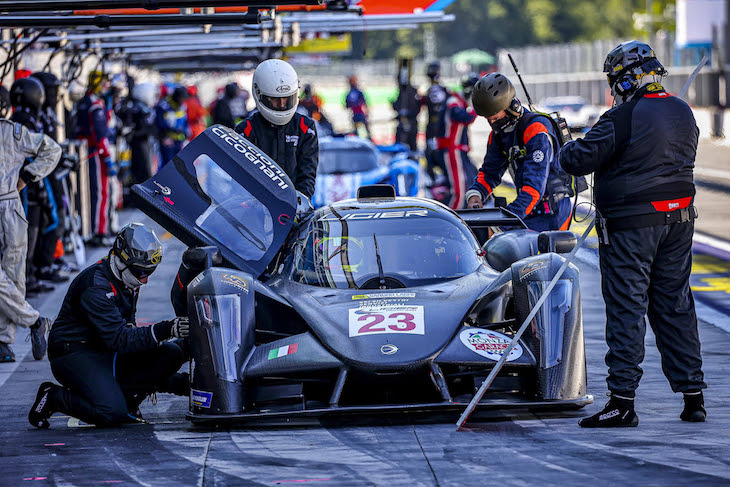 The #34 Ligier JS P4 spun 20 minutes before the end of the race. The #23 then seized the opportunity to take the lead. The #34 did not want to relinquish the lead so quickly, as it took over the race lead 15 minutes before the chequered flag was waved. But just as victory seemed assured, Patrice Lafargue was forced to return to the pits after a mechanical problem linked to his run through the gravel. The #23 HP Racing by Monza Garage car went on to take the win, followed by the #33 and the #32 Les Deux Arbres. Dimitri Enjalbert in the #34 set the fastest lap of the race in 1:57.852s. 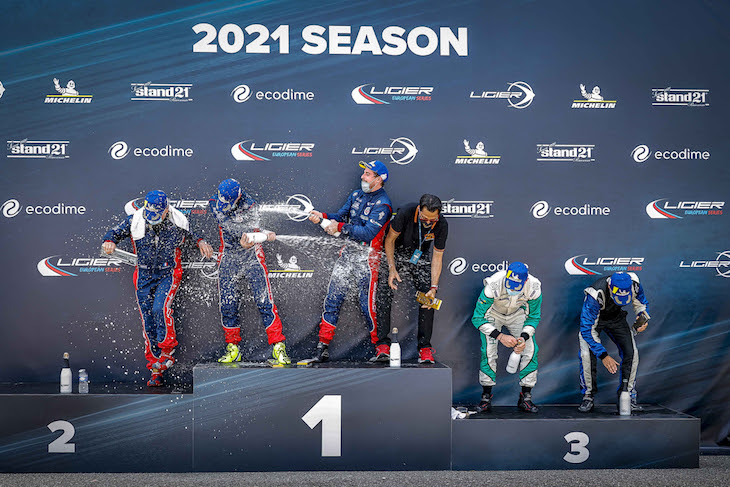 In the Ligier JS2 R category, the #24 Orhès Racing car with Olivier Pernaut at the controls took the lead from the #53 M Racing car driven by Natan Bihel on lap two. But the Silver driver regained the lead a few minutes later and extended the gap to his rival.

The battle for third place was much hard-fought between the #25 Orhès Racing Ligier JS2 R driven by Paolo Collivadino, the #4 COOL Racing car with Cédric Oltramare, the #69 M Racing car driven for Laurent Millara, the #95 CTF Performance car with Fabien Delaplace and the #17 Arctic Energy car and its driver Egidijus Gutaravicius. The #4 and the #25 took third place before the #69 eventually got the upper hand. 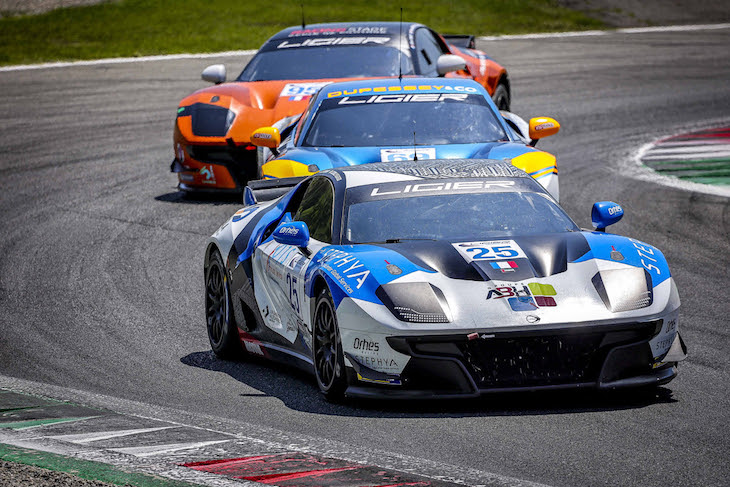 Fifteen minutes after the start of the race, the #25 Orhès Racing Ligier JS2 R went off the track and brought out a yellow flag. It dropped to fifth place in class behind the #4 COOL Racing car and ahead of the #95 CTF Performance car.

After the mandatory pit stop, there was another leader change in the GT category. The #24 Orhès Racing Ligier JS2 R was back in the lead with Mathieu Martins on board. Behind it was the #69 and the #53 M Racing cars. Natan Bihel quickly overtook Laurent Millara and started his chase once again, but he was eight seconds behind Mathieu Martins. A new obstacle was placed in the path of the Ligier JS2 R championship leader, who was given a two-second stop-and-go penalty for not respecting the pit stop time. He then lost any chance of a podium finish and had to settle for fourth place. 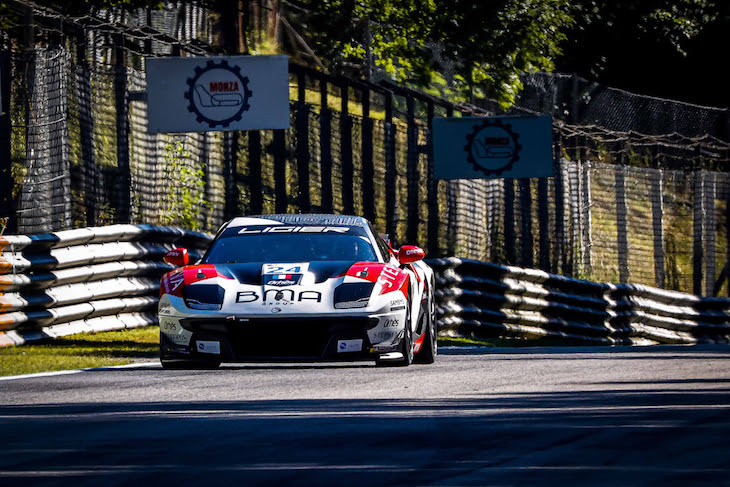 While the #24 Orhès Racing entry was on its way to victory, the duel for second and third place was on the boil between the #4 COOL Racing car and the #69 M Racing machine. Laurent Millara repeatedly attacked Cédric Oltramare, who resisted as best he could. But on the last lap, the #4 of COOL Racing ceded and finished third, behind the #69, which took its second runner-up finish of the season. Mathieu Martins in the #24 set the fastest lap of the race in 2:02.111s. 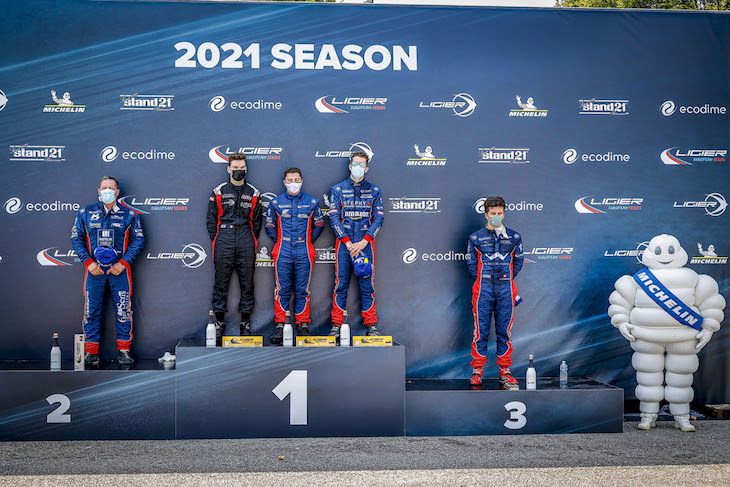 Dimitri Enjalbert: “The Ligier JS P4 is an exceptional car. This was my first time in the Ligier European Series and it was a real pleasure from start to finish. Especially with a great win in race one this morning. Unfortunately, we couldn’t repeat that in race 2. While in the lead along with Patrice, we had to retire with a few minutes to go due to a mechanical problem.”

Natan Bihel: “I am happy to have won. There were some great battles with Mathieu and Olivier. That’s how it is in the Ligier European Series! I would also like to thank M Racing, without whom I wouldn’t have been able to take pole position yesterday or win the race today. The championship is not over and even though I’m leading, I want to win more races.”

Jacopo Faccioni: “It’s been a good weekend. We came hoping to win both races: we were second in race 1 and we won race 2, which is a very good result for us. Monza is the Temple of Speed so it’s not an easy track. You always have to push and push and push. The intervention of the safety car can change everything so you have to stay very focused for the entire race.”

Alessandro Cicognani: “Generally speaking, I am very satisfied with our weekend. Best time in free practice, pole position, second place in race 1 and especially victory in race 2! Jacopo did a very good stint and when it was my turn, we don’t really know what happened but we received a penalty after the pit stop. But I didn’t give up, I wanted to bring this victory home!”

Mathieu Martins: “It went very well. Olivier did a great job in the opening stint by closing the gap to Natan. And after the pit stop, I was leading! I can’t wait for the next races at Spa Francorchamps, it’s one of my favourite circuits. We still have a lot of points to score before we catch Natan and win the championship.”