RAM Racing and Newbridge Motorsport will start Sunday’s Intelligent Money British GT Championship round at Donington Park from pole position after topping the combined GT3 and GT4 times in this afternoon’s qualifying session.

Scott Malvern moved Team Parker’s Porsche up to fourth in the final classification after setting the two fastest times of all.

But it wasn’t just close at the top. In fact, all nine entries remained in contention after lapping 0.8s apart, which set up an intriguing Q2 that proved just as tense and even closer.

In truth, it would have been a done deal had Yelmer Buurman’s first and second efforts not strayed beyond the white lines. But it proved third time lucky for the Dutchman who finally sealed pole despite lapping marginally slower than Keen who reduced his and Igoe’s deficit to 0.051s.

Sandy Mitchell was one of just four drivers to break into the 1m26s bracket, which was sufficient to move Barwell’s #1, Lamborghini, up one place to third.

Nick Jones ended Q1 sixth and 0.6s shy of the provisional pole but starts fourth tomorrow after his Team Parker co-driver Scott Malvern produced the day’s two fastest individual times. It took a while before anyone came close to matching his early benchmark but when they did the Porsche had already improved and did so again on its final flying lap to set a best of 1m26.670s. As such, the 911 starts fourth.

McLarens share row three thanks to standout laps from Marcus Clutton (Enduro Motorsport) and Lewis Proctor who, like Malvern, saved his best until last. Indeed, Balfe Motorsport’s 720S was second fastest in the session en route to Silver-Am pole.

Paddock’s Bentley slipped to seventh in the combined times and starts alongside Beechdean AMR’s Vantage, while championship leaders Leo Machitski and Dennis Lind have work to do from ninth after an uncharacteristically scruffy session.

Fresh from its maiden victory during the Silverstone 500, Newbridge Motorsport continued its dream start to life in British GT with drivers Matt Topham and Darren Burke scoring pole position at Donington Park. 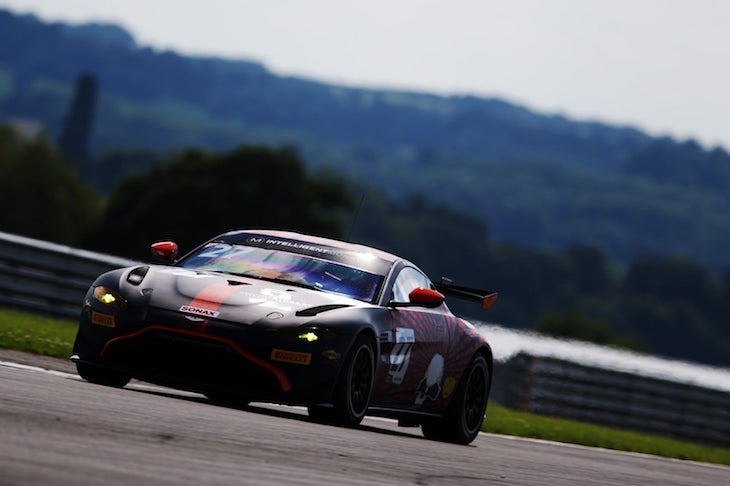 The team is without Aston Martin factory driver Darren Turner for this round due to his clashing Goodwood commitments, but Burke proved a more than handy stand-in by backing up a strong early effort from Topham to put the #27 Vantage top of the pile ahead of tomorrow’s race.

McLaren initially looked most likely to come out on top as Alain Valente and Katie Milner set the early pace to occupy a Team Rocket RJN one-two during the opening stages. But as the pace rose, the picture changed.

After a conspicuously quiet morning, Academy Motorsport finally showed its hand as Matt Cowley went fastest to demote the McLarens, and was quickly followed by Richard Williams in Steller Motorsport’s Audi, which slotted into second place, just a tenth down on the Mustang.

Valente kept one of the RJN McLarens in the mix in third, just ahead of best placed Am, Topham, whose fastest time fell just 0.394s shy of top spot. And that would ultimately prove key.

Burke was installed for the second element and swiftly set a 1m35.333s to vault the Vantage onto the provisional pole. Newbridge looked good, but it didn’t stop its rivals from throwing everything at it to depose them.

Harry Hayek came closest, his best lap moving RJN’s #4 McLaren within 0.055s of pole. A terrific attempt by Scott McKenna, who went fastest of all with 1m35.099s, elevated the Toyota Gazoo Racing UK Supra he shares with John Ferguson to third, just 0.071s off the top spot.

Mark Sansom and Charlie Robertson did enough to annex fourth in their Assetto Motorsport Ginetta G56, just ahead of the Williams/Sennan Fielding Audi. The order was so close that Will Moore’s best wasn’t enough to prevent Academy’s Mustang from starting sixth, yet the crew were less than three tenths off on their combined time.

Michael Benyahia/Valente will start seventh, a place ahead of the sister car shared by James Kell/Jordan Collard. Century’s championship-leading BMW of Gus Burton and Will Burns heads up row five, with Ashley Marshall/Jack Brown’s Balfe Motorsport McLaren rounding out the top 10.