In the last half an hour of The 61st ADAC Reinoldus endurance race, NLS 5 and the first of a weekend double-header in the Nurburgring Langstrekke Series, the order in the leading group changed several times.

At the flag, Max Hesse, Daniel Harper and Neil Verhagen from the BMW Junior Team, run by Team RMG, were the first to cross the finish line for a second consecutive win. 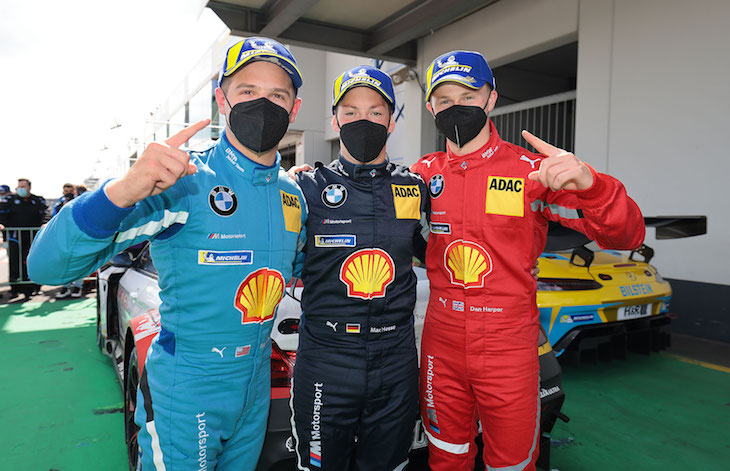 After their maiden victory at the 52nd Adenauer ADAC Rundstrecken-Trophy, the talented trio in the BMW M6 GT3 celebrated their second success in the Nürburgring endurance series with unchanged racing tactics.

“Compared to our last victory, it was a bit more difficult with fifth place due to the poorer starting position. But, I had a very good first lap and I drove straight up to second place, so I was able to put pressure on the Lamborghini, which was leading at the time. Fortunately we didn’t have any problems today, we were able to drive through the race cleanly without penalties or anything else. Our pace was very good. The competition was even stronger this time, but that’s what makes the challenge in the end ”, said a satisfied Max Hesse, who with Verhagen and Harper also took the lead in the NLS Speed ​​Trophy. 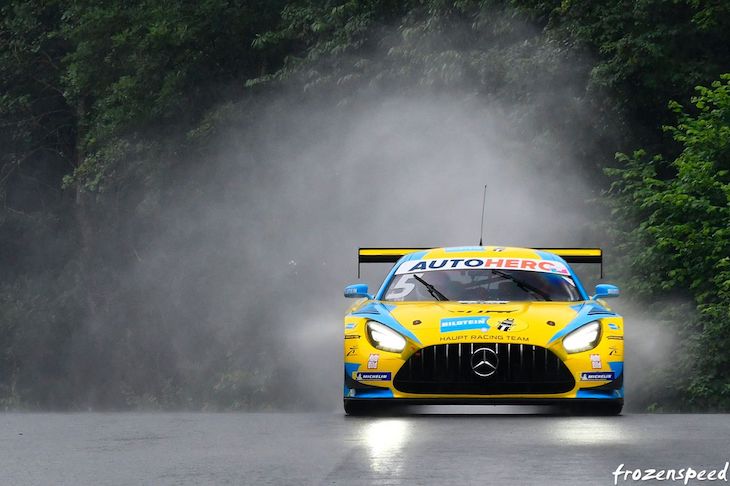 Hubert Haupt, Adam Christodoulou and Patrick Assenheimer from Haupt Racing Team Bilstein landed in second place with the Mercedes AMG GT3. “During the race, I thought for a long time that we would get stuck in fourth or fifth place. Adam did really well in the last few laps. The other cars were unlucky in the end. From my own painful experience, however, I know that you have to cross the finish line in a race first. We did that today. The youngsters in the BMW are very strong, so young and so flawless. You have to acknowledge that, they deserved to win. If we get back on the podium tomorrow, we’ll be happy, ”said Hubert Haupt. 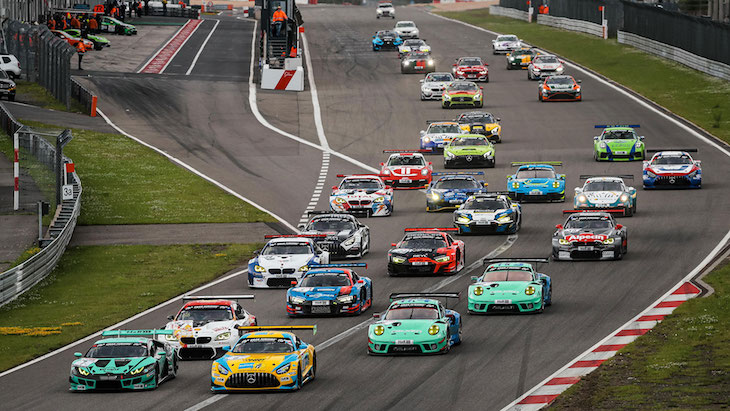 Vincent Kolb and Frank Stippler finished third in their Audi R8 LMS GT3 from Phoenix Racing. “My start was bad because pole sitter ‘Kuba’ Giermaziak slowed down in the Lamborghini. You can certainly just drive straight ahead, but then I fell into his trap. We fell back from second to fifth, which caused problems for ourselves. That’s why we had to work more than was necessary. We lost second place shortly before the end, but on the other hand the competition was also very unlucky, so we’re happy with third place. We are happy to be on the podium again, ”said Frank Stippler.

The Falken Motorsports team’s Porsche 911 GT3 R had bad luck. About 25 minutes before the end, Martin Ragginger found the barriers at Brünnchen after contact during an overtaking manoeuvre. At that point, the Austrian and his team-mate Alessio Picariello from Belgium were only 16 seconds behind the BMW junior trio in second place. 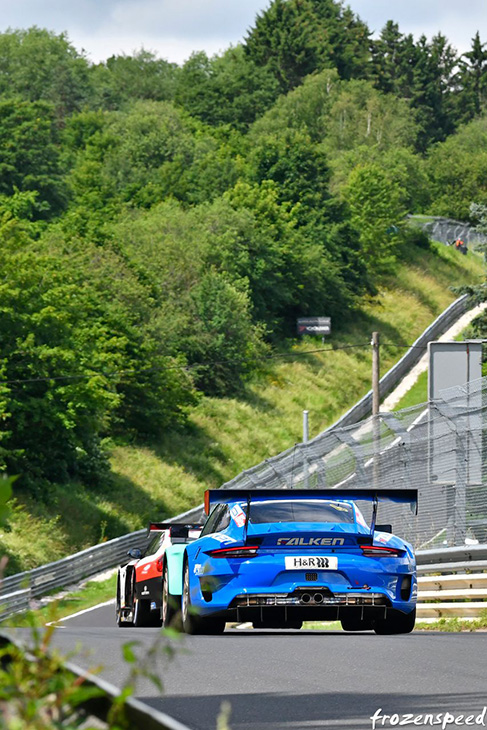 Just three minutes later, David Pittard’s car had a puncture on the last few metres of the Grand Prix circuit. For the Walkenhorst Motorsport team’s BMW M6 GT3, the dream of a podium was also over. In the end, Pittard finished fifth overall with Christian Krognes and Ben Tuck. 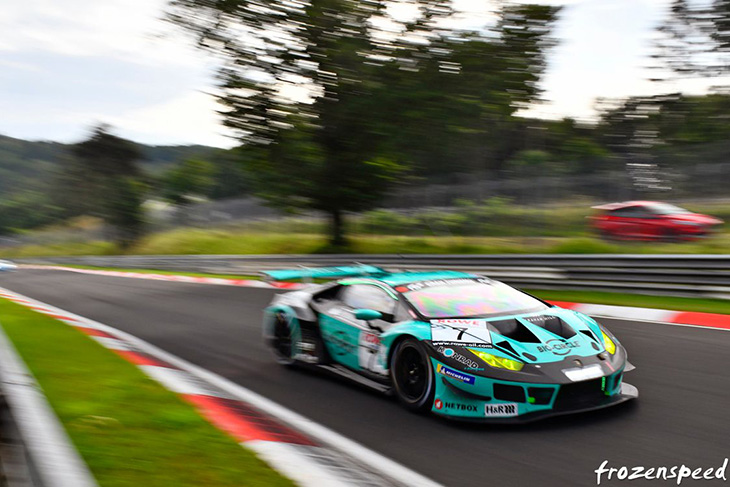 Vincent Kolb and Adam Christodoulou delivered what was probably the most fascinating duel of the race in the final phase, with the better end for the Briton. “I’m still a little amazed that we finished second. The team told me over the radio that we would be fifth or sixth. Then the Porsche had an accident and all of a sudden it was said, by the way, we are now fighting for third place. Two laps further it was about second place. I had a great duel with Vincent. In the Ex-Mühle section, I was able to overtake him with two tires on the grass. He had two slower Porsches in front of him and I took advantage of the opportunity. Tomorrow Manuel Metzger will drive in my place and I hope that he will improve by one place with Hubert and Patrick. ”

A Kolb was also successful in the SP9 Pro-Am. Patrick Kolb won the class in the Audi R8 LMS GT3 from Car Collection Motorsport with Lorenzo Rocco, Mattia Drudi and Milan Dontje. In the SP9 Am, Janine Shoffner and Moritz Kranz drove to the fourth class win of the season in a row. In Cup5, Marc Ehret, Moritz Oberheim and Nico Otto in their BMW M2 CS Racing from FK Performance Motorsport won for the second time this season. In the X Cup, the KTM X-Bow GTX from Teichmann Racing raced to class victory with Daniel Bohr, Timo Moelig and Reinhard Kofler.

In V4, the reigning champions of Adrenalin Motorsport Team Alzner Automotive, Christopher Rink, Danny Brink and Philipp Leisen won for the fourth time with the BMW 325i. Brink and Leisen though had to surrender the overall Championship lead in the NLS to Daniel Blickle, Tim Scheerbarth and Max Kronberg who took a third class win in the Cayman GT4 Trophy by Manthey Racing with the Porsche 718 Cayman GT4 CS from W&S Motorsport. The trio now has 38.24 points compared to Adrenalin’s 38.22. Ten years after his championship title, Tim Scheerbarth is back in first place: “It is unusual for me that we are not going home today. So tomorrow the whole thing will start all over again. We are now ahead of the overall standings with a 0.02 point lead. Ultimately, only the placement counts, nobody asks about the rest. If someone had told me before the season that you had three wins and a second place in the class after four races, I would have hit the ground running straight away. It looked simple, but it is by no means the way it looks. ”