Walkenhorst Motorsport secured their first season win in the NLS with Sunday’s second helping of action closing a successful double-header with the win going to Christian Krognes, David Pittard and Ben Tuck in the #34 BMW M6 GT3.

The podium places were completed by Vincent Kolb and Frank Stippler in the Audi R8 LMS GT3 from Phoenix Racing in second place and Dennis Olsen, Tobias Müller and Alessio Picariello in the Falken-Porsche 911 GT3 R in third place.

In the fight for the overall championship, the Adrenalin Motorsport Team Alzner Automotive BMW retook the advantage with serial winners Danny Brink and Philipp Leisen. 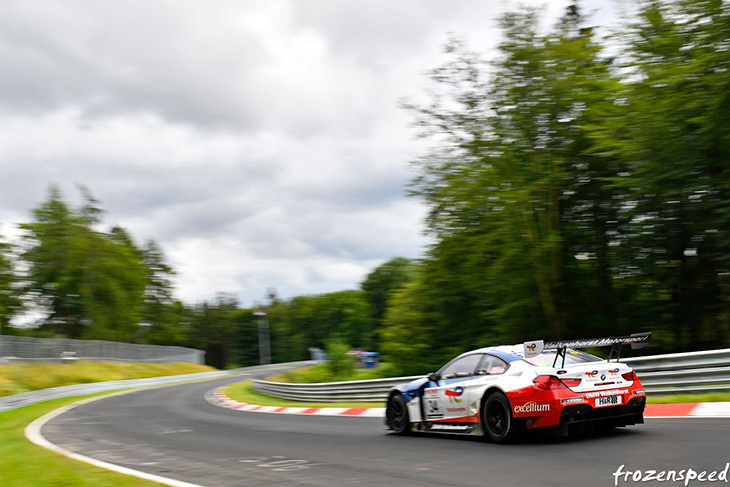 “It was quite a day for Christian Krognes, NLS 6, The 44th RCM DMV Borderland Race was all about the Norwegian, who started proceedings with a 7:51.807 unofficial lap record in qualifying.  Overjoyed he climbed out of the car and pounded on the roof of the BMW.   Better still was to come with his first win after no fewer than 9 prior visits to the podium. For teammate Ben Tuck it was also a first win, David Pittard meanwhile would taste NLS victory for a second time.

“The first overall victory and unofficial lap record. You can not reach more in one day. We had a year full of challenges so far. But, this time everything worked perfectly.

“The car was extremely strong. The last laps were very exciting for me. For a brief moment, it was said that the Audi of Vincent Kolb in front of me would have a time penalty and I thought we were at second place certainly. Then the news came that the penalty was withdrawn, I have to overtake him. I pushed again straight away and it worked. That was a great feeling, “said Christian Krognes, whose duel with Kolb in the Audi R8 LMS GT3 from Phoenix Racing was a cracker. After third place the day before in NLS 5, the Frankfurter comforted himself with teammate Frank Stippler with a second consecutive podium finish. 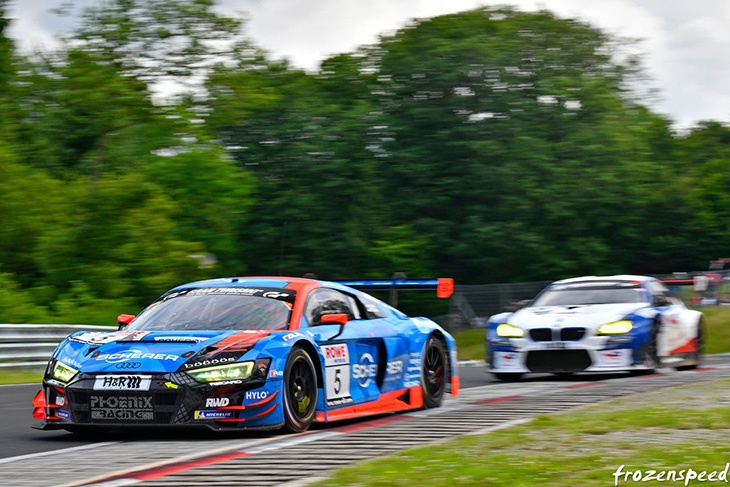 “It was a very fair battle with Christian in the last laps. He came again and again, at some point I could not keep up the speed and no longer had the gap. Too bad. But, it was really exciting, I’ve learned a lot from it and I enjoyed it – it was a lot of fun. In the end I had a little problem in traffic. With second place we can still be very happy. Now three times on the NLS podium so our performance in recent weeks has been extremely good, “said Vincent Kolb.

Tobias Müller in the Porsche 911 GT3 R of Falken Motorsports was also very happy. “Until one kilometre before the finish line, I did not know my exact place. Then I learned that the Lamborghini was behind us in P4. With less than half a litre of gas, I did it still make it to Parc Fermé, “he said. 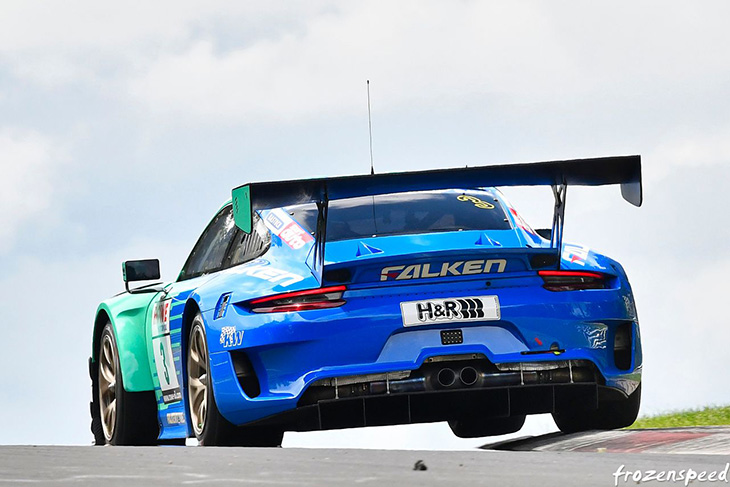 “I’m just overwhelmed. It was an exciting last stint. In the first two hours of the race we were out of range and have lost a lot of time, there were vibrations in the car, we had to check that briefly. That sent us a little backwards,” said Müller, who together with Dennis Olsen and Alessio Picariello shared the final podium slot.

The situation was very different in the BMW Junior Team camp. Shortly before the end of qualifying, the NLS 4 and NLS 5 winners were out. Daniel Harper lost control of the BMW M6 GT3 and slapped into the guardrail. The car too badly damaged to be repaired in time for the start. 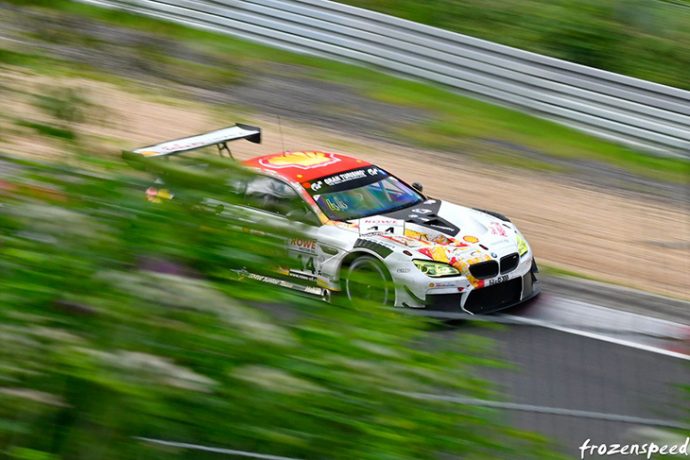 After second place in NLS 5, the HRT Bilstein AMG only finished ninth on Sunday. For team boss Hubert Haupt as well as Manuel Metzger and Patrick Assenheimer, who had improved by four places to third at the start, the race for a win was over just a few minutes later. Because there was contact in the AMG-Arena with the Ferrari 488 GT3 of the WTM powered by Phoenix team piloted by Jochen Krumbach. Serious consequences, because a completely bent tailpipe of the exhaust caused a considerable loss of power. This meant that another trio that had been on the podium the day before was out of the running for victory early.

Klaus Ableben, sharing the #30 Frikadelli Porsche with Martin Ragginger after a dash Fromm Monz where he had raced in the Michelin Le Mans Cup, finished a very creditable 7th. 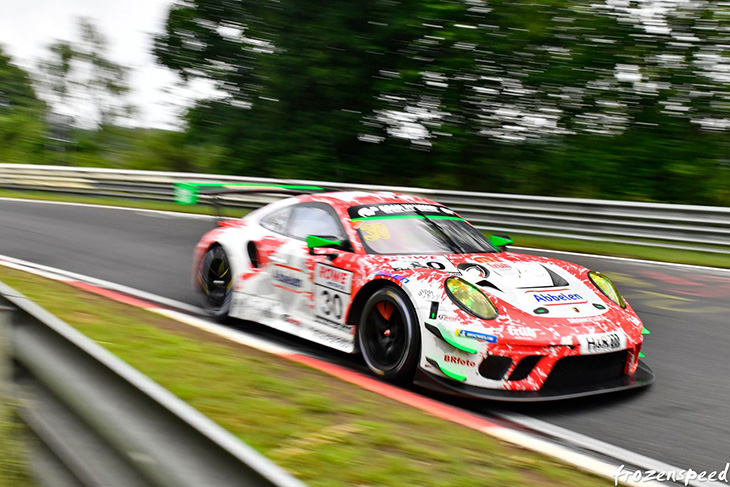 In the SP9 Pro-Am and the SP9 Am there was an unchanged picture at the top compared to Saturday: Lorenzo Rocco, Patrick Kolb, Mattia Drudi and Milan Dontje won again in the Audi R8 LMS GT3 from Lionspeed by Car Collection Motorsport, in SP9 Am the serial winners Janine Shoffner and Moritz Kranz were there again.

The Adrenalin Motorsport Team Alzner Automotive with Philipp Stahlschmidt, Christopher Rink and Daniel Zils won for the third time this season in the VT2 class with 19 cars started. In Cup 3, the leaders in the overall ranking of the NLS, Daniel Blickle, Tim Scheerbarth and Max Kronberg from W&S Motorsport, finished second with the Porsche 718 Cayman GT4 CS due to a 3:05 minute penalty for a speed violation in one Code 60 zone. Ben Bünnagel, Nico Otto and Nick Wüstenhagen from FK Performance Motorsport benefited from this. In the overall standings, the reigning champions of Adrenalin Motorsport Team Alzner Automotive, Danny Brink and Philipp Leisen, who drive with Christopher Rink, moved up to first place with 47.60 points in the BMW 325i with 0.36 points ahead of Blickle / Scheerbarth / Kronberg.

The Nürburgring endurance series is now taking a two-month summer break. On September 11th, the next highlight of the season is on the programme with the ROWE ADAC 6h Ruhr-Pokal race.