The first opportunity for the FIA WEC paddock to get an insight into the Peugeot 9×8 programme came this afternoon with a well attended media conference at Monza where the top team of Peugeot Sport reveals the 9×8 Concept car and gave some insight into the timeline set for the programme. 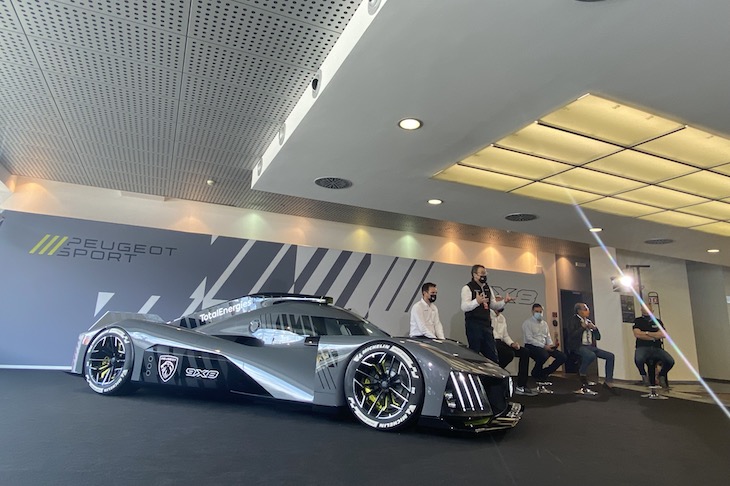 More of that later but there may be yet more excitement to come from the combination of a live Peugeot Sport programme, the newly confirmed full convergence of a top class featuring both LMH and LMDH cars, and the place of Peugeot within the massive Stellantis Group.

Stellantis includes Peugeot, Citroen, Alfa Romeo, Fiat, Maserati, Chrylser, Jeep and Dodge amongst its portfolio of brands and when asked by DSC to offer an opinion on the possibilities now offered by full convergence, Jean Marc Finot, Senior VP of Stellantis Motorsport, far from shutting down the question confirmed that:

“Right now we are entirely focused on the FIA WEC, testing and understanding this car ahead of our debut in 2022.”

Further asked on the timing of that debut Finot was again very direct:

“We will race when we have both the performance and reliability that we want to have confidence in finalising the homologation. After that we will have the homologation locked in for several years so it is important to present the very best car we can before taking that step.”

Asked specifically on Le Mans he re-iterated: “The programme’s progress will determine whether we will commit to Le Mans in 2022. I hope we can be there, but the key is the longer view and the ultimate competitiveness of the car.”

RACER’s Marshall Pruett adds this – that a part- or full-time IMSA campaign with Dodge badging is the most likely outcome of those discussions if they come to fruition.

Added into the mix it should be remembered that outside of its great history in GT competition, Dodge is no stranger to prototypes, having commissioned a factory LMP1 program which raced at the 24 Hours of Le Mans in the early 2000s under the Chrylser brand.