It was quite the hot summer afternoon at Motegi. The ambient temperature had reached ~33°C in time for the start of qualifying at 14:00 local time. But even the risk of heat stroke wasn’t going to deter fans from seeing the action unfold as Super GT returned for the first time since the delay of “Round 3” at Suzuka Circuit from May to August. As a result, this “Round 4” is now actually the third race of the season!

In the GT500 class, the silver and orange Stanley NSX would be unstoppable during both sessions as they led the way for Honda at their home venue. Participating in his first qualifying session since returning from illness, Makino set the top time in Q1 with a lap of 1’38.001. The #16 Red Bull Motul Mugen NSX-GT of Toshiki Oyu finished second, to make it a Honda 1-2 in the first stage of qualifying. Four Toyotas, three Hondas, and one Nissan progressed into Q2. 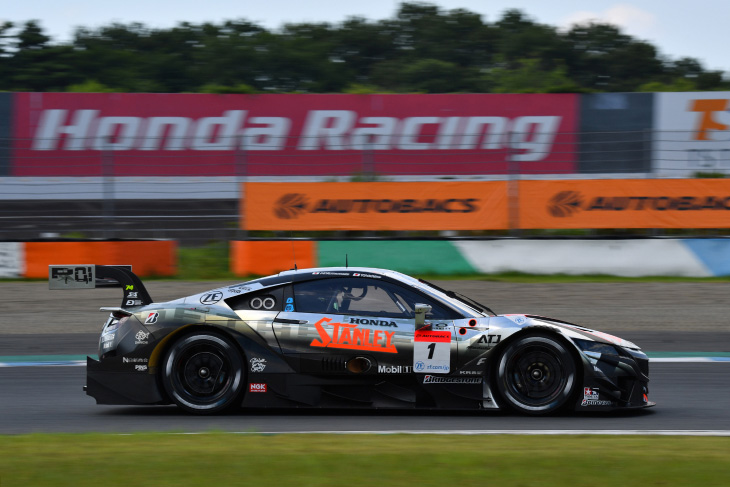 The laps that would determine the pole winner came in the final minute of the ten-minute Q2 session. Seeking back-to-back GT500 pole positions, Ritomo Miyata in the #19 WedsSport Advan Toyota GR Supra put in a blistering lap of 1’37.549 to take provisional pole position. But Yamamoto was determined to pick up where his young co-driver left off in Q1. He set the fastest second and fourth sector times to snatch the top spot with a 1’37.498, 0.051s ahead of Miyata.

This was a true home grown pole position for Honda and their ace driver Yamamoto. The GT500 class Honda NSX-GTs are all built ~40 kilometres northwest of Motegi at the HRD Sakura facility. But Twin Ring Motegi is also Yamamoto’s home track – he grew up just ~30km west of Motegi in the city of Utsunomiya. 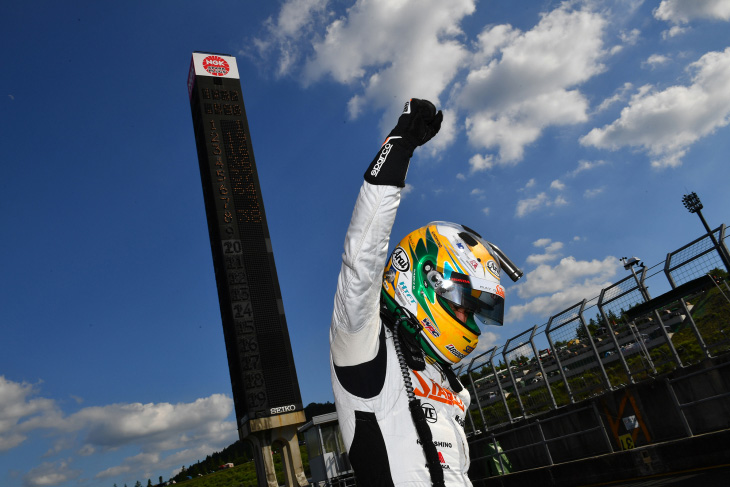 “Personally, [as a native of Tochigi Prefecture] I have been competing here for 11 years, but this is my first pole position at Motegi, so the joy of this pole position is nothing less than that of a race win, and I want to express my gratitude to the whole team,” said pole-sitter Yamamoto. “As a professional, I will be working as one with the whole to get a win in tomorrow’s race.”

This is the first pole position for both Yamamoto and Team Kunimitsu since the 2018 round at Sportsland Sugo, and the third pole position credited to Yamamoto in his career.

“We came into this season with new team members, including new engineers, so there were new things to get used to at first,” Yamamoto continued. “But we have managed to come to this point where we are able to work well together, thanks in good part by help from our former engineers. I believe that today’s pole position result was not due just to me and Tadasuke, but to the efforts of everyone on Team Kunimitsu and HRD Sakura.” 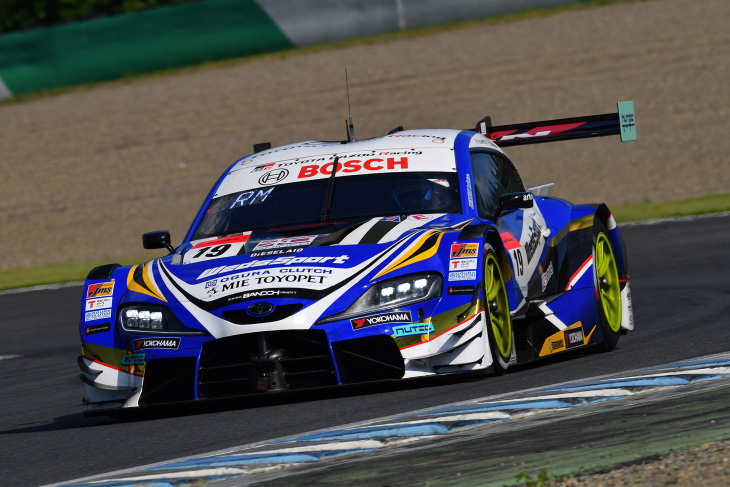 Miyata’s time in Q2 may have been beaten to pole position by fractions of a second, but he and Yuji Kunimoto will still start from the front row after qualifying in second place. The WedsSport Supra will be hoping for a better result than they had at the Fuji 500km, where they sank from the top spot as soon as the green flag was waved. 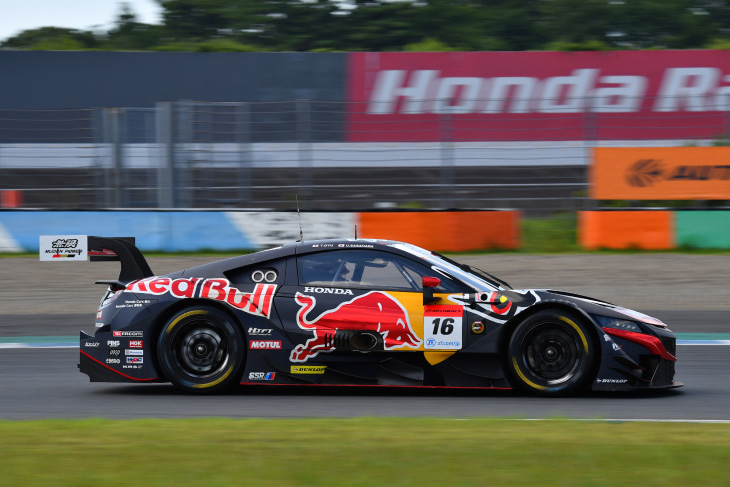 Sophomore Ukyo Sasahara put the Red Bull NSX third on the grid for Sunday’s race with a lap of 1’37.768, securing Team Red Bull Mugen’s best grid position since winning the pole at Buriram in 2018. 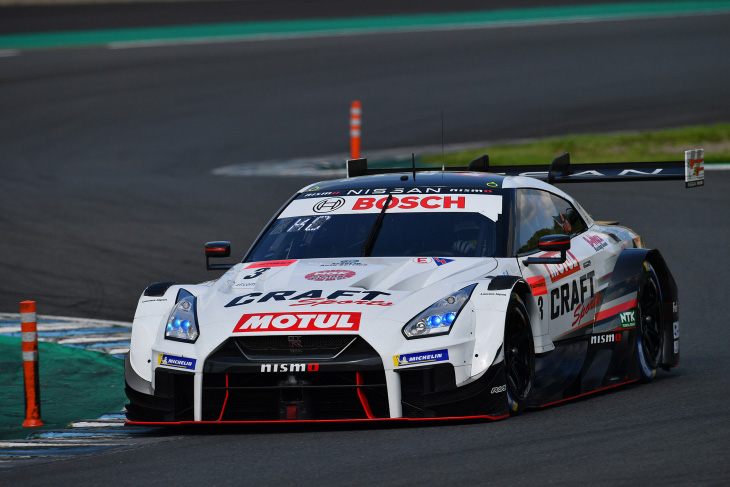 The #3 CraftSports Motul Nissan GT-R (Kohei Hirate/Katsumasa Chiyo) was the quickest in the morning’s Practice session, but only just managed to advance to Q2 and ended up qualifying seventh, ahead of the #38 ZENT GR Supra (Yuji Tachikawa/Hiroaki Ishiura) in eighth.

The top two teams in the GT500 standings suffered with the extra Success Weight, including a Stage 2 fuel flow restrictor for the #14 Eneos X Prime GR Supra (Kazuya Oshima/Kenta Yamashita), and a Stage 1 fuel flow restrictor for the #17 Astemo NSX-GT (Koudai Tsukakoshi/Bertrand Baguette). The Eneos Supra qualified down in 13th, ahead of the Astemo NSX in 14th – leaving both teams with work to do in order to stay at the head of the championship table. The other upset from GT500 Q1 was prohibitive favourites Tomoki Nojiri and Nirei Fukuzumi missing the cut in their #8 ARTA NSX-GT, qualifying ninth. 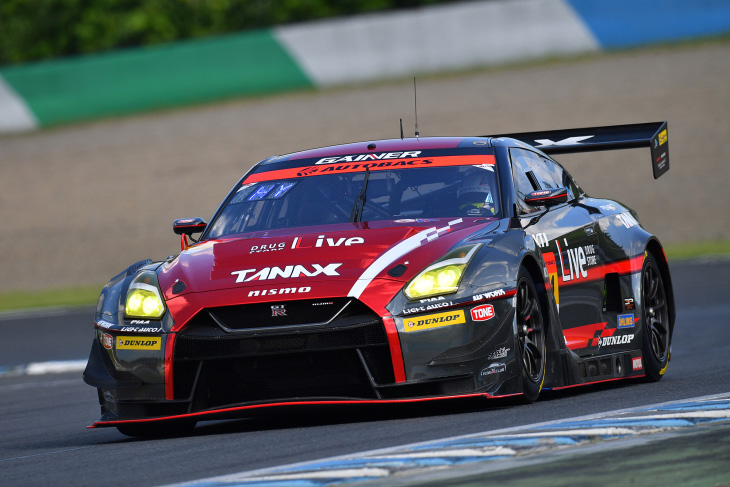 For the second time in three races this season, the #11 Gainer TanaX Nissan GT-R NISMO GT3 of Katsuyuki Hiranaka and Hironobu Yasuda will start on pole in GT300. It was 2008 GT300 Champion Yasuda who took top honours in qualifying for the first time in his Super GT career, following up from his co-driver Hiranaka who won the pole in the first round at Okayama.

Hiranaka led a Nissan 1-2 in Q1 Group A, just ahead of João Paulo de Oliveira in the #56 Realize Nissan Automobile Technical College GT-R. Yasuda was tasked with running in Q2, where he set the fastest time with two minutes remaining, clocking in at a 1’47.737. No other team could put together another flying lap to counter, giving the pole to Yasuda – his first in either class of competition, after his GT500 title in 2018, and nine full seasons in GT500 from 2009-2017. 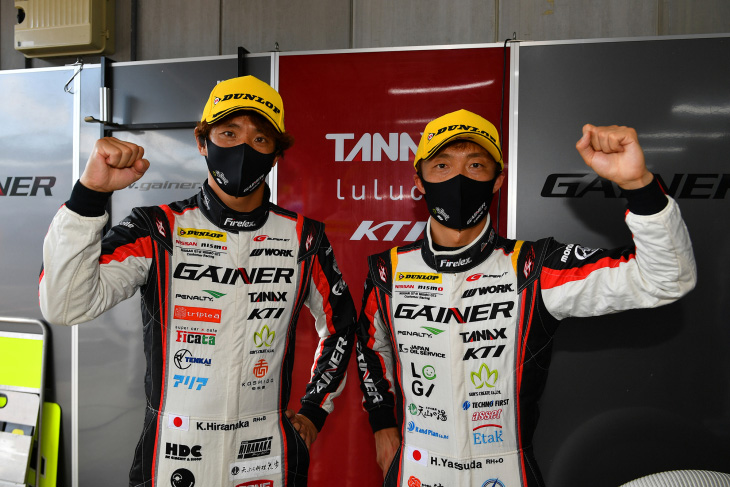 “Until now I have usually run in Q1 of qualifying,” said Yasuda. “This time, Hiranaka-san agreed to have me run in Q2 because I have usually run well at Motegi. But when he ran so well in Q1 and recorded the fastest time, it really put me on the spot and made me nervous before the start of Q2. But once I got out on the track, I was able to stay calm and run well and get pole position.”

“In tomorrow’s race, I want to give a performance that will be inspiring to everyone, so I hope everyone will be cheering for us.” The duo of Hiranaka and Yasuda should be a serious threat to win from pole, having won at Motegi in 2019. 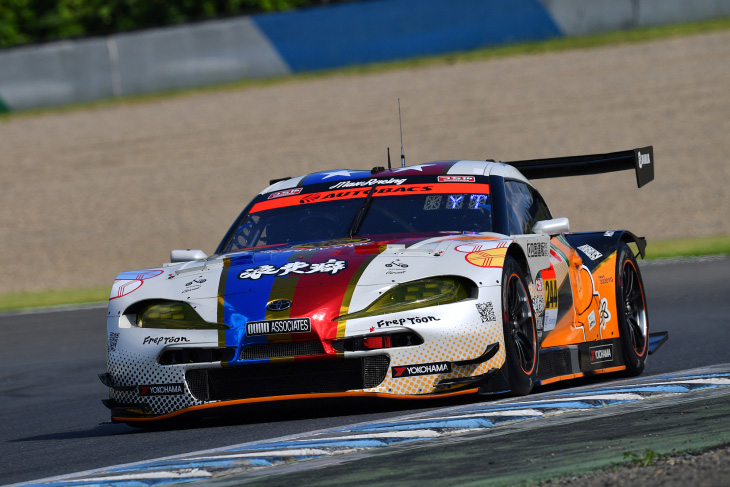 Max Racing scored their first-ever front row start in Super GT as the #244 Takanoko-no-yu Toyota GR Supra GT300 of Atsushi Miyake and Yuui Tsutsumi qualified a stunning second. Tsutsumi was less than two-tenths of a second away from snatching his first pole, as it turns out, another strong performance for the original GT300-spec GR Supra in 2021. 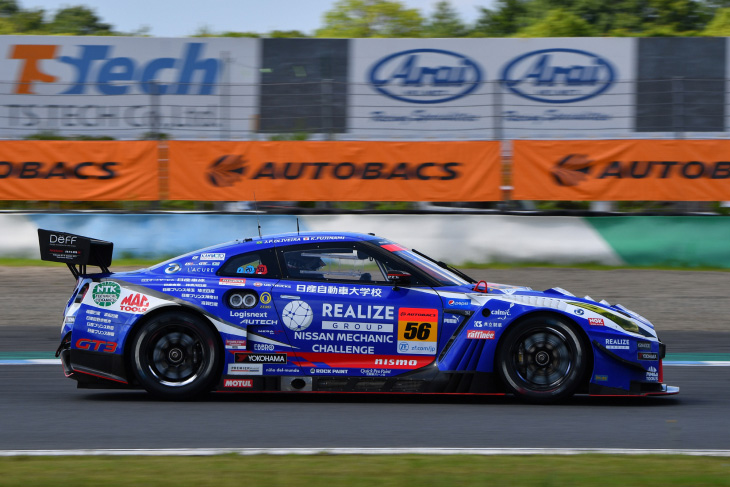 Kiyoto Fujinami picked up where teammate Oliveira left off and qualified third in the #56 Realize GT-R. The reigning GT300 champions did this despite a whopping 72 kilos of Success Weight on board – which should be cause for concern for quite a few of their rivals in the GT300 class!

The #7 Studie PLUS BMW M6 GT3 (Seiji Ara/Tomohide Yamaguchi) qualified 13th but deserves a special mention after 2004 Le Mans winner Ara led Q1 Group B with the fastest time across both groups in Q1 – the first time that the ageing M6 GT3 led a Super GT session since 2018.

Further back in the GT300 grid, there were some teams that surprisingly missed the cut in Q1. While the number 11 Gainer GT-R took pole, the #10 Gainer TanaX with Impul GT-R (Kazuki Hoshino/Keishi Ishikawa) on the same Dunlop tyres couldn’t crack the top eight in Q1 Group B, and will start 21st – just ahead of Fuji 500km winners Hiroki Yoshimoto and Shunsuke Kohno in the #60 Syntium LM Corsa GR Supra, who qualified 23rd after struggling with 69kg of Success Weight.