Mercedes-AMG Team HRT man Maxi Götz became the fourth winner from as many races in the 2021 DTM at the Lausitzring on Sunday afternoon.

It marked the first win in the Series for Mercedes-AMG Team HRT too as Götz who already raced in DTM in 2015 and 2016, came out on top in a thrilling race, followed home by Red Bull junior driver Liam Lawson in his Ferrari and Kelvin van der Linde’s ABT Sportsline Audi.

That result leaves Kelvin van der Linde still in the lead of the DTM drivers’ standings at 69 points from Liam Lawson (65). Next up are Lausitzring race 1 winner Philip Ellis on 48 with Maximilian Götz on 46 points.

“For me, a childhood dream came true today. This DTM race win means a lot to me,” Maximilian Götz said. “I would like to thank Hubert Haupt for having been given this second chance in DTM. Hubert Haupt is living and breathing DTM, so I am even more proud to have secured this maiden win for his team.” 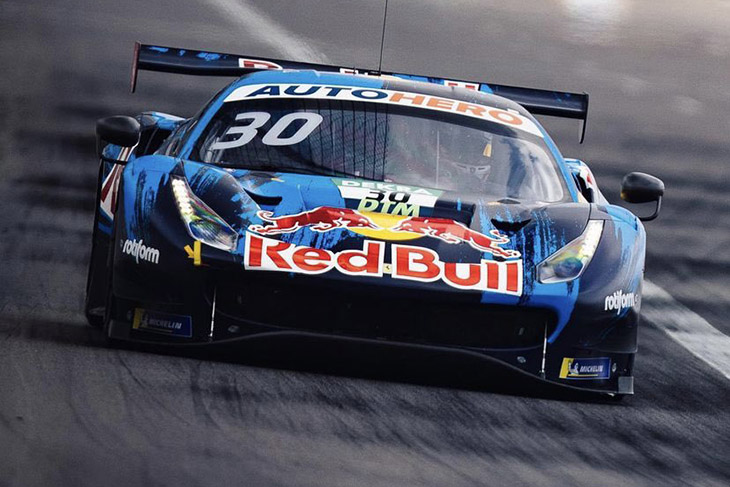 Götz’s win came in part as a result of problems for erstwhile race leader Kelvin van der Linde and a mistake by second-placed Liam Lawson. When Lawson came into the pits for his mandatory tyre change after eight laps, he stalled as he drove off and lost time. “I can only apologise to the team for this mistake,” the New Zealander said. On lap 27, there was drama for Kelvin van der Linde. His ABT Audi suddenly slowed down. “The car switched off, I had to do a complete reset. Thankfully, I only lost two places,” van der Linde reported.

Altogether, it was an entertaining race. Philip Ellis, the race winner on Saturday, initially defended the lead from pole, but Lawson in the Ferrari worked his way past Ellis’s Mercedes-AMG with a fine opening lap move.

Kelvin van der Linde also got closer and closer to Ellis and overtook him on lap three.

Mike Rockenfeller with the ABT Audi and last year’s runner-up Nico Müller with the Rosberg Audi led the field for a long time, but eventually turned into the pit lane for fresh tyres.

From then on, Götz led from Lawson and Kelvin van der Linde. Behind the trio, there was a train of seven race cars with Ellis followed by a charging Sheldon van der Linde ahead of fellow BMW driver Marco Wittmann, Daniel Juncadella and Mike Rockenfeller. Lucas Auer and Nico Müller rounded out the top ten.