François Perrodo improved on his second place in the first race by going one better in the second Masters Endurance Legends race at Silverstone, the Frenchman surging past Shaun Lynn’s similar Peugeot 908 to make it a diesel-powered 1-2 at the Classic. In third,  Jamie Constable reeled off a tremendous recovery drive after his Pescarolo-Judd 01 was left stranded on the grid and was forced to start from the pitlane.

“I thought I was going to be content with second place because Shaun was so fast, I couldn’t see him anymore”, said Perrodo. “And somehow in the second stint, I managed to fight back and get first place, so really happy!”

“No, I’m 58 years of age, getting a bit old, and I was sleeping a bit in the second stint…”, said Lynn about his slowing pace in the second part of the race. “The car was fantastic!” 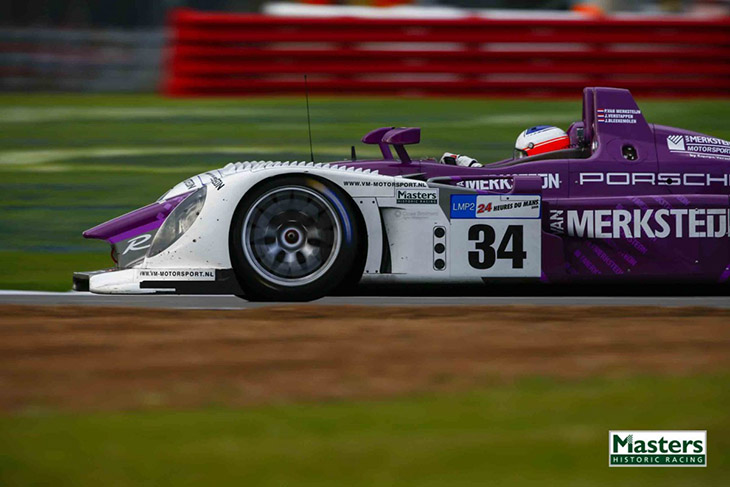 Constable narrowly held off Emmanuel Collard in the P2-class-winning Porsche RS Spyder, the French star – purposely handicapped by a professional-driver pitstop time penalty – connecting a string of fastest laps of the race to get within 0.157 of Constable at the finish. 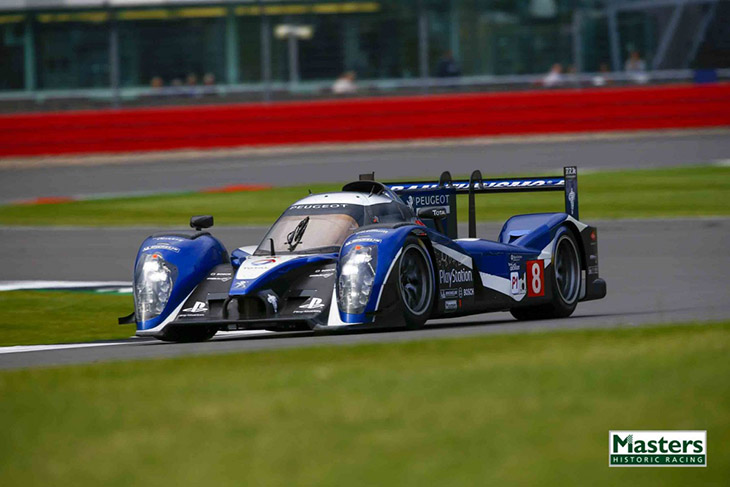 Greek Peugeot 90X driver Kriton Lendoudis took fifth while Max Lynn in the BR Engineering-Nissan BR01 took sixth and second in the P2 class, ahead of James Littlejohn in the Gibson 015S. 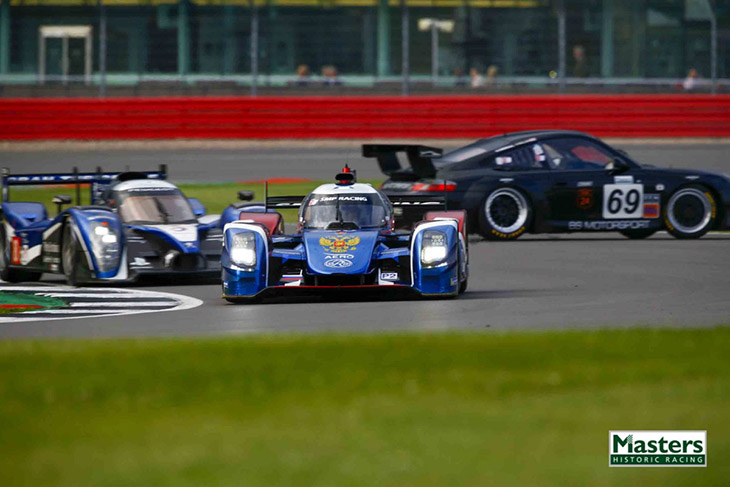 “I wasn’t sure [where Collard was], but I was going to driving flat-out during the whole race anyway and see where I end up”, said Constable. “I just kept my foot in, and here we are, third!”

On a dry track, Steve Tandy took over the Lola-Mazda B12/60 he entrusted to Rob Wheldon the day before, and with great effect, as Wheldon won, handing Tandy pole position for the second race. From third on the grid, though, Constable was unable to leave the dummy grid, with Collard stuck behind him. After reversing, the Frenchman found his way past the Pescarolo to assume his rightful place in the order.

Initially, Tandy got the edge over Perrodo but the Peugeot was past before Brooklands. Soon, Lynn was up into second to make it a diesel 1-2, with Collard following through on the next lap. With Tandy dropping back, Lendoudis in the third Peugeot was up into fourth on lap 3, now trailing Perrodo by 16 seconds. On lap 4, however, Lynn took advantage in the Village and Loop section to take the lead, while Matt Wrigley was forced to pull over in Christophe d’Ansembourg’s ex-Didier Theys/Mauro Baldi Dallara-ORECA DO-05. 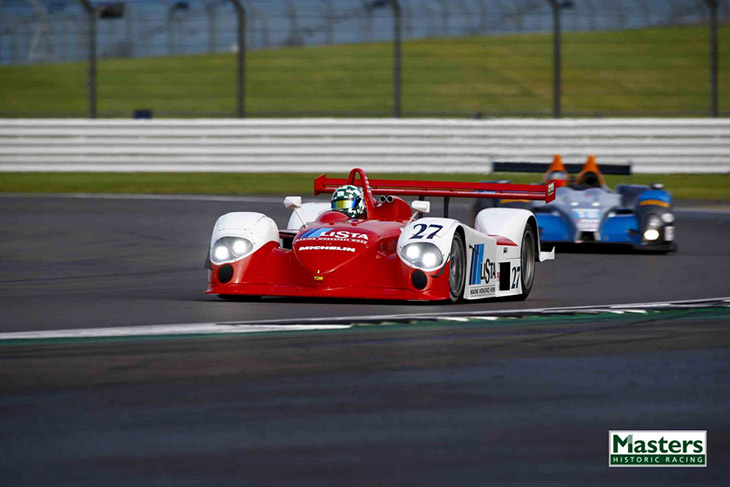 Behind the five leading cars, Frieser held his own in sixth in his new Zytek 09S, ahead of Max Lynn’s BR01 and David Brise in the Lola-Judd B09/80, those two in second and third in the P2 class, as they fought James Littlejohn’s Gibson 015S and the resurgent Pescarolo of Jamie Constable. Among the GTs, Olivier Tancogne in the Vitaphone-liveried Saleen S7R led from Michael McInerney in the Mosler MT900R, with Tom Jackson’s Porsche 997 GT3 RSR Grand-Am in third.

At the front, Lynn Sr eked out a 2-second lead over Perrodo, with Collard four more ticks behind his friend and countryman, as Lendoudis and Tandy kept quarreling over fourth place, both some 22 seconds behind now. Meanwhile, Brise had emerged in sixth ahead Frieser, Littlejohn and Lynn (M.), the Canadian in the Zytek fighting the three P2 cars, but on lap 8, Frieser dropped away from the pack to retire with gearbox issues – and moments later, Tandy was seen falling back from Lendoudis to limp back to the pits with an engine fault.

More pitstops soon followed, including Tancogne in the GT-leading Saleen, but Lynn remained in control in front, now leading by six seconds from Perrodo, with Collard a further six seconds behind. On lap 11, Perrodo came in, and Collard and Lendoudis were in next, and then, at the last opportunity on lap 13, the leader finally entered the pits for his mandatory stop.

All stops done, Lynn still led Perrodo, and with an increased margin, while Constable’s comeback drive came into true fruition after an early stop got him into third place. Lendoudis was fourth ahead of Collard, now in fifth because of his longer ‘elite driver’ stop, with Max Lynn and David Brise in sixth and seventh overall as well as second and third in the P2 class. 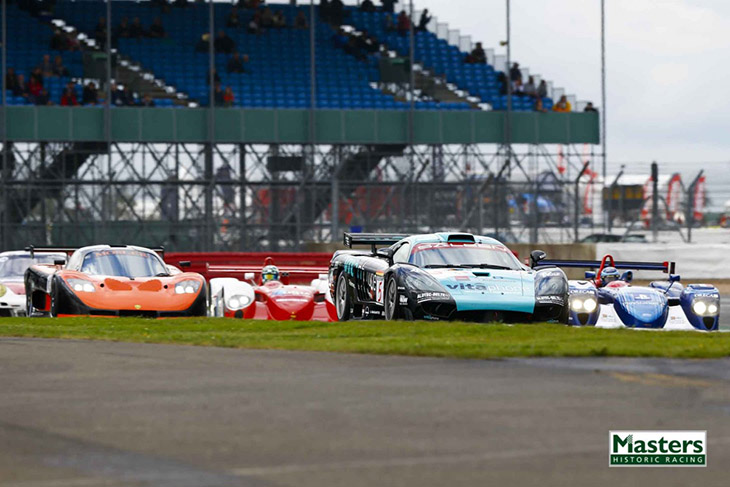 In GTs, Tancogne still headed the field, now with the Craig Davies/Ron Maydon Ligier-Nissan JSP3-15 between the Frenchman’s Saleen and the Mosler MT900R started by Michael McInerney and now occupied by Aaron Scott, who himself was chased hard by Colin Sowter’s Ferrari 458 GT3. However, now fourth in class, Ben Clucas in the Porsche 996 GT3 RSR started by Marcus Jewell was catching all of them.

With ten minutes still to go, Perrodo starting closing down the gap to Lynn, as the race leader suddenly wasn’t lapping at his customary level anymore, and on lap 17, going into Brooklands, the Frenchman breezed past the slightly limping fellow Peugeot. Constable in the Pescarolo had done well to get back up into third but was 40 seconds on the leaders while maintaining a 15-second gap to Collard, who had meanwhile usurped Lendoudis for fourth. Further back, James Cottingham was charging up the field in the Dallara SP1 started by Max Girardo, and was now in eighth but within striking distance of Littlejohn in seventh and Max Lynn in sixth. David Brise held ninth while Mark Higson in the ORECA-Nissan 03 first appeared in the top-ten.

Tancogne continued to lead the GTs by a country mile, now over Clucas in second and Sowter in third, with Scott having dropped down to fourth. 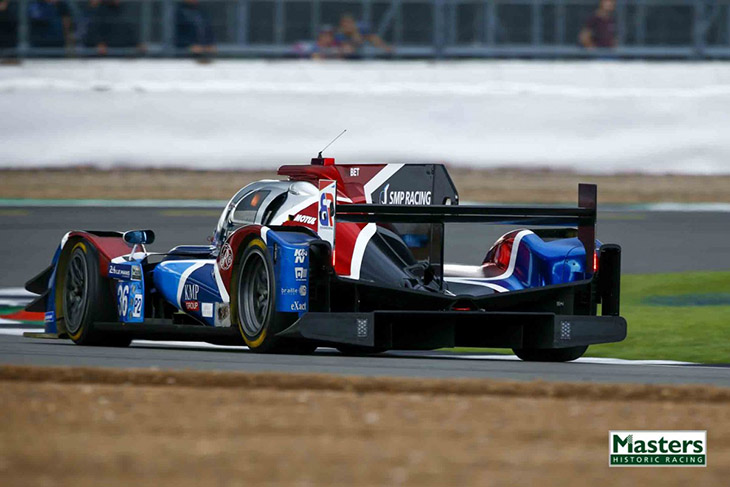 As the final minutes ticked down, Perrodo built his lead over Lynn to win by 9 seconds. Constable only just held on to third despite Collard reeling off fastest laps of the race towards the end. Lendoudis was fifth while Max Lynn in the BR01 took second in P2, ahead of the Girardo/Cottingham P1 Dallara, while Brise and Littlejohn fought hard over third in P2, the latter prevailing in the end.