Rob Wheldon overcame an ‘elite driver’ pitstop time penalty to prevail in the first Masters Endurance Legends race at Silverstone, his Lola-Mazda B12/60 setting the fastest race lap ever recorded at the Classic during his chase of François Perrodo’s Peugeot 908. Wheldon’s 1.45.277 time in Steve Tandy’s Lola was among a string of hot laps that helped him take the final hurdle of the Frenchman’s powerful diesel-engined prototype. Meanwhile, Jamie Constable pushed through to claim third in the Pescarolo-Judd 01 ahead of Shaun Lynn in another Peugeot 908.

“I’ve had such a good time”, said an elated Wheldon. “Thanks to Steve Tandy for the opportunity and massive efforts from Pete Chambers and the lads. It’s just been a hell of an experience, and to come away with a trophy to reward them for what they have done, it’s just phenomenal. I enjoyed myself every lap of the way.” 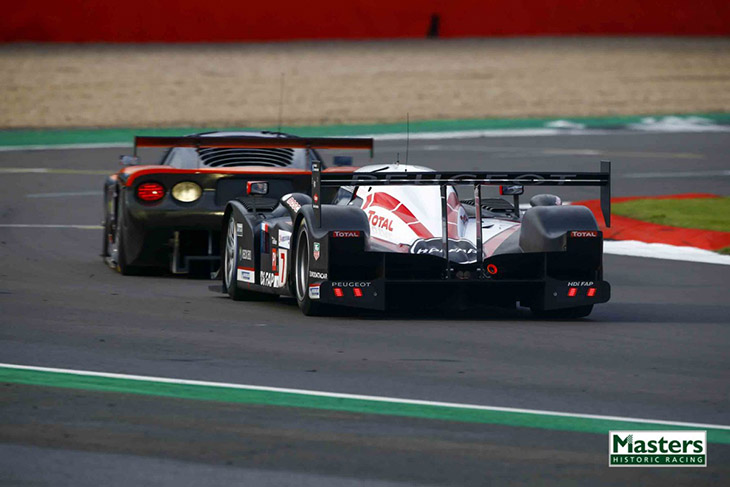 “He was way too fast for me”, said a magnanimous Perrodo. “I’ve really enjoyed it, it’s a great event. It was my first race in the Peugeot so I’m still discovering the car, and I can say it’s the only diesel that’s worth driving!”

“I’m just happy that we managed to finish”, said Constable. “The car’s been in the workshop for six months, first time out, so really, really happy.” 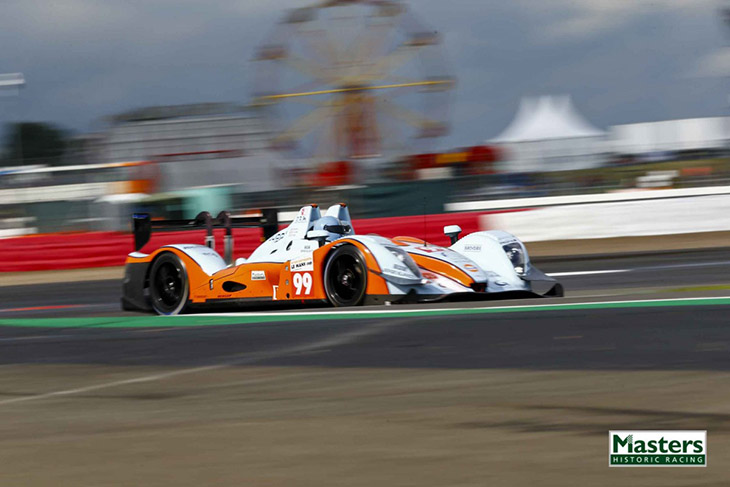 Polesitter Emmanuel Collard led early on in the Porsche RS Spyder before seeing Wheldon move past and fighting Perrodo for second, but his elite-driver time penalty at the stops dropped him down to fifth. The Frenchman still ruled in the P2 class, finishing well ahead of the BR01s of Max Lynn and Jason McInulty/Chris Perkins. 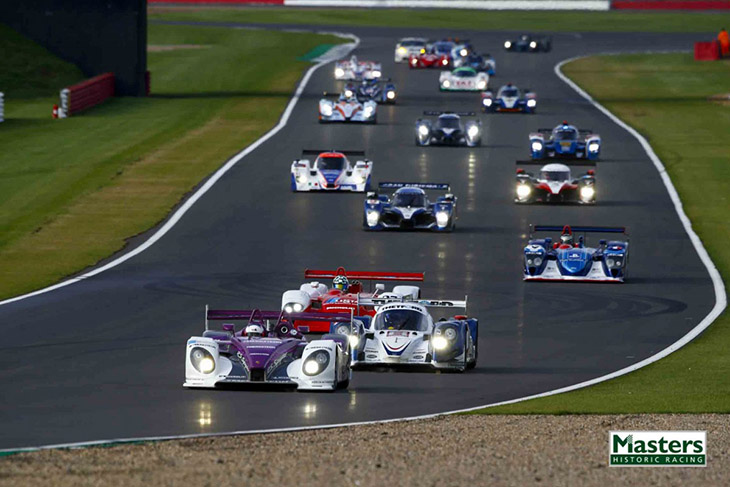 In GTs, Marcus Jewell and Ben Clucas won from the front in their Porsche 996 GT3 RSR, but the Mosler MT900R of Michael McInerney/Aaron Scott fought them all the way. In third, Olly Bryant came through from the back in his Trans-Am Roush Mustang GT-S1 to be fastest of the GT1 drivers. 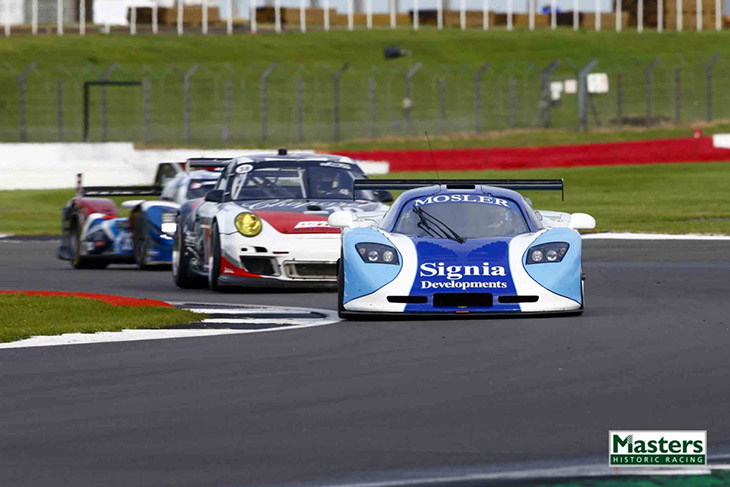 In the first truly dry race of the day, the 30-car field started in single file behind the safety car, the drivers still unacquainted with the grip offered by a bone-dry track after a very wet qualifying. Failing to lead the field away, however, was the pole-sitting Porsche RS Spyder of Emmanuel Collard, while James Littlejohn’s Gibson 015S was left behind in the assembly area as well. Towards the green flag, though, Collard hurried to assume his position at the front of the field.

After two laps behind the safety car, Collard led away from Wheldon, Wrigley and Cottingham, with the two Peugeots of Shaun Lynn and Perrodo behind. Brise was sixth ahead of Max Lynn in the BR01 and Kriton Lendoudis in the third Peugeot, as Constable in the Pescarolo 01. In 17th overall, Marcus Jewell’s Porsche led the GTs ahead of the Michael McInerney in the first of the Moslers.

Into lap 2, Wheldon sized up the leading Porsche and swept past into Abbey to put the Lola-Mazda into the lead, with Wrigley in the ex-Doran Lista Dallara now eyeing Collard for second. Behind the top-three, Perrodo picked off Lynn (S.) and Cottingham to move up into fourth, while Constable dealt with Lendoudis to take ninth before relieving Lynn (M.) of P8.

Setting a new fastest lap of the race, Wheldon opened up a 3-second gap on Collard, who was keeping Wrigley Jr at bay, but Perrodo was closing up on both with the fastest lap on lap 5. The first ten minutes of the race gone, the Frenchman diesel-powered his Peugeot past Wrigley’s older Dallara. Constable’s rise, meanwhile, continued with the Pescarolo now moving up into seventh at the cost of David Brise in the Lola B09/80.

In P2, Collard was in the lead, obviously, with the BR01 of Max Lynn in second and David Brise in third, while in GTs, McInerney had moved ahead of Jewell to take the class lead, with Tom Jackson in the Grand-Am Porsche holding a brief watch in third, but next time around Olly Bryant in the Roush Mustang moved ahead of Jackson.

On lap 8, Perrodo tried a lunge past Collard into Stowe but had to bail out with a lurid slide, and now had to do it all over again. Both Frenchmen, however, now trailed Wheldon by ten seconds. On the next lap, Perrodo got the move made, and was straight into the lead as Wheldon was the first to pit, along with McInerney and Jackson, the pair handing over to Aaron Scott and John Cockerton respectively. Soon the pitlane was a busy place, with Perrodo, Collard, Wrigley, Max Lynn and Lendoudis all joining them.

Collard and Wheldon being elite drivers forced to make a longer stop, the Porsche RS Spyder and the Lola-Mazda now handed Perrodo’s Peugeot a consummate lead, as the late-stopping Shaun Lynn now also came in for his mandatory stop.

Perrodo now led Wheldon by ten seconds but the Lola was flying – his 1.45.933 lap was the fastest lap ever recorded at the Classic. Constable had moved up into third, leading Lynn Sr by 14 seconds and Collard by another 18 ticks, with Max Lynn in sixth as the second of the P2 runners, with Keith Frieser in the Zytek 09S having moved up into seventh, as the Canadian was chased by Lendoudis and Wrigley. 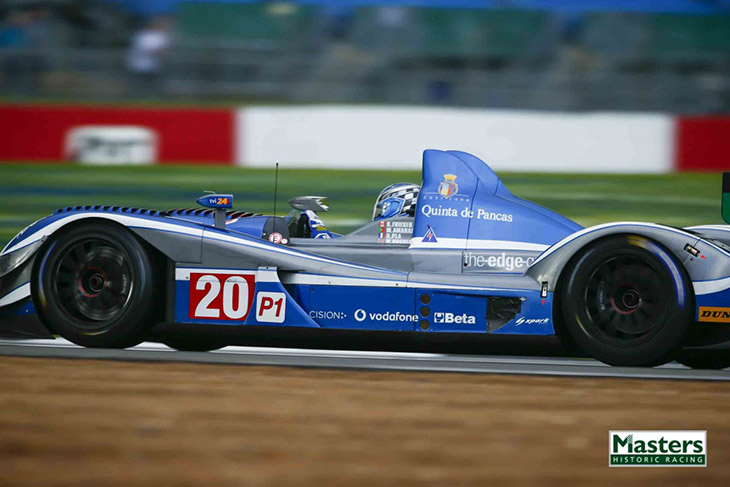 With five minutes to go, Wheldon further lowered his mark to close the gap to Perrodo down to six seconds, while in GTs, Ben Clucas in the Porsche started by Jewell led from Aaron Scott in the first of the Moslers, with Bryant in third and Olivier Tancogne in the Saleen S7R in fourth.

Wheldon was unstoppable, though, as he improved his best lap to 1.45.227 and now had the Peugeot well in sight – and very unusually so, went for it into Becketts, making the pass with a phenomenal move. Perrodo momentarily struck back on Hangar Straight but Wheldon made it through yet again out of Club, after which he was gone.

21 laps done, Wheldon was the victor despite his professional pitstop penalty to lead home Perrodo, Constable, Lynn Sr and P2 class winner Collard. Lendoudis and Frieser were up next, with Lynn Jr and the second BR01 of Jason McInulty and Chris Perkins in second and third in the P2 class, as Lukas Halusa took a surprise tenth overall in the invitational Porsche 962. In GTs, Clucas defended his lead againt Scott and Bryant while Xavier Tancogne in the Ferrari 458 GTE pipped Olivier Tancogne’s Saleen for fourth.