A race that started wet and almost dried out completely by the end featured two more title contenders on the overall podium after Barwell’s Adam Balon and Sandy Mitchell beat WPI Motorsport’s Phil Keen and Michael Igoe to second place despite the latter’s impressive final stint.

The GT4 rostrum was completed by Century’s Chris Salkeld and Andrew Gordon-Colebrooke who repaired some of the damage inflicted by their Race 1 DNF, and Team Rocket RJN’s Alain Valente and Michael Benyahia. Nick Halstead and Jamie Stanley took Pro-Am honours aboard Fox Motorsport’s McLaren.

The day’s second race couldn’t have looked any different to the first after a heavy rain shower soaked the track just before cars headed to the grid.

This time the Pros started where they qualified, but Dennis Lind was unable to hold on to the lead at Riches where Yelmer Buurman swept around the outside of Barwell’s championship-leading Lamborghini. 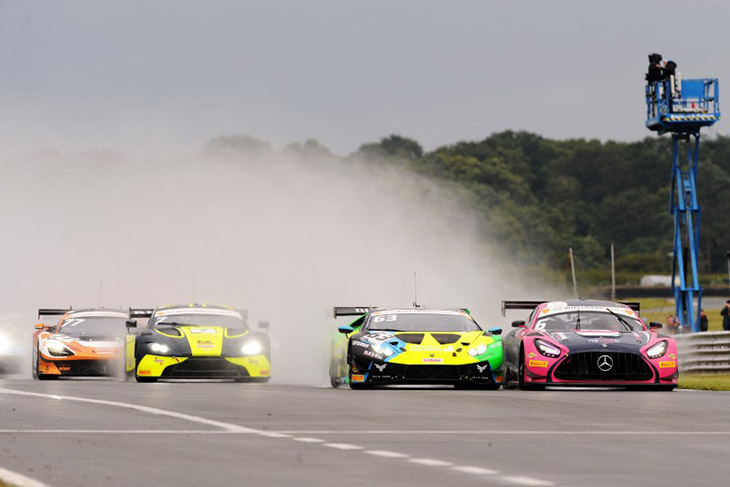 An early Safety Car period to recover Assetto’s stranded Ginetta GT4 also played out in RAM’s favour when Darren Turner’s delayed Aston Martin found itself between the GT3 leaders at the restart. Unable to overtake before the start/finish line, Lind was powerless to prevent Buurman streaking into a significant lead that extended to eight seconds before the GT3 pitstops.

However, by then it was Barwell’s other Lamborghini that held second place after Lind dropped behind Charlie Eastwood and Sandy Mitchell at the restart. The Race 1-winning Aston Martin couldn’t match either of the Huracans for pace, though, and was pushed back to fourth by two well executed moves before the pit window opened.

With neither of the top two serving Success Penalties, Ian Loggie and Adam Balon re-joined on the same lap still separated by eight seconds. The latter initially halved his deficit before RAM’s Mercedes-AMG re-established its advantage once fully up to speed. Balon closed back in as the track dried but it was too little, too late – Loggie taking the chequered flag 4.6s clear.

Balon was perhaps spurred on by WPI’s rapidly approaching Lamborghini, which stopped a lap before the rest of GT3’s main players. Phil Keen kept Jonny Adam honest over the opening stint as the championship stalwarts ran fifth and sixth, but the extra lap meant Michael Igoe was fully up to speed when Andrew Howard exited the pitlane just ahead. The positions switched on the run towards Wilson before the Lamborghini also relieved Leo Machitski of third.

All three had benefitted from Eastwood’s maximum Pitstop Success Penalty, which initially dropped the newly installed Ahmad Al Harthy from third to sixth. Like for like moves around the outside of Howard and Machitski on successive laps at Coram helped the TF Sport-run Aston Martin move back up to fourth, but that’s as far as it would climb after Igoe’s searing pace in the damp but drying conditions left WPI’s Lamborghini out of reach.

Indeed, Igoe set multiple fastest laps in his pursuit of Balon and Loggie whose advantage dropped from 24s to just eight over the final 25 minutes.

Al Harthy came home a relatively lonely fourth, while Howard hounded championship rival Machitski all the way to the finish.

Proctors Stewart and Lewis were seventh in Balfe’s McLaren and Paddock’s Bentley was restricted to eighth by a penalty for stopping after GT3’s pit window closed.

All of that leaves Machitski and Lind 6.5 points clear of Loggie/Buurman and Howard who are tied for second with three races remaining. Balon/Mitchell and Igoe/Keen have work to do at Oulton Park next time out if they’re to remain in title contention before the final round.

Will Moore and Matt Cowley excelled in difficult conditions to grab a first victory of the year for Academy Motorsport and Ford after both drivers contributed to a superb recovery following an early off. 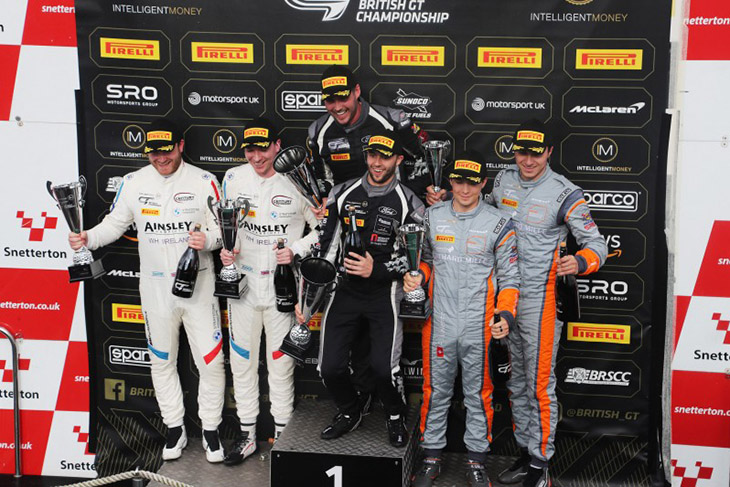 Assetto Motorsport’s Ginetta started the race on pole but was removed from the reckoning along with several other potential victory candidates on lap one when Charlie Robertson came together with Century’s #57 BMW, Ciceley’s Mercedes-AMG, Newbridge’s Aston Martin and Toyota Gazoo Racing UK’s Supra on the run out of Wilson hairpin. 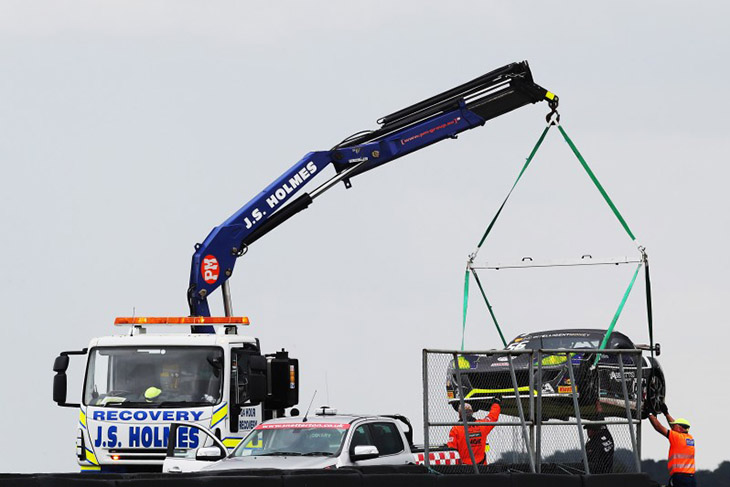 Once the order worked out behind the resulting caution, Snetterton specialist and Race 1 winner Jordan Collard emerged in front aboard Team Rocket RJN’s #2 McLaren, while Gus Burton escaped the contact with Robertson to run second ahead of Cowley.

Things then almost went south for Cowley whose grassy moment entering Palmer dropped the Mustang to sixth before the pit window opened.

But he would receive a reprieve in the form of the top two’s 10 and seven-second Success Penalties for finishing first and second earlier in the day. Indeed, the handicaps, as well as a stop-go penalty in Century’s case, would drop both cars out of victory contention.

Pro-Am’s shorter minimum pitstop times helped Fox Motorsport’s Nick Halstead initially lead once the pit cycle was complete, but the Bronze-graded driver immediately had a gaggle of Silvers on his tail, chief among whom was Will Burns who soon dived for the lead at Agostini. But almost as soon as the move was done the car was pinged with a stop-go penalty for making a marginally short pitstop. 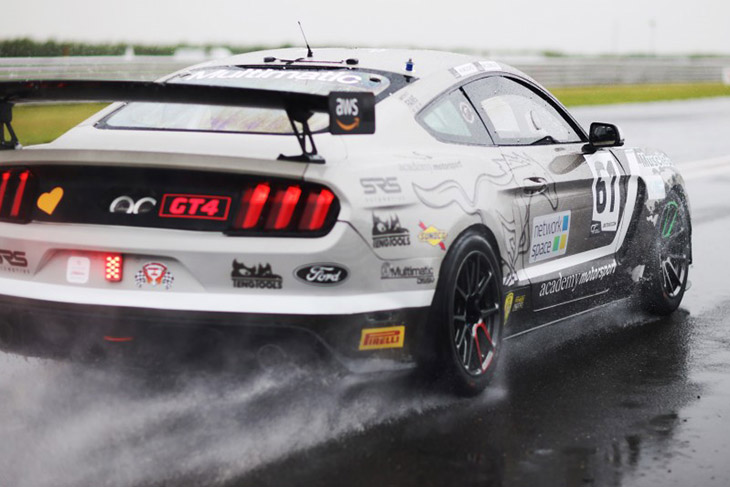 That left Halstead to defend from Moore, who had vaulted up the order thanks to a mighty in-lap from Cowley whose early stop also avoided the brief rain shower that restricted others, as well as slow stops for Team Rocket RJN’s armada. Moore reeled in the lead McLaren, slid past and made good his escape to victory.

Halstead put up a spirited fight but was unable to hold back the line of Silvers headed by Chris Salkeld’s #9 Century Motorsport BMW, which narrowed the championship gap to its teammates by finishing second.

The recovering Burns/Burton finished fifth, while Team Rocket RJN’s third McLaren and Balfe’s 570S were classified sixth and seventh in the final result.

Halstead and Jamie Stanley’s McLaren initially completed the top-six but survived a 40s post-race penalty in lieu of a stop-go for a pitlane infringement to still seal Pro-Am victory in eighth overall.

Next up it’s Oulton Park, which hosts two more 60-minute races on September 11-12. Burns and Burton’s current 44.5-point advantage provides them with a golden opportunity to seal the GT4 crown with a round to spare, the first time that will have happened since 2015.