With the 2021 campaign approaching its conclusion on both sides of the Atlantic, calendars have been finalised for Fanatec GT World Challenge Europe Powered by AWS, the GT4 European Series and the quartet of championships that run under the SRO America banner.

A strong commitment to continuity has remained at the heart of each category’s 2022 plans. This is certainly the case for Fanatec GT World Challenge Europe Powered by AWS, with nine of the 10 events that feature on this season’s schedule remaining in place next term. 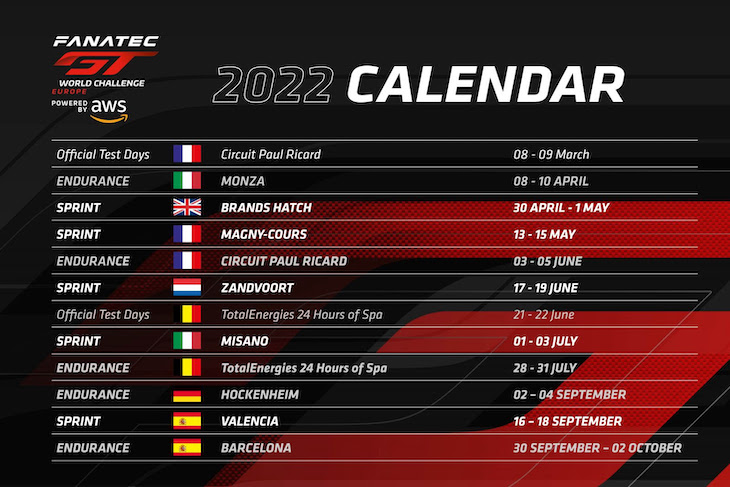 As ever, the Official Test Days at Circuit Paul Ricard will signal the start of the new campaign on 8/9 March, while the competitive action begins with a three-hour Endurance Cup race at historic Monza. Firmly established as the opening event of the season, the Italian track will play host to Fanatec GT World Challenge Europe Powered by AWS on 8/10 April.

Following a successful comeback last month Brands Hatch returns to its usual slot on the calendar (30 April/1 May), ensuring that the new Sprint Cup campaign launches at an especially popular venue. The short-format championship continues two weeks later at Magny-Cours (13/15 May), which is set to play host to a packed weekend of action that also includes French FFSA GT Championship. Endurance racing returns to centre stage next when Fanatec GT World Challenge Europe Powered by AWS travels to Circuit Paul Ricard, which will stage its popular 1000km contest on 3/5 June.

Zandvoort plays host to the third round of the Sprint Cup on 17/19 June, after which teams will travel directly to the Belgian Ardennes to undertake the Official Test Days for the 2022 TotalEnergies 24 Hours of Spa (21/22 June). A little over a week later the action will shift to the Adriatic coast as Misano stages the Sprint Cup for an eighth consecutive year over the weekend of 1/3 July.

Competitors will then have a final opportunity to prepare for the highlight of the season: the TotalEnergies 24 Hours of Spa. For its 74th edition the Belgian endurance classic will once again take place during the final week in July, with the competitive action set to run from 28/31 July.

Following a five-week summer break the Endurance Cup will resume at Hockenheim on 2-4 September. This represents the only new addition to the 2022 calendar, replacing the regular trip to Nurburgring, and will be the first time that the championship has visited the 4.6km circuit in Baden-Württemberg.

Two weeks later the Sprint Cup will conclude at Valencia (16/18 September), which remains part of the Fanatec GT World Challenge Europe Powered by AWS schedule following its maiden appearance this year. Spain is also the destination for the final outing of 2022 as Circuit de Barcelona-Catalunya maintains its status as the Endurance Cup finale on 30 September/2 October.

Following a campaign that has seen substantial grids at each event, the GT4 European Series will make only small changes for 2022. Once again the season will play out over six events alongside Fanatec GT World Challenge Europe Powered by AWS, each consisting of two 60-minute races. Four venues remain in place from 2021, while five of the six have featured on past calendars. 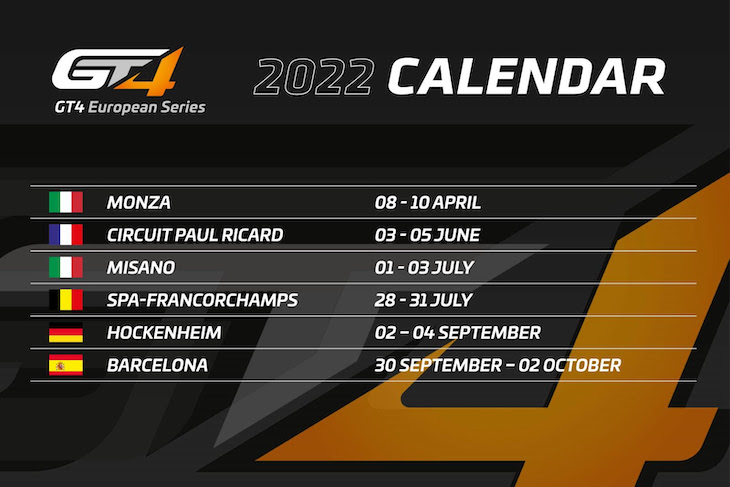 The championship kicks off at Monza on 8-10 April, returning to a track that has produced several thrilling GT4 encounters in recent years. Circuit Paul Ricard also remains in place (3/5 June), providing a home event for several French squads that compete in the championship.

For its third round the GT4 European Series will return to Misano (1/3 July), a circuit that it previously visited in 2020. After this the championship once again takes its place on the support package for the TotalEnergies 24 Hours of Spa (28/31 July), forming part of a packed schedule at the season’s marque event.

The 2022 campaign will conclude, as it does this year, with trips to Germany and Spain. Hockenheim represents a new addition (2/4 September), while Circuit de Barcelona-Catalunya (30 September/2 October) continues as the GT4 European Series finale following its maiden appearance this year.

The 2022 schedule has also been finalised for the quartet of series that compete under the SRO America banner, forming a high-octane package that takes in some of the most iconic road courses in North America. 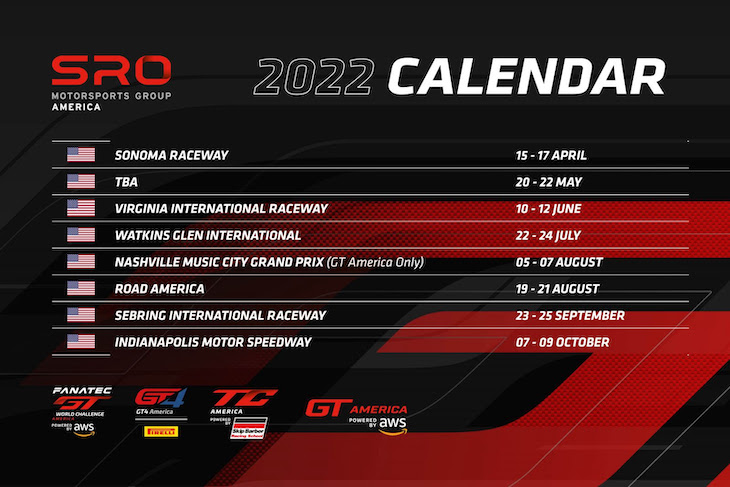 Sonoma Raceway retains its position as season opener, with the 2022 event set to run later than this year’s edition on 15/17 April. The second round of the campaign is planned for 20/22 May, with the location to be confirmed at a later date. Next up, Virginia International Raceway represents a firmly established venue and will stage its annual contest on 10/12 June.

Watkins Glen is another familiar and popular destination and will stage its race weekend on 22/24 July. The only divergence between the series comes on 5/7 August, when GT America Powered by AWS goes solo to join IndyCar on the streets of Nashville, forming part of the Music City Grand Prix.

All four categories will reunite at Road America on 19-21 August, while Sebring International Raceway takes the showdown to Florida on 23/25 September. The season will conclude in style at the most iconic racing venue in North America when Indianapolis Motor Speedway plays host on 7/9 October. Just as in Europe, there is considerable continuity on the American schedule.

With the first set of calendars revealed the 2022 season is beginning to take shape. Schedules for the full complement of SRO series across the globe will be revealed next month at Circuit de Barcelona-Catalunya, where Stéphane Ratel will give his annual press conference during the Fanatec GT World Challenge Europe Powered by AWS finale.