Sportsland Sugo, located in the wooded hills of rural Miyagi Prefecture about 25 kilometres south of Sendai, was the only venue to have been a part of the Autobacs Super GT Series calendar every year from its inaugural season in 1994, through 2019. That unbroken run of 26 consecutive seasons on the calendar ended in 2020: The ripple effects of the COVID-19 pandemic led Sugo to be dropped from the calendar due to logistical and financial concerns.

Even as Super GT returns to Sugo this week, the effects of the novel coronavirus pandemic can still be felt. Miyagi Prefecture has implemented “priority measures” for mitigating the spread of COVID-19, which will last through at least 12 September. As a consequence, attendance at the circuit will be limited to just 5,000 spectators per day.

For the approximately 1,850 team members, event staff, and media that will be at the circuit, all persons will not only be administered PCR tests at the circuit – as per the series’ protocol that was introduced since the start of last season – but they will also need to present proof of a negative Antigen test from within 72 hours of departing for the circuit in order to gain entrance.

This additional preventative step comes in the wake of two drivers testing positive prior to the most recent race at Suzuka Circuit: Kohta Kawaai of Saitama Toyopet GreenBrave was withdrawn prior to the start of the weekend. Hibiki Taira of K-Tunes Racing had withdrawn just 24 hours before the start of the weekend due to an illness that, unfortunately, turned out to be a positive test for COVID-19. Kawaai has been medically cleared to return to action, while Kazuto Kotaka will once again replace Taira in the #96 K-Tunes Lexus RC F GT3. 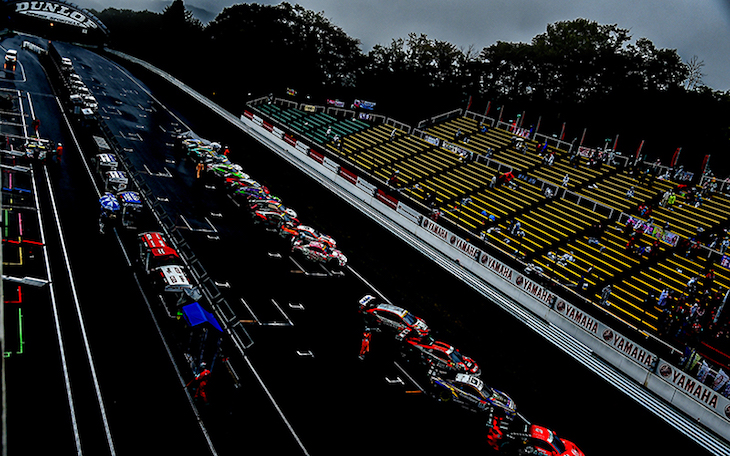 With these measures in mind, Sportsland Sugo’s return is a welcome sight for Super GT fans everywhere. Whether or not you believe in the superstition that demons live within the hills and forests surrounding this 3.586 kilometre circuit, there’s no denying this venue’s track record for producing incredible moments of calamity, punctuated by several photo finishes – including the closest GT500 finish in series history.

All throughout the last quarter century, Sportsland Sugo has remained mostly unchanged. It is still a tricky, undulating circuit that is deceptively fast and has very little runoff area for mistakes. One change that has been made since the last time the series visited Sportsland Sugo is a brand new paddock complex, and a wider pit lane which should eliminate the prospect of traffic jams such as the one in 2015. With the new pit lane, there is also a revised pit exit, where cars will blend onto the circuit at the outside of the third corner. This revision has already proven controversial earlier this year, in Super Formula and Super Taikyu – as top drivers such as Tomoki Nojiri and Nirei Fukuzumi have already voiced concerns about potential blind spots for cars re-entering the track.

That’s just one of a number of challenges that await the 43 teams across both classes this weekend. Sugo marks the end of the crucial “mid-summer triple,” a key juncture in the season that will solidify most of the championship contenders for the rest of the season to come. 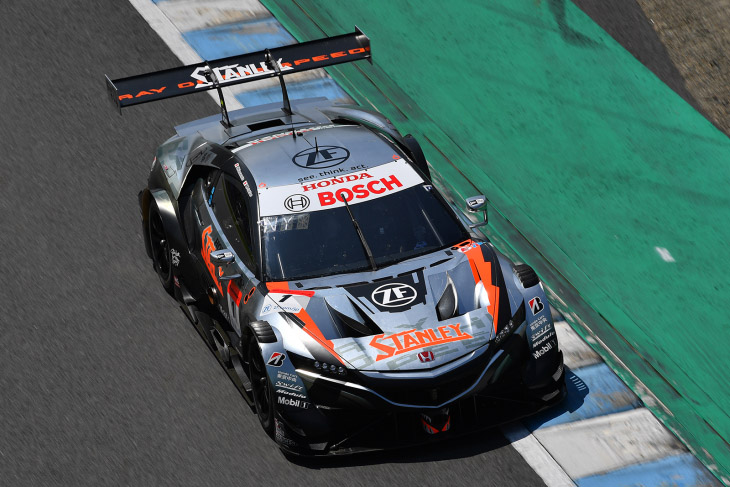 Reigning champion Naoki Yamamoto – a two-time winner at Sugo – currently leads the GT500 Drivers’ Championship for Team Kunimitsu. Tadasuke Makino’s contributions since returning at the Fuji 500km have been critical for the #1 Stanley Honda NSX-GT’s surge to the top of the Drivers’ and Teams’ Championships, with a win at Twin Ring Motegi and two other top-four finishes in the last three races.

But with 80kg of Success Weight – applied as 46kg of physical ballast and a “Stage 2” fuel flow restrictor – on the Stanley NSX-GT, it may be a challenge for Yamamoto and Makino just to finish in the top ten at Sugo. 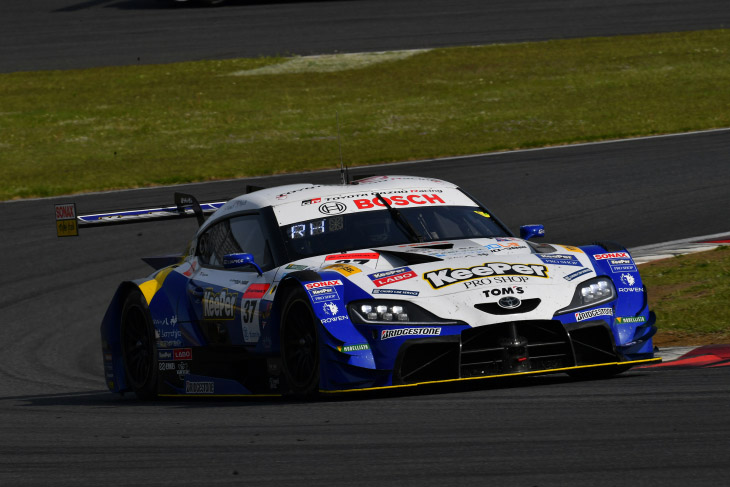 Yamamoto has scored points in every race so far this season, as has the #37 KeePer TOM’s Toyota GR Supra of Ryo Hirakawa and super-sub Sena Sakaguchi, who are seventh in the Drivers’ Championship (sixth, if you exclude Makino, who is mathematically ineligible for the title). Sakaguchi has been a revelation since stepping up to replace Sacha Fenestraz, while Hirakawa has pieced together another strong season that has Toyota Gazoo Racing on the verge of bringing the 27-year-old superstar up to their WEC Hypercar squad.

Three Toyotas are in the effective top six of the GT500 standings, with the #14 Eneos X Prime GR Supra (Kazuya Oshima/Kenta Yamashita) just five points back of Yamamoto, and the #36 au TOM’s GR Supra (Yuhi Sekiguchi/Sho Tsuboi) trailing by just eight points. Also in the mix from Honda is the #17 Astemo NSX-GT (Koudai Tsukakoshi/Bertrand Baguette), winners of the Fuji 500km. 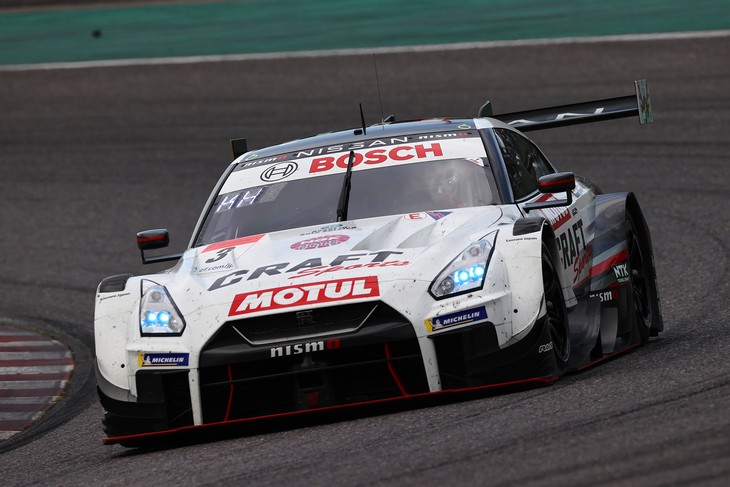 Another car that has scored points in every race this season is the #3 CraftSports Motul Nissan GT-R of Kohei Hirate and Katsumasa Chiyo. Recall that in 2019, Hirate and Fred Makowiecki won in soaking wet conditions at Sugo – giving Hirate his first win as a Nissan driver. Ironically, Hirate’s last win with Toyota – also at Sugo, in 2017 – denied his current co-driver Chiyo a first GT500 class victory that is still eluding him to this date. After finishing second at Suzuka in August, Hirate and Chiyo are sixth (effectively fifth) in the Drivers’ Championship, leading the charge for a Nissan fleet that has been a one-car show in recent years.

Considering Success Ballast, who is the favourite to come away with the victory around Sugo? 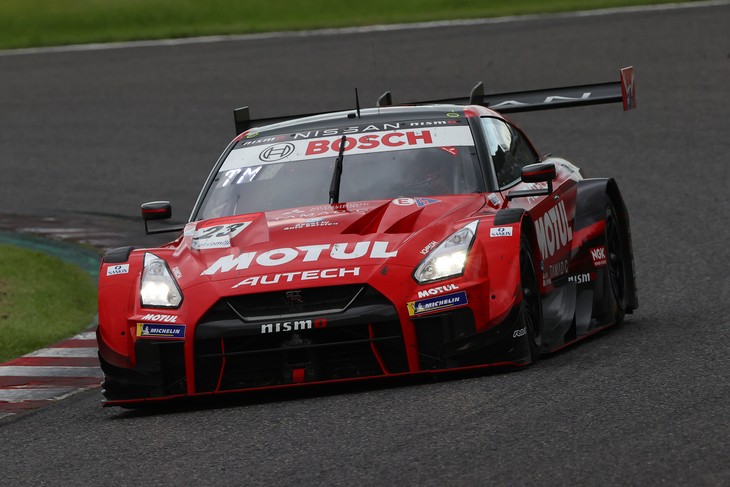 It may be a prime weekend for the Suzuka winners, the #23 Motul Autech GT-R (Tsugio Matsuda/Ronnie Quintarelli), to take a second consecutive win and vault right back into the front of the championship chase. But amazingly enough, Matsuda – whose 23 wins lead all GT500 drivers – has never won at Sportsland Sugo, and Quintarelli – who is third all-time with 17 wins – has only one win here in 2011. The other Nissan primed to compete for the win is the #12 Calsonic Impul GT-R (Kazuki Hiramine/Nobuharu Matsushita), determined to end a five-year winless drought for Team Impul in GT500.

From the Toyota camp – the most successful GT500 marque at this circuit – the #39 Denso Kobelco SARD GR Supra (Heikki Kovalainen/Yuichi Nakayama) comes to mind as a potential candidate for victory, as does the #38 ZENT GR Supra (Yuji Tachikawa/Hiroaki Ishiura) – Tachikawa, like his former co-driver Hirate, has won here three times before.

And the front-engined Honda NSX-GT, making its Sugo debut, has a few strong candidates for victory – none more so than the #8 ARTA NSX-GT of Nojiri and Fukuzumi. Though Nojiri has all but clinched his first Super Formula title with two races left, he’s not yet stood on a podium in Super GT thus far. It’s been another sluggish start to the season for ARTA, but watch out if they string together another strong run of races like they did in the second half of 2020! 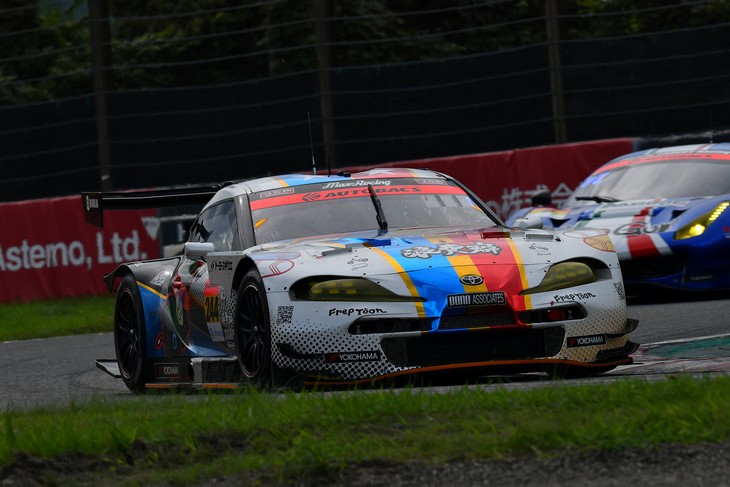 In GT300, there will be one fewer car in the garage this weekend with the absence of perennial backmarker R’Qs Motor Sports. At the front of the championship picture, the #244 Takanoko-no-yu Toyota GR Supra of Atsushi Miyake and Yuui Tsutsumi took a seven point lead in the Drivers’ Championship after their maiden victory at Suzuka.

But with GT300’s more aggressive Success Ballast payouts, Max Racing’s entry is now saddled with the maximum 100kg of Success Weight for the next two races. Finishing in the points at Sugo would be as big as a victory to minimize the loss of points against the likes of the #56 Realize Nissan Automobile Technical College GT-R (Kiyoto Fujinami/João Paulo de Oliveira), the #65 LEON Pyramid Mercedes-AMG GT3 (Naoya Gamou/Togo Suganami), and the #11 Gainer TanaX GT-R (Katsuyuki Hiranaka/Hironobu Yasuda). 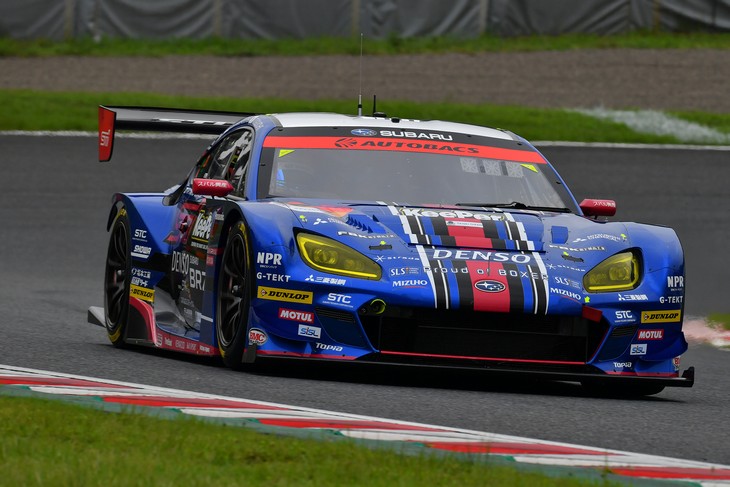 Sugo is a track which has traditionally favoured the lighter, more agile GT300 original construction cars. And of this group, the #61 Subaru BRZ R&D Sport (Takuto Iguchi/Hideki Yamauchi) is the prime candidate for victory. The last-gen BRZ won here in 2018, and scored back-to-back pole positions in 2018 and 2019. Already, the newest BRZ has two pole positions this season, but just two points-paying results in four races. Iguchi and Yamauchi would love a win in order to get back into title contention. Even while carrying 54kg of Success Weight, the blue boxer stands as good a chance as any to pick up its first win of 2021.

GreenBrave fans will eagerly welcome the return of Kohta Kawaai alongside Hiroki Yoshida this weekend, hoping to drive their #52 GR Supra back to the podium. The hybrid-powered #31 Toyota GR Sport Prius PHV apr GT (Koki Saga/Yuhki Nakayama) is overdue for a top ten finish after no points in the first half of 2021. And after leading laps at Suzuka, the Mother Chassis #5 Mach Syaken GTNET Toyota MC86 (Yuya Hiraki/Reiji Hiraki) may once again be in contention for a strong finish. 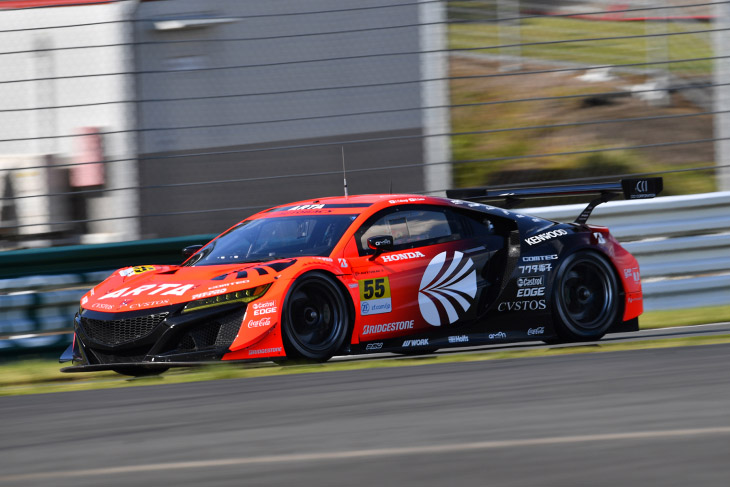 That is not to say that the more powerful GT3 cars, and in particular the mid-engined vehicles, don’t have a chance at the win this weekend. One car that immediately jumps to mind is the #55 ARTA Honda NSX GT3 of Shinichi Takagi and Ren Sato. This same car won at Sugo in 2019, carrying +42kg of ballast. They return to Sugo nearly two years later, carrying +45kg of ballast. Takagi leads all active drivers at this circuit with three wins, and Sato would love to follow up a dominant Super Formula Lights weekend with his first sports car victory.

To that end of course, the likely SF Lights champion elect Teppei Natori also has a chance to take his first GT300 win, in the #18 UPGarage NSX GT3 that he shares with veteran Kosuke Matsuura – especially after a heavy crash in the warm-up at Suzuka led them to miss the last race. With just +9kg ballast on board, the Success Weight is at least in their favour.