Though long-since reported as fact, BMW M Motorsport has now confirmed that the contact was signed today with Dallara for the Italian race-car giant to produce the chassis for their LMDH cars set to race in IMSA’s WeatherTech Sportscar Championship from 2023.

“In Dallara, we are delighted to have found a partner for our LMDh project that shares our passion, professionalism and huge ambition in motorsport and, like us, is fully committed to the goal of writing a new success story in the history of BMW M Motorsport from 2023,” said Markus Flasch, CEO of BMW M GmbH, during his trip to Italy. He took the opportunity, along with Mike Krack, Head of BMW M Motorsport, and Maurizio Leschiutta, head of the LMDh project, to check out the outstanding development and test capabilities that Dallara has to offer. Pictured above are Massimiliano Angelelli, Mike Krack, Andrea Pontremoli, Giampaolo Dallara, Markus Flasch, Maurizio Leschiutta, and Francesco Ravanetti.

“After speaking to all the possible chassis partners, the decisive factor in our decision was that Dallara, with all its expertise and experience, was enthusiastic about working together with BMW M Motorsport. The chemistry was there between us from the word go. We see our relationship as a real partnership in which we are fighting for a common goal of success at the racetrack.”

Flasch, Krack and Leschiutta met at Dallara’s HQ in Varano de Melegari for discussions with the lead Dallara engineers and visited the key areas of the company, including the composite department, its own wind tunnel and the test track in Varano. 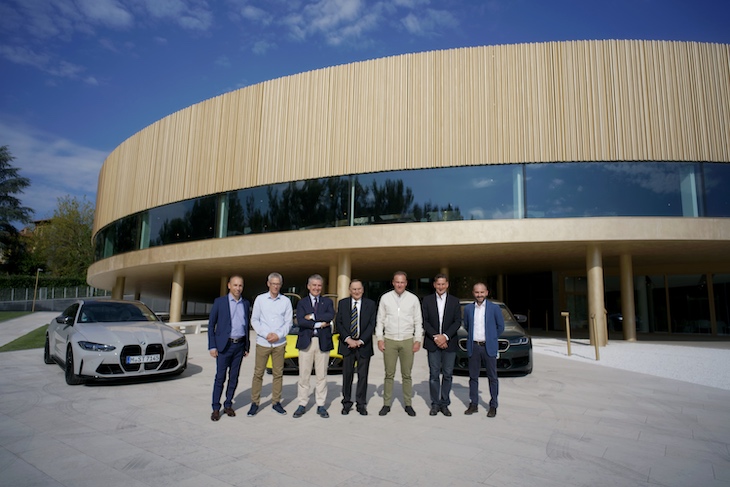 The first test car will be built in Italy in close collaboration between BMW M Motorsport engineers and a team of Dallara engineers assembled specifically for the BMW LMDh project. The rollout will take place next year at the Varano circuit.

“Dallara is perhaps the most successful race car manufacturer in the world and has already played a key role in virtually every relevant circuit racing series,” said Leschiutta. “As well as the desire to work with us, several other criteria were of great importance when making our decision. Dallara is a company that covers the full range of requirements. Its expertise extends to the fields of chassis manufacturing, engineering, development, wind tunnel tests, and simulations. They are very strong when it comes to aerodynamics, which will be a key factor in the IMSA series. In order to ensure that our cars are ideally prepared from the outset and to lay the foundations for success at the racetrack, we are already working closely with Dallara at a very early stage of development.”

“I’m honoured to have been selected by BMW M Motorsport and with great enthusiasm, I’m looking forward to beginning this new adventure”, said Giampaolo Dallara, President of Dallara. “Back in 1977, I had the opportunity to work alongside BMW on designing the M1 as Lamborghini consulting. It was a great experience and a lot was learned. I hope to repeat the same adventure in LMDh. I firmly believe that we will do great things together.”

Andrea Pontremoli, CEO and General Manager of Dallara, added: “Our partnership with BMW M Motorsport is the result of almost 50 years of work in the motorsport industry, engineering and race car development. It is a privilege to have been selected by BMW for their next and new challenge in the hybrid prototype racing world. The LMDh concept and the convergence between IMSA, ACO and FIA has no precedence in history and that will see our total commitment. We are looking forward to competing in this new and exciting chapter of global motorsport at its highest level.”