The #8 ARTA Honda NSX-GT of Tomoki Nojiri and Nirei Fukuzumi will start on pole position for Sunday’s fifth round of the Autobacs Super GT Series at Sportsland Sugo. As Autobacs Racing Team Aguri collected their first pole position of the year in GT500, the #61 Subaru BRZ R&D Sport of Takuto Iguchi and Hideki Yamauchi won its third pole in the GT300 class this season.

During Saturday morning’s practice session, both the #8 ARTA NSX-GT and #61 Subaru BRZ led their respective classes, immediately marking themselves as contenders throughout the weekend. There was also a scary moment towards the end of the practice session, when Satoshi Motoyama crashed his #6 Team LeMans Audi R8 LMS GT3 into the guardrail at turn three, bringing out a red flag (the first of two in the session). Motoyama was uninjured, but heavy damage to the right rear section of the #6 Audi meant that he and Yoshiaki Katayama were unable to take part in qualifying. Team LeMans with Motoyama Racing will attempt to repair the car before the race on Sunday.

Qualifying began at 14:30 local time, under cloudy skies, with no rain and a comfortable temperature of ~25°C.

It was an unbelievably close fight in GT500 Q1: Less than a second covered all fifteen cars that qualified, with just 0.406 seconds covering the top eight qualifiers. The #39 Denso Kobelco SARD Toyota GR Supra, driven by Yuichi Nakayama, led the first phase of qualifying ahead of the two Dunlop-clad Hondas, the #16 Red Bull Motul Mugen NSX-GT of Ukyo Sasahara, and the #64 Modulo NSX-GT of Hiroki Otsu. Nojiri was fourth fastest in the ARTA NSX, just 0.062 seconds behind Nakayama’s best lap of 1’10.275.

Four of the top six teams in the GT500 Championship table failed to advance into Q2, including the #1 Stanley NSX-GT (Naoki Yamamoto/Tadasuke Makino), which has the “Stage 2” fuel flow restrictor (90.2kg/h) this weekend as part of its Success Ballast. Makino did an incredible job to get within 0.508 seconds of the lead, but he could only manage tenth quickest in the session. The #37 KeePer TOM’s GR Supra (Ryo Hirakawa/Sena Sakaguchi), came even closer on the “Stage 1” fuel flow restrictor (92.6kg/h), as Hirakawa missed the cut line in the session by just 0.063s in ninth place. Also missing out were the #14 Eneos X Prime GR Supra (Kazuya Oshima/Kenta Yamashita) in 11th, the most recent winners’ #23 Motul Autech Nissan GT-R (Tsugio Matsuda/Ronnie Quintarelli) in 12th, and the #36 au TOM’s GR Supra (Yuhi Sekiguchi/Sho Tsuboi) in 14th. 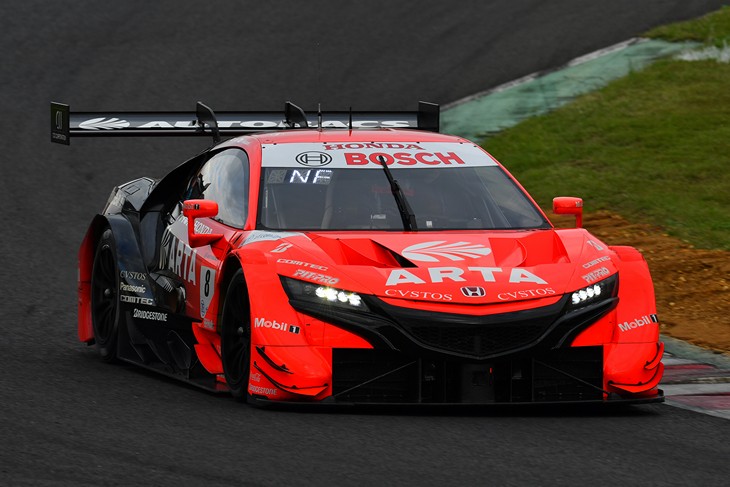 That set the stage for Q2, with four Hondas, two Toyotas, and two Nissans in the hunt for pole position. With two minutes remaining in the ten minute session, every driver was about to post their flying laps.

Nirei Fukuzumi, who took his first GT300 class win at Sugo when the series last visited in 2019, had his black and orange ARTA NSX-GT hooked up throughout a great lap, a 1’09.887 that put him on provisional pole – just two tenths off the course record set in 2019. Fukuzumi was the first driver all day to set a sub-70 second lap time. And as it turned out, he’d be the only driver to break the 1 minute 10 second barrier, holding the top spot until the chequered flag fell. 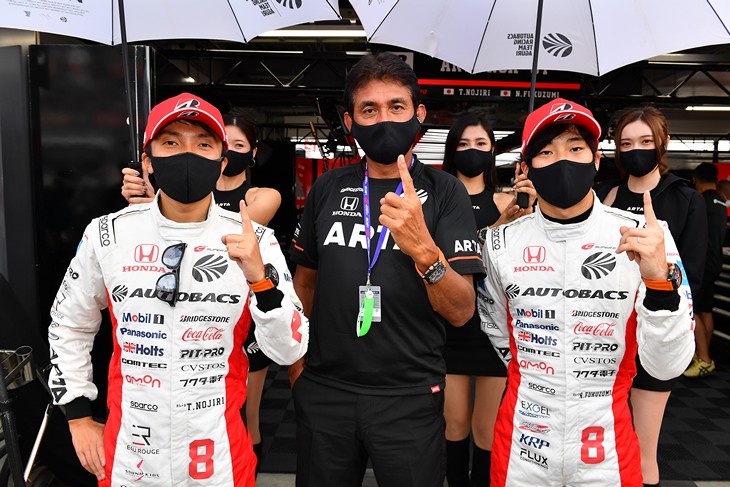 It’s a great start to the weekend for ARTA, who have just one top-five finish in the first half of the season and are hoping to kickstart their second half with a win tomorrow.

“Since there was so little time difference between to top finishers in Q1, I felt that Q2 wasn’t going to be easy for us,” said Fukuzumi after the session. “So, it was no wonder that I was nearly shaking when it came time for Q2,” he smiled.

“But Nojiri-san and the team had set up the car so well for us, and since we had very little in the way of success weight to carry, I felt that I should be able to get a time that was a little faster, but I am glad that I was at least able to give us the number one spot on the starting grid. As for tomorrow’s race, since we haven’t had any race results so far this season that we could be satisfied with, I want to give the fans a race that will make them happy.”

This is Fukuzumi’s third career pole in the last nine races, dating back to the fifth round of the 2020 season at Fuji Speedway. This is also the third consecutive pole position for the Honda NSX-GT in GT500. 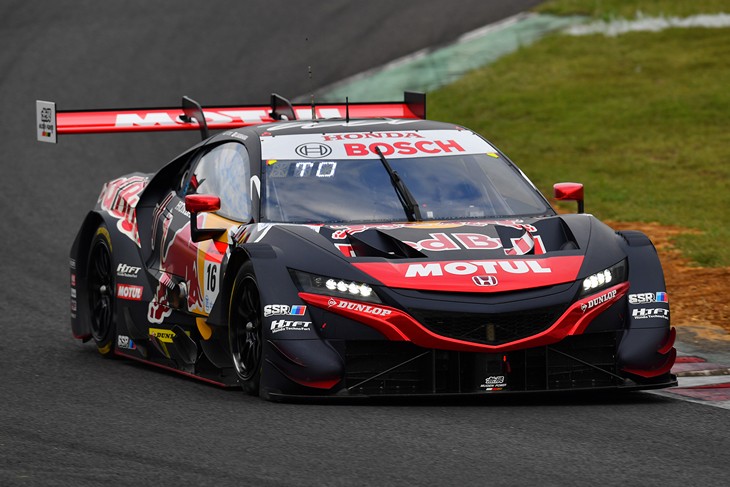 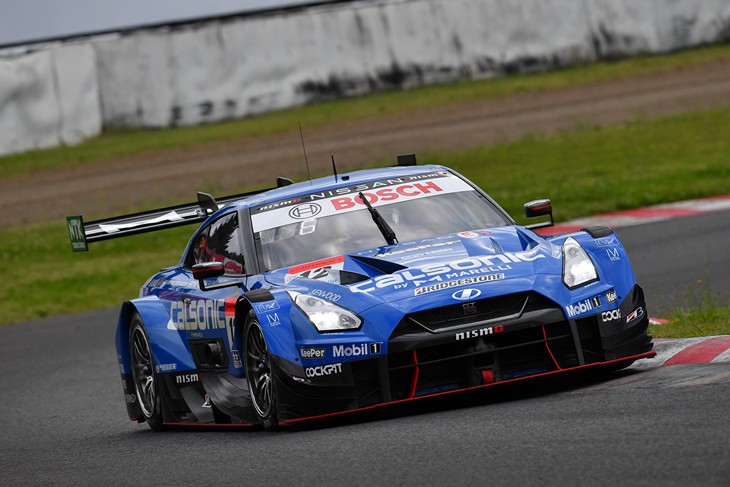 The fastest Nissan was the #12 Calsonic Impul GT-R (Kazuki Hiramine/Nobuharu Matsushita), with Matsushita finishing third in Q2. This is the Calsonic GT-R’s best grid position of the season thus far. They’ll anchor the second row alongside the #17 Astemo NSX-GT (Koudai Tsukakoshi/Bertrand Baguette), qualifying fourth despite being laden with the “Stage 1” fuel flow restrictor and heavy ballast.

Another top title contender, the #3 CraftSports Motul GT-R (Kohei Hirate/Katsumasa Chiyo), overcame their ballast situation to qualify in fifth, next to the #64 Modulo NSX-GT of Takuya Izawa and Oyu, in sixth. 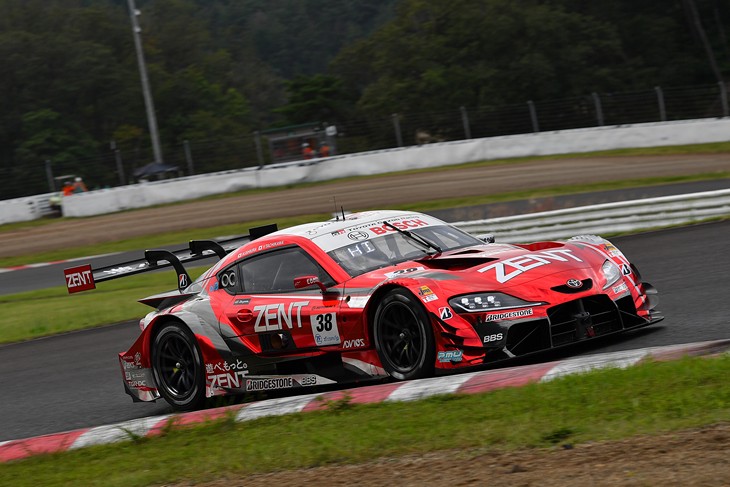 The two Toyotas that advanced into Q2 weren’t as quick as hoped. The #38 ZENT GR Supra (Yuji Tachikawa/Hiroaki Ishiura) managed only seventh place in Q2, ahead of the #39 Denso Supra of Heikki Kovalainen – who followed up Nakayama’s best lap from Q1 with a frustrating eighth place in Q2.

In the GT300 class, the Q1 phase saw just twelve cars in Group A fighting to advance into Q2. The fastest time in Group A belonged to super sub Kazuto Kotaka in the #96 K-Tunes Lexus RC F GT3, filling in for Hibiki Taira who has missed the last three weeks of competition due to COVID-19. In Group B, the #7 Studie PLUS BMW M6 GT3 of Seiji Ara broke into the 1’17 range for the first time all day. This was the second time that the Studie M6 has led Q1 at the hands of the 2004 Le Mans overall winner. 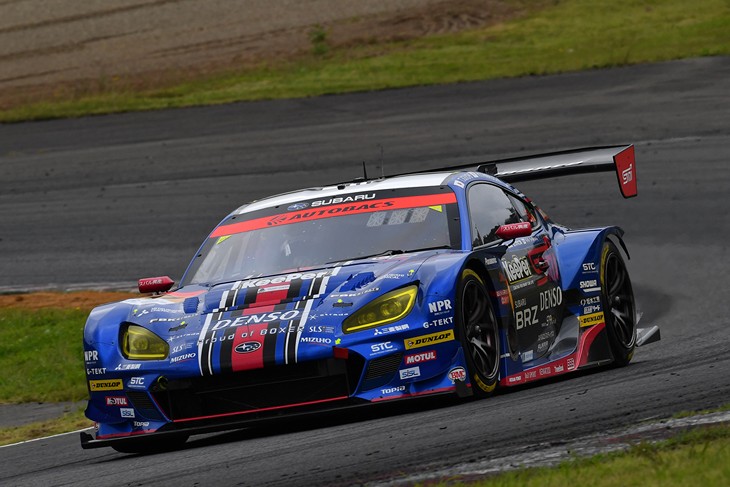 Iguchi in the #61 Subaru BRZ finished second in Group B, with more than enough pace to set up his teammate Yamauchi for a run at the pole in Q2. With just three minutes left in the session, Yamauchi laid down an astonishing time, a 1’17.479. It was more than half a second quicker than the previous best time of the session thus far, and as it turned out, this would be the time that secured the third pole of the year for the new Subaru in GT300, and the third pole in a row for R&D Sport at Sugo (who won the pole in 2018 and 2019 with the previous-generation BRZ).

For Dunlop/Sumitomo Rubber, this continues their unbeaten run of five consecutive GT300 pole positions. And for Yamauchi, it is his seventh career pole position and third of 2021. 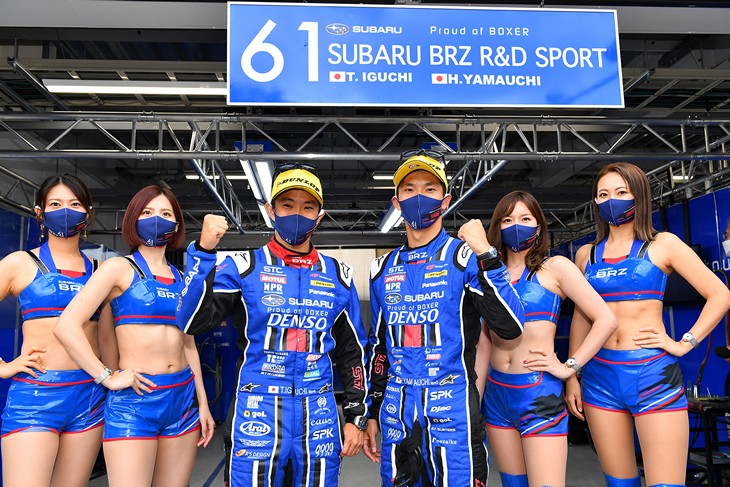 “I am really so happy. Because of the great work of the team, the condition of the car has been very good, and I am grateful for that,” said Yamauchi.

“But since we haven’t been able to turn our last two pole positions into race wins, I want to reset my mind and focus on tomorrow’s race. So, I want to get the win tomorrow so that we can end the day smiling. I hope everyone will be cheering us on!” 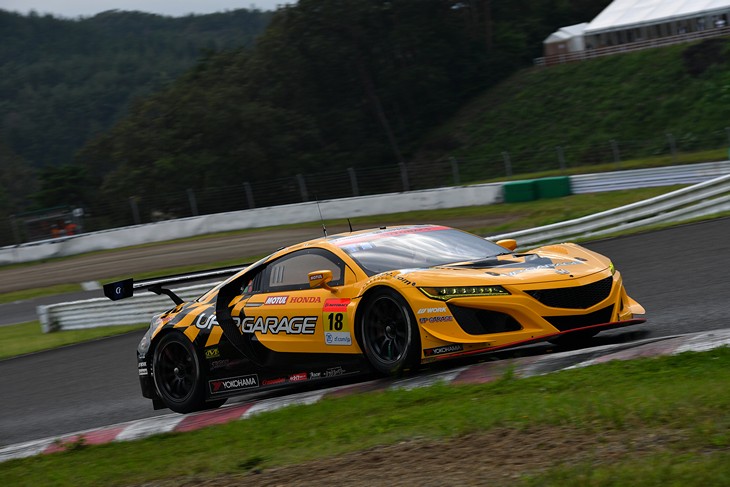 Three weeks after a heavy warm-up crash at Suzuka left them unable to start the most recent race, the #18 UPGarage Honda NSX GT3 of Takashi Kobayashi and Teppei Natori bounced back with a second place qualifying effort. Natori’s Q2 time of 1’17.832 got to within four tenths of Yamauchi, securing Team UPGarage’s best qualifying result of the season. 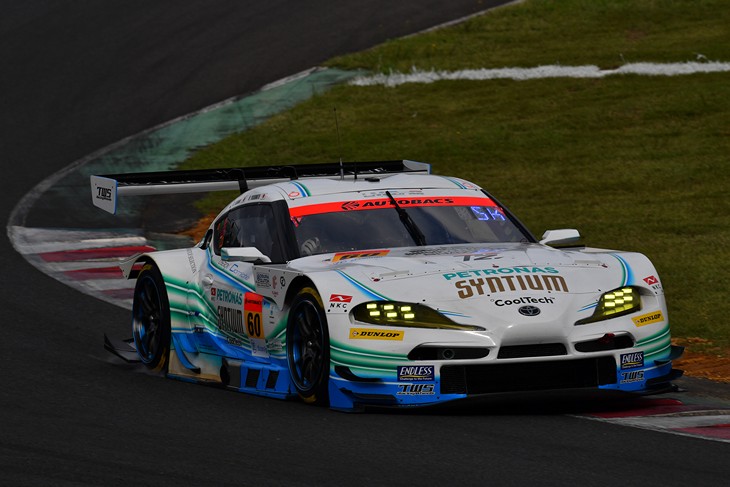 The #55 ARTA NSX GT3 (Shinichi Takagi/Ren Sato) qualified fifth, ahead of the #87 Granseed Lamborghini (Kosuke Matsuura/Natsu Sakaguchi) in sixth – the best result of the year for the second JLOC car. The #4 Goodsmile Hatsune Miku Mercedes-AMG GT3 (Nobuteru Taniguchi/Tatsuya Kataoka) finished in seventh, ahead of the #96 K-Tunes RC F of Morio Nitta and Kotaka in eighth.