Two compelling qualifying sessions and, in some ways, surprise pole winners suggest tomorrow’s British GT races could be some of the best this year.

Free practice hadn’t pointed to the Bentley taking top spot but Kelvin Fletcher was a threat throughout the first 10-minute session and, crucially, top of the pile when Andrew Howard’s accident ended proceedings with 50s remaining.

Michael Igoe led after the first round of flying laps but was pushed back by impressive debutant Kevin Tse and Fletcher at the end of run two. RAM’s Macanese racer was unable to lower his provisional pole time thereafter and could only watch as Fletcher lapped another three tenths quicker on what would be the Paddock Motorsport Bentley’s final effort.

It would prove decisive when Howard dropped a wheel on the grass approaching Shell, speared left into the Armco barrier and came to a halt facing backwards in the gravel trap. The title contender, who went into this weekend 6.5 points behind leaders Leo Machitski and Dennis Lind, climbed unaided from his damaged Aston Martin.

Morgan Tillbrook had just relieved Howard of third place in Enduro Motorsport’s McLaren, while Igoe slipped to fifth in the qualifying order. However, WPI’s Lamborghini, along with Richard Neary, Machitski, Ian Loggie, Nick Jones, Stewart Proctor and Adam Balon, will all move up one place as a result of Beechdean AMR’s 10-place grid penalty for changing multiple significant components, including the chassis, as part of their rebuild.

Incidentally, Barwell’s #1 Lamborghini, which originally qualified seventh, has also incurred a five-place grid penalty after its engine was changed between practice sessions. However, it starts ahead of Beechdean AMR thanks to the lesser penalty.

GT3’s second session will surely go down as a classic after 0.005s separated the top-two and 0.156s a top-five featuring four different manufacturers.

FP2 pace-setter Yelmer Buurman was fastest initially until Dennis Lind made light of his and the #63 Lamborghini’s lack of meaningful track time in either free practice session following extensive repairs. Marcus Clutton and Martin Plowman also leapfrogged RAM’s Mercedes-AMG but were unable to match Scott Malvern who unleashed the day’s fastest time, 1m33.924s, soon after. 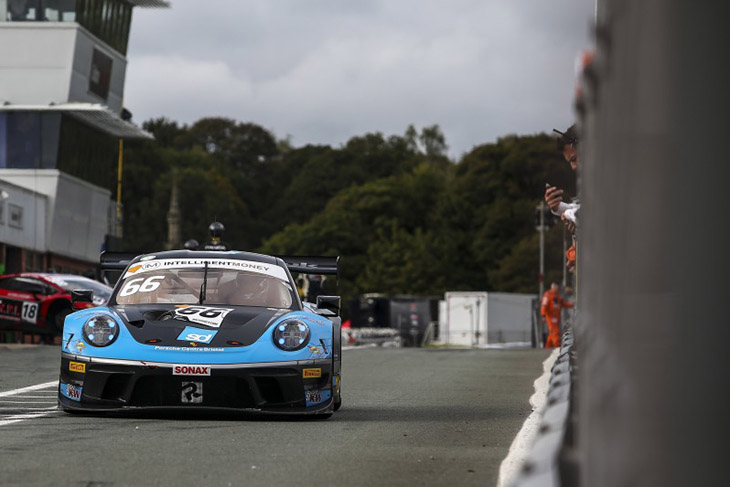 Sandy Mitchell then briefly led a top-three separated by 0.009s but saw his lap deleted for a track limits infringement. The reigning champion rebounded to wind up third behind Barwell team-mate Lind, albeit by just one-thousandth of a second from Buurman who got quicker as the session developed.

Matt Topham and Darren Turner proved unbeatable in GT4 qualifying at Oulton Park, with the duo’s Newbridge Motorsport Aston Martin Vantage proving the class of the field in both sessions to secure double pole positions. 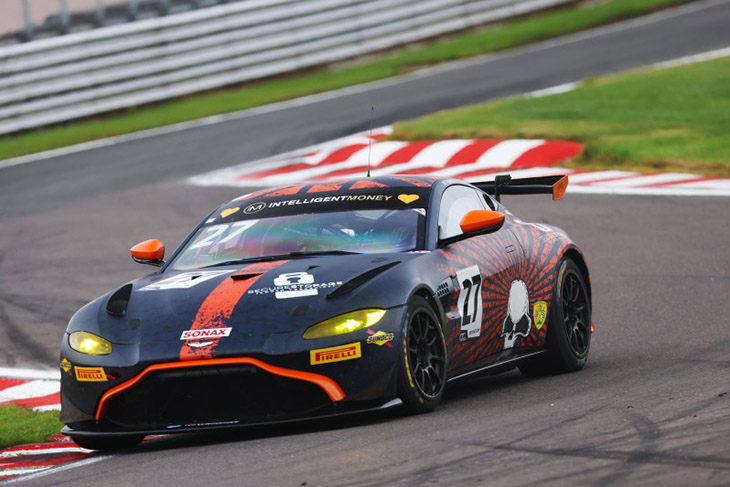 Topham took the wheel for the opening qualifying segment and quickly dipped beneath Will Moore’s early time in Academy Motorsport’s Ford Mustang to establish the Aston at the top of the times by just over a tenth of a second.

With others around him all improving, Topham then made sure of the place by extending the margin to half-a-second with his second flying lap, and from that moment it was essentially contest over.

Will Burns brought Century’s title-leading BMW up to second, doing his and team-mate Gus Burton’s championship ambitions no harm at all with chief rival (and Century team-mate) Chris Salkeld down in seventh. Moore kept the Mustang in third, ahead of Richard Williams’ Steller Motorsport Audi, and the Team Rocket RJN McLarens of Michael Benyahia and Harry Hayek, respectively.

Topham handed the Newbridge car to Turner for the second half, and the Aston Martin factory stalwart made no mistake in soaring straight to provisional pole by a comfortable margin.

That set up a chase between both Assetto Motorsport’s Charlie Robertson and Toyota Gazoo Racing UK’s Jamie Caroline as to who could get closest to Turner’s benchmark. The pair took turns to nibble chunks out of the Aston’s advantage, but neither got closer than 0.2s, with the Toyota just pipping the Ginetta to the other front-row slot.

Sennan Fielding was fourth in the Audi and ahead of Burton’s BMW, which again put distance between itself and rival #9 M4 driven by Andrew Gordon-Colebrooke who could only manage 10th on the grid. Matt Cowley rounded out the top-six aboard Academy’s Mustang.