Vincenzo Sospiri Racing Lamborghini pair Michele Beretta and Frederik Schandorff took their fourth success of the year (and extended their lead in the standings to 12 points) in a slightly weather-shortened Race 1 at the Red Bull Ring, a red flag coming as a violent summer storm broke with several cars off-track at Turn 3. 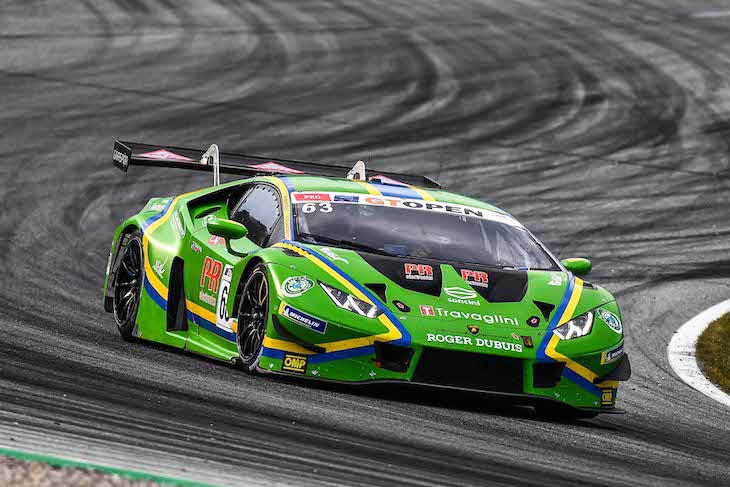 The TF Sport Aston Martin of Sam De Haan-Charlie Eastwood was classified second and the Inception Racing McLaren of Nick Moss-Joe Osborne (which took the pole and won in Pro-Am), while the Olimp Racing Mercedes of Stanislaw Jedlinski-Krystian Korzeniowski won in Am. 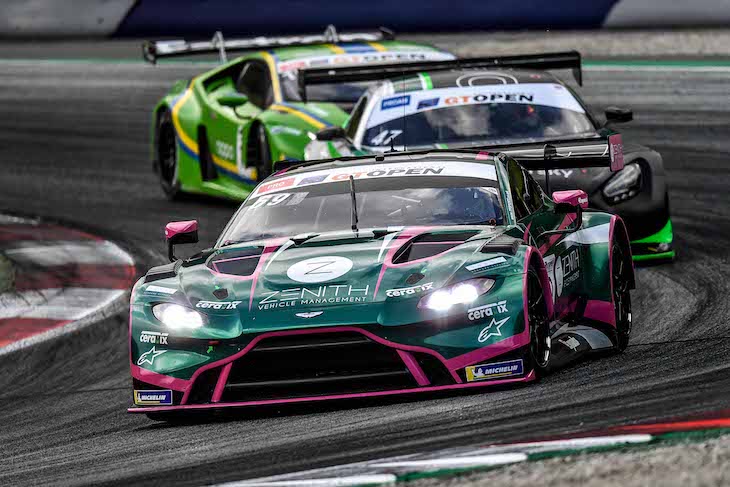 Almost all of the above were involved in the chaos at turn 3, but the results were of course frozen the lap before the red flag.

The episode ruined the strategic play of those who had stopped to put on wet weather tyres, including the Lechner Racing Porsche of Soucek-Al Zubair, the other top championship challenger (eventually 4th) and the other VSR Lambo of Nemoto-Moulin, which finished 8th.

At the start, Joe Osborne (the 7th different poleman in 9 races) kept the advantage, but there was action behind him as Soucek was passed by the two VSR Lambos, retaking third soon after and staying sandwiched between Beretta and Nemoto. The Japanese was passed by De Haan and a couple of laps later by Bastian, although he retook fifth on lap 4.

In the lead, Osborne had a 2.2 second gap after 5 laps, ahead of Beretta, now second in front of Soucek, De Haan, Nemoto, Bastian and Tweraser. The fight was between De Hann and Nemoto for fourth, with Bastian also joining in the fun. On lap 10, Nemoto passed but he would later receive a 3-second penalty for having gone wide off-track and taking an advantage.

Bastian would also pass De Haan on lap 19, exactly when the pit stop window opened, with De Haan, Balfe, Moller, Beretta, Iribe the first to stop. Osborne had stretched his lead to 10 seconds over Soucek with Nemoto and Bastian further back. The Brit would continue to stretch his advantage up to 16 seconds by the time he stopped (lap 26) for the driver change.

After all stops were completed, Nick Moss held a 14 second lead on Moulin and 18 on Schandorff, closely followed by Al Zubair and Eastwood, then Scholze, Millroy, Seyffarth and Carroll.

The rain now started to fall at some points on track and Al Zubair lost two positions with a slight off-track moment, but stayed in contact with Moulin and Eastwood who were in full fight, with the Irishman passing on lap 35, seconds after Schandorff passed Moss for the lead.

The rain came stronger in the last 10 minutes, with Schraml and Moulin opting to pit for wets. Al-Zubair also stopped for wets but lost out as one of the wheel guns jammed. The tyre choice though was right, as proven by the drama that unfolded in turn 3, where suddenly conditions had deteriorated: Schandorff, Eastwood, Scholze, Moss, Carroll, and Basz were all off-track, but with no damage. 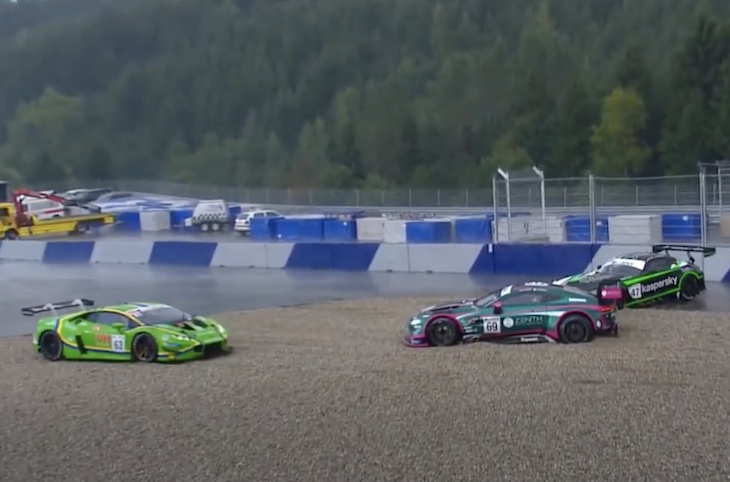 Lap 41 and the race was red-flagged and not resumed, with Beretta- Schandorff declared winners after a few minutes of waiting ahead of DeHaan-Eastwood and Moss-Osborne.