Sydney-based RAM Motorsport (not to be confused with the UK’s RAM Racing) will join the Fanatec GT World Challenge Australia Powered by AWS in 2022 after acquiring a Mercedes-AMG GT3 from New Zealand.

Currently in 2017-spec, the team plans to attack the GT Trophy class initially but has not ruled out upgrading to the latest Evolution specification. 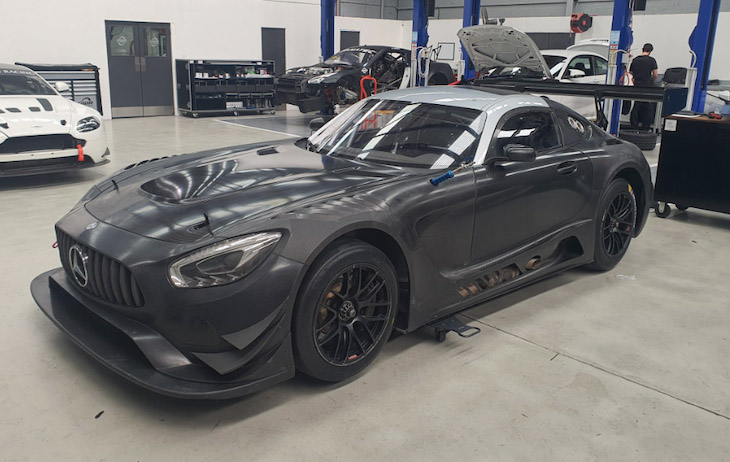 Spearheaded by Michael Sheargold, the programme will be backed by GWR Australia with Garth Walden set to co-drive the entry.

“I’ve been getting competitive in the 991 Cup Car in the state series, I’ve had my eye on GT3 for a while and decided the time was right to have a go,” Sheargold said.

“I’m very excited and I can’t wait to get it on the track rather than walking around it in the workshop.”

GWR Australia has previous experience with Mercedes machinery after running an SLS in GT competition some time ago and have won a race outright in this year’s Fanatec GT World Challenge Australia Powered by AWS courtesy of Brett Hobson in his Nissan GT-R GT3.

“GWR used to run an SLS, it’s not exactly the same, but there is some componentry that’s similar, so it’s handy the team know a bit about the car and have a relationship with HWA,” Sheargold explained.

“The team is currently getting to know the car to make sure it’s as set up as it can before the first test.”

Sheargold hopes to clock up plenty of miles in his new acquisition ahead of next year’s campaign.

“We aim to take it to Challenge Bathurst and we hope to get it to as many Sydney Motorsport Park track days as well as what’s available,” said Sheargold.

“I’ll try to get as much seat time as I can before the end of the year or even early next year. It’d be great to test at some of the tracks on the calendar this season or expected to be on next year’s schedule.”

The 2019 Bathurst 12 Hour-winning Porsche 911 GT3R, campaigned to the win by Earl Bamber motorsport and now owned by Paul Tresidder could be another GT3 class addition to selected rounds of the Fanatec GT World Challenge Powered by AWS.

The Porsche is undergoing final preparations at Wall Racing after being obtained by Tressider 18 months ago.   “Paul is a Pro Am driver, but does a very good job of it,” said David Wall, “He’s wanted a GT3R as long as I’ve known him, so when that car became available and it was the Bathurst winner that our own Matty Campbell sat in it ticked a lot of boxes for him.”

“It left Australia after Earl Bamber Motorsport ran it through Manthey, then it went back to Germany before Shanghai and came back here.

“We’ve put it back to a guise where it’s ready to use again and hopefully we’ll see out by the end of the year.

“Paul would like to do some GT World Challenge Australia rounds. Ones that probably tick the box where he thinks the car might be nice to drive: Bathurst, Phillip Island, The Bend.”