After the premature end to the early-evening session, the final qualifying period of this year’s 24 Hours got under way half an hour earlier than originally scheduled. The pitlane opened and a steady stream of cars headed out onto a damp track at half-nine.

If conditions had been dry, this might have been the perfect opportunity for drivers to set their fastest times, with the benefit of half an hour’s extra daylight and the day’s warmth still inherent in the track. After yet more rain, however, the prospects of any improvements over Wednesday’s session looked slim, but the track was drying, the sun was low on the skyline, and the many photographers were relishing the almost-fluorescent light that bathed La Sarthe. 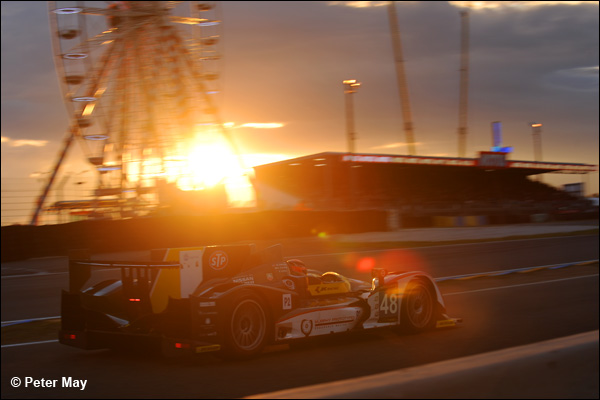 Having seen the fastest times going sub-3:25 on Wednesday, a fair indication that conditions were far less conducive to quick lappery on Thursday was evident in the best times being set by the Audis and Toyotas during the opening fifteen minutes – a quickest of around 3:49 from Alex Wurz (Toyota #7) came after about ten minutes. Interestingly, the Audis at the same period were setting 3:53s, or thereabouts. 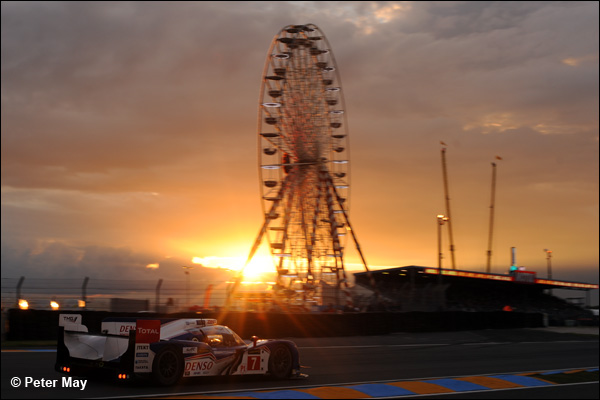 Adding to the challenge was the fact that some sections of the track had almost dried, while others were still decidedly wet. The pit straight had a clearly defined racing line, while standing water still featured at Mulsanne Corner and along the normally high-speed run towards Indianapolis.

Thankfully, the threat of rain receded with the approach of darkness, and with forty minutes of the session completed, Tom Kristensen set a 3:42.819 for the #2 R18 e-tron Quattro to establish a new fastest lap for the day. In LMP2, Mike Conway wasn’t a great deal slower, posting a 3:48.908 to confirm that the provisional pole claimed by the G-Drive #26 on Wednesday had been no flash in the pan. The #26 had also been significantly the quickest in its class in second qualifying as well.

What was becoming evident as the session developed was the continued composure of the Toyota TS030s in the damper conditions. The differential we’d seen between the blue and white cars and the three Audis on Wednesday was significantly less marked for as long as the track remained slippy. Following on from being quickest in the first Thursday session, Kazuki Nakajima posted a 3:41.9 at ten-fifteen to move into quickest slot for the later session too.

Bit by bit, though, the track continued to improve, and with that additional grip, the Audis once more regained the upper hand. Kristensen, Jarvis and Fässler all subsequently posted faster times than Toyota’s best, and a gap began to develop between the two marques once more. 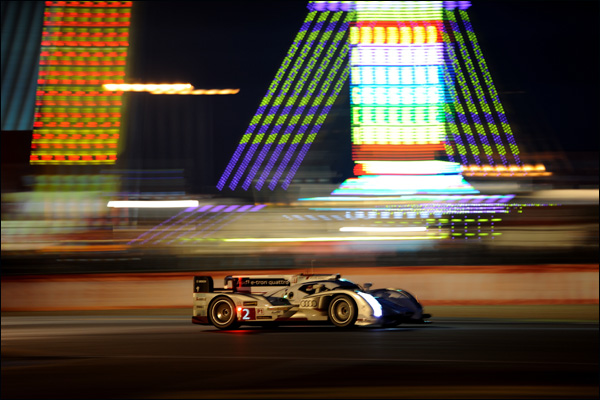 As the session approached the beginning of its final hour there was an incident at the first “Forza” chicane on the Mulsanne for the IMSA Matmut Porsche #76; Christopher Bourret catching the Armco on the approach, ripping the left-hand rear wheel clean off the car, and leaving debris spinning across the track. The red flags flew almost instantly, and a ten minute break ensued. 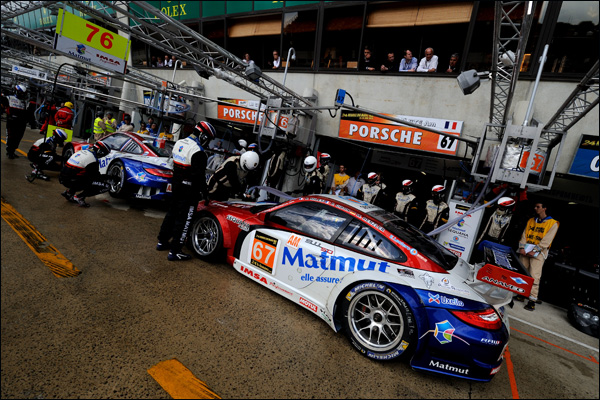 When the pitlane reopened there was an enthusiastic clamour of cars jostling to return to a track that was finally starting to show the promise of improvements. The first to prove the case was Stéphane Sarrazin in the #8 Toyota, who posted a 3:237.232 and so became the first to go quicker than the car had managed on Wednesday. 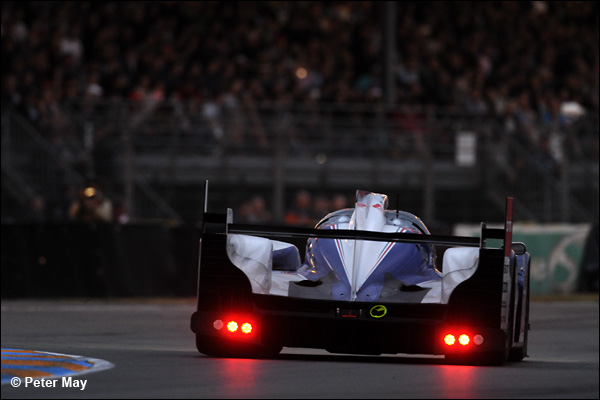 Others were edging closer to their marks as well, but not so Strakka Racing’s #21. Jonny Kane clobbered the barriers at the second chicane along the Mulsanne, and bits of HPD littered the approach. Once again – and wisely – race control threw the switch and red lights and flags appeared all round the track.

Exactly half an hour remained when those lights turned green once more, and just about every car that was able to headed out into the darkness, including the Krohn Racing Ferrari #57. Le Mans rookie Maurizio Mediani was in the now green-and-black F458, and keen to complete his three laps in darkness. 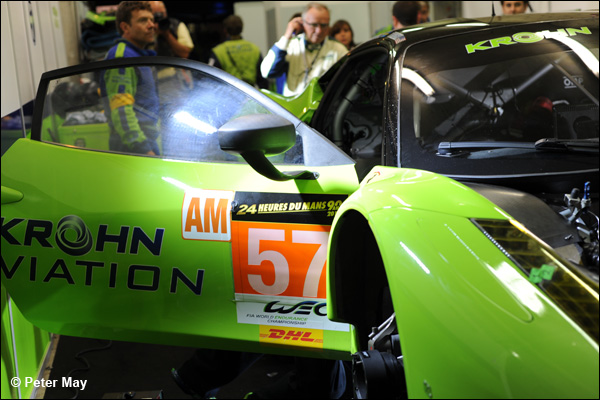 For the first time all day, purple sectors started to appear on the timing screens. André Lotterer claimed the first patch for Audi, completing sector one in 31.8 seconds and crossing the line in 3:23.696, moving second-fastest overall.

A yellow flag from Marino Franchitti in the #33 at Indianapolis, and the #31 off elsewhere, curtailed a couple of fast laps for those gunning for pole, but Makowiecki managed a 3:55.754 in the #99 Vantage. It was a mere tenth shy of matching the car’s existing grip on pole. 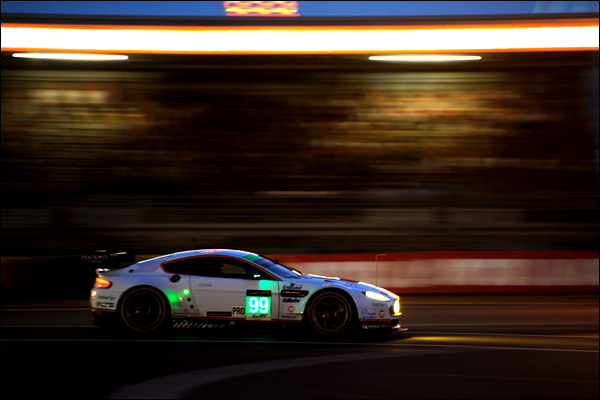 Lucas di Grassi was also flying in the #3 Audi, posting a 31.6 for the first sector, but proved unable to carry that pace to the line, posting a 3:25.037, and then spinning the R18 at Dunlop and earning a reprimand for “dangerous driving”.

There were frantic scenes in the pitlane as teams put fresh tyres on cars and urged their drivers back out into the fray. Neel Jani managed an improvement for the #12 Rebellion Lola, but stayed in 6th overall, the fastest of the privateers. A spin that ended in the gravel for the 8Star Ferrari at Indianapolis brought out yellow flags once again, and with the car quite dangerously beached, those yellows were enforced strenuously while the car was extracted.

A late surge from Stephane Sarrazin with ten minutes to go had the #8 Toyota swapping places with its stable-mate; 3:26.654 still 2.3 seconds shy of Di Grassi in the third of the Audis but two one-hundredths faster than Lapierre. 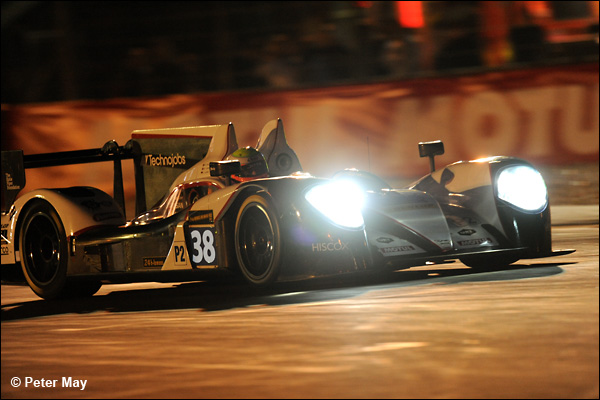 In LMP2, Oliver Turvey was finding significantly better pace for Jota, chucking the #38 through the Ford Chicane and taking the beacon with a much improved 3:40.459 and claiming second in the class. He promptly pitted and handed the car across to Simon Dolan.

A succession of spinners, including an off for the Status GP Lola #30, and a barrier-clipping moment for Eric Lux in the #41 Greaves “Caterham” Zytek, kept the marshals busy right into the final minutes.

Alan Simonsen’s Wednesday time in GTE-Am looked unassailable and the #95 Aston Martin Vantage V8 would secure that provisional pole without really being troubled again on Thursday. 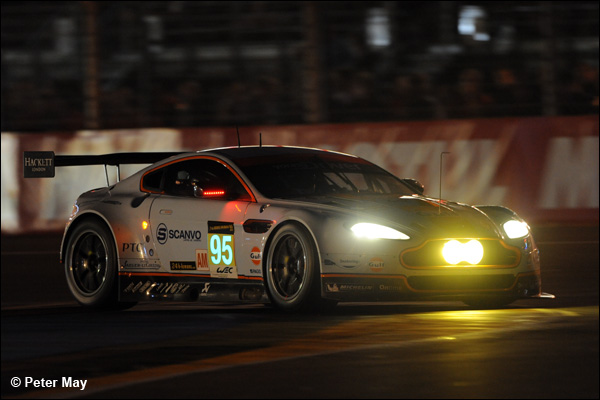 Things were much more fluid in GTE-Pro. Mücke briefly set claim to pole, but Makowiecki responded instantly with a significant improvement in the #99, posting a 3:54.635 to reinstate the order.

Similarly, there were late changes in LMP2, with Olivier Pla reaffirming his class with a 3:38.621 to deny the G-Drive car its lengthy hold on the top position, and with the Oak Morgan #24 finding almost a full second over Martin’s previous best for the #26.

The chequered flag flew at midnight, exactly on time, and confirmed a clean sweep of the top places for Audi, the #2 car of Kristensen, Duval and McNish claiming pole with a Wednesday best of 3:22.349, 1.3 seconds faster than the #1 (Treluyer, Lotterer, Fassler) and the #3 third.

On the very last lap, Marc Lieb set an improvement for the #92 works Porsche to move third in GTE-Pro, half a tenth behind Mücke. Aston Martin, however, in the guise of the V8 Vantage, could feel enormously satisfied with pole in both GT classes.

Thanks to the changeable weather and the successive red flag interruptions, qualifying for the 2013 Le Mans 24 Hours never quite achieved vintage status, but it did have its moments. Mutterings on Wednesday that Toyota had been ‘sandbagging’ must now be assumed to have been unfounded, but it was reassuring to see that the Audis were less dominant in the wet, and the forecast for the weekend remains changeable. 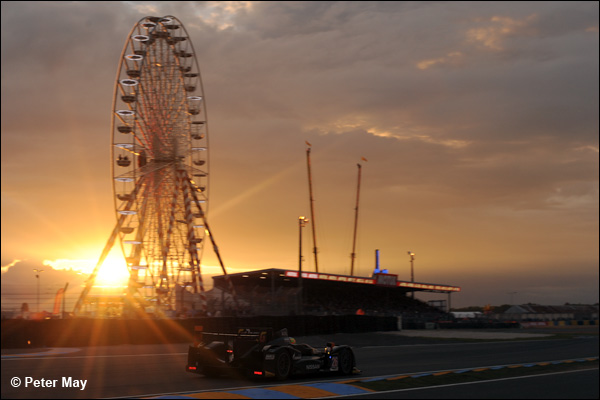 LMP2 did live up to expectations, however, and few would have predicted (with confidence) that Oak would claim pole by a full second – and over G-Drive too. The anticipated charge from Jota did come, but perhaps too late to secure the front-row slot that many had envisaged for the #38 Zytek. Less than five seconds separates the top ten in LMP2, confirming the strength in depth of the class in 2013.

Evidently, the car to have this year in GT is an Aston Martin V8 Vantage. Pole in both classes was reinforced by strong supporting performances from the team’s other cars, but the possible lock-out in the Am category was denied them by an excellent run from the Proton Porsche, #88.