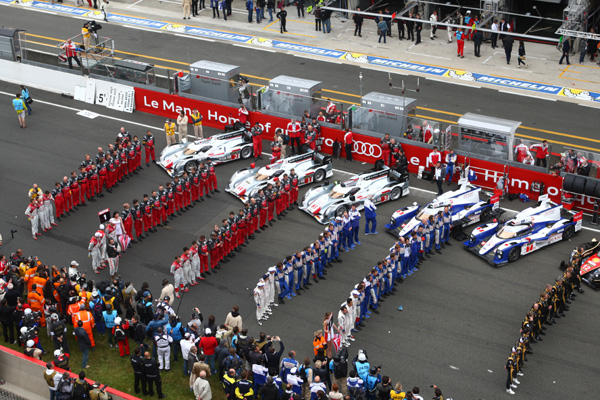 The traditional build-up to the start of the Le Mans 24 Hours held all the usual sparkle – even if the skies remained dull and overcast. One of the highlights of the final hours before the grid cleared was a drive-by from cars representing each of the race’s last nine decades. 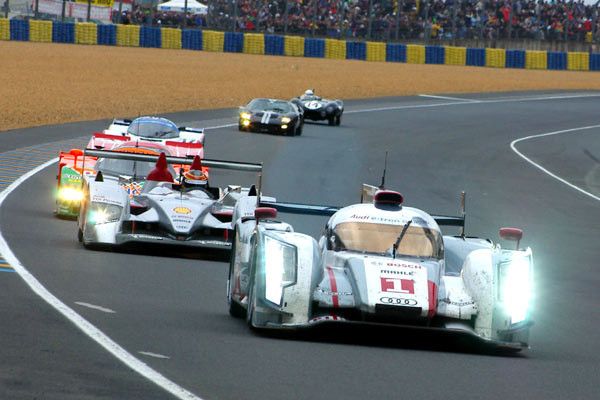 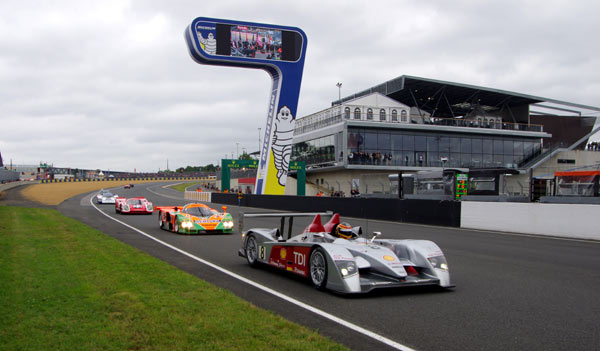 Headed by the Audi R18 that won last year, one of the loudest cheers came as the 1991 race-winning Mazda gave a throttle-blatting performance, a delightful crackle coming with each ear-splitting scream of the rotary engine. Given the honour of parading the 24 Hour trophy was a 1920’s era ‘blower’ Bentley. 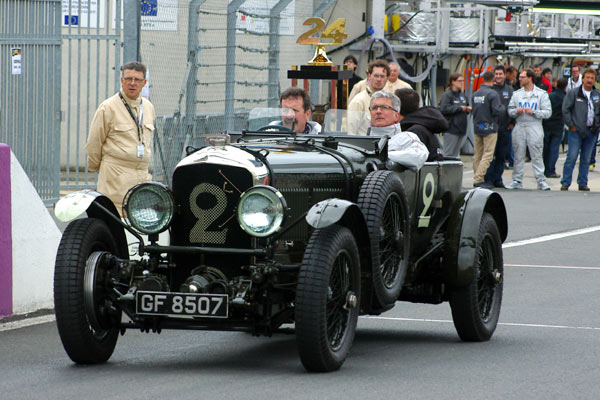 The grid was steadily cleared of VIPs – so many of them! – skimpily clad girls, flag bearers, guests and photographers, and the cars headed off to complete the formation lap, prior to taking up their positions on the grid, with forty minutes to go before the start. Almost without exception, all the cars returned to the pitlane for a final check-up before returning to make the full tour of the circuit, and form up on the grid. Noticeably, the Toyotas made this journey at a very sedate pace, and had their engines switched off for the final few hundred metres – ostensibly to save fuel?

At 14:52 the pace car was flagged off around the track by “a fan”, with the conditions officially declared as ‘wet’. After holding fire for the entire morning, and steadily into the early afternoon, the heavens chose this moment to dump their first load on La Sarthe. Initially it was just a series of brief, though fairly intense showers, each one clearing to give way to renewed hopes of a dry run, only then to resume. 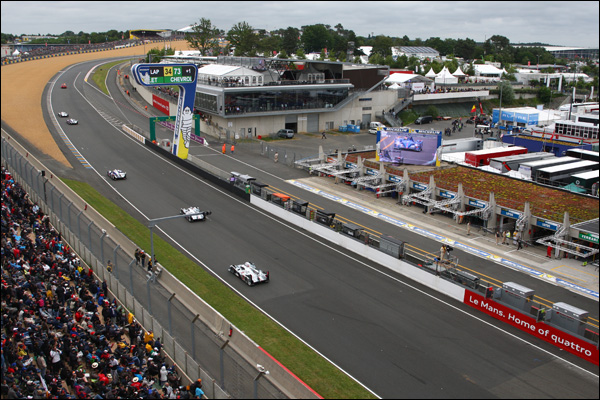 Henri Pescarolo drove the bright red Audi pace car – the first time for some while that the legendary Frenchman has lead at Le Mans, and certainly the first time he’s ever done it at the wheel of an Audi!

The Tricolore to signal the start of the race was waved by Jim France, vice-chairman of NASCAR, founder of Grand-Am, and instrumental in the newly-formed USCR.

Henri maintained a good pace, with the racecars behind him weaving aggressively in their attempts to generate heat in their tyres. 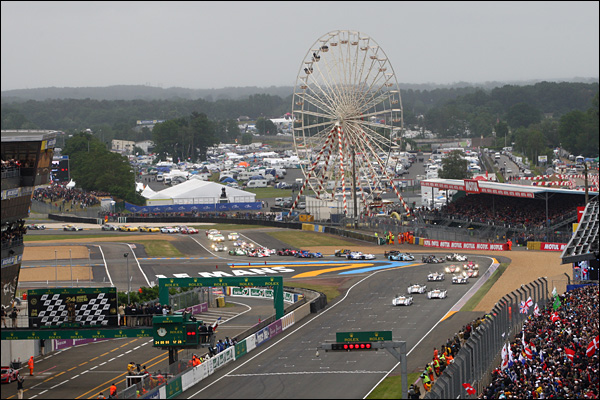 As the procession moved through into the Porsche Curves, the first strains of stirring music throbbed from the public address, followed by the opening timpanic chords from Also sprach Zarathustra by Strauss, better known as the theme to 2001 A Space Odyssey.

Tense faces were seen in the pitlane, necks craned to catch the first glimpse of the cars as they rounded the final element of the Ford Chicane and Audis headed three-abreast along the pit straight and round the long right-hander into Dunlop. 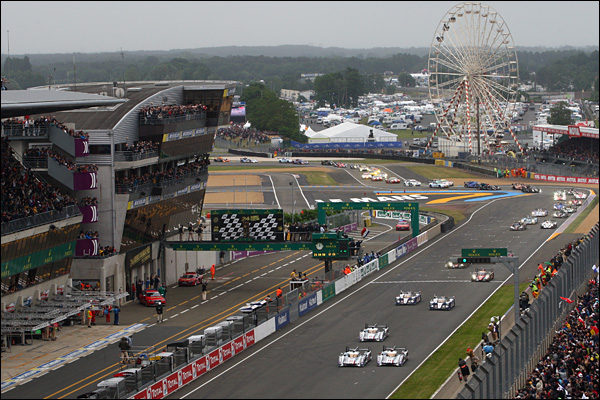 It was a remarkably clean start, with Lotterer through into the lead and Lapierre in the #7 Toyota through in to third as they plummeted down the Esses. The Alpine #36 was seen to cut the corner at Dunlop, but otherwise no critical issues. 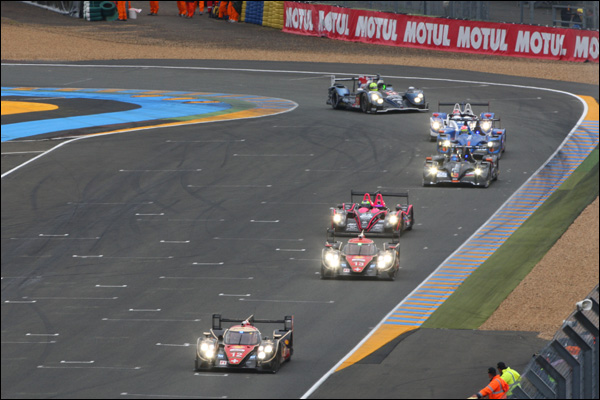 On the run along the Mulsanne, Nicolas Lapierre maintained his impressive charge in the #7 Toyota, tucking in front of McNish’s #2 Audi as they side-stepped through the second chicane, losing the place again on the exit, but then fighting back with a brave move down the outside of the final short element after the old ‘hump’, and re-took second from McNish into Mulsanne Corner.

Seeing the Toyotas on such a pace was a remarkable and unexpected turn of events, as Anthony Davidson took Lucas Di Grassi through the Ford Chicane to begin lap 2 with the #8 in fourth place. Then, in a gutsy move, he took McNish as well to give Toyota third as well as second. Out at the sharp end, Lapierre was closing on André Lotterer for the lead.

In LMP2 that opening lap had seen Olivier Pla maintain his hold on the class lead for Oak from John Martin’s Delta ADR , and the DKR Lola pitted on the first lap, but the rest of the P2 field compressed into a tight nose-to-tail train of jostling machinery – every driver looking for an opening.

The #97 took the lead in GT with Darren Turner steering the art car Vantage ahead of Rob Bell’s conventionally-liveried #99. Marc Lieb was maintaining contact for Porsche, and these three had pulled out a narrow lead over Bergmeister, fourth in the 91 Porsche.

There was a distinct smile across the face of Hugues de Chaunac as he watched his Toyotas not only getting the better of the Audis, but starting to ease away – thanks to the impressive Michelin “treadless wets” fitted to the TS030s, which seem to suit the Toyotas so well.

With less than ten minutes gone the race revealed its cruel face with a massive accident for Allan Simonsen in the GTE-Am leading Aston Martin #95. He’d made a hugely impressive start by moving well clear of Pat Long in the #77 Dempsey Del Piero Porsche, placing no fewer than eight Pro cars between himself and the chasing pack. The rear end of the Aston snapped away, and the car crossed the track sideways out of the exit at Tertre Rouge and hit the barrier on the outside of the turn very heavily, strewing tyres and debris across a wide expanse of tarmac. The Safety Car was immediately deployed while marshals attended to Allan. He was extracted from the car and attended to by the medics, who were swiftly on the scene. The initial news was restricted to the fact that he was believed to be conscious. Having been removed from the car and stretchered into a waiting  ambulance, the emergency vehicles left the circuit after a period of around twenty minutes, with the race six laps old.

Meanwhile, after the frenetic excitement of witnessing Toyota’s unexpected challenge, the safety car period allowed everyone to take stock of situations throughout the race. Having started 36th, Danny Watts had risen to 13th in the #21 Strakka Racing HPD prior to the accident. That became 12th when Nakano pitted the #24 Delta ADR G-Drive Oreca and the car was hauled back into the garage. 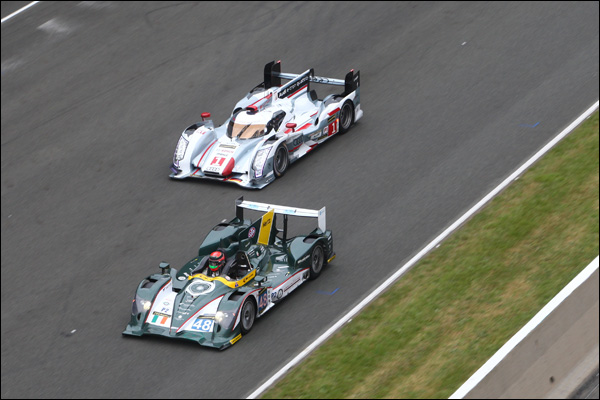 Conversely, in LMP2, Brendon Hartley was also making up ground, easing the Murphy Prototypes #48 through to fifth in class, just behind Watts. That advance became a reverse when Hartley pitted the car – still under the safety car – to address electrical issues, replace the ECU, and lose five minutes in the process – but he remained on the lead lap, such was the slow pace of the safety car. Resuming in 51st place looked worse than it might have been.

One significant outcome of the safety car was the splitting of the GTE- Pro battle; the two halves of the leading pack ending up behind separate safety cars. The delay grew and grew, as the extent of the damage to the barriers at the top end of the Mulsanne became more apparent.

With the race entering its second hour, the announcement came on the screens that the Safety Cars were about to be withdrawn. Of the opening hour of the race, only ten minutes had been pursued at racing speed, but it would be ten minutes that many will never forget.

We apologise for the late posting of these hourly updates, but the Internet connection in the Media Centre at Le Mans was “intermittent” to say the least. Five hours in, we finally secured a connection. This item was prepared before any official announcement was published concerning Allan Simonsen’s accident. Also, as a result of connectivity issues at Le Mans, it proved impossible to post this for almost five hours.