The leader pitted in the first moments of Sunday, with Alex Wurz staying aboard the #7 Toyota and taking on just fuel. The Austrian’s advantage over the #2 Audi of Marcel Fässler was 100 seconds at the end of Lap 139, this being the only other car on the lead lap. 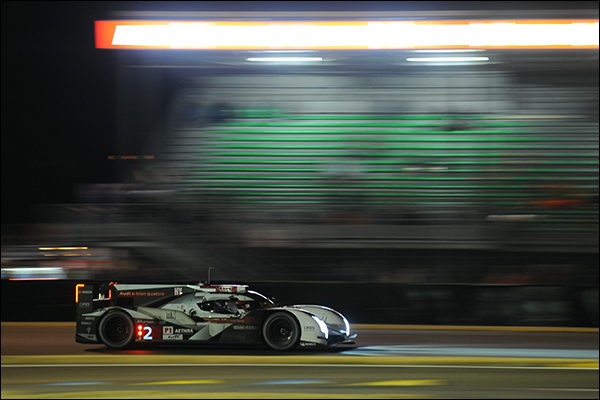 Jann Mardenborough continued to lead the LMP2 class while in the final stages of a quadruple stint – his pace barely dipping – with the #35 G-Drive Ligier Nissan heading the #36 Signatech Alpine of Nelson Panciatici by 35 seconds, although this was increased greatly when the Alpine pitted at 00:10. Mardenborough and Alex Brundle would share the night driving in the #35, with Mark Schulzhitskiy being kept fresh for the morning.

“That was the best run I’ve ever had in any car,” said Mardenborough after pitting. “For me it couldn’t have gone any better. I don’t think I’ve ever been able to say before that it was perfect but this time it really was. I got my fastest lap on tyres that had done two stints so that goes to show how well balanced this car is. I’m learning a lot about tyre management. We’ve got a good lead on the car behind now so let’s hope we can continue like this.”

The #77 Dempsey Porsche served its painful three-minute stop/go for spinning its wheels in the pitlane, with Pat Long returning to the race eighth in class. Also in trouble was the second-in-P2 Thiriet Ligier, which had been reported for speeding in the pitlane.

Mark Webber ended his own quadruple stint at half-past midnight; Timo Bernhard taking the #20 Porsche Hybrid back out in fourth. 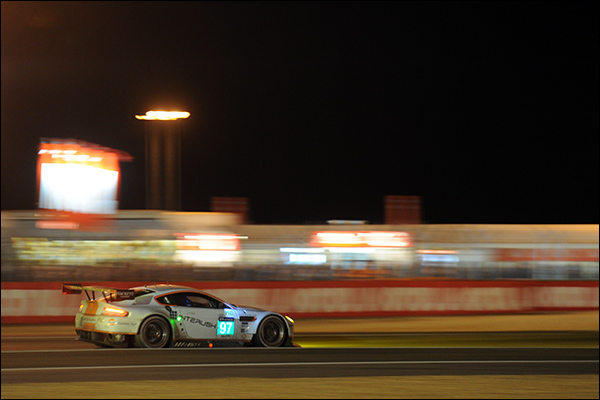 The GTE classes remained the domain of AMR, with Stefan Mücke heading Pro by eight seconds in the# 97 Vantage (from Gimmi Bruni in the #51 Ferrari) and with Pedro Lamy leading Am in the #98 by just under two minutes from the #95 sister car of Kristian Poulsen.

The #91 GT Porsche of Patrick Pilet returned to the track after its lengthy stop, but things clearly weren’t yet right and the 991 was back in the garage soon afterwards.

However, the GTE-Am leader was suddenly in trouble as Lamy pitted with smoke pouring from under the hood. The car went into the garage and the AMR mechanics went to work. Poulsen assumed the lead in the class, with a healthy lead over the #72 SMP Ferrari of Viktor Shaitar.

Gimmi Bruni pitted after 133 laps to hand over to Toni Vilander, promoting Tommy Milner to second.

Oliver Gavin, #74 Corvette: “Mücke’s got the edge at the moment, but it’s an epic scrap between all three marques, each with certain strengths.

“Generally, I think we are in pretty good shape, but right now we have been trying to find a tyre that will suit the changing conditions and we can rely on to get a double stint out of, though the track is coming back a little bit now. We’ve gone through about every compound and combination. We may have to tread water a bit through the night and have a better go at it in the morning.

“I had a great scrap with Darren – I got a good run on him, got right up behind and managed to get through on the inside – he gave me lots of room. Big respect for Darren, we’ve known each other and raced each other for ten years and it’s always fair, there is never any feeling of risk in those situations. I know that car having driven it at Austin – it’s a great car and a great team; which makes it even better when you beat them..!”

The #91 Porsche was brought back in again – this time by Jörg Bergmeister – and its woes continued.