The lead in P2 hung in the balance once again at 11am on Sunday morning as the #46 Thiriet by TDS Racing Ligier suffered a front left suspension problem and had to limp back to the pits and be pushed into the garage for repairs – total time lost was six minutes.

Having been disconsolate only a short while previously, the #35 G-Drive Ligier crew found themselves back in the lead of the class, which until this morning had been marked by exceptional reliability. The Jota Sport Zytek was third in class, having run metronomically since its early problems with a number panel and getting caught out by safety cars.

Drama then struck once again at the front of the field as Tom Kristensen ground to a halt on the Mulsanne Straight in the #1 Audi. The Dane hit the reset button and got going again slowly as the Team Joest mechanics scrambled to prepare the garage. The car seemed to pick up speed, though, and continued past the pits for one lap before eventually deciding to stop on the next tour for fuel.

Shortly afterwards, the second-place #20 Porsche came in for a routine stop in the hands of Timo Bernhard. Kristensen narrowly avoided contact with a P2 car on being released from the Audi pit, and the R18 didn’t seem to be up to speed as it went under the Dunlop bridge. 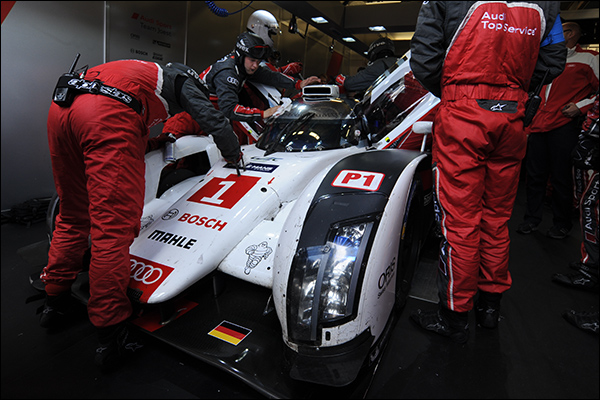 Audi’s mechanics once again readied themselves to receive Kristensen – this time the dollies came out and the car was backed into the garage for a turbo change. The #20 Porsche moved into the lead at 11:20am with Bernhard still driving. Just over 30 seconds behind him André Lotterer clocked the race’s fastest lap so far – a 3:22.567 – before making a stop for fuel and tyres.

Both GT classes were looking reasonably settled at this point – Vilander comfortably in the lead of Pro at the wheel of the #51 AF Corse Ferrari and the all-Danish-driven Aston Martin heading Am in the hands of Nicki Thiim.

With the #2 Audi now in second as the #1 remained in the pits, Lotterer was lapping four seconds a lap quicker than leader Bernhard, with the gap set at just over a minute and a half. The #1 got new tyres as it sat in the garage, while Kristensen handed over to Di Grassi. Total time lost in the pits was nearly 18 minutes.

The rest of the hour passed without major incident, although Lotterer continued to eat into the gap to the #20 Porsche, getting it down to a minute and 11 seconds by midday. There was also a spin at the exit of Maison Blanche for the #67 IMSA Matmut Porsche, and the formerly class-leading #97 Aston Martin ran wide at Mulsanne corner in the hands of Turner.

As the clock ticked over to midday, Bernhard pitted for a routine stop. At this point in the race, the #2 only needed to be a second a lap faster than the Porsche over the remaining three hours in order to challenge for the lead before the end.