Emil Frey racing is an intriguing outfit in the GT arena, having elected not to purchase an ‘off the peg’ GT3 racecar but instead to go it alone, privately developing and racing a Jaguar XK on the international GT stage. 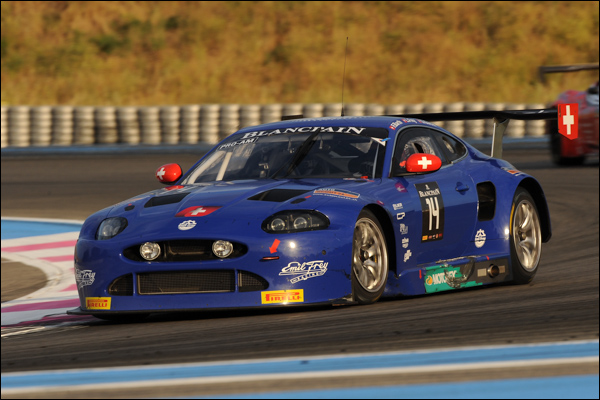 As expected, there is a good story behind the team, its roots and its ambitions. Dailysportscar caught up with Lorenz Frey and Fredy Barth during the Paul Ricard round of the Blancpain Endurance Series.

Lorenz Frey gave the early part of the family history.

“My grandfather used to race motorcycles and that is when he met Sir William Lyons, the founder of Jaguar and that is where the relationship between Emil Frey and Jaguar started. Jaguar wanted to go into Europe with their Swallow sidecars and they chose to do it with Emil Frey. So we were the first and oldest importer of what would become Jaguar and we still do it now. Because of this I feel very loyal to the Jaguar brand.”

But it wasn’t just links to the British manufacturer that continued to run in the Frey family, car racing did too.

“My father raced too, cars though, and this was with Toyota and Mini Cooper, he had his own team in the 1960s and 1970s but then he stopped it.”

The racing gene could well have been eradicated because Lorenz’s first sporting passion was ice hockey, but a number of accidents stopped him from pursuing that further when he was just 18. “I then got interested in motorsport and started in Switzerland in some small races in things like Mitsubishi, Subaru, Lotus, but then into Aston Martin GT4 and then GT3. When I started racing properly a lot of people and employees started talking about getting the team back up and running again.”

GT racing was a logical course to follow not only because of the experience Lorenz had gained but because as a team funded by a car importing business, supporting the brand made a lot of sense. “Our efforts also coincided with Jaguar becoming resurgent as a sports car brand and Emil Frey were keen to show its customers that it didn’t just sell soft limousines anymore.”

Of course this presented a rather large problem. Jaguar didn’t have a GT racing car available.

Fredy Barth picked up the story. “Apex had a car available, but it was old. We also looked at Gentilozzi’s GTE car. We decided they were both too much of an unknown so we decided to start from the beginning and build up this incredible project.”

The team built up its first prototype in 2012 but the initial performance was not as expected and Barth realised they needed to make a big step forward. “Unfortunately we did not have the time or resources to do that so we went away and analysed very carefully what we had, what we needed to do and who we needed to partner with. For example Ilmor, with its Swiss/English connections was a great thing for us. We built a network of partners, improved our workshop and built up our entire crew based in Safenwil in Switzerland. We try to coordinate all our development in Safenwil..” 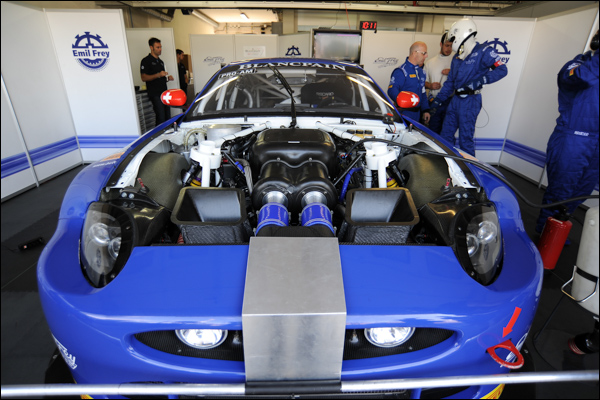 “As a result of this analysis and approach in 2013 we rebuilt almost the whole car except the suspension and the engine. This year we did them too!” 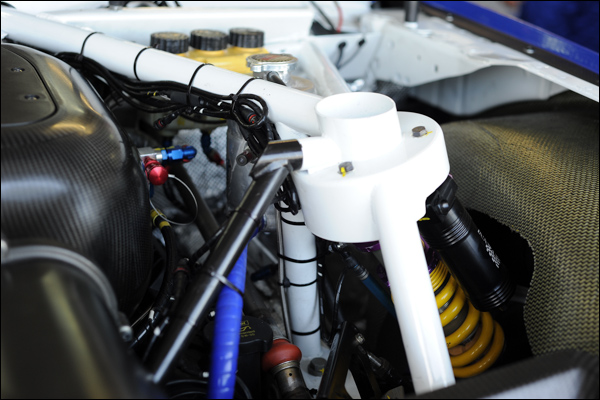 “We built a transaxle gearbox to get better weight distribution and the engine has been lowered 15 cm and sits 20cm further back than the road car. We have a new subframe in the front and a new one in the rear for the suspension and gearbox. The whole bodywork is carbon fibre and has been improved through CFD [and also features some very neat touches such as the ’Porsche Turbo’ style rear wing ducts for cooling the transaxle and the port for the air jacks being through the reversing light on the rear cluster]. The rollcage is glued and screwed to the aluminium chassis, which regulations dictate has to come from the standard road car, as does the original leather dashboard top. The electronics are more or less self-made. We have a paddle-shift gearbox so we have even made our own steering wheel and all the electronics for that. Our ECU’s, switchboxes and cabling is all designed as ‘plug n’ play’ so we can easily move forward and change things.

Building a car and ensuring it can be raced within the rules is of course a major logistical challenge. The team decided to comply with the Belgian national G3 homologation class, “which is in effect the same as GT3. Working with SRO and FIA technical delegates throughout has assisted. The G3 homologation for cars under FIA homologation process allows many changes and revisions throughout the year, whereas FIA GT3 only allows one each year. For us with a new car, and the little experience, that is vital. The SRO are happy to have a new brand in their series but I think they are very careful that they don’t allow us to be too fast too soon. It is David v Goliath and this means we have to develop and race at the same time. The worst thing for us would be for us to perform poorly and for people to begin asking why we were still turning up to race meetings, so we have to make this work and we will. To us, even if people might just enjoy looking at the car and the fact that we are being different, we don’t really care about that, it is only results that matter to us.”

The team has a further intangible value however. It is also the apple in the eye of the wider Emil Frey organisation and gives opportunities for apprenticeships and experiences for others employed in the group, so has a morale-boosting factor for the entire company too and there is great pride in the race team and what it is achieving.

The team currently race their Jaguar XK in the Pro-Am Cup division of the Blancpain Endurance Series with Frey and Barth joined by the experienced former FIA GT and LMES Champion and two-time Le Mans class winner Gabriele Gardel to complete the all-Swiss line-up. The season has been very much one of building, it could never be anything but, and things are certainly going in the right direction. 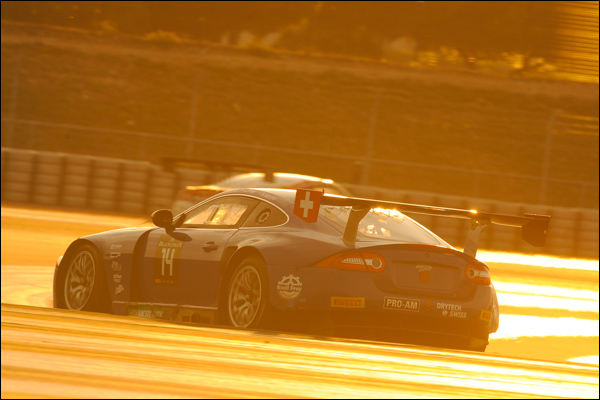 “We had more than a thousand kilometres of testing in three test days without issues before the Silverstone [BES] round. We had a really good hope at Silverstone, we wanted to show the Jaguar in a good light in England and yet we got so many problems at the race.”

The decision was taken to spend the time between the Silverstone and Paul Ricard rounds of the Blancpain Endurance Series in taking the car apart and rebuilding it rather than testing yet further. The team approached some new suppliers from across the globe to address as many issues as possible, but the logistics of doing so is another headache to a team that wants to do things differently. 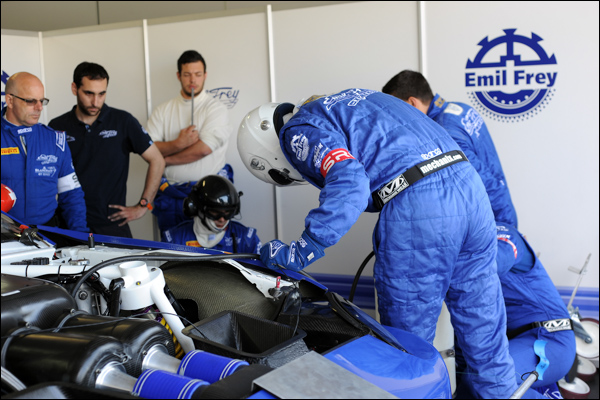 A fine line has to be drawn between the cautious approach of ordering single one-off components at a large unit cost, without any way of knowing the durability or performance until it is tested; or ordering multiple components at a lower unit cost and therefore having some spares, yet increasing overall costs with no guarantee of the performance or durability expected. Even beyond that, getting suppliers interested in a one-off project where there is little prospect of repeat business, together with lengthy delivery times, including delays often caused by Swiss customs, and yet further prolongation is added to development of the car. 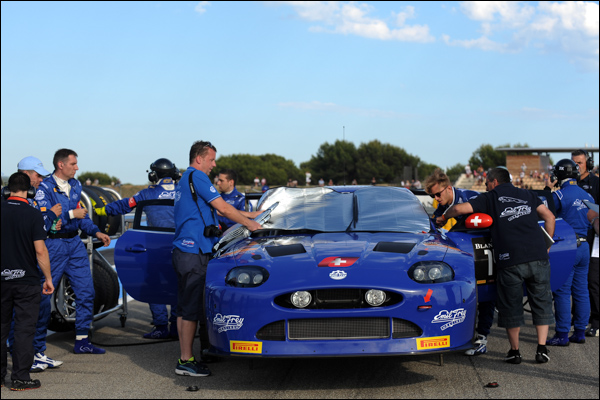 Despite this, the team has rallied to the logistical difficulties and between Silverstone and Paul Ricard the car had improved in many respects. The whole team knew the car inside out and they needed to, because without any real testing, the first practice sessions were inevitably problematic and were spent chasing issues and getting the car prepared for the track rather than chipping away at laptimes through set-up changes as would normally be the case.

Barth: “Performance-wise we are at a good level, but in effect this is a new car, we need to get rid of the teething troubles and that is where we are here at Paul Ricard. At the first free practice in Monza our Jaguar was second fastest even though we had only put the car together two days before and done two hours of testing! It was amazing! And we already run with restrictors and additional weight. 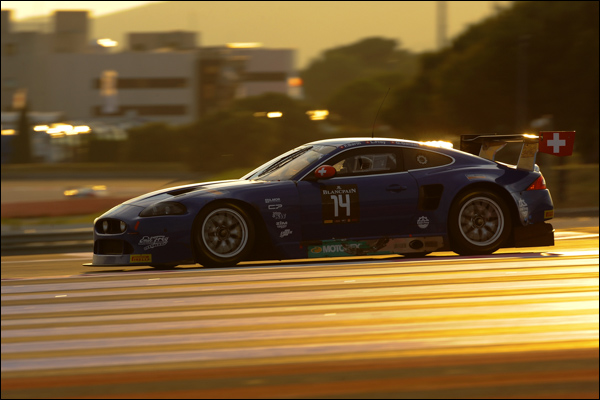 “But of course we are aware of the huge competition of the GT3 works manufacturers and we have to relate our expectation to an achievable goal.”

Barth believed that top 20 would be evidence of a competitive car, but the ebullient Frey would of course prefer his barometer of success competitiveness to be winning!

The car was certainly on the pace at Paul Ricard in qualifying and also during the race, frequently lapping in the 2:00 territory that the top competitive cars were. 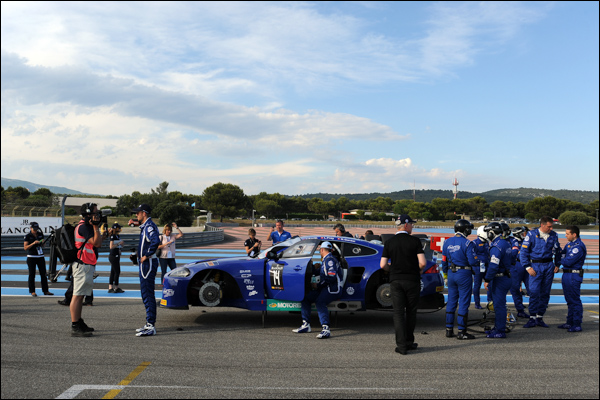 Since our interview, the Spa 24 Hours was also a good showing for Emil Frey’s Jaguar, running on the pace until a gearbox failure after 14 hours forced a retirement. Both Frey and Barth are confident that 2000 race kilometres and all the knowledge that has brought will allow them to be more competitive still come the Nurburging round this weekend. 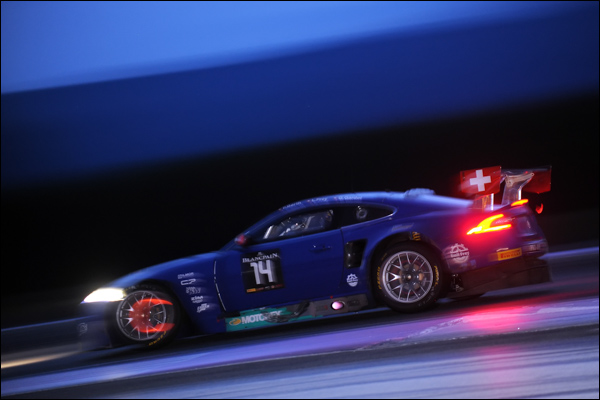