Timo Bernhard and Mark Webber managed to secure the first pole position for the #20 Porsche 919 of the year ahead of the sister – #14 Porsche for the 919’s first qualifying 1,2.

Meanwhile G-Drive Racing’s Ligier of Olivier Pla and Romain Rusinov went quickest in LMP2, putting the team one step closer to the title.

“The #14 has been on pole three times, I think though, that it was time for the #20 to get it done here. It was a great performance from me and Mark [Webber],” said a jubilant Bernhard after the session. 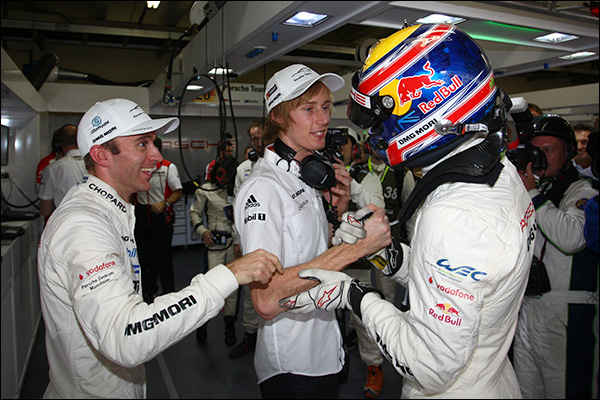 It looked like the #14 would take the top spot by the time the teams started to begin handing over to the second drivers. Neel Jani set two rapid times once again, and put the car firmly at the top, but Marc Lieb couldn’t quite match the pace of his teammate. Mark Webber out-duelled the German to give the #14 pole with a 1:17.676 average, just one tenth quicker than the #20.

The #8 Toyota came in third and four tenths off the pole time – as the newly crowned champions look to snatch a podium tomorrow. In fourth it was the #2 Audi, the duo of Marcel Fässler and Bénoit Tréluyer were over a second off the pace, but it was a much more promising session for the Audi crew who have struggled for pace mightily in the last couple of races.

Tom Kristensen and Lucas Di Grassi were the slowest of the LMP1 H runners in the Dane’s last qualifying session, their average was a 1:18.983, 2.1 seconds ahead of the LMP1 L pole-sitting #12 Rebellion R-One.

In LMP2 Olivier Pla’s laps secured G-Drive Racing’s pole spot, it was another great qualifying performance for the team who set a 1:24.463 with KCMG sitting second in the class, four tenths back. The #37 SMP Oreca, ended up third.

It was an almost completely clean session overall, a brief spin by the Lotus CLM being the sole incident in the 25 minutes of running.