Stephen Kilbey joined DSC just two years ago and in that short time has blossomed from a wide-eyed, hugely enthusiastic but raw young forum poster to a young man we are happy to send solo to cover an international motor race. 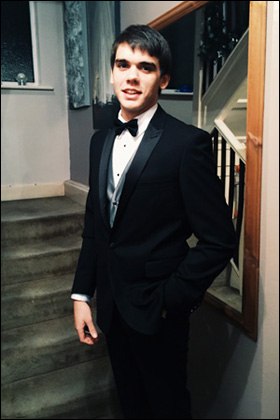 We’re delighted then that his efforts, under the tutelage of the DSC editorial team, with a particular mention to Stephen Errity, plus the efforts of his college tutors, have attracted admiration on a wider scale.

This evening Stephen was awarded the prestigious Sir William Lyons Award by the Guild of Motoring Writers for the best young motoring writer of 2014.

It’s a big award, but it took a big effort to win it.

We’re very proud of you Stephen

Stephen has earned his two DSC nicknames – ‘Mills & Boon’ through a use of overly florid text which we beat out of him with sticks and ‘Eating Machine’ for his heroic efforts to ensure that The Smoking Dog had no leftovers whatsoever after any racing weekend where Carlo and the team were unlucky enough to share a paddock with the 2014 DSC Blancpain GT reporting team!

He’ll be back with DSC in 2015, but we’ll be insisting he attends every race with the suit he wore tonight!