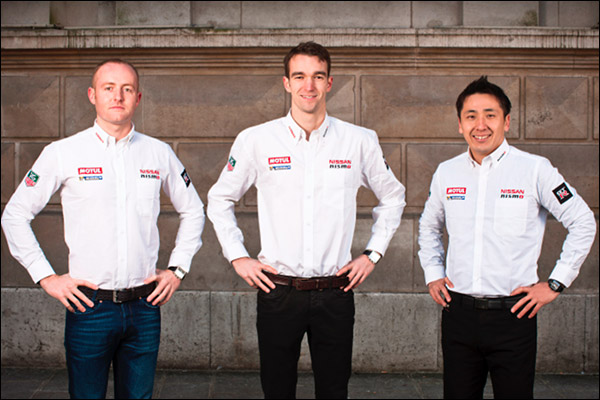 Pla and Ticknell are full season FIA WEC drivers (as is Gene) with Matsuda named in the Le Mans only #21 car. The three Nissans are confirmed as numbered #21, #22 & #23.

Olivier Pla finally nails a factory place after missing out on a deserved chance with Peugeot when the factory team pulled out suddenly at the start of 2012.

“It feels great to be part of a programme like this,” said Pla. “As a driver it means a lot and I feel very proud and pleased to become a works driver for Nissan. The challenge is very exciting and I’m more than ready for that. During the last three seasons in particular, the level of competition in LM P2 has become incredibly high so it is the perfect place to train for LM P1.

“This will be quite a new experience for me,” he continued. “On track the LM P1 cars are very sophisticated now with their energy recovery systems and fuel allocation rules so there will be a lot of work to do on strategy. Off track the LM P1 class certainly attracts more media attention so it will be a busy season. I want to win Le Mans and I think, with Nissan, I am in the right place to do it.”

Harry Tincknell meanwhile is picked up for a factory seat after just a single year in sportscars, albeit a year that saw him far from out classed by his Audi factory driver team-mates at Jota Sport as he and the Kent based team took an impressive string of results including the LMP2 class win at Le Mans

“We chose to look within the Nissan family to find drivers who have done a great job for us and provide a good mixture of youth and experience,” said Darren Cox, Global Head of Brand, Marketing & Sales, NISMO. “Matsuda san needs little introduction as he is the reigning Super GT Champion. Harry and Oli stood out for their professional performances alongside our NISMO Athletes in Nissan-powered LM P2 cars. They are great endurance racers and it is a pleasure to welcome them into LM P1 as it is also a pleasure for us to now be in a position where we can take our own global talent and take them all the way to the top.”
Harry Ticknell:

“To be offered my first ‘factory’ contract in motor racing with a manufacturer as big as Nissan, is something I have dreamt about since I began karting 13 years ago.

“Nissan Motorsport [NISMO] has 30 years of incredible history while the Nissan Motor Company was founded in 1933 so both have a lot of amazing history. It’s awesome to be a part of their ‘family’ and I’m hoping it will be a long and successful association.

“Entering the LM P1 category is a big step and especially with its bold innovative design but that’s how Nissan goes about its business.

“With us [Nissan] joining the other three LM P1 manufacturers, I believe another golden era of exciting sportscar racing is about to dawn and interest can only grow.

“I’m very excited to be graduating in to the LM P1 category after just one year in sportscars having raced a Nissan engined LM P2 car in 2014. Moving from Formula Three single-seaters to sportcars was a big step and now graduating up in to LM P1 will be another giant leap for me with a lot to learn.

“2014 was an incredible year for me. Winning the LM P2 category and finishing fifth overall on my Le Mans debut – not many other drivers, if any, have achieved that. Personally achieving a 100% record by claiming three ‘poles’ in my maiden European Le Mans Series season in which I was awarded ‘Rookie of the Year’. I couldn’t have dreamt of making such an impact.

“I learned a massive amount about sportscar racing last year and Nissan has put its faith in me. I’m confident that I’ll quickly adapt to LM P1 and Nissan’s latest hybrid technology and there is no question of letting them or myself down.

“I’m really happy the deal has now been announced. I can now get on with testing prior to competing in my ‘home’ race at Silverstone in April.

“Obviously racing against drivers like Mark Webber and Anthony Davidson, who I watched on TV in Formula One when I was younger, and current F1 driver Nico Hülkenberg, in my first full year in the WEC is simply incredible.”

“It is an honour for me to race the Nissan GT-R LM NISMO at Le Mans,” said Matsuda. “I have dreamt of racing at Le Mans since I was a child. I know it is is one of the most demanding races in the world but that is why I want to do it. In order for me to succeed in this new challenge, I am hoping to make good use of my experiences from last year when I competed in two races in a Nissan-powered LM P2 car. The race will be very tough but I am excited to have been given the opportunity to take part in this challenge. I will do everything I can to make sure we get a good result in the race.”