This item was first posted on DSC back in 2005

It’s been an astonishing five years for the Care Racing Ferrari 550 programme and the final round of the 2005 FIA GT Championship, at Bahrain this week, could just see a very significant result for the car. 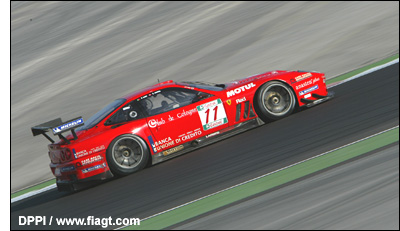 If the Larbre Competition entry of Gabriele Gardel and Pedro Lamy triumphs in Bahrain, as it did at Dubai, right, it will seal the title for the former, and secure the 50th race / class win for the Prodrive-built Ferraris.

The sports car racing division of the Care Group was created in 2000 and started in partnership with Prodrive, for the development of a racing version of the Ferrari 550 Maranello, to compete in the FIA GT and then ALMS Championships.

In a racing history which has almost paralleled the Audi R8, the Prodrive-built and developed cars have humbled the Ferrari factory’s own version of much the same car (the 575 GTC) and have gone head to head with everything from the factory-run Chevrolet Corvettes through to the Maserati MC12s, and are still ultimately competitive, having now clinched the 2005 LMES GT1 title – making three consecutive seasons of title winning form for the cars.

Of the major endurance races, the cars have triumphed in the Spa 24 Hours in 2004 (with the same chassis scoring a class win, but second overall, to the Freisinger Porsche the previous year) and the ‘GT1’ win at both the Le Mans 24 Hours and Petit Le Mans in 2003.

Another astonishing statistic is that the cars have triumphed in the ‘GT1’ class in nine out of 10 of the LMES races so far (including the 2003 ‘preview’ race at the Bugatti circuit), just the 2005 Nurburgring win by the Convers Bank (Cirtek) Aston Martin spoiling the sequence – ironically the ‘next generation’ GT1 project from Prodrive.

With the project majoring on providing a well engineered, reliable and blindingly fast package for customer teams, the above results are perhaps no surprise. All in all though there have been 47 pole positions, and a further 66 podium finishes to add to the 49 race wins so far. That total includes Oschersleben in 2004, when the Maserati MC12 was first past the flag, but didn’t score points.

Those race wins have come in not just the LMES and FIA GT Championships, but also the ALMS and French, Italian and Spanish GT Championships. In fact, of the championships in which the cars have appeared, only the Japanese domestic series has failed to yield a win and the rules are rather different there.

Prodrive have produced a total of 10 chassis:

The first chassis, built in 2000 (Care Racing 01/2000 – Chassis 107617) and first raced by the Prodrive team in July 2001 at the Hungaroring. The first race ended in a DNF, electrical troubles finishing its run. There were however two race wins in its debut season, at the A-1 Ring and Jarama.

The first car continued to race in the FIA GT Championship (apart from a single outing in the Spanish GT Championship in 2002) before transferring in 2005 to the MenX squad and the LMES, scoring the team’s first GT1 win this season at the Silverstone 1000kms. 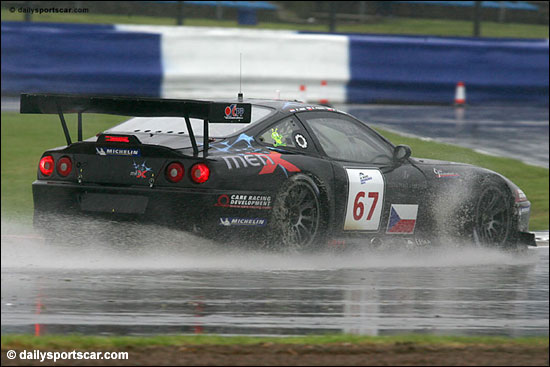 The second car (Care Racing 02/2001 Chassis 108418) again originally raced in the hands of the factory team and again its first outing ended in a DNF, this time though in the ALMS at Petit Le Mans in 2001. A Sebring outing in 2002 (actually classified sixth in class, though a long way back) was its final action for Prodrive, before passing to BMS Scuderia Italia.

It has raced for the crack Italian squad ever since, and is one of the most successful of the cars, having scored a total of 14 race or class wins (including the overall win at the Spa 24 hours in 2004, below, the class winning second overall at the same race the previous year and the 2004 FIA GT Championship). 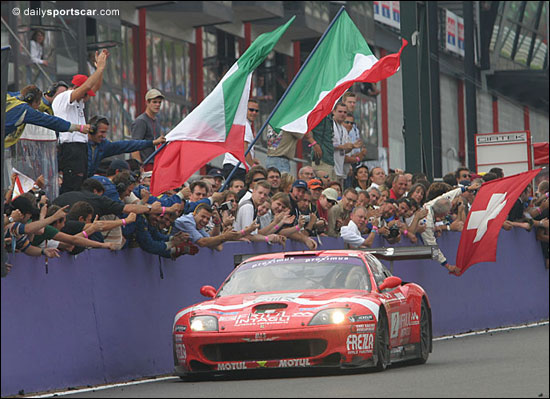 This same car has also scored race wins in both the Spanish and Italian GT Championships and has a total of 15 pole positions and 15 other podium finishes to its name.

The third of the line (Care Racing 03/2001 Chassis 113136) made its racing debut at the 2002 Le Mans 24 Hours and led the class convincingly in the hands of Enge, Rydell and Menu, setting the fastest GTS lap of the race – until a fire ruined the day for all concerned. 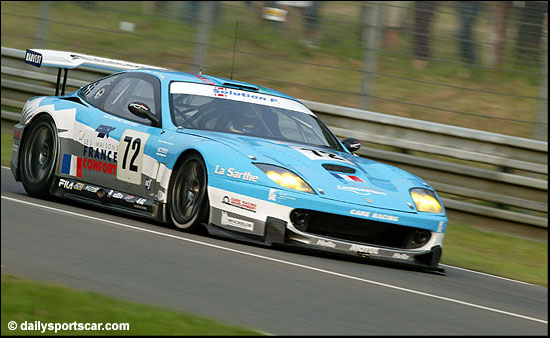 This car has raced at Le Mans no fewer than four times (2002 and 2004 with Prodrive – in ‘04 it was the Colin McRae car), 2003 saw it in French Blue for Luc Alphand Aventures – Solution F (above), and this season with Russian Age Racing – a car that has been painted red, then blue, back to red and then blue again! 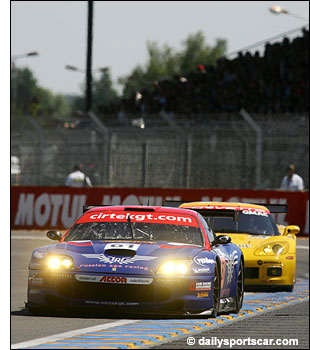 Its racing career continued after its Le Mans debut with three races in the 2002 ALMS, before returning stateside in 2003, where it would form a key part of one of the most compelling, season-long sportscar battles of the modern era, a pair of the 550s taking the fight to the factory Corvette C5-Rs. ’03’ would take three wins in the 2003 ALMS, before being flown back to Europe to take the honours in the inaugural LMES race at the Bugatti circuit too.

The Le Mans / McRae “Very Happy To Be Here” outing was the car’s only 2004 race action, before joining Rob Schirle’s traveling sportscar racing circus in 2005, Cirtek’s new Russian backers ensuring that the car was kept busy in both LMES and FIA GT championships – and at Le Mans, right. 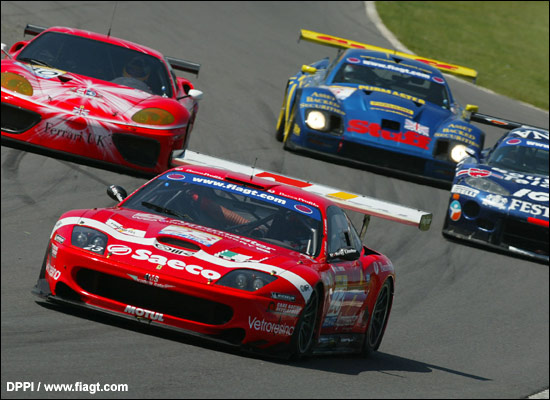 2005 saw its main business transfer to the Italian GT Championship, and a second championship win, this time for Ramos and Malucelli. It did however have one international outing this year, the opening round of the LMES, the Spa 1000kms, where it took a win for Gollin, Ramos and Cressoni.

All in all, this car has scored 15 race wins, nine pole positions and 13 other podium finishes. 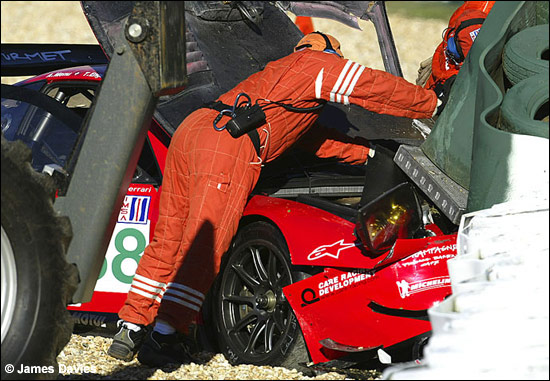 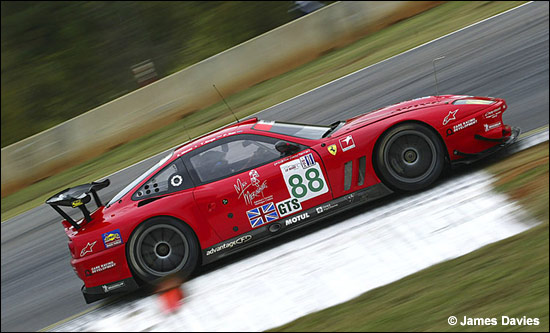 There were second places too at both Sebring and the Bugatti LMES ‘preview’, before the car passed into the welcoming arms of Jack Leconte at Larbre Motorsport, for a double campaign in the FFSA French GT Championship and the LMES. Whilst the FFSA Championship campaign fell a little flat, the car swept to the 2004 LMES GT1 title with a clean sweep for Bouchut / Lamy and Zacchia, with all four class wins.

2005 saw the car stay with Larbre, but switch to the FIA GT Championship, in addition to the FFSA Championship, Balthazard and Policand taking second place in the French championship.

The car also contested the 2004 Le Mans 24 Hours for Larbre.

Why? Well it might have something to do with the fact that it is the 2003 Le Mans class winning car and also finished second overall in the 2003 ALMS. It has not raced since the end of the 2003 season. Davies, Enge and Kox enjoy that ‘Le Mans moment’. 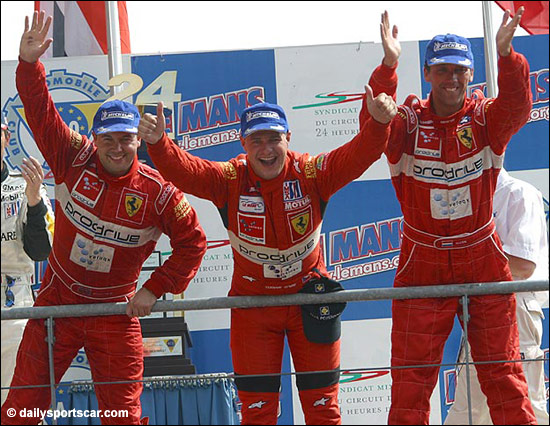 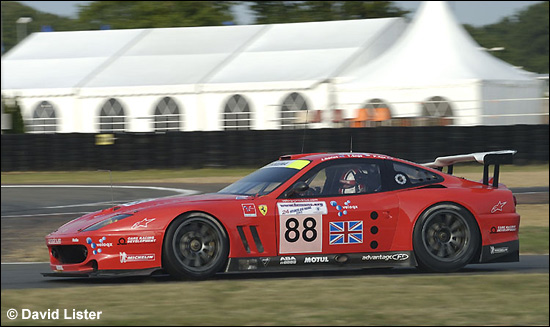 Delivered new to Hitotsuyama Racing in Japan, it has competed exclusively in the JGTC (now Super GT) against the might of the Toyota, Nissan and Honda factory hordes. Ultimately uncompetitive with the GT500 pseudo prototypes, time will tell whether we might see the car in the new for 2006 All Japan Sports Car Endurance Series.

2004 though saw it qualify on class pole at Le Mans for the Prodrive team, before joining Larbre for the Spa LMES round.

2005 saw a DNF at Sebring, before the car settled into its full season, FIA GT campaign. It also contested the Le Mans 24 Hours. A race win at Dubai on November 18 means that the final 2005 race in Bahrain could see the car take the drivers’ championship for Gabriele Gardel, Lamy and Gardel having taken three wins overall this year (Monza and Brno, below, plus Dubai), against the convoy of Maserati MC12s. 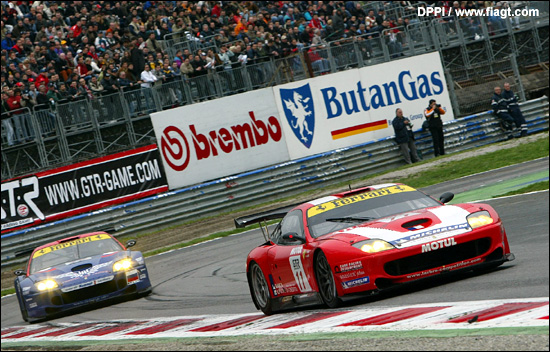 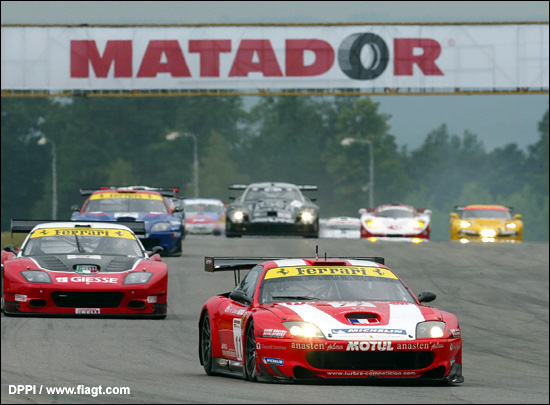 As car #51 it has netted the 2005 LMES GT1 title for Pescatori / Bartyan and Seiler, a total of two class wins and a further pair of podium finishes good enough to see off the challenge from an additional trio of Care Racing 550s. 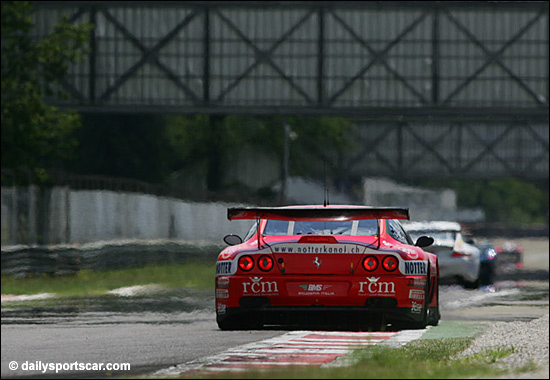 The final car (Care Racing 10/2005 Chassis 114946) became the fourth BMS Scuderia Italia 550, and has spent its first season contesting the LMES (as #52, but not at Spa – see 112886, above), and with an unsuccessful appearance at Le Mans. At present it shares the unfortunate distinction (shared with the car racing in Japan) of not (yet) having won a race.

Prodrive’s in-house team (racing at times as Care Racing Development or, in 2003 supported by Sam Li’s Veloqx outfit) has seen much success (eight race wins – but not as many as Care Racing’s most loyal customer team). BMS Scuderia Italia has scored 60% of the car’s victories so far (30 wins) and currently run four of the 10 cars built, both in the LMES and Italian GT Championship.

Jack Leconte’s Larbre outfit scored their ninth win with the 550 at Dubai. MenX has scored a single win in the LMES (Spa 2005) whilst Cirtek’s efforts in both LMES and FIA GT, Solution F’s solo outing at the 2003 Le Mans 24 Hours and Hitotsuyama Racing’s Japanese GT campaigns have all so far left them without an appearance on the top step of the podium (though Cirtek did of course beat the 550s with their Aston Martin at the Nurburgring).

32 different drivers have been carried to a win by the CARE Racing cars (including a single win from Frederic Dor, the man whose backing enabled the cars to be built in the first place).

The ‘winningest’ pilot is none other than Luca Cappellari (right), the 2004 FIA GT Champion having profited greatly in the trophy cabinet department from his 2005 Italian GT Championship campaign.

On the right, he’s pictured atop the 2004 FIA podium at Monza, with partner Fabrizio Gollin – and his big ‘thumbs up’ fits perfectly in front of (575 driver at the time) Fabio Babini!

A total of nine race wins for Cappellari beats the score of Matteo Bobbi by one, with Miguel Ramos and Fabrizio Gollin being joined on a total of seven wins just last weekend by Pedro Lamy. Malucelli and Biagi are next up with six wins apiece whilst Peter Kox, Jean-Denis Deletraz and Gabriele Gardel have each scored five.

Lamy to reach eight later this week, and Gardel six?

With thanks to the ever helpful Fiona Miller, and the excellent www.careracing.com website, which contains a mass of fascinating information: it is a wonderful tribute to the racing record of this amazing, privately developed, car.