The #7 Audi an #18 Porsche continued battling as the fifth hour began. The pair were split up when Lieb ran off the circuit with a tank-slapper at the exit of Stavelot lapping the Alpine.

It was a scary moment, and luckily the pressure was reduced soon after when Lotterer pitted the lead Audi to hand it over to Benoît Tréluyer. Porsche therefore held the lead once again, and continued to when the #18 pitted for fuel only. The lead margin when the top two were back on track was over 20 seconds, with Lieb holding the advantage. 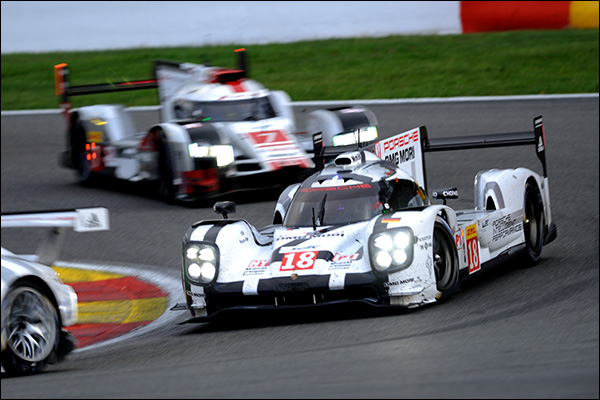 Tréluyer’s pace on fresh rubber was enough to get the #7 Audi back into contention however, as in just 15 minutes the Frenchman had reduced the margin by 11 seconds. And then ended up bumper-to-bumper with the Porsche as we reached the halfway point in the hour.

The scrap really started at the bus stop on lap 48 when Tréluyer dived up the inside, Lieb got him back at the Kemmel Straight on the next lap though, using the superior straight-line speed of the 919. Tréluyer eventually made it stick with a great move at Pif Paf round the outside, with Lieb pitting the #18 soon after for fresh rubber and to hand over the Neel Jani.

After a lengthy period of quiet, second spot in LMP2 and GTE Pro changed on the same lap. Gianmaria Bruni made a move to take second spot off the #97 Aston in GTE Pro driven by Rob Bell, and Sam Bird started limping round the circuit with a suspected engine issue in the #26 G-Drive Ligier. Smoke was pouring out the left-side exhaust, prompting a stop for the team , utilising the garage for a full diagnosis. 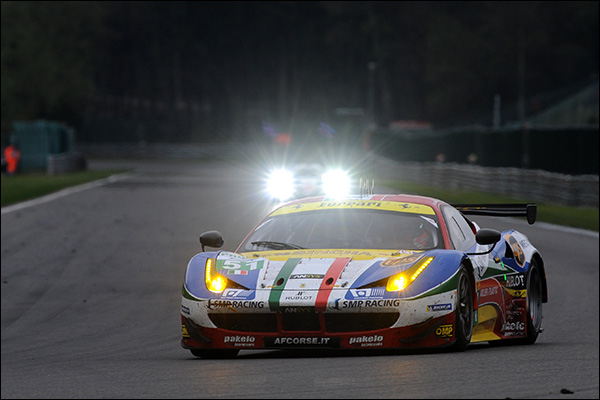 When the next set of stops occurred for the P1 runners, the lead margin was over 10 seconds in favour of the #7 Audi, Jani was able to reduce the gap a little during the rest of hour 5, there’s just one stop left for the leaders.

Bruni’s charge in the #51 458 continued as the hour started to close also, with the gap to the leading #99 Aston Martin just a few tenths with a few minutes left in the hour as the Italian veteran looked to steal the glory from the British marque.

Pretty much as we started the sixth hour Bruni made his move at the Bus Stop to give AF Corse their first lead of the race.