LMP1
In a continuation of the second qualifying session, the LMP1 field appeared to be preparing for the race rather than going for outright pace. Nobody could match or beat Jani’s eventual pole-scoring 3:16 from Wednesday night. 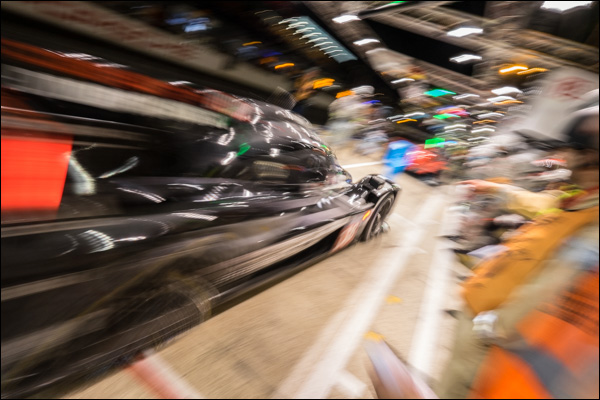 Multiple yellows and a red flag prevented the extended two-and-a-half-hour final session from becoming truly rhythmic as almost all of the improvements in lap time came from the Nissan camp, who continue to learn their way round La Sarthe.

Many of the runners flirted with 3:20s at the start of the session, but the only notable lap came from Harry Tincknell who bettered the #22 Nissan’s time to put it 14th overall with a 3:38.837. That kick-started a flurry of improvements by Nissan throughout: that lap still didn’t put it ahead of all the LMP2 runners, but it did put it just four tenths shy of the #23’s best lap from the night before.

The #13 Rebellion was back out and running after the shunt during the earlier session with Kraihamer at the wheel. He managed to improve the car’s overall lap time as night fell, but a 3:29.030 wasn’t good enough to move it ahead of the sister car in ninth overall.

The session’s notable events in LMP1 continued to be centred on the trio of Nissans. The brand finally achieved a lap that put one of its cars faster than all the P2s before the race with over an hour to go, a 3:37.291 by Jann Mardenborough in the #23 putting it 12th overall. 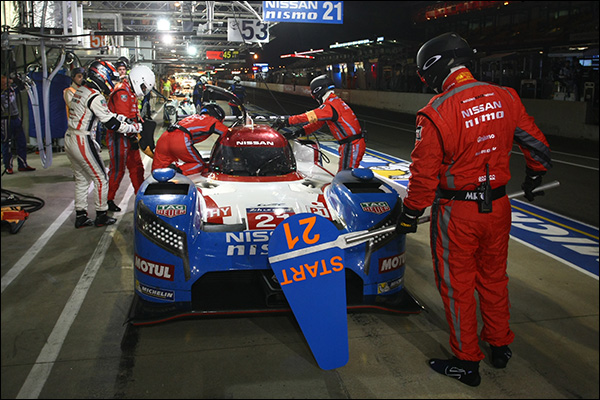 Lucas Ordonez was also improving and moved the #21 up to 14th and briefly second of the three NISMOs with a 3:38.619. It eventually qualified 15th.

After an extended red-flag period following the #67 AAI Porsche’s fire in the final hour, Harry Tincknell continued the improving trend in the #22 and set a 3:36.995 to become the best-placed NISMO on the grid and finish just a tenth off the ByKolles CLM on ultimate pace. That was the fastest time a GT-R LM NISMO has ever set around Le Mans.

So in the end Porsche swept qualifying, with the #18 leading the #17 and #19. Audi sits fourth, fifth and sixth and Toyota lurks in the background in seventh and eighth.

LMP2
There were some hopes that bringing the start of the final session forward by half an hour would play directly into the hands of the teams, but it didn’t. Those golden few minutes that traditionally mark the start of the second Thursday session may have been extended to almost an hour, with night yet to fall, but nobody seemed able or willing to exploit the opportunity. Technically, of course, the whole session would be classed as ‘night’, so a perfect opportunity for any drivers yet to complete their requisite laps to do so, in daylight. Perhaps sending out the less experienced drivers to benefit from the easier conditions accounted for the failure of anyone to post better times, or perhaps the conditions simply weren’t right.

At spot on half-past, the cars were released from the head of the queue, with the two Toyotas first to appear, given a few seconds head start before the first of the red Nissans followed them, and then the rest of the field. All but a baker’s dozen of cars headed out right at the start, and most of the rest joined in within five minutes or so.

Eight minutes gone and the Ibanez #45 was noted as moving slowly towards the far end of the Mulsanne, the yellow Oreca making a measured return around the circuit. The car hadn’t participated in the previous session, so whatever had prevented an earlier appearance had clearly not been corrected. It was a painfully laboured tour, but the car did make it back to the pitlane, where it was immediately hauled backwards into the garage.

Elsewhere in P2, most cars were consistently setting times that still fell several seconds short of their best from Wednesday, with the exception of Kevin Estre in the #34 Ligier, who managing to get within a few tenths of the car’s 3:40.058 target peak.

The first order change in P2 came from Tristan Gommendy, clocking 3:39.805 to move the #46 Thiriet by TDS Oreca through to fourth in LMP2. It was about the only moment of significance during what was a notably unremarkable first half hour. Hopes that dusk might bring improvements, thrills or drama had been comprehensively dashed.

There were very few moments of note. Ollie Webb posted a 3:41.250 to gain a position for the #43 Team Sard Morand Morgan Evo (at around 9:05) to tip the Murphy Oreca down to 10th in class, 24th overall. Karun Chandhok, having taken over from Mark Patterson, got nail-bitingly close, but then pitted to hand over to Nathanaël Berthon for the final minutes of dusk.

Jon Fogarty did manage a modest half-second improvement for the #31 ESM Ligier, with a new best if 3:44.169, but without troubling the class order. Moments later the #37 SMP BR01 suffered a fiery moment in the pitlane, swiftly extinguished, and apparently left rear brake area related, possibly rubbery debris?

An incident for the #98 Aston enacted a slow zone through Mulsanne Corner that started at around 22:18 and remained in force for nearly 10 minutes. This effectively precluded any fast laps for the duration. Meanwhile, darkness had properly descended across La Sarthe.

Problems for the #46 Thiriet by TDS Oreca became apparent just after the half hour, with the car reported as slow, first at the run through to the second chicane, and then nearer Mulsanne, where it apparently stopped at 22:41. Meanwhile the #41 Greaves Gibson went for a spin through Dunlop (Gaetan Paletou at the wheel), recovered quickly and continued, no repeat of Wednesday’s wall-banging.

Just to prove it was possible, Paul-Loup Chatin coaxed the best part of an extra second out of the #36 Signatech Alpine to move the glossy blue A450b through to fourth in LMP2 at five minutes before the hour. To that point, the new best; 3:39.699, was comfortably the quickest P2 time of the evening, despite being 1.6 seconds shy of provisional class pole.

The top of the hour was marked by a succession of GT spinners, first the #68, pirouetting down through the Esses, and then, more significantly, the #71, ploughing into the tyres at the Indianapolis left-hander. Race Control imposed an extended slow zone as a result that lasted several minutes, but when it cleared, Sam Bird marked the release with a new fastest lap for the #26 G-Drive Racing Ligier JS P2. His 3:38.939 was a second better than the orange and black coupé had managed before, and earned him a provisional front-row slot in P2.

Five minutes later, at 23:07, the red flags were waving again. The #67 Porsche was seen, engulfed in flames, just beyond Tertre Rouge near the start of the Mulsanne. The car had been spotted descending through the Esses with smoke and sparks visible from the rear left wheelarch, but it had only managed another quarter mile before Alex Kapadia had been forced to pull over. It was some time before the marshals had the fire under control, and the future for the car looked doubtful. The session resumed with just half an hour remaining.

Heading down through the Esses soon after the restart the Greaves Gibson #41 appeared to become unsettled at the rear, and as a shower of sparks erupted from the back end of the car, the front-left wheelarch flipped up into the air, flew high over the roll hoop, and landed on the track behind. Gary Hirsch returned to the pitlane for fresh bodywork while the marshals braved the track to retrieve the errant bodypart.

As the session neared its conclusion, and one has to say that it was almost a relief when it did, there were just a couple of twists in the tail. The #45 Ibanez Oreca suffered what appeared to be a gravelly incident at the first Mulsanne Chicane, apparently on Bellarosa’s out-lap, and then the managers of cars #30 (ESM), #36 (Signatech) and the unfortunate #45 were all summoned to race control. 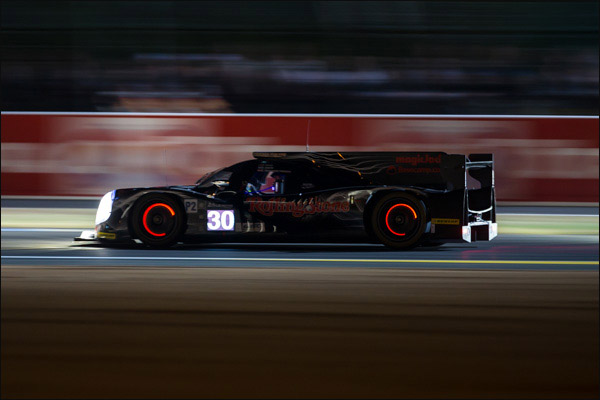 The chequered flag fell on what had been, in the end, a less than memorable three sessions of qualifying. The original high expectations that the impressive first flurry on Wednesday evening had generated subsequently proved to be wholly unfounded, and everything then descended into something that was both dull and uninspired.

In the end, pole in LMP2 went fairly comfortably to the #47 KCMG Oreca 05 coupe, almost a full second clear of the #26 G-Drive Ligier. The Greaves Gibson #41 claimed third from the similar Jota chassis, #38 in fourth. Perhaps notable by its absence from the upper echelons of P2 was the Murphy Prototype Oreca, one of the fastest cars in the class all season, but hampered here by Mark Patterson’s off in free practice and never quite on the pace ever after, clinching eighth at the flag. 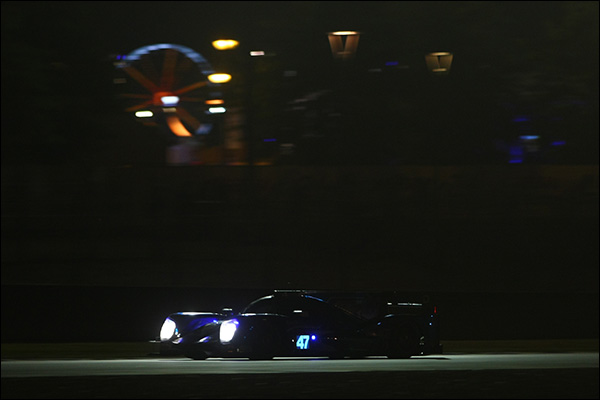 GTE Pro
At the off, Jorg Bergmeister was again the man to watch in GTE Pro as he moved up to sixth in class ahead of the #64 Corvette courtesy of a 3:56.741.

Bruni in the #51 Ferrari was the big mover, though, finally getting last year’s winning car back where it belonged in the top three with a 3:55.025, just a tenth off the #99 Aston’s benchmark from Wednesday. 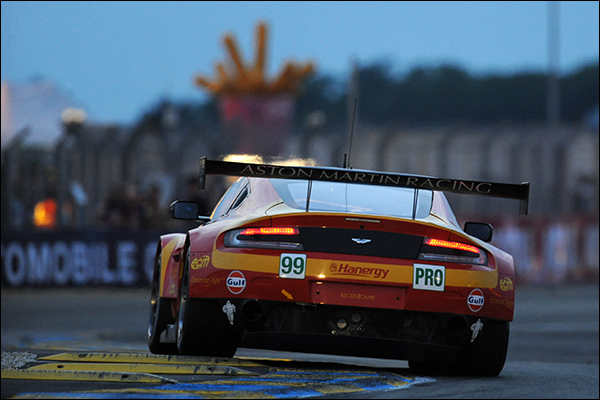 Calado was doing similar in the #71, getting from sixth to fourth in class with a 3:55.582 at just after 10pm, the originally scheduled start time of the session. Just before 11pm, Olivier Beretta was at the wheel of the same car when it went into the gravel at Indianapolis, bringing out a local yellow.

Just a few minutes later, a red flag was thrown as a GTE Am Porsche caught fire on the Mulsanne and the track stayed neutralised until 11:30pm.

A slow zone in turn four due to a stray piece of LMP2 bodywork kept lap times in check initially, as did another for the #95 Aston Martin, which had an off with Marco Sorensen at the wheel in the Esses and was winched away by a recovery truck. 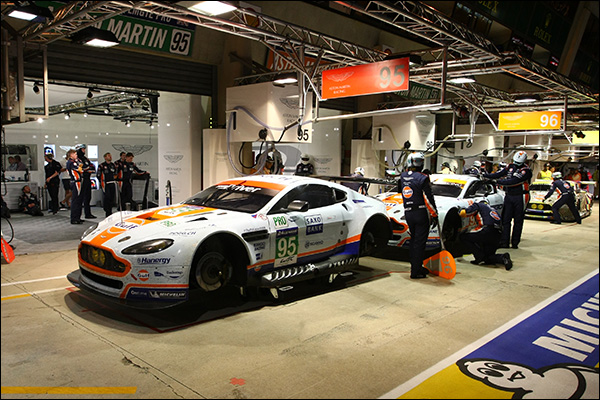 In the end, the session played out with a whimper rather than a bang in the last 10 minutes, and the final GTE Pro grid looked rather as it had after Wednesday’s first qualifying session:

GTE Am
Pat Long’s 3:59.430 was an improvement for the #77 Proton Porsche, but not enough to move it out of fifth in class. One car that did move up early in the session was the #53 Viper with Bleekemolen at the wheel, slotting into fourth in class with just over two hours of the session to run.

The two Prospeed-run AAI Porsches continued to prop up the bottom of the class, but Parisy and Maassen set the #68 and #67’s best times of the week respectively with an hour and 45 minutes to go. 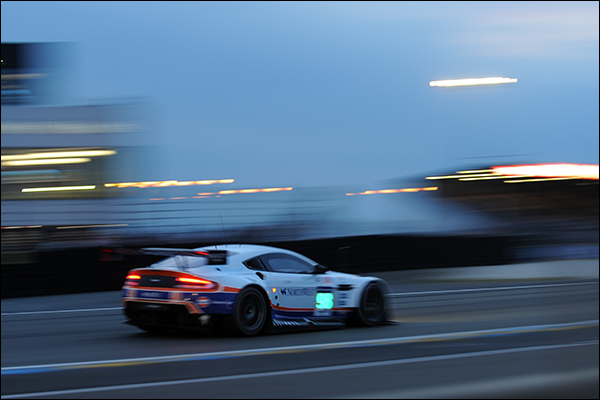 By 10:48pm, little had changed, save for Hall setting the #96 Gulf Aston Martin’s fastest time yet, although it was still one of just three cars (the other two being the AAI Porsches) yet to break the four-minute barrier.

A quarter of an hour later, a red flag flew once again, the #67 AAI Porsche having come to a stop on fire on the first portion of the Mulsanne Straight. Action resumed at 11:30pm, but almost as quickly there was a slow zone in operation at the Esses due to one of the LMP2s shedding a piece of bodywork.

The final GTE Am grid looks largerly similar to how it did on Wednesday night: