The second hour of the race started with Jonny Kane getting it very wrong at the final corner, steering the Strakka Gibson off into the gravel, slipping back behind the Alpine and the #30 ESM Ligier of Ryan Dalziel to seventh. The Alpine didn’t benefit though, as an issue with the power in the car meant Nelson Panciatici lost a lot of time for a couple of laps, allowing Dalziel to climb up two spots. 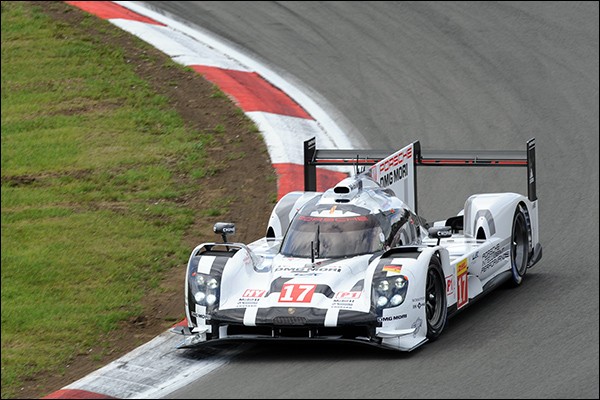 The ESM Ligier’s fortunes didn’t last long though, Dalziel pitted the #30 soon after to hand over to Scott Sharp, and the car never returned to fifth.

At the head of the field, Marc Lieb in the #18 Porsche continued to extend his led, which was now over 40 seconds. The scrap for second spot was heating up though, with the #7 Audi of Marcel Fassler having to defend hard against the #17 of Mark Webber. The Aussie’s pace through sector was was too much for Fassler though, and he slipped past on the inside at Turn 4 going through the first complex.

Webber then immediately started creating a gap, which grew to over 10 seconds within 20 minutes. After 15 minutes of the second hour, Lieb dived up the inside of Alex Wurz to put the #2 Toyota a lap down. The Toyotas seemingly out of contention for a decent result already.

Nick Tandy at the front of LMP2, held a healthy 20-second lead over the two G-Drive Ligiers, even getting past the ByKolles CLM briefly to take seventh overall! 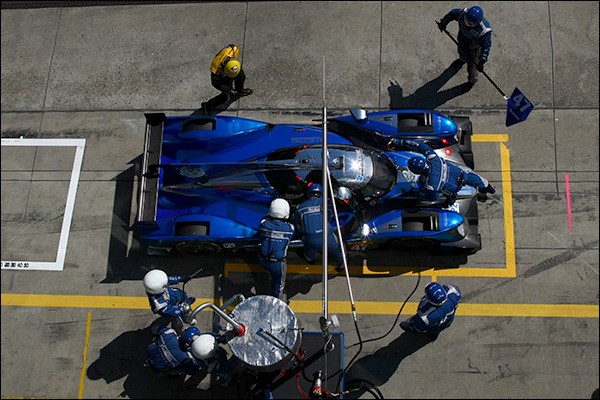 Just as the race began to find a rhythm for the prototype runners, the leader was handed a stop-go penalty for excess fuel consumption which when served, had reduced Lieb’s lead to a few tenths. He had to go defensive right away, into Turn 1 on the run out of the pits, and nudged Webber off the circuit through Turn 2 holding his line; the team elected to pit Webber shortly after, to put Brendon Hartley in the car and split up the two cars out on track.

There was a lead change in LMP2 after the second round of pit stops, with Romain Rusinov in the #26 G-Drive Ligier taking over at the fore from the KCMG Oreca of Matt Howson. A quicker stop by the Russian crew handed the team a 9 second advantage when the top two rejoined the race. It spurred Howson on though, who immediately chipped away at the lead. 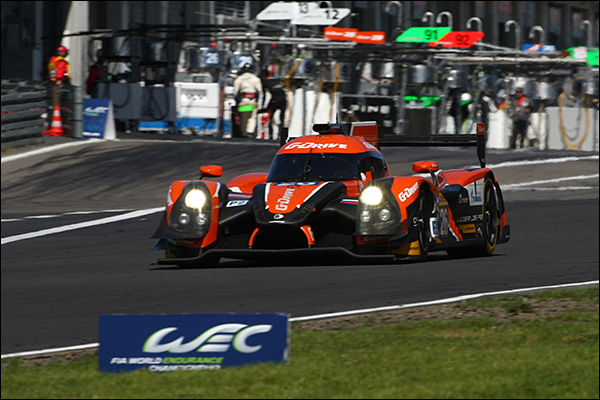 With the second hour almost over, the #18 finally came in for its stop. Romain Dumas took the wheel, and came out second, Hartley driving extremely quickly to hand the #17 the lead of the race by a comfortable margin of 15 seconds. The organisers then called a full-course yellow as the race entered its third hour for debris on the track at the final chicane.

When the race went green again the #18 was penalised two more times for the same problem. Romain Dumas, who was catching Hartley for the lead, would have to serve a 30-second stop-go penalty and then a lap later a minute stop-go. Porsche later revealed that the car was suffering from an engine sensor failure. When the Frenchman rejoined the race after the first of the trips to pit-lane, he had slipped to fourth overall and over 20 seconds behind the pair of Audis. After the second, he was two laps down and only just ahead of the Toyotas. 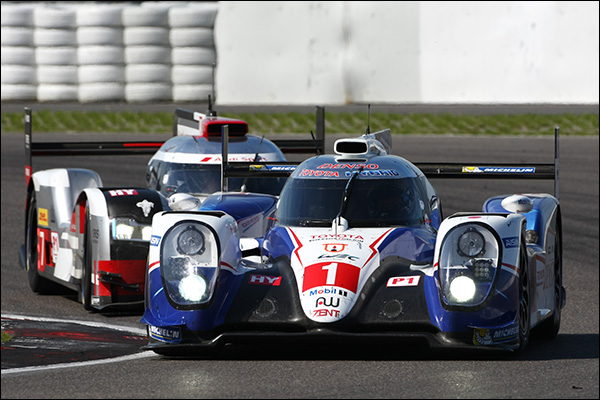 Meanwhile, Matt Howson’s KCMG Oreca had caught Rusinov for the lead in LMP2, and muscled past the #26 going down the pit-straight into Turn 1 to give the Chinese squad the top spot once again. Gustavo Yacaman in the #28 Ligier had also been lapping quickly, and was just a further eight seconds down the road in third place.

With the hour winding down, Audi were clearly beginning to turn up the heat, with André Lotterer and Oliver Jarvis lapping in the high 1:38s – low 1:39s, slowly chipping away at Bernhard’s minute lead. The organisers were then forced to call the third full-course yellow of the day after the rear wing of the ByKolles CLM fell off on the pit-stright, ending up on the racing line.

As the clock ticked over into the second hour, only the #97 (Pro) and #96 (Am) Aston Martins had stopped, although Ruberti took the Larbre Corvette in at about a minute past two and Christensen (#91 Porsche) and Shaytar (#72 Ferrari) were shortly in, too, changing to Richard Lietz and Aleksey Basov respectively. 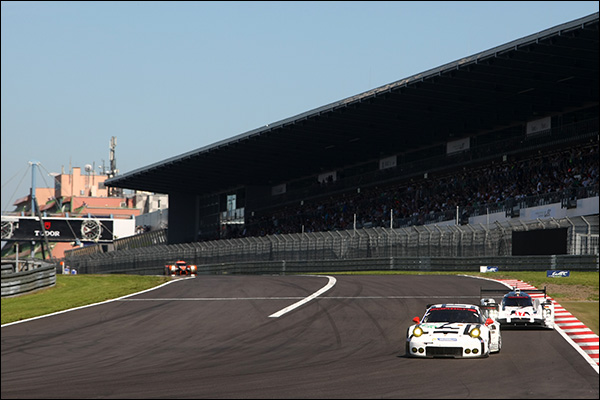 Once everyone had made their stops, Lietz lead in the #91 Porsche, about 16 seconds up the road from Rigon in the #71 Ferrari (started by Calado). The latter car had benefitted from some slick AF Corse pitwork to get ahead of the third-place #92 Porsche, now in the hands of Patrick Pilet. The #95 and #99 Aston Martins lay fourth and fifth in the hands of Christopher Nygaard and Alex MacDowall respectively.

The GTE Am lead was now in the hands of Earl Bamber in the #88 Proton Porsche. The Kiwi had been spun out by another car in his stint and stayed out while most of the field pitted, leapfrogging him past his class rivals to be the second GTE runner overall.

Second in GTE Am was Paul Dalla Lana, now aboard the #98 Aston started by Lamy, with Patrick Dempsey third in class, having taken over the #77 Proton Porsche from Pat Long. Ferrari men Francois Perrodo (#83) and Basov (#71) were fourth and fifth in class, 20 minutes in to the second hour. Dalla Lana then moved into the lead when Bamber came in to hand the #88 car over to Khaled Al-Qubaisi, who emerged second in class, just under two seconds behind the Aston. 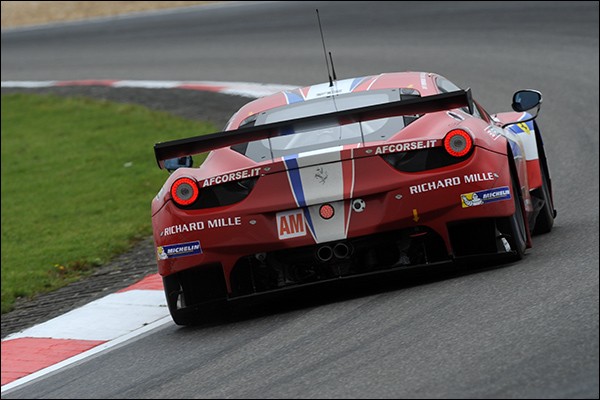 There was no change in the order until Perrodo got past Dempsey for third in GTE Am about 45 minutes into the second hour. Lietz had stretched his GTE Pro lead to about 20 seconds from Rigon, but Dalla Lana and Al-Qubaisi were still in touch at the head of GTE Am. The latter seemed to fade a bit during his stint, possibly due to a warning for track limits violation and was almost 10 seconds off the Aston as the two-hour mark approached.

There was further woe for the Abu Dhabi driver on lap 54 when he took a trip through the gravel at the Dunlop hairpin, although he managed to just about hold on to second in class from Perrodo.

A full-course yellow was called just as we moved from the second to the third hour to allow marshals to sweep up gravel at the final chicane. This allowed almost all of the GT runners to make their second scheduled stops slightly earlier than planned.

Once everyone emerged, the #91 Porsche was still leading, now with Christensen back behind the wheel. Calado was running second in the #71 Ferrari having taken back over from Rigon and Makowiecki was third in the #92 Porsche after Pilet’s stint at the wheel. The #95 and #99 Astons continued to run fourth and fifth in GTE Pro.

In GTE Am, Mathias Lauda inherited the lead in the #98 Aston, with Rui Aguas moving up to second in the #83 Ferrari having taken over from Perrodo. Christian Ried was now third in the #88 Proton Porsche, a place ahead of its #77 sister car, now in the hands of Marco Seefried, who wasted no time reversing those positions to move into podium contention. In Pro, Ferrari’s second-place man Calado came under serious pressure for his position from Makowiecki in the #92 on lap 67, 15 minutes into the third hour. 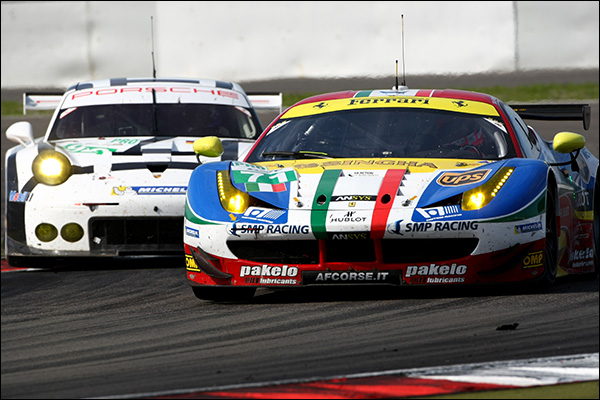 An off-track moment from Aguas saw him slip to sixth in GTE Am, promoting Seefried to second, Ried to third and a charging Andrea Bertolini in the SMP Ferrari to fourth. The made an ambitious lunge on Reid at the first corner, but overshot on the exit. The Italian made a move stick a few corners later, taking the Le Mans GTE-winning car into a podium position in the class. Meanwhile the Calado/Makowiecki battle for second in Pro raged on furiously.

In the confusion of a gaggle of GT runners being lapped by two Audis on lap 74, Kristian Poulsen got the Larbre Corvette ahead of Ried’s Porsche for fourth in GTE Am. Meanwhile, Makowiecki’s pursuit of Calado seemed to lose momentum somewhat as he fell to around a second clear of the Ferrari, while Lauda’s lead at the head of Am approached 30 seconds.

So as the half-way mark approached, Christensen was 25 seconds to the good over Calado, with Makowiecki still right on the #71 Ferrari’s tail. Sorensen was having a lonely race in fourth in the #95 Aston and it was a similar story for Rees in the #99. Johnny Adam was doing as best he could in the below-par #97 Aston, sitting sixth in the GTE Pro class. Lauda was holding the aforementioned commanding lead of GTE Am, ahead of Seefried’s Porsche and Bertolini’s Ferrari. 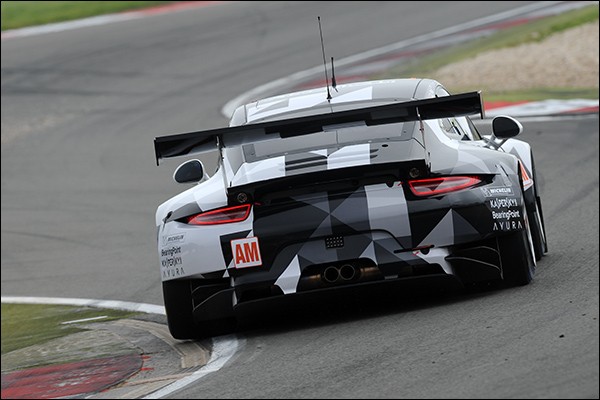 Ten minutes before the half-way mark, the #88 Porsche spun and continued at turn 10, showing some front-end damage. Also, the ByKolles LMP1 car shedding its rear wing on the front straight resulted in another well timed full-course yellow, leading to another flurry of opportunistic stops from the GT field. Separately, Makowiecki hit Calado on the way out of the Dunlop hairpin, leaving the Ferrari with rear bodywork rubbing on its left-rear tyre. The apparent cause was Calado backing off for the yellow but Makowiecki continuing at full speed.