The trio of Mark Webber, Timo Bernhard and Brendon Hartley in the #17 Porsche 919 scored their first win together, in what turned into a dominant performance in front of a huge crowd at the Nürburgring. Engine sensor issues for the sister #18 throughout the first half of the race prevented pole-sitters Marc Lieb, Neel Jani and Romain Dumas from taking the win.

“It was our turn to have a bit of luck,” a jubilant Webber said after the race. “Its the first time we gave Audi a hard time on a short track. It is my first win for Porsche . I wanted to drive for Porsche before I retired and here I am. It is a big personal first victory for me. I am so happy for the 17 crew.” 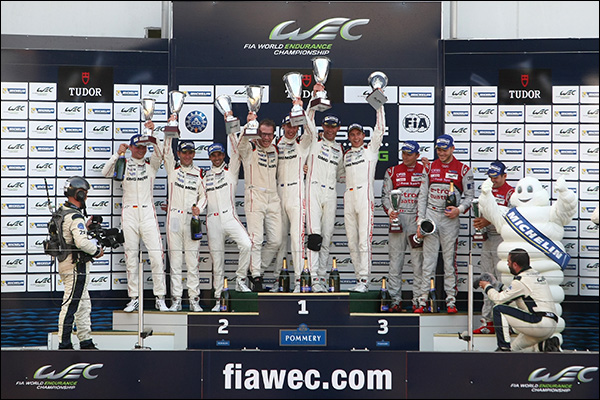 The #7 and #8 Audi R18s came home third and fourth, after a valiant effort to prevent the hard-charging #18 making it a 1-2 in the closing stages; but they just didn’t have the pace to match the Stuttgart-based squad.

Neel Jani built up a healthy lead of over 20 seconds in the first stint of the race from pole position in the #18 Porsche, with the eventual winners holding station behind, the engine sensor was faulty though, and caused the organisers to hand out three crippling stop-go penalties to the team for excess fuel flow. It was a huge set back, and after the third penalty the #18 was two laps off the lead and several minutes behind the ‘four-ringed’ entries. 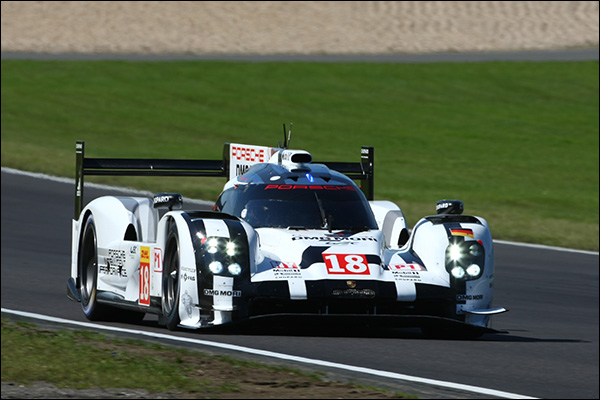 “Neel took off,” said Bernhard. “I could not keep the speed because this piece of carbon stuck in my tyre. Balance of the car was gone but once this was fixed, the car ran perfectly. We had a good balance. Car 18 had couple of issues so we were able to take the lead. Overall a very good day and race. Lots of close races last year, we’ve been looking forward to this moment for a long time. There were lots of close races last year”.

“We are happy tonight.”

But the second half saw Lieb and Jani claw their way back into contention, lapping on average over a second faster than the two Audis ahead making for some thrilling tussles in the final two hours.

Jani picked off Oliver Jarvis in the #8 for third place in the fifth hour, and later caught Benoit Tréluyer to try and snatch second place on track with just over an hour remaining. But the Frenchman ran the #7 ragged to stay ahead, remaining fully committed round the outside through the complex when Jani made his move at Turn 1, holding him off and allowing the #8 (then driven by Lucas Di Grassi) to catch up and pass the Porsche before the round of pit stops later in the lap at the Dunlop Hairpin. 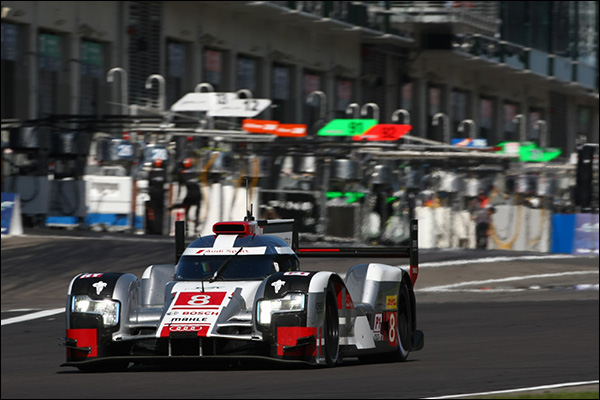 After the three cars pitted though order was resumed, and Porsche held on to claim the top two steps of the podium, with the #7 eventually finishing third ahead of the #8 after team orders intervened in the final few minutes to preserve the marque’s championship hopes. 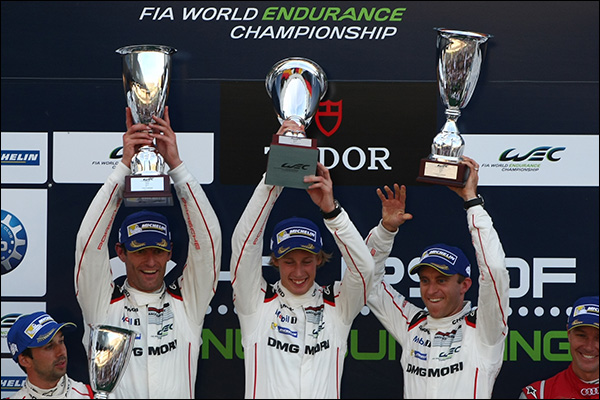 “In the middle of the race, we had a strong car but overall,” explained André Lotterer. “We struggled most of the time with a lot of understeer but we can be happy to be on the podium. We need to make some changes and work harder.”

Behind the two German manufacturers sat Toyota, whose TS040s were nowhere on pace all the way through practice, qualifying and the race; the #1 finished fifth and the #2 sixth, three and five laps off the winner respectively. The car’s development is frozen as the team look toward 2016, so it could make for a very long remainder of the season for the Japanese marque if its performance in Germany is anything to go by. 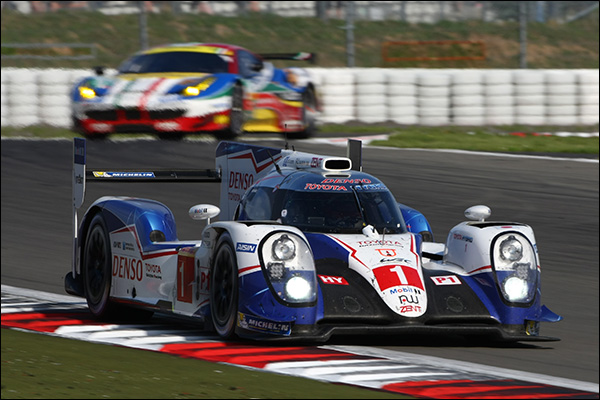 It was another tough day for privateer LMP1 entires too. And an old-school race of attrition broke out from the start, with the ByKolles CLM of Pierre Kaffer and Simon Trummer finishing ahead of the two Rebellion R-Ones (one of which, didn’t even take the start), and 19th overall after losing a lot of time when the rear-wing flew off the CLM while driving down the pit straight.

The sole finishing #12 R-One meanwhile, stopped a few times out on track and spent extended time in the garage at points with mechanical niggles; it limped home 24th. Hopefully we’ll see some real racing between the two teams as they continue to learn more and more about their still relatively new cars in the remaining rounds.

LMP2 was controlled and won by KCMG’s Oreca of Nick Tandy, Matthew Howson and Richard Bradley. The Chinese outfit led the race from the start, but after a slow stop in the first three hours, had to fight back past the #28 G-Drive Ligier of Romain Rusinov which spent the almost the entire race, along with its sister #26 car, within striking distance of the Oreca. The G-Drive squad will nevertheless be pleased to have left the ‘Ring with second and third knowing full well that they can still challenge for wins.

“We came here thinking it would be our weakest circuit, because its high-downforce, so credit to the engineers for moving the car along,” said Matthew Howson after the race. “It wasn’t comfortable, it was so physical and especially after full-course yellows, as I lost control of the car, and so did Richard.” There were times when the three at the top ran very close together, but actual on-track tussles were unfortunately few and far between.

Behind the top three, SARD Morand, Signatech Alpine ended up fourth and fifth. The SARD Morgan ran particularly well throughout with Oliver Webb, Archie Hamilton and Pierre Ragues driving; it’s a well earned result for the team which at the beginning of the weekend, didn’t even have a car to race. 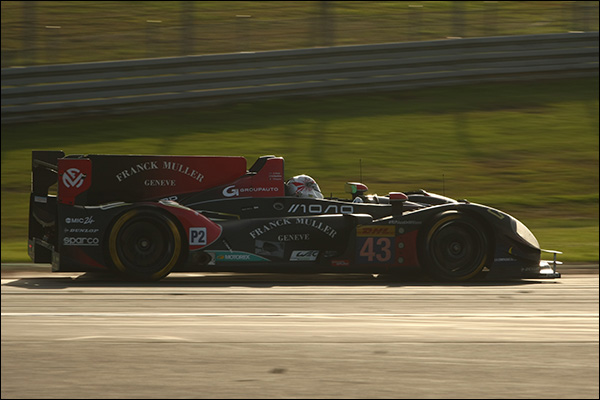 Strakka Racing’s Gibson debut had so much promise, after running well at the Test Day and during the weekend’s practice sessions, but the qualifying and race were a different story. The car ran in and around fifth place after scrapping with the mid-pack runners before Nick Leventis’ stint in the car. The Brit got caught speeding in the pit-lane twice, and had come in for a rear-end change made necessary following contact with a GTE Aston Martin. The Silverstone-based team crossed the line seventh in class.

Webber, Hartley and Bernhard’s first win seemed long overdue, but for Webber in particular it was fitting that his first WEC win came at the same circuit as his first in F1. Next up on the calendar is the round at Circuit of the Americas in Austin Texas on the 19th of September, last season Audi claimed victory at the Lone Star State, but it seems they’ll have their work cut out for them this time round.