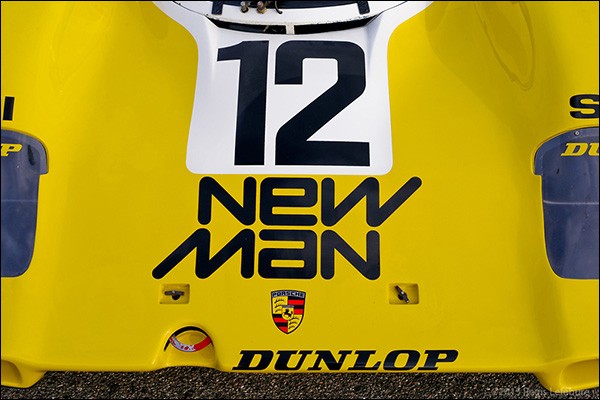 Got your attention? That barely scratches the surface. The Porsche Rennsport Reunion is a mandatory add to your bucket list if it isn’t already there. If you’ve already been to one of the five editions, you’re already watching the 2019 calendar for the next one.

What makes a Rennsport Reunion? An exclusive focus on racing Porsches, a mix of race groups and static displays, a gathering of unique and iconic examples of the marque, and a general admission ticket that gets every spectator access to the entire paddock to mingle among the cars and drivers with almost no ropes to get in the way. 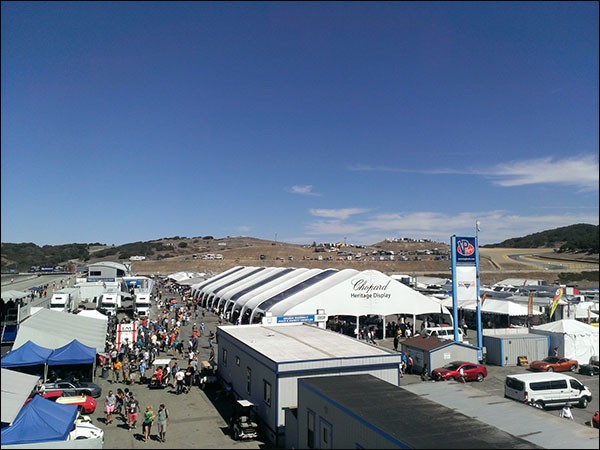 The 2015 Rennsport Reunion was held on September 25-27 at Laguna Seca in California. If you were to pursue a university degree in all things Porsche, you would undoubtedly need to complete mandatory coursework on the marque’s motorsports pedigree before graduating. If you needed to find the best way to cram for the final exam, Rennsport Reunion would be your study guide.

The breadth and depth of cars and drivers was impressive. About 280 cars were entered in six race groups. Over 60 were on static display under a single tent and 15 additional featured cars with Le Mans history were lined up in the Laguna Seca garages. 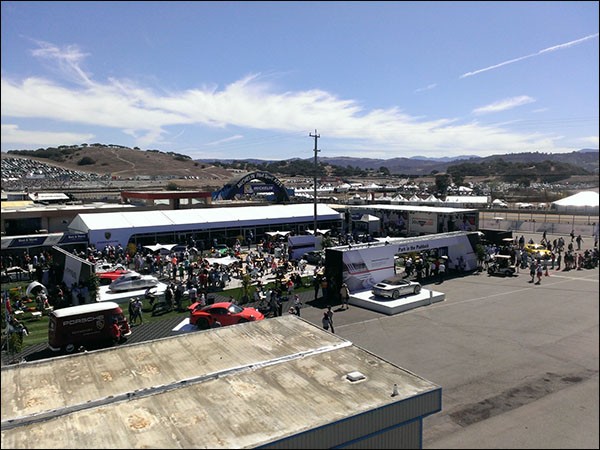 For the spectator, the big question is where to look. At some point, one begins to feel guilty about walking by a low production this or a race-winning that. Every car has a story and a history. Every car has an intriguing journey, many for what happened after their prime racing days were over.

One really has no choice but to get a broad sense of the landscape and then pick a few places to focus. It is physically impossible to do justice to each car, each driver and each story. To provide some perspective, by my count, there were 13 various Porsche 917 examples on-site. Six carried the iconic Gulf colors in short-tail configuration. Two Sunoco 917/30 Can Am cars were in attendance, 005 running on track and 003 on static display. The polesitting Martini 917L longtail (917-042) was on static display. Think about that, most events or museums would be humbled to have but one 917 on display, let alone multiple examples of the model. 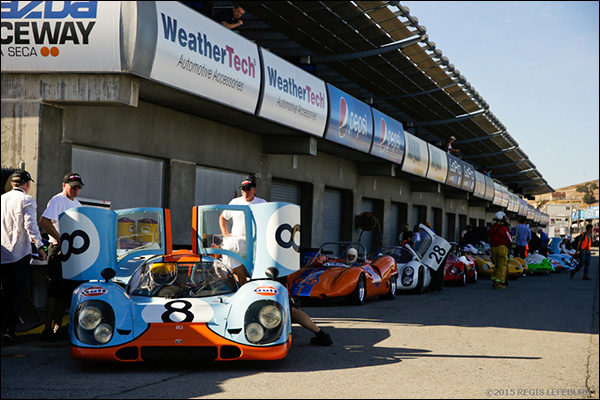 Prefer more modern machinery? In excess of 20 variants of the 956 and 962 inhabited Laguna Seca. Famous liveries of New Man, Jagermeister, Coca Cola, Miller High Life, and Repsol (multiple cars in some cases) were on display or took to the track. Where else could one talk to Bruce Leven about his Bayside Disposal and Texaco Havoline 962 models and turn the corner and find the very first 962 produced that he originally bought and sold to Rob Dyson in 1985 (962-101).

Those that wanted a close look at what will likely be the last Porsche prototype to be run by privateers and sold to private collectors had their choice between seven RS Spyders, half of the total produced. Jeroen Bleekemolen drives a Dodge Viper for his current IMSA employer, but took a yellow ex-Penske 2006 RS Spyder to the win in the feature race on Sunday.

Bleekemolen finished in front of Cooper MacNeil in a 2007 RS Spyder, Patrick Long in the museum’s 962-009, David Donahue in a 2007 RS Spyder (outfitted by Gunnar Racing in blue and yellow Sunoco colors), and Wolf Henzler in a 2012 Falken 997 RSR. The finishing order is ultimately irrelevant, but the event provided a rare opportunity to see that mix of cars together at speed. 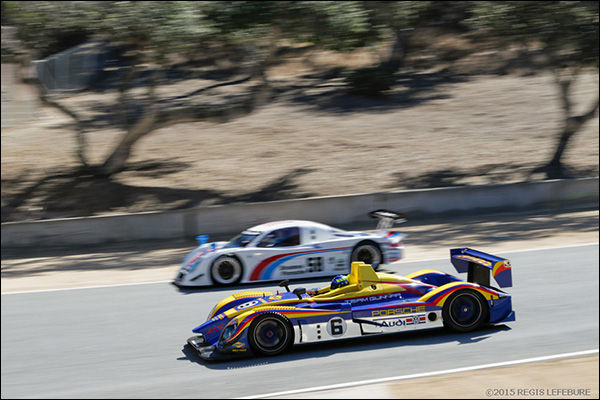 It wasn’t all about the high tech or big horsepower. The early days of Porsche were well represented as well. From the 1950s, several 550 models, RS60 and RSK 718 models, and more 356 and speedster variants than most people know exist circulated on track. 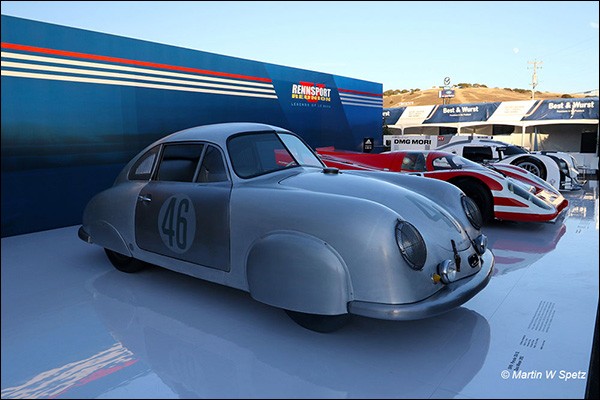 For the 911 aficionado, the full range was represented, including the very rare R and ST models. Of course, those that preferred their 911 race cars with giant flares and wings had entire running group comprised largely of RSR models and variants.

The marque’s Le Mans history was featured in a display pedestal with three pivotal examples. The most recent was a 919 show car. A 917 was on display in the red and white colors of the 1970 Le Mans 24 hour winner (not the actual Le Mans car, but the show car had history of its own as the very first 917 produced). Perhaps the most significant car on the dais was the 1949 Porsche 356 SL (Sport Leicht) that won in class at the 1951 Le Mans 24 Hours, the first win at Le Mans for any Porsche or any kind. 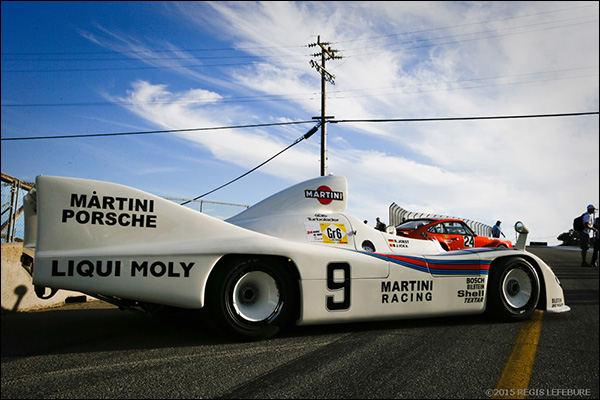 The 919 and 911RSR did demonstration laps at lunchtime. If you weren’t aware, Porsche actually changed the original date for the event to ensure the current factory squad cars and drivers could participate, a clear indication of the importance the factory places on the event. The drivers, cars and mechanics were accessible for spectators to get a close look, get photos, and ask questions, far more accessible than would be the case on race events at places like Le Mans. 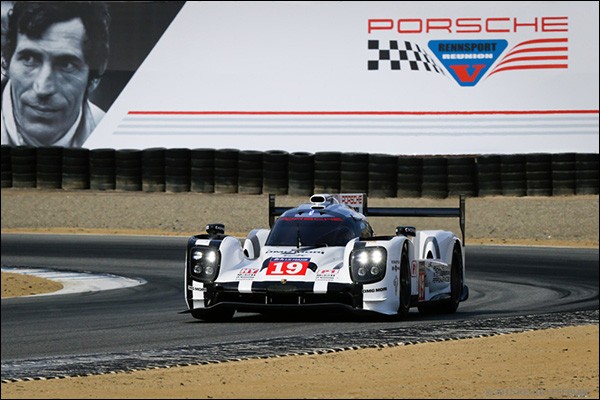 The pace was leisurely on Friday for the benefit of a camera car, but picked up dramatically on Saturday. Both cars were quite aggressive, particularly with the launch out of the last corner onto the front straight. The pace of the 919 in particular was impressive given the rumor that was running only on its internal combustion engine and not utilizing the additional boost that the hybrid energy might have provided.

Nick Tandy set the fast laps in the 919 on Saturday, perhaps a precursor to his success a week later as he and co-driver Patrick Pilet took the 911 RSR to the overall race win and season championship at the IMSA Petit Le Mans at Road Atlanta. The Petit Le Mans race was run in awful conditions and eventually called early due to the rain. Regardless, the race only adds to the Porsche lore by stealing an overall win for a GT car and giving Tandy both the Le Mans win and the Petit Le Mans win in the same year but in different cars.

For a fan of modern GT racing, it seems odd to have gotten to this point without finding an excuse to reference the red/white 993GT1-001 displayed in a place of honor and its sister yellow Rohr 993GT1-108 on display in the heritage tent. Both gathered steady crowds all day, a testament to the staying power of those models. 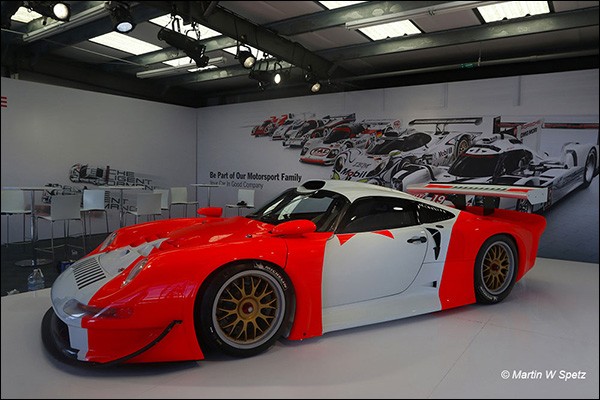 Of course, such an event always provides many opportunities for visitors to empty their wallets. There were long lines for event posters and many vendors with a full range of die cast cars, clothing, and art work. There were also many tents with full recreations and customized versions of iconic models like the 550, 904 and RS. For those with a heftier wallet, there were several cars for sale in the paddock such as the Miller High Life 962 that won the 1989 Daytona 24 hours.

On Saturday, most of the paddock was emptied for a concours along pit lane. The march to the grid made for an impressive parade of cars, many with the pilots that made them famous, as they circulated for a few parade laps before parking in their assigned places. Again, the depth and breadth of machinery across the decades from one manufacturer is an impressive thing to see lined up in one place.

For many, sharing a brief word with the famous drivers or getting a photo or an autograph was clearly a high point. The “Reunion” aspect of the event not only connects fans with cars and drivers, it connects the drivers to the fans and introduces them to fans that may not know or appreciate as much of the history.

Of course, we all acknowledge that many drivers are there in their corporate role to represent the marque, but it is still charming to hear Hans Stuck explain how we came to be paired with Derek Bell. After commenting on the lack of ego necessary to make such a successful and long-lasting team, he explained the real reason was the natural combination of the first two letters of Derek’s last name with the first two of Stuck’s last name to form the “Best” driving pair.

Perhaps one of the most impressive things about the Rennsport Reunion was that the only car in the entire paddock behind ropes was the RSR made with legos. With all of the unobtanium and cars carrying values that make them well out of reach for most, they were all accessible for a closer look.

Were there significant cars in the US that might have augmented the proceedings? Absolutely. Was the event largely a Porsche marketing exercise? Yes. Would it have been great to see certain cars on track rather than on static display? You bet.

With the passage of time, however, it is easier to look back on the event and be grateful for the moments. Hearing war stories from Bruce Leven about the early days of the 962 program and their efforts to optimize engine longevity in the face of expensive rebuilds. The opportunity to talk to Klaus Bischoff, former mechanic and now caretaker of the museum cars that are brought out to special events, who clearly is proud of his stable of cars and his team. The chance to meet Jackie Ickx and unexpectedly have him say thank you for watching his racing. The brain stretching moment standing in the paddock with a multitude of choices and struggling to decide what flavor to taste next.

The same goes for the racing machinery itself. When the twin turbos of the blue and yellow 917/30 spool up as the car launches itself down the front straight, it reminds us why we originally pressed up against a fence at a race circuit somewhere and got hooked.