Porsche completed the clean sweep of 2015 Pole positions thanks to a record breaking effort (Average of 1:39.736 across the two timed laps) from Brendon Hartley and Timo Bernhard, the additional point on their season tally meaning that fourth place tomorrow will be enough to secure the World Driver’s Championship for the #17 crew. 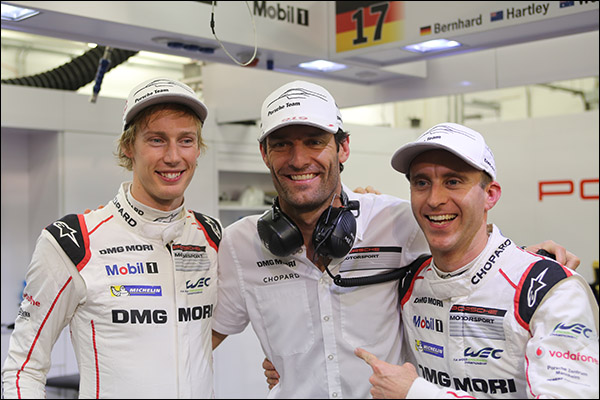 The #18 Porsche provided a rear gunner effort to complete the front row with the #7 Audi’s effort falling over a second and a half short, an effort not helped by a messy lap from Andre Lotterer.

The #13 Rebellion pair of Alex Imperatori and Dominik Kraihamer secured their third LMP1 Privateer pole of the season (1:46.660) ahead of the sister #12 car.

LMP2 saw a little more drama, a clash between the Strakka Gibson and #28 G-Drive Ligier, Messrs Leventis and Gonzales getting mixed up.

Neither car though would eventually feature in the battle for pole position, Sam Bird’s excellent pair of laps in the #26 car backing up the early effort of Julian Canal, the combined average of 1:58.659 though would only manage third on the class grid.

Pole would be fought out between the resurgent efforts of the #36 Signatech Alpine with the increasingly controversial Silver status of Tom Dillmann proving decisive when combined with Paul Loup Chatin. The pair would produce a 2 lap average of 1:58.347.

That could not quite be matched by the best efforts of the KCMG pair, Matt Howson followed by Nick Tandy, the gap at the flag down to 0.053 on average, though Tandy’s fastest lap was under review post session for track limits.

STOP PRESS – Nick Tandy’s fastest lap was disallowed – track limits – the #47 drops back a position, now sandwiched between the #26 and #28!