What a way to finish a quite astonishing season of endurance racing as the FIA WEC delivered another topsy turvy six hours in every class with title battles turned on their head, and turned back again! Before we forget this little snippet 32 cars started, and all 32 came home, an appropriate way to mark a season of high quality from the whole grid.

In LMP1 it all looked pretty straight forward, for about 25 minutes!

Timo Bernhard blasted away from Pole with Romain Dumas playing rear gunner to what proved to be a rampant attack from the Audis behind. 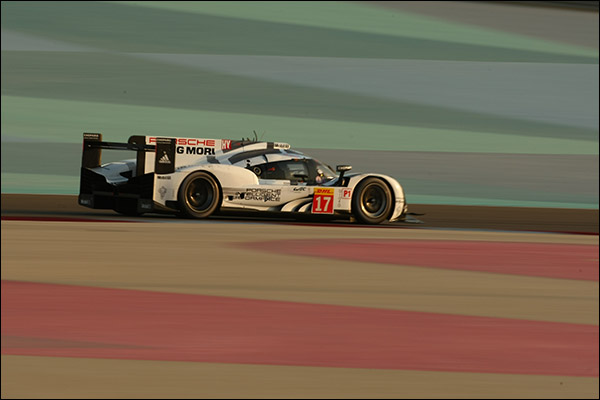 It looked for a while at least as if the #17 would sprint off into the distance with the rest in its wake until the first of what would prove to be a number of major dramas as Bernhard slowed dramatically, the car crawling back to the pit lane with a broken throttle linkage.

Eight minutes, and four laps, were lost and by the time the #17 rejoined the race looked very different, it was one Porsche fending off the Audis and when the first Full Course Yellow was called, finally, it fell to Audi’s advantage and by the top of the first hour it was an Audi 1,2 and with the #17 Porsche recovering up the field, at this point the potential points would see the Drivers title going to the second placed #7 Audi crew. The #17 would have to push hard, 4th place was required, and that would mean that if the rest of the field ran cleanly that the 919 would have to deal with the factory cars. 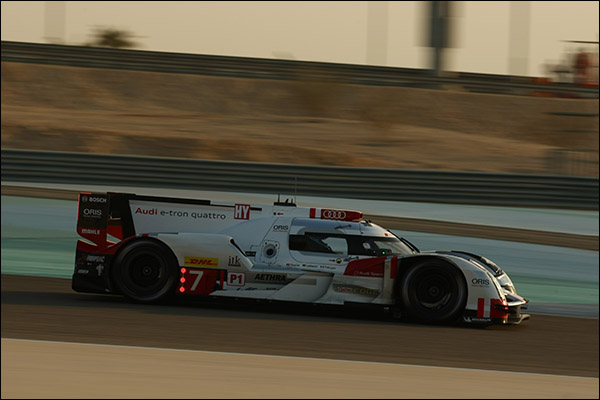 Lucas di Grassi popped in a storming double stint with Marcel Fassler ceding the #7 to Andre Lotterer, the Swiss driver finding the balance of the car difficult. After the first stint it would be Lotterer and Treluyer to bring the car home.

The pendulum had swung one way, with the Audis seeming to be able to hold the #18 off on pace, that was until the next major issue struck, and this time it was an Audi in trouble, the #8 car suffering a major brake disc failure that saw the car struggle back to the pits requiring a full front left corner change – 15 minutes were lost and Oliver Jarvis was despatched to attack the deficit. 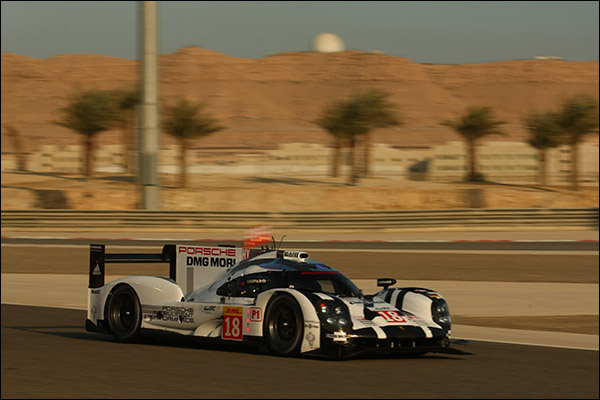 By halfway the maths had changed again, and this time it looked rather better for Porsche. The #7 Audi still led with the #18 Porsche right on the tail of the undelayed R18.

Alap down, but in third and fourth, were the Toyotas, lapping close together, entirely reliably and at a pace closer than we’ve seen for much of the season to their factory rivals. Next up was the #17, and, with the potential of Porsche employing team orders with a title at stake, the #17 crew looked as if they had powered back to some semblance of safety, helped in no small part by charges from Timo Bernhard and Brendon Hartley as they charged back right through the field. It wouldn’t last!

The fourth and fifth hours would see three important changes. Two would affect the Audis, the #7 car suffering a faulty wheel nut that required a brief additional stop to change a single wheel, and the #8 receiving a three minute stop and hold after the frantic action during the earlier repair saw a hugely uncharacteristic error with the wrong front tyres refitted to the car, this taking the tam over their 34 tyre maximum allocation during qualification and the race.

The third struck the #17 Porsche, and it was a big problem, team radio revealing that there had been a failure of the energy harvesting system in the front axle. Time was of the essence and the team opted quickly to get the car back out a quickly as possible to run to the finish with only the exhaust recovery hybrid system operating. The car was ailing fast and from there on in it would be Mark Webber’s unenviable task to nurse the car home.

It looked a harrowing ride, the car refired from pitstops on engine power only, and twice at least seeing the engine die completely, Webber managing to get it refired after substantial delays. There were safety implications here, a usually stupendously fast car was hobbled, and had slowed dramatically on track with faster traffic unaware of the issues, a mechanical warning flag was a major risk, but Webber did enough to bring it home.

The penalty for the #8 doomed the second Audi to sixth, Webber’s efforts, and not least some marvellous ‘bush’ engineering from the Porsche Team saw the #17 stagger home in fifth, the battery pack totally spent, enough though for the World Drivers’ Championship to go the way of the increasingly impressive Webber/ Hartley/ Bernhard combo. More of that in a while.

Ahead of the ‘walking wounded’ from Audi and Porsche Toyota had a faultless run, aside from a brush between the #1 TS040 of Kaz Nakajima and the #36 Signatech Alpine that required a front bodywork change for the Toyota and dropped the car behind the #2. 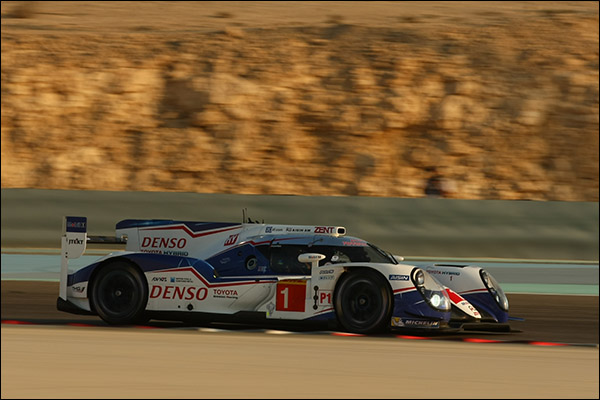 From there on in it was almost a formation run, the Toyotas running just a handful of seconds apart, and often less than a second.

At the flag there was confirmation finally that their 2014 World Championship were going to new homes with Porsche, but a fighting third and fourth was a season highlight from a quality team that didn’t quit.

There was more though as the #2 car was the one that made the podium and, alongside Stephane Sarrazin and Mike Conway (who, for this writer, had his best ever run in an LMP1 thus far) was Alex Wurz, the hugely popular Austrian scoring a podium finish in his last ever race, matching the achievement of Tom Kristensen at Audi last year. 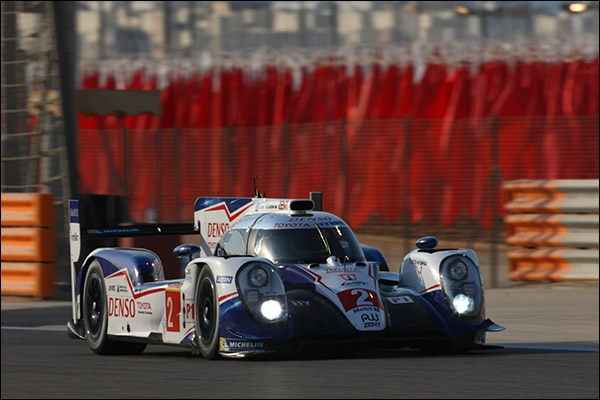 That left the top two, and after a fine battle, their best race long run of the second half of the season, the #7 Audi finally had to give best to the #18 Porsche. Messrs Jani (whose searing pace completed the race with a new race lap record (1:41.893) in the books and a minute and 25 seconds in hand, Dumas and Lieb finally catching the break that had deserted them for much of the season, after no fewer than four second placed finishes the #18 scored theor first win of the season.

They got the top step of the podium, but unusually the new World Champions were given a brief moment there too and whilst no doubt much of the news coverage tomorrow will focus on the Man that could have/ should have won a World Championship in F1 but didn’t he was the first to ensure that anyone listening didn’t forget that it had been very much a team game: 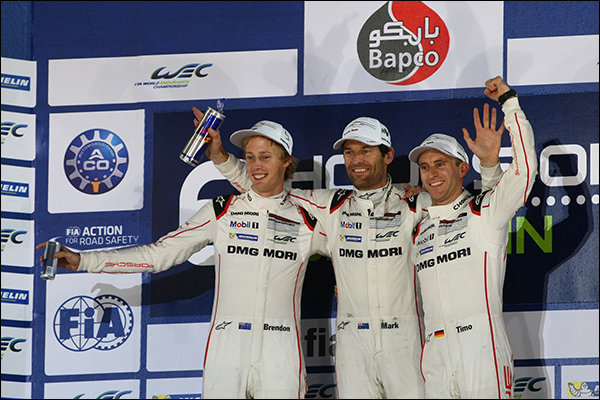 “From top to bottom this has been a team effort. From the guys at the factory, the team management and, more than ever tonight the boys in the pit crew. Without their genius we wouldn’t be here and, I don’t know who came up with the solution that got us back out on track but there’s a big beer in it for him tonight. As for Brendon and Timo, Brendon is going to be a big star for a long time. He’s super quick, he looks after the car and he doesn’t make mistakes. For Timo I can just say thanks. You couldn’t want for a better team-mate He’s generous with his time and advice, he’s Porsche through and through, and he’s as quick as anyone else out there too. That’s what a World Champion should be!”