After wet conditions in practice sessions and limited track time, the field queued up for qualifying sessions with standing water on parts of the track and sprinkles in the air. Forecasts suggested that the rains would move through this evening leaving dry running for the race, so teams sought to get their laps in without taking undue risk.

Conditions deteriorated throughout the qualifying session, so each successive class had a wetter surface and more standing water to contend with. Many teams chose not to run or only run a few laps to set a safe time.

Twenty GTD class cars took to the track first for their 15 minute session.

Times up and down the order shifted by the lap before Norbert Siedler in the #73 Park Place Porsche set several fast laps and ending up spending most of the session at the top with times in the 2:07 range. In the last minute of the session, Marc Basseng and Leh Keen threatened before Siedler set a faster lap by another second. 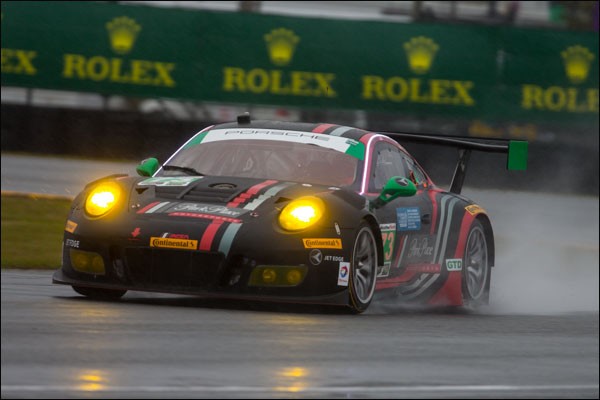 At the flag, Siedler stamped his claim to pole by further lowering his time, resulting in a half a second gap over Marc Basseng in the #28 Konrad Lamborghini and a three quarter second gap to Leh Keen in the #22 WeatherTech/Alex Job Porsche. Damien Faulkner took fourth in the #93 Viper and Sven Muller completed the top five in the #30 Frikadelli Porsche. The Porsches apparently liked the wet conditions. The hot lap from Basseng is also impressive given the modest running time the team had in practice.

After the session, Siedler commented “[i]t’s always great to be back in America. My last time here was 2 years with Park Place. The car was really good in the rain. Porsche is always great in the rain. Pole result is great for us, even for a 24 hour race. It was the first time for me to be in the car in the last car, and this is the first time for me in this new car. A bit more downforce, some more torque in the engine. It should be very competitive. I have great team mates so I hope to be running well tomorrow as well. It’s not so easy to get temperature in the tires in these conditions, but I got it going in the end.”

Several cars set safe laps judging by the gaps, so qualifying was not representative of the likely margins among the class when the green flag drops on Saturday.

The #9 Stevenson Audi visited pit lane, but did not set a time. The #9 is a car that ran under Phoenix Racing colors at the 2015 Nurburgring 24, so it has some endurance mileage in race conditions before the Daytona 24. The #16 Change Racing Lamborghini also did not set a time.

Unfortunately, in light of the crash damage, it is difficult to separate damage before and after the crash to isolate a cause but the team suspected that a braking failure might be the culprit.

GTLM was next up for its own 15 minute session with rain falling more steadily throwing off large amounts of spray from the giant diffusers beneath the rear of the cars.

After several laps in wet conditions, two Ferraris found themselves in trouble at different parts of the track. The #72 SMP Ferrari 488 spun and hit against the tire barriers beyond turn 1, making contact along the left rear corner and pulling off the rear wing. Toni Vilander spun the Risi Ferrari at the exit of the bus stop, but continued after kicking up some mud. The SMP Ferrari was unable to resume on its own and the need for a recovery flatbed brought out a red flag to pause proceedings. Driver Gimmi Brunni was evaluated and released from the care centre.

The recovery took some time which left little time to run more fast laps. A minimum guaranteed required green time of 10 minutes kicked in, so the field got another chance to run some laps.
The Porsche trend from GTD continued with Nick Tandy in the #911 taking his Porsche RSR to the top of the table on the last of his four laps with a time of 2:01.408, a second in front of teammate Fred Makowiecki in the #912. 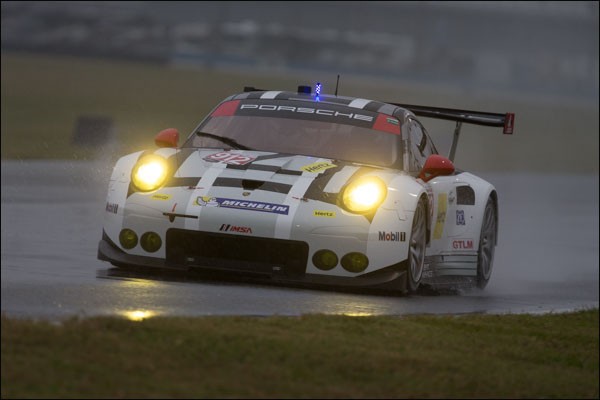 John Edwards in the anniversary #100 BMW was just behind in third. Jan Magnussen in the #3 Corvette had been at the top before the red flag, but finished the session 9th in class. The pair of Ford GT entries sat together at the bottom of the GTLM. Joey Hand spun at the exit of the chicane at the very end as well. Seven seconds spanned the GTLM field which is certainly not representative of what to expect in dry running.

“In the end it was a really interesting qualifying session,” commented Tandy. “When we went out after the red there was only time for one flying lap. I understood that early so I made some space. It’s always good to follow someone because they take some water off in front of you… The risk of going off and getting higher on the grid was really high. We got the cars one-two on the pole and that’s what we wanted. So this overall start first goes well.” He credited mechanical grip for the lap time noting that the softer tires, softer springs, traction control and continued development and testing makes a big difference.

Prototype challenge set out for its session with some very cautious laps to get started. The PC cars had downforce, but needed grip and speed to make use of it. Cars wriggled and some found their way to the grass.

BAR1 Motorsports claimed first and third in the hands of Johnny Mowlem for the #20 and Ryan Eversley in the #26. Mowlem set his fast time on his fifth lap of 2:05.708. Stephen Simpson in the #85 JDC-Miller Motorsports car 1.7 seconds adrift. Mowlem later lamented the conditions saying that “the conditions today were absolutely dreadful. I was actually getting sideways on the banking, so it shows how hard it is with the LMPC cars. I actually qualified quickest ahead of the prototypes, but I don’t think they are going to let me start in front.”

Looking forward to the race, he continued noting that “we were here at the Roar, and I wasn’t particularly happy with the car. I wasn’t able to work on the race setup like I wanted. We’ll be double and triple stinting into the night, and in the dry we might not be looking after the rear tires as well enough.”

The risk factor clearly influenced decision making for the session. Several cars set very safe times rather than go for qualifying times. Cars #52 of PR1 and #54 of CORE Autosport opted not to take part in light of the risk of damage, leaving only six cars to set times.

Intensifying rain greeted the prototypes for the last of the qualifying sessions. Gloomy skies brought the track lighting and headlights of the cars to attention. Conditions deteriorated throughout the session. All cars participated except the Delta Wing.

Oz Negri in the Mike Shank #60 Ligier took the top spot on his third lap halfway through the session with the #37 BR01 Nissan in the hands of Mikhail Aleshin just behind. Ricky Taylor and Joao Barbosa in the Corvettes went long into turn one at one point in their Corvettes, illustrating the perilous conditions when pulling off the banking. Likewise, Pipo Derani went long after setting a fast lap as well. 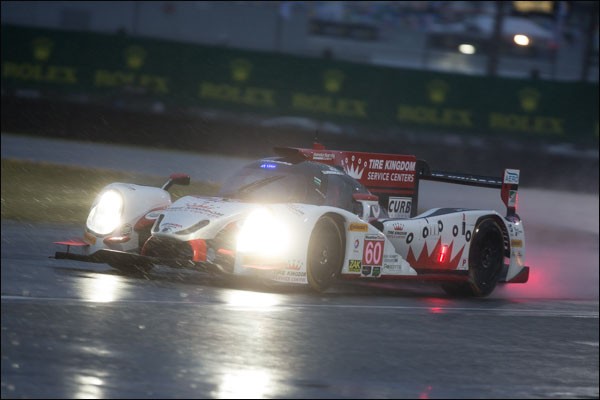 The top times rotated between Negri, Derani and Aleshin. At the other end of the field, the two Mazdas appeared to do several relatively safe laps rather than put their cars in peril.

Mikhail Aleshin took his car to the pit lane as the rain got worse with fastest lap and others unable to find more speed. His time of 2:05.793 was half a second ahead of Derani in the ESM Ligier and just under two seconds ahead of Negri in the Shank Ligier.

The pole performance for the BR01 is quite a debut for the car’s first competitive outing in the United States. Aleshin was clearly proud of the effort for the new car amidst difficult conditions. 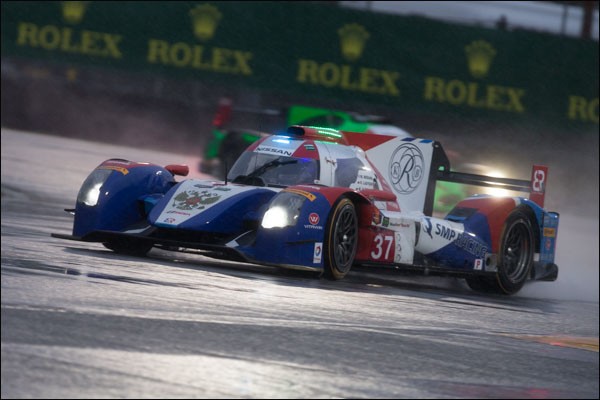 “I think everybody can see my face and smile about this pole… It’s a great result for all of us because we have been working on the car. It’s great for the whole family. It’s a funny situation because we are driving different tires than the GTs and the prototypes are all slower because of that… At the end of the session, the track conditions became worse and it started to rain more. I almost hit the wall a couple of times on my fastest lap. Surprising for myself, I managed to stay on track and first in class. At the end of the session, the conditions were really difficult. Probably the most difficult I’ve driven in my career.”

The story of the qualifying sessions clearly was the weather and the deteriorating conditions. All of the drivers remarked after qualifying about the difficult conditions.

The GTLM cars posted the top times of the entire field and the pole-sitting prototype challenge car was faster than any of the prototype entries. Throw in the fact that a number of cars opted not to run or run only minimally and the ability of the GTLM runners to make use of Michelin tyre development and the result is a starting grid with jumbled times. Drivers who set the times will start the race.

90 minutes of Thursday evening practice will be followed one 60 minute practice session on Friday which is likely to be the only dry session the teams will have prior to the race.