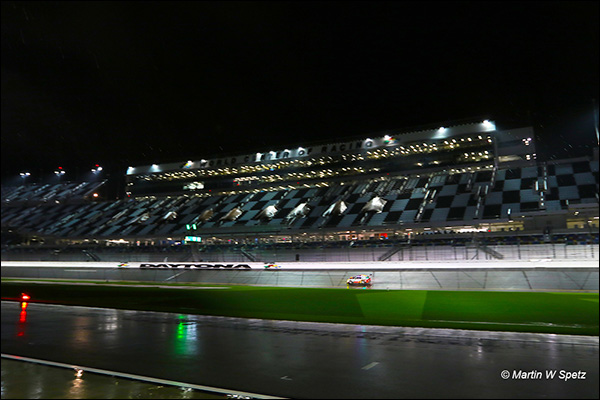 Some teams that didn’t need to go out, opted to skip the session altogether including the Porsche GTLM team. The prospect of a dry race meant there was little to gain and a lot to risk from running through steady rain.

In some cases, teams needed to get seat time for less experienced drivers. IMSA requires night laps to get familiarity and show competence for the least experienced drivers which is a bit ironic given the bad conditions when teams would ordinarily want their professionals to be behind the wheel. 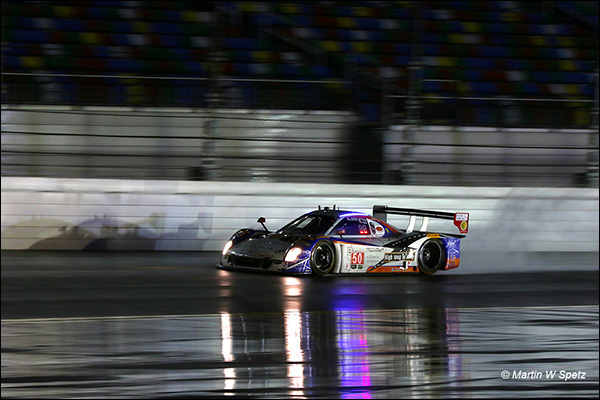 The track was very wet Session barely got underway before a red flag halted proceedings.

The #11 O’Gara Lamborghini found its way to the barrier and was quickly recovered with only a five minute delay. The car returned to turn a handful of laps later, so presumably the damage was light or absent.

Graham Rahal only set two timed laps in the #100 BMW before the team closed shop for the session. He commented on the conditions, saying to Jim Roller on IMSA Radio that “it’s ugly for sure. There is a ton of standing water. Probably more than any other track I’ve been to. Our only objective was to get out and check some lighting and bed in a set of race brakes, a second set of race brakes.”

After 30 minutes into the session, only 30 cars set timed laps but the lap count and the time gaps clearly illustrated that fast times were not the objective. Many cars only did a handful of laps and were 20, 30 and 40 seconds and more off of the fast time of the session. For what it’s worth, the fast time for the session happened to be set by Jan Magnussen in his Corvette who only did 5 laps. Only a dozen cars or so at a time circulated under the lights and through the raindrops. The spectacle of spray under the lights may have been the reward for spectators brave enough to stick it out through the ugly weather. 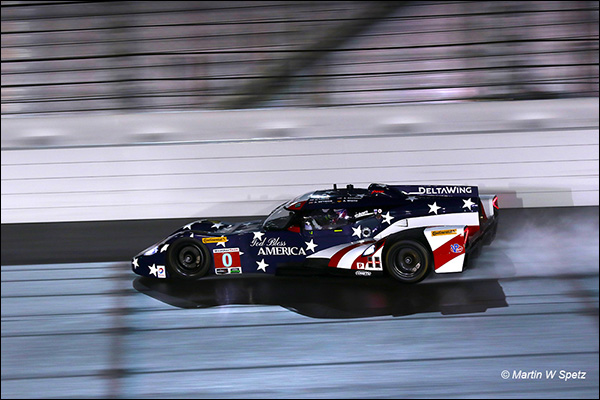 There was some news on the tire front from Continental before the session. After the twin tire failures of the Aston Martin and BMW GTD entries in earlier practice, Continental required GTD teams to boost the minimum tire pressures to 26psi for wet tires at Daytona. Continental noted that there had been no previous issues with GTD wet tires and that there were no issues reported at the Roar from dry running. Both the #007 Aston Martin and the #97 Turner BMW made repairs from their incidents and turned laps in the evening practice. 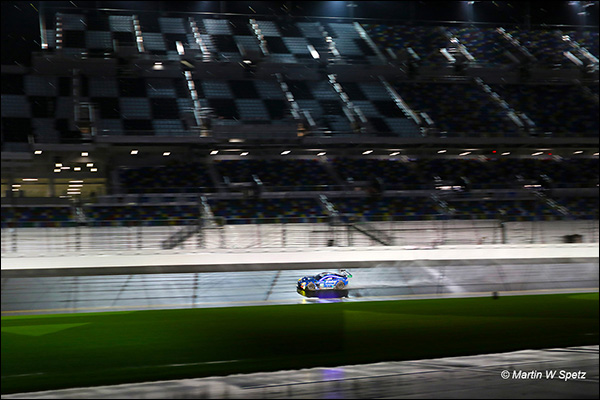 The #72 SMP Ferrari 488 that previously found the tire barriers was repairs (or repaired enough) to get out for a few laps in the evening practice.

After taking care of night laps for drivers without Daytona experience, the Frikadelli Porsche team used the time to practice pit stops and make adjustments based on different rule requirements. Crews needed briefing and re-training to make sure that a rule infraction doesn’t become the difference during the 24 Hours. Give the Germans credit for the methodical preparation. 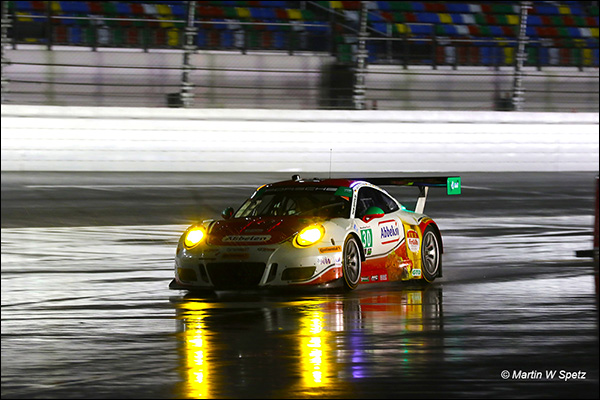 The most laps by far were turned by the #44 Magnus Audi and the #9 Stevenson Audi. The Stevenson car didn’t get solid track time during practice and missed qualifying due to an undisclosed problem, so they needed track time. 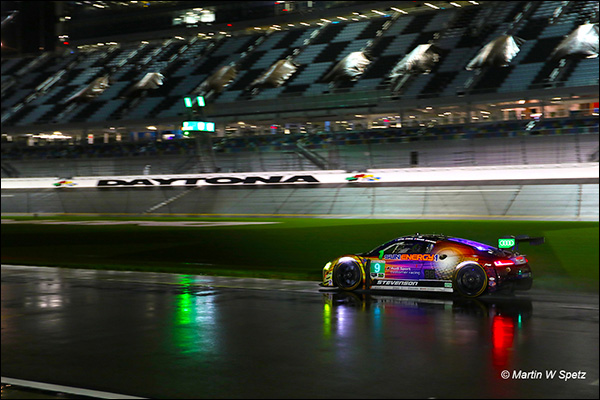 With all said and done, 34 cars set time. At the end of the session, only a few cars were still circulating. As noted above, Magnussen set the top time early in the session overall and in GTLM. Augusto Farfus in the BMW and Oliver Gavin in the second Corvette rounded out the top three.

The #44 Magnus Audi topped GTD with John Potter, Marco Seefried and Rene Rast at the wheel ahead of Shane van Gisbergen in the #22 WeatherTech/Alex Job Porsche. The prototypes largely sat out the session. The #50 Highway to Help Daytona Prototype was fastest in class and sixth overall. Stephen Simpson in the #85 JDC-Miller Motorsports car edged John Falb in the #26 BAR1 Motorsports entry for the prototype challenge class. 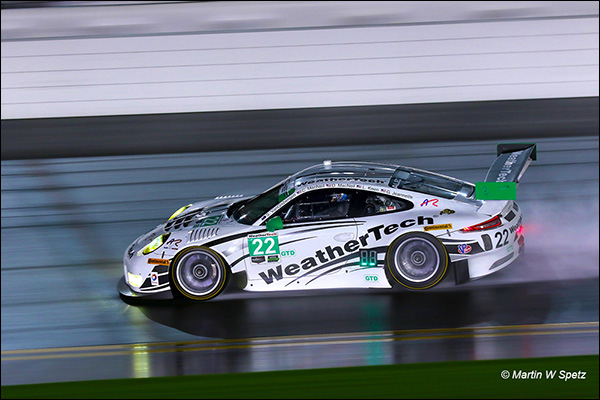 Of course, the rain largely subsided by the end of the session but no cars were running on track at the conclusion to take the checkered flag.

Dry (hopefully) practice kicks off at 10:25am local time on Friday which will be critical. Expect it to have more urgency and importance than a Friday practice session might otherwise be the case as teams work on race set up, tires, fuel mileage, and all out pace on a green track.