The final hour was set up with the prototype class looking like a debate between the Wayne Taylor and ESM prototype teams. Action Express suffered driveshaft failures on both of its cars putting it out of the running for the win. The GTLM and GTD classes remained tight at the top, but contenders became fewer as some encountered problems and penalties. A long green flag run allowed gaps to open up.

The 20 hour mark was signified by the #67 Ford GT stopped on course bringing out the 20th caution. At the same time, the #28 Konrad Lamborghini shed right rear bodywork. The #67 Ford had recently returned to the track after a gearbox change but the team reported low voltage as they worked to diagnose the source of the problem. The car was towed back to the paddock for a closer look. 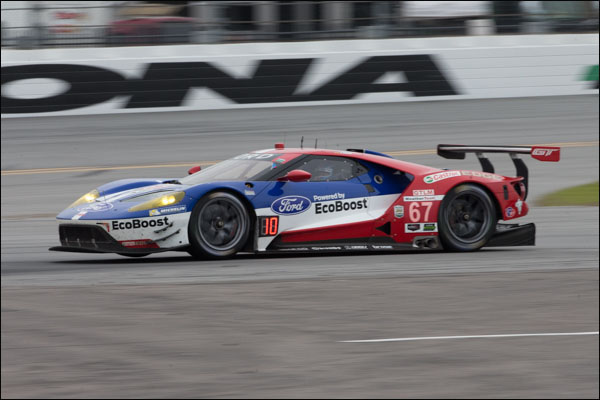 At the time of the yellow, overall leader Max Angelelli in the Wayne Taylor Racing #10 held a slim lead over the charging Johannes van Oberbeek in the #2 ESM Ligier. Marc Goosens in the #90 VisitFlorida car held third and Filipe Albequerque in the #5 Action Express Corvette. Those four cars were the only ones on the lead lap with four hours to go. The Ganassi duo of the #01 and #02 ran in fifth and sixth respectively, but laps down. 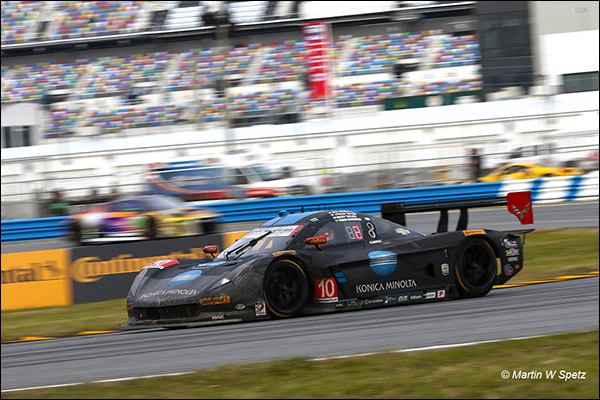 GTLM had been reduced to five cars on the lead lap in class after the Porsche #911 spent time in the garage for drive shaft repairs. Marcel Fassler in the #4 and Mike Rockenfeller in the #3 Corvette led the class with consistent and quick laps. As fast as the GTLM class was, there was no threat for an overall podium without help of calamity in the prototype ranks due to a six lap deficit from the lead GTLM to the next prototype car and twelve laps to the overall leader. 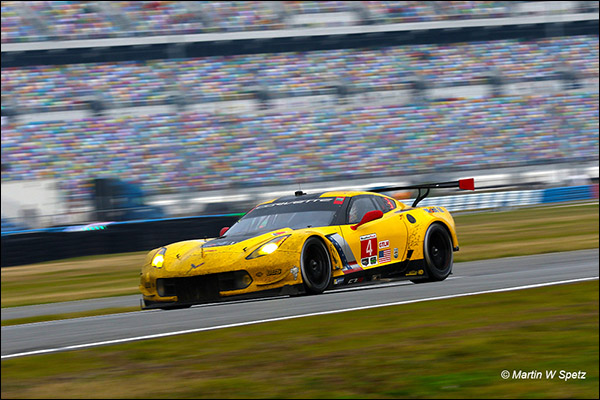 The prototype challenge field became the #85 JDC-Miller Motorsports entry’s race to lose with a six lap lead over its closest rival in class, the #52 of PR1/Mathiasen Motorsports. The post-race data review will tell the story, but Stephen Simpson in the #85 appeared to have done a substantial amount of the driving duties.

GTD continued its close battles with eight cars on the lead lap. The two Alex Job entries, #23 Team Seattle Porsche and the #22 WeatherTech Porsche shared the top of the order with the #97 Turner BMW and the #44 Magnus Audi. Unfortunately, the #23 Porsche incurred a lengthy stop and hold pit penalty for an improper wave-by which put them laps down on the GTD class leader. 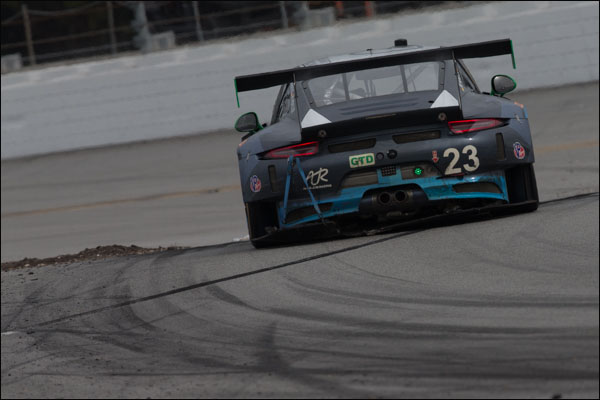 The pole-sitting #73 Park Place Porsche had run strongly earlier but incurred gearbox issues. Patrick Lindsey was at the wheel and had to navigate a congested infield in an attempt to slowly get the car back to the garage and out of contention. The #45 Krohn/Flying Lizard older-specification Audi formally retired around the same time with gearbox issues.

Pit penalties also cost the GTLM Corvette #4 and BMW #25. In such a close battle, the delay resulted in lost track position but both stayed on the lead lap in class and looked forward to a yellow to bunch the field. 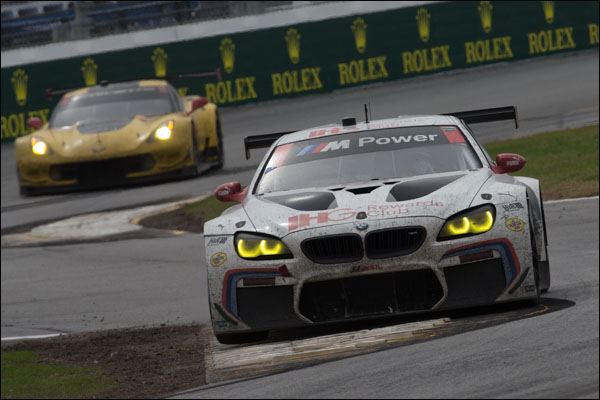 The curse of the lead bit Filipe Albequerque in the #5 Action Express Corvette prototype as he turned a sharp left into the garage with three and a half hours to go. Action Express operated from the closest pit garage to pit lane, so he didn’t have far to go but mechanics quickly removed the rear deck and dove in and under the car. The team car #31 suffered a driveshaft failure earlier in the morning and another driveshaft issue bit the #5 at the left rear. The similar problem cost Action Express any chance of an overall win or even a podium. The #5 malady also cost Scott Pruett his chance at another overall victory, but the team quickly got the car back in the hunt after 10 minutes in the garage in search of season points. 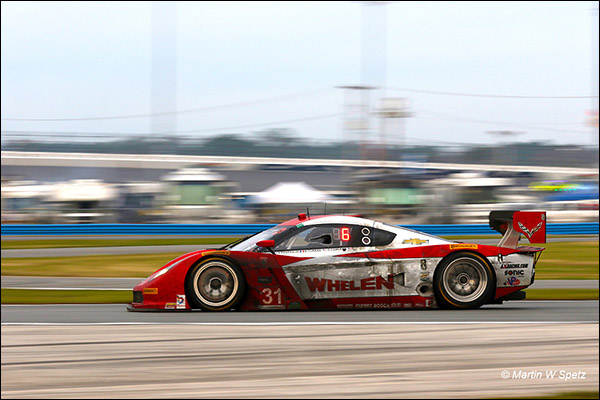 As the 21st hour drew near, the GTD class saw some new names bubble to the top. While Leh Keen in the #22 Porsche continued at the top, Aston Martin ace Pedro Lamy in the #98 in second with Pat Long in the #540 Black Swan Racing Porsche close behind with in third. The diversity of the GTD field was evident as seven different models circulated on the lead lap.

Discussion became more frequent on strategy as teams were thinking about making the run to the flag in 2 or 3 pit stops (depending on yellow periods of course). Teams made moves to get drivers set up for the end as well.

The overall lead focused on the #2 ESM and the #10 Wayne Taylor car. Max Angelelli turned some very fast laps to keep the #10 Wayne Taylor Corvette and turned the controls over to Ricky Taylor. Johannes van Overbeek also pitted but made no driver change and set off but a pit lane speeding penalty deprived him and spectators of the chase. With the #90 VisitFlorida car falling a little further back after a slow pit stop, could Team Taylor start to look towards redemption from the 2015 near-miss? 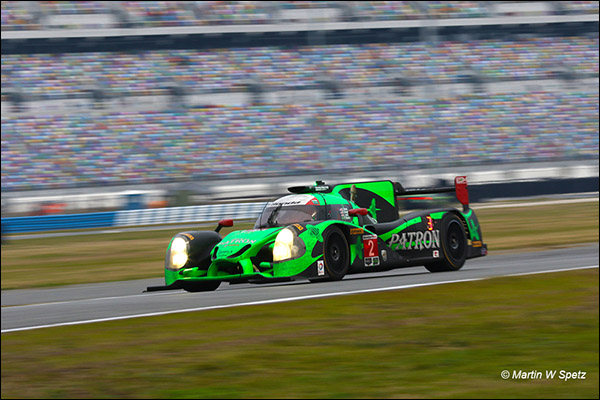 The gaps from some of the penalties become irrelevant as a full course yellow was brought out by Kyle Larson in the #02 Ganassi prototype as a braking problem sent him straight into the tire barrier at the west horseshoe at speed. Already seven laps down from prior front brake problems, the crash inflicted major front-end damage and required a flatbed to recover. Larson walked away from the car under his own power and later was evaluated and released from the medical center. The #02 was repaired and returned further down the order.

Those looking for recovery drive stories should look to the #8 Starworks prototype challenge car. This is the car that has its rear end re-arranged by the Delta Wing in the early hours and went down almost 40 laps. After repairs and some inspired by drivers Renger van der Zande and Alex Popow made up many laps on the (admittedly troubled) PC field to test the top 30 overall. Kudos to the team for showing the endurance racing spirit of pushing hard despite adversity to make up as much ground as possible.

Marc Goosens in the #90 VisitFlorida car showed major speed for his Corvette Daytona Protoype in the closing hours. Running in third, he set fastest lap for the car to that point on lap 658 with just over 2 hours to go. Further up the road, Ricky Taylor had separated himself from Johannes van Overbeek by several seconds which will help ensure the Adjustment of Performance debate will continue. Van Overbeek pitted and gave way to Pipo Derani to make the run to the flag. Regardless of the end result, Derani’s performance during the race will undoubtedly raise his profile significantly in international sports car racing circles. 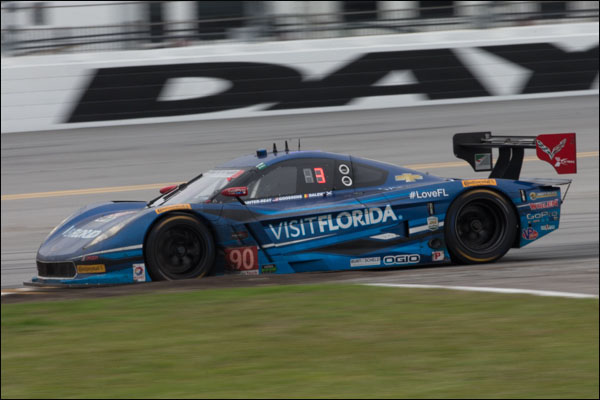 The performance was also a vote of confidence in the strength of the Ligier prototype given the clout the car received from the other Ligier heading into the bus stop much earlier in the race.

As the last hour approached, the fight for the checkers gained focus. Three prototypes were positioned for the win. Goosens, Ricky Taylor, and Derani traded fast laps with all reasonably close on pit stop timing. Taylor and Derani ran close together before Derani passed and stretched away by a few seconds. Goosens gave the #90 VisitFlorida car over to Ryan Hunter-Reay for the finish.

GTLM remained close with Antonio Garcia in the #3 Corvette at the point for the finish and the #68 Ferrari and #912 Porsche trailing. Likewise, GTD seemed to start to look more promising for the #44 Magnus Audi (full credit to a strong driver line-up including Audi specialist Rene Rast), the #22 WeatherTech/Alex Job Porsche with quick New Zealander Shane van Gisbergen, and the #540 Black Swan Porsche featuring Nicky Catsburg setting fastest laps of the group in the run to the finish. 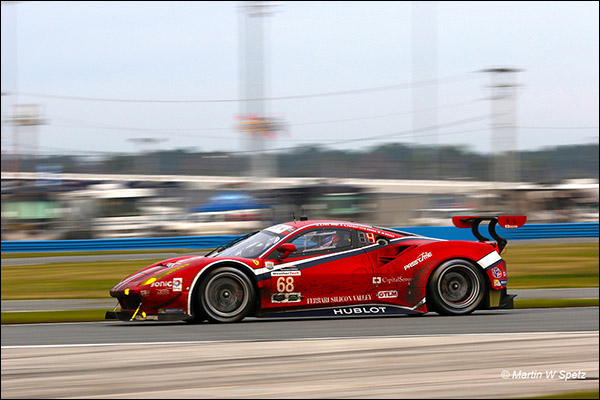 Van Gisbergen was pushing hard enough to have a moment in the infield kink and slid at speed through the grass. He made a costly pit stop where the crew focused on a loose rear wing that either caused the off or resulted from the off and then returned the Porsche to the fight and then promptly repeated the off with the rear wing visibly out of alignment. The sequence took a very strong run for the first 22 hours and change and put it out of contention for the podium.

The GTLM and GTD classes were somewhat separated on the track, so the question would be whether a yellow would bunch up the classes for a drag race to the flag.

Both the #2 ESM and #10 Taylor cars made a penultimate pit stop with about 85 minutes remaining. Brazilian Derani stayed in the ESM Ligier and Jordan Taylor took over for his brother in the Corvette prototype. Neither Taylor brother felt completely healthy, so strong runs from Max Angelelli and late addition Rubens Barichello helped the cause.

After the pit stop sequence, the gap settled in at a dozen seconds or so. Hunter-Reay in the #90 pitted later than the others and rejoined 30 plus seconds behind the second place Taylor car and would likely need assistance of a yellow or calamity to claw back that much time. Of course, this is Daytona where such things are not unknown.

With that, the race entered its final hour.