An eventful two hours saw two race favorites encountered trouble. The Ganassi 02 had front brake failure and the 60 Michael Shank car lost an engine. The GTLM class continued to be close with the BMW duo making up ground to make it mostly a Corvette, BMW and Porsche battle. The Lamborghinis of Paul Miller and Change Racing run at the head of GTD. Meanwhile, the prototype challenge class dissolved with many runners retiring or hurting badly.

Several yellow flags before and just after 8 hours of racing allowed several cars to make up laps which put more cars on the lead lap in several classes. Seven prototype cars circulated on the lead lap with the sole remaining Mazda one lap down. Negri led overall from Ricky Taylor and Tony Kanaan, Marc Goosens and Filipe Albuquerque to complete the top five. Both Taylor and Kanaan got around Negri on the restart.

GTLM continued its right battle with eight cars on the lead lap in class. The Corvettes, Porsches and BMWs rotated the lead amongst themselves. The yellows helped the #25 BMW to make up its laps lost previously due to a right rear tire issue. At times, the GTLM runners prioritized survival by running consistent laps and avoiding undue risk. However, restarts were incredibly frantic with so many cars in close quarters. Some restarts settled out with space after a lap or two but sporadic fights broke out which were thrilling. The Porsche pair visibly ran in tandem more often than not, presumably the result of a very deliberate strategy. 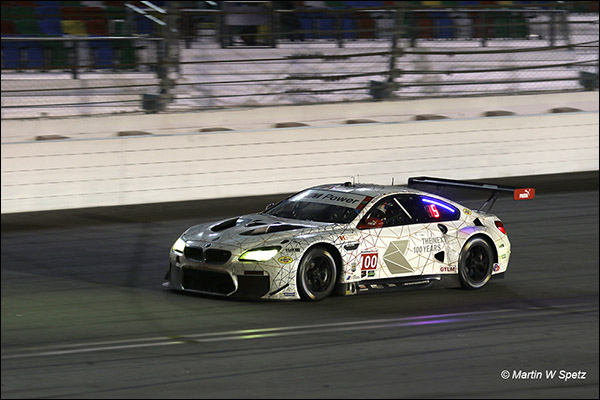 At one point, the BMW duo made its way to the head of the class at midnight in the hands of Augusto Farfus in the #25 and John Edwards in the #100. The two ran together for several laps with the Corvettes and Porsches at their heels before the order shifted again. The Ferraris never appeared to have the consistent pace to play at the front of the class.
Ford confirmed that the same issue sidelined both GT entries but that the issue had not been experienced previously.

The Lamborghini train continued with the #48 Paul Miller Lamborghini and the #16 Change Racing Lamborghini leading the way and the class of the GTD field. The strong run for the #16 rewarded the crew for a very late night repair job after the practice crash tore the front and rear left corners off the car. The drivers got little to no practice time but put in consistent race laps.
The Porsche GT3 teams made progress up the order with the #76 Park Place Porsche best placed in third with only slim margins down the order. Eleven cars were on the lead lap with several other cars only a lap down. The #33 Viper had an off resulting in right side damage which earned it a tow from the horseshoe back to its garage. It was repaired and resumed, but its neighbor in the garage, the #96 Turner GTD BMW required repair work to remedy significant nose damage after blowing out a tire.

Drama struck for the #02 Ganassi prototype at the 8:25 mark when he slowed coming out of the infield and on to the banking. Tony Kanaan concluded his 3+ hours of drive time by taking the car back to pit lane and directly to the garage. The crew descended on the front of the car to replace the brakes. Kanaan reported absolutely no brakes when he pressed on the pedal. In under 20 minutes, the #02 returned to the track with Kyle Larson at the wheel and 10 laps off the lead lap.

The prototype challenge class suffered substantially in this period. The #54 CORE autosport car retired earlier with an engine failure, the #88 Starworks car retired with damage after hitting the wall in the bus stop, and the #8 Starworks car lost significant laps to repair the damage after having its rear end rearranged courtesy of the Delta Wing prototype. The #26 BAR1 entry lost its starter earlier in the race which hurt the car’s ability to restart after pit stops and then brought out a full course caution after parking on the inside of the west horseshoe. The #38 Performance Tech Motorsports car suffered with transmission issues. The class suffered another setback when Kenton Koch in the #85 JDC-Miller Motorsports parked against the wall coming out of the bus stop just shy of the 9 hour mark to bring out another full course yellow. It had no visible damage and the car resumed after getting a tow back to the pits. The car led earlier with Stephen Simpson at the helm who put in a long and fast first stint. 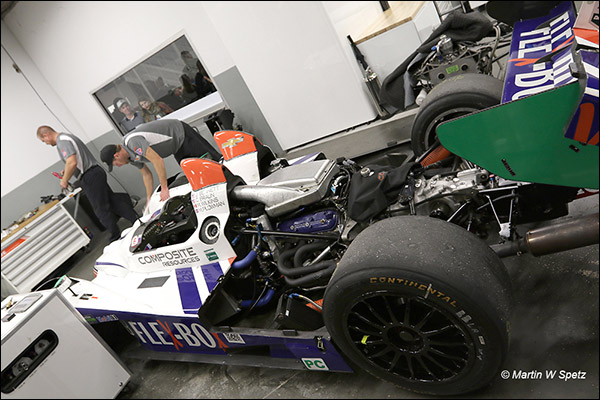 One of the few without issues, Tom Kimber-Smith led the way in class in the #52 PR1/Mathiasen car and building a lead measured in laps rather than seconds before turning over to Robert Alton. The #20 of BAR1 Motorsport was next in the prototype challenge order.

Bad news struck leader Oz Negri after nine and a half hours as he pulled off at the east horseshoe to drivers left. The car left a trail of fluid which told the story of an expired engine. The car was towed back to the garage and retired. 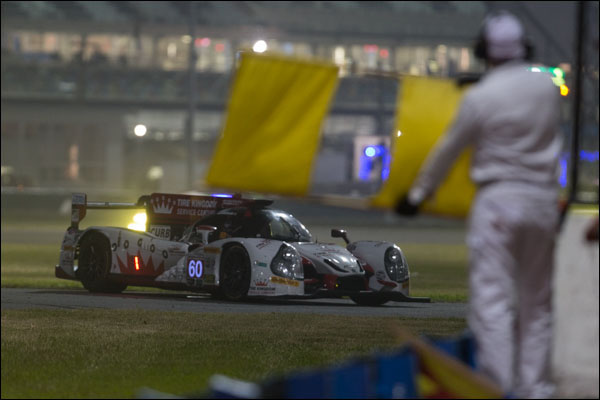 The resulting full course yellow was the eleventh of the event and provided an opportunity for pit stops which left the #2 ESM in the hands of Scott Sharp in the lead. Sharp lead away from the restart with Scott Pruett in the #5 Action Express Daytona prototype. The lead was short lived, however, because Sharp served a stop and hold penalty for running the red light at the end of pit lane (which might explain how he got into the lead). The penalty cost a lap. Meanwhile, the #55 Mazda made up its lap to climb onto the lead lap. 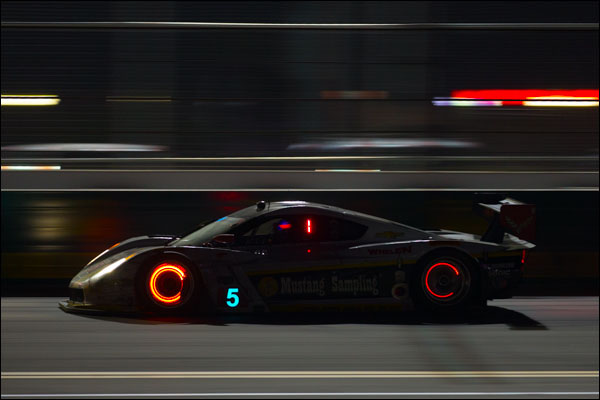 As the race moves closer to halfway, the list of retirements and cars down by laps in the double digits laps is steadily growing. In prototype, GTLM and GTD, however, strong runners remain and are separated by slim margins.