This bulletin just received from IMSA

“Following observed performance during Round 1 of the 2016 Championship, IMSA has levied penalties under Sporting Regulation Attachment 2, Paragraph 2.9 against the following GT Daytona (GTD) teams 11, 16, 21, 28 and 48, as well as to the manufacturer, Lamborghini. 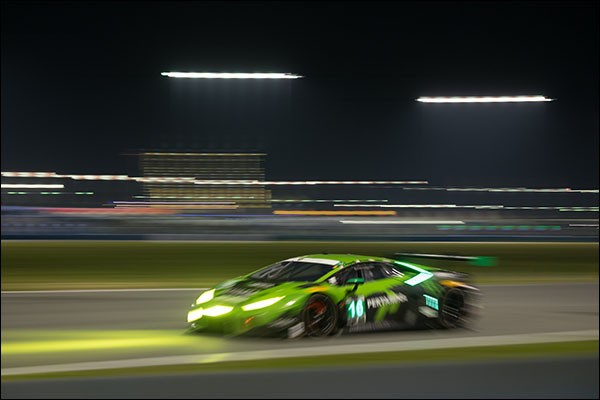 “Each team was assessed a post-race penalty of a stop plus five (5) minutes which was added to each car’s finishing time.

“The manufacturer penalty was assessed as a loss of Championship and North American Endurance Cup points and a $25,000 fine.” 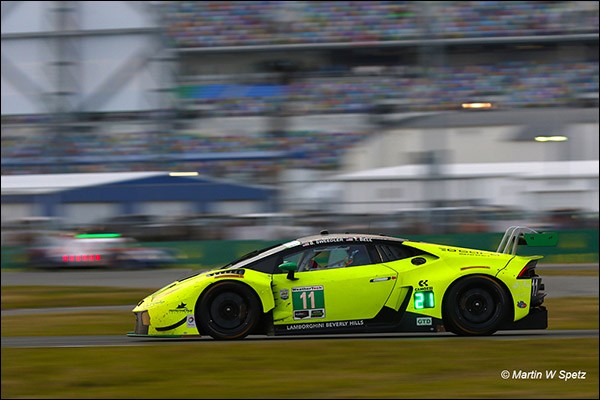 DSC understands that this results from a post-race investigation into the pace of the Lamborghini Huracan GT3s in the GTD class which is understood to have discovered non-approved parts in the air intakes of all of the cars.

IMSA impounded the V10 engines from all five of the Lamborghinis post Daytona and tested them last week.

The net result of the sanctions are that the #28 Konrad Huracan is classified in P10 in GTD rather than its initial P5, The #11 O’Gara car (which has in any case apparently now withdrawn from the Championship) falls a place to P15. The remaining trio of cars were out of contention.

In terms of the scale of additional performance shown by the Lamborghinis, the fastest lap in the class was posted by Townsend Bell – a 1:45.873 in the #11 O’Gara car.

That compares to a fastest lap from the eventual class winner, the Magnus Racing Audi (which features the same Audi-derived V10) at 1.343 slower! That engine incidentally was used by IMSA as a benchmark for the IMSA dyno tests.

Across all five Lamborghinis, 72 of 75 fastest top speeds were produced by Huracán GT3s.

Marshall Pruett on racer.com writes that an email exchange took place between IMSA and the other GTD manufacturers following the fourth practice session at Daytona after manufacturers made individual requests for the series to make pre-race BoP adjustments to the Huracan GT3. IMSA’s response asserted its rules-based decision to monitor the Lamborghinis in the race and make any necessary BoP changes post-event.

Whilst IMSA have not specifically pointed to the specific factor and reason behind the penalties Lamborghini is known to have supplied an air restrictor previously used on the older generation of Audi R8 LMS and outlawed by IMSA as the unit was capable of providing improved power and torque from the series BoP data.

Audi ceased usage of the unit at the start of 2015 but Marshall has spoken to a senior source who suggested the improper air restrictor offered as much as 40 additional horsepower.

IMSA’s ruling cites the rule used to penalize Lamborghini and its teams:

Attachment 2, section 2.9: “Competitors and Manufacturers are expected to provide valid data upon request to assist IMSA in the BoP process. Any Competitor or Manufacturer who deliberately gives false information, attempts to influence the BoP process, or displays a level of performance beyond the expected result may be issued a penalty prior to, during, or after a Race of a minimum Stop plus five (5) minutes. A penalty assessed prior to or during the Race must be served within the final thirty (30) minutes of the Race, regardless of the time when the infraction was discovered and/or the penalty communicated. Penalties assessed after the Race are added to the Car’s finishing time for the Race and may include a lap count penalty.”