Post VW-Gate cutbacks and budgetary constraints have resulted in an LMP1 class that is rather thinner this year; Nissan has gone of course and the three remaining factory teams have two cars apiece this year rather than the trio fielded in 2015 by both Audi and Porsche.

Add into the mix two a pair of measures introduced by the rule makers that were designed to further increase efficiency (with a 7% reduction in allowed fuel) and,  for Le Mans only, a restriction on their level of hybrid boost that can be deployed in one shot. That theoretically tempers ultimate acceleration, but actually means that the cars have boost for longer (the energy storage capacity stays the same).

Another thing to take into account is the performances thus far in 2016 that have seen all three factory teams struggling with apparent reliability issues and there are theories galore that this year has better prospects for the first time in a long time a potential surprise result is on the cards. 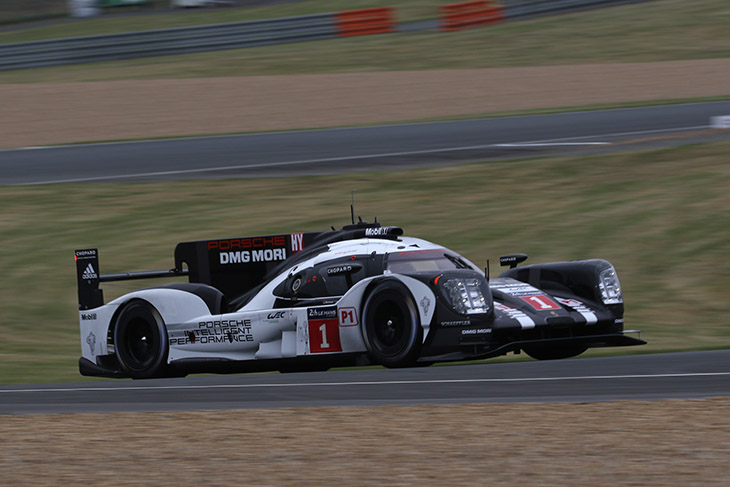 The champions return, but as with the other factory hybrid squads, with just two cars this time around and that means that none of last year’s Le Mans winning drivers are aboard LMP1 machinery in 2016.

The FIA WEC World Champions carry the #1 and there are likely more F1 fans interested in the progress here of Mark Webber than will be remotely interested in anything other than the first corner, and the final result from the disgracefully scheduled European Grand Prix in Baku, Azerbaijan.

Webber will be quick, as will both of his teammates with young Kiwi star Brendon Hartley the likely hammer man of the trio. Timo Bernhard though, is still a match for anyone in this field for raw and sustained pace as well as race smarts.

In the #2 car the bad luck of last season seems to have turned a corner. Despite moves in the off season the same squad returns, and it is another trio of high quality with Neel Jani providing the seemingly compulsory Swiss element in an LMP1 team, and now one of the very fastest men on this grid.

None of last year’s Le Mans winning drivers are aboard LMP1 machinery in 2016.

Romain Dumas and Marc Lieb too are Porsche factory men of some heritage now. Both understand how important this effort and this race are to the brand, and also that their and the team’s performance is under scrutiny. A win would likely silence whispers of a postseason change.

As for the car, the 919 Hybrid took some significant steps forward for the 2016 season, and, as with their LMP1 H brethren, found some unreliability along the way, despite an impressive testing schedule.

The major response to those issues has been a now confirmed switch back to the 2015-spec battery pack, for Le Mans at least, whilst the development team burn the midnight oil to iron out any bugs from the 2016 version.

The prospects are good, very good, the 919 was the class of the field last year and looks strong again. The Test Day times where very comparable to 2915 with clearly more to come, and this despite the regulatory attempts to reel in the cars.

With just the two cars though staying out of racing, and reliability trouble is the key, and with 60 cars now on the grid, the traffic issues just got a little bit worse! 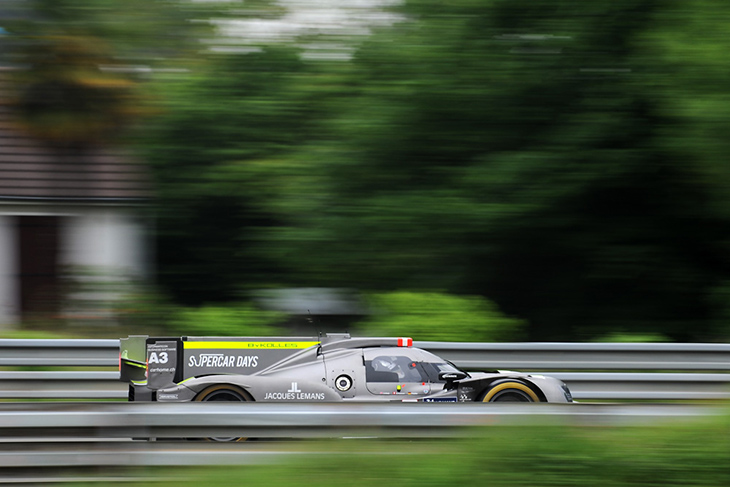 The ByKolles Racing run CLM AER has seen the introduction of a radically different front and rear end aero package at the start of this year but still seems a step behind the Rebellions in the three car LMP1 privateer sub-class.

That’s likely all the more troubling for the team now it is clear that Rebellion has seemingly reduced its reliability woes of last season with a reversion to the same spec of AER used by the Austrian-flagged team.

Kaffer was fastest of the trio at the test day but there will need to be more pace.

All three private P1s are now on Dunlop rubber but again there seems to be less of a positive impact here than elsewhere.

On the driving front Simon Trummer returns for a second season (compulsory Swiss driver!), Briton Oliver Webb steps up for his first LMP1 campaign, and Pierre Kaffer, until the Test Day cup-tied with North American commitments, rejoins the team.

Kaffer was fastest of the trio at the test day but there will need to be more pace (the CLM six seconds down on Rebellion), and a near trouble-free run ion the #4 isn’t to find itself in a race long battle through the LMP2 field. 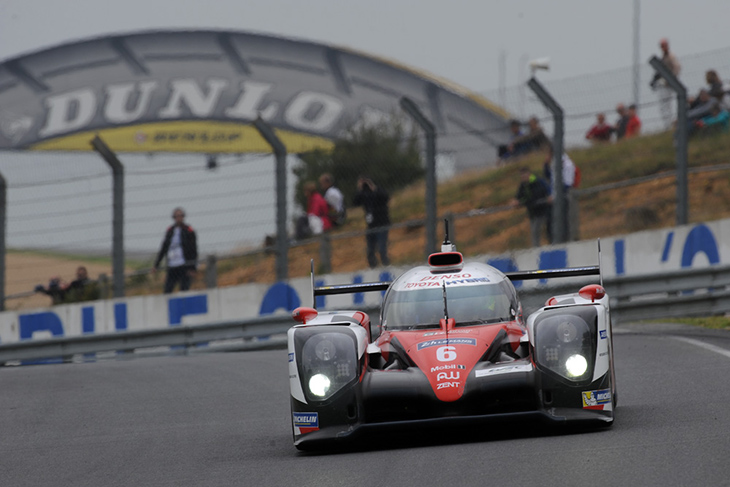 Toyota had an ominously quiet Test Day, showed flashes of speed and all the signs that its powder was being kept dry in a locked vault behind barbed wire.

The TS050s sported a revised low-downforce package from that seen at the Prologue test and is reportedly proving to be very light on its tyres too.

We’ve already seen at Spa that the cars have real speed, but their reliability proved worrisome. Toyota though have discovered the root cause for both seemingly unconnected mechanical failures. It seems that the TS050s were bottoming out badly at Spa and the resultant shocks through the structure caused the failures. Problem understood, and we are told, remedied!

The car also looks very neat and tidy and Toyota has a mix of solid and very quick drivers with a huge level of experience on tap and a couple of drivers who will wring the last ounce out of the car should that be required.

We’ve already seen at Spa that the cars have real speed, but their reliability proved worrisome.

Of the two crews the #5 looks the quicker one with the terrier-like Anthony Davidson as hugely competitive as ever, Seb Buemi back in excellent form too and Kaz Nakajima showing as amny of the 19 ex-F1 men do on this grid, that an underwhelming record in F1 is not necessarily an effective barometer for racing talent.

In the #6 TS050 Mike Conway continues to adapt to the LMP1 code, an altogether different style than anything else in motorsport. Stephane Sarrazin meanwhile is one of those drivers that seemingly everyone would like to see win the big race; he’s finished second overall here three times without taking a win and 2016 marks his 15th participation (he has only missed the 2003 race in the 21st century).

In contrast Kamui Kobayashi makes his Le Mans LMP1 debut (after racing for AF Corse in a GTE Pro Ferrari previously, and looked to be his usual fast and chatty self at the test)

Oh and of course Seb Buemi provides the required ‘Swissness’. 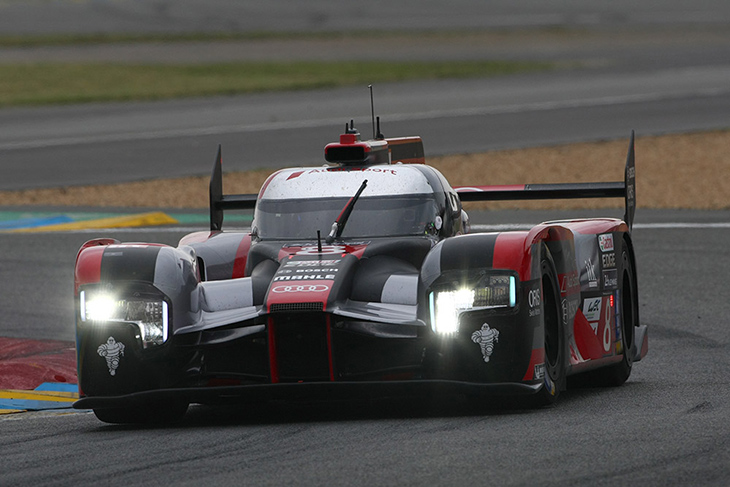 It was a visual shock top see just two Audi garages on the pitlane at the Test Day but of course we’ve known since late last year that Audi has dialled back its Le Mans effort to just the pair of full season FIA WEC R18s.

Lets get over the elephant in the room first, the new R18 to most is not a good looking car, it is fast, it is undoubtedly highly efficient, but it is unlikely to make the cut in any contest for the most beautiful sports prototype of this or any other era (unless you feel the same as DSC’s deputy ed does about it).

But that simply doesn’t matter when the game is to effectively, sneak up on the Porsche 919, club it over the head, and drive off into the distance.

Audi’s 2016 contender is clearly more of a match for the 919 Hybrid and if that puts the Neuberg based team on the front foot then the racing beer goggles will be donned and when Sunday morning dawns if either car is in control of the race she’ll surely look very beautiful indeed.

As with the other factory teams there’s a whiff of unreliability about the 2016 effort though, for reasons we’re not going to go into here, that impression is less valid for the Audi effort than for the others!

The game is to effectively, sneak up on the Porsche 919, club it over the head, and drive off into the distance!

The impression still remains though that this car, more than the Porsche or the Toyota, is operating close to the development edge. Will that lead to shocks for the team at Le Mans? You have to say that in Audi’s case that’s unlikely.

On the driving front there’s no change for either car, the Fässler (Swiss!), Treluyer, Lotterer combo is as strong as ever whilst Messrs di Grassi, Jarvis and Duval are gelling well too now.

A notable point too is that Le Mans marks the final race with the team for their long-standing, hugely successful and highly respected race engineer Leena Gade before she takes up her new role within the management group of Bentley Motorsport managing customer efforts. 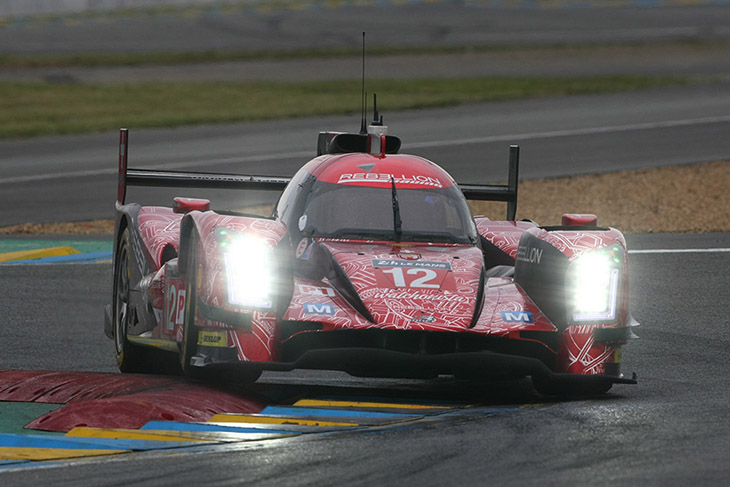 Ah Rebellion, banner carriers for several seasons now of the LMP1 Privateer class, and suddenly hitting a rich seam of reliability as the headlines elsewhere tale of woes for the much faster factory hybrids.

It all fits together neatly for a storyline that reads: “Rebellion for a podium or better?” And you’d have to have a heart of stone not to relish that as even an extreme outside bet!

You have to say, on the basis of effort expended they deserve a result or two and a pair of overall podium finishes in the first pair of WEC events this year have whetted the appetite even more.

So what’s going on at Rebellion? First the two major changes, a switch to Dunlop tyres has certainly worked for the team, the cars ARE faster, considerably so at the Test Day, that despite the second major change, a step back in development versions of the AER twin-turbo P60 V6. It was done in search of reliability and thus far it seems to have worked well.

The R-Ones are very, very slippery, easily the fastest cars through the speed traps at Le Mans, though their lack of hybrid punch out of the corners, and the aero package developed for sums this side of the national debt levels of a G8 country, see them drop globs of time to the Hybrids.

Bart Hayden and co know the score, little less than an entirely clean run will do, and they’ve done it before. The team finish fourth overall twice, in 2012 with the Toyota V8 engined Lola, and then in ’14, same engine but in the current Rebellion R-One chassis.

Rebellion COULD live up to its pre-race billing and spring a surprise, or the bad luck could come flooding in.

The #12 car took both of those fourth places with Nico Prost and Nick Heidfeld both involved in both results. They’re back in the bid to go one better (at least) with Nelson Piquet Junior joining the effort, the Brazilian making his return to Le Mans after a ten year gap, he was last here with the Team Modena Aston martin DBR9.

It’s the sister #13 R-One though that is in the better form, Mathéo Tuscher, Dominik Kraihamer and Alexandre Imperatori having taken maximum LMP1 Privateer points from Silverstone and Spa with Imperatori the fastest man in the sub class at the Test Day.

It should be noted here that the Rebellion Team are the only LMP1 squad on the grid that doesn’t have one Swiss driver on their roster, but that’s because they have two! Only appropriate though for a Swiss-flagged, though UK based squad. Tuscher we believe is also the only teenager amongst the 180 drivers.

The feeling here is that this is going to go one of two ways, Rebellion COULD live up to its pre-race billing and spring a surprise, or the bad luck could come flooding in.

Whatever awaits you can be sure of one thing: Rebellion are never, ever, boring!