After reviewing the Mother Chassis’ entrants in this year’s Super GT GT300 class now its time to review the glut of FIA GT3 category cars – twenty-one in total this year, representing nine different manufacturers. The 2017 class is headlined by two “new” cars – starting with the two 2017 Lexus RC F GT3s of LM Corsa.

LM Corsa have run the “prototype” RC F GT3 for the last two seasons with very minimal success, but their input with the old car went a long way into developing the first proper GT3 Lexus that saw its race debut in the IMSA WeatherTech SportsCar Championship earlier this year. 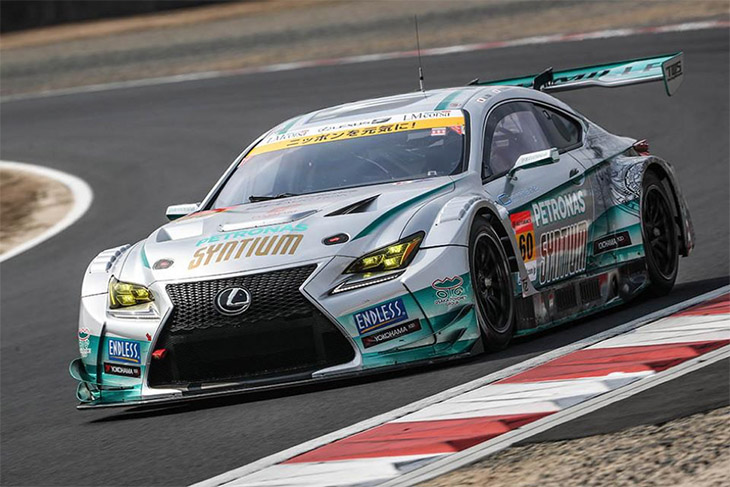 After two seasons with little results, former GT500 champion Akira Iida and co-driver Hiroki Yoshimoto are ready to get back to their winning ways in the #60 Syntium RC F, which carries Yokohama tyres.

Yoshimoto is arguably one of the best GT300 drivers on the grid, with three class wins at the Suzuka 1000km to his name. But for 17-year veteran Iida, this could be his last chance at real success in Super GT.

The #51 team also have the advantage of preparation from Super Formula champions INGING Motorsport, as well as Bridgestone tyres – they may have the combination to be serious title contenders. The second “new” GT300 car isn’t new at all, proven successful the world over, but 2017 marks the Super GT debut of the loud, burly, turbo-charged Bentley Continental GT3 in the hands of EIcars Bentley TTO (Teramoto Technical Office).

The team relies on crafty veterans Yuji Ide and Ryohei Sakaguchi. Ide is a former race winner in both GT500 and GT300 categories, and Sakaguchi has won four Super Taikyu class championships.

It’s a first-year team, so expectations should be tempered a bit – but a burst of speed in the final tests at Fuji does give the team some hope for 2017 success.

Nissan have four turbocharged GT-R GT3s on the grid in 2016: One for factory-run NDDP Racing, one for former GT300 champions Gainer, and one each for scrappy independents Tomei Sports and Dijon Racing. 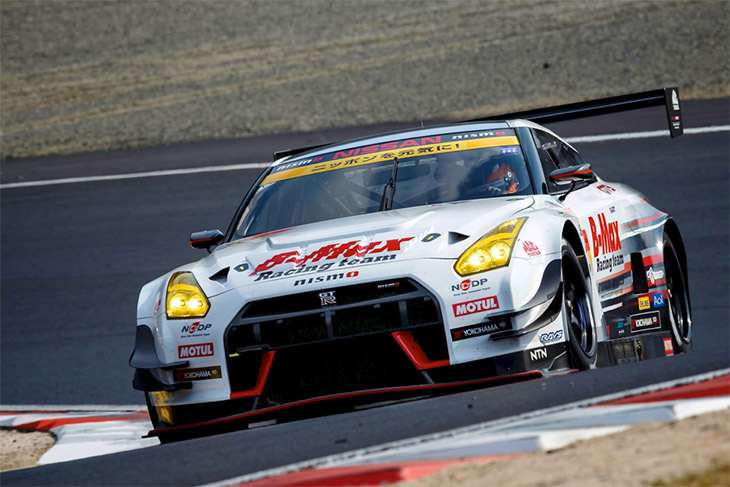 Two-time GT300 champion and second-generation racer Kazuki Hoshino is the team’s veteran driver, partnered by young Nissan protegé Mitsunori Takaboshi, back full-time after prioritizing Blancpain GT last season. Takaboshi was a stellar rookie with NDDP Racing two years ago, and in testing, was the fastest driver at the Fuji tests.

In total, the B-Max GT-R topped three out of six test sessions in March, and the combined talents of the explosive Takaboshi and the experienced Hoshino make NDDP Racing a team to watch for this season. 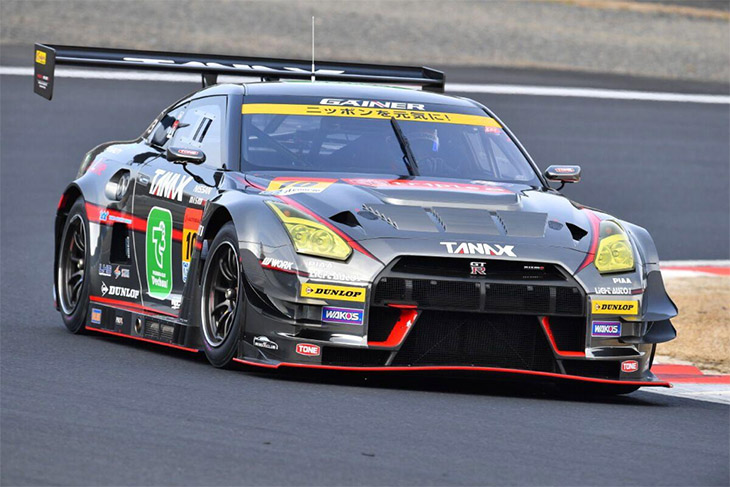 Gainer’s Nissan GT-R is the only one running on Dunlop tyres. Ryuichiro Tomita steps up to the lead driver role after an impressive 2016 season, and is joined by former Pacific/Gulf Racing driver Hiroki Yoshida, just off a partial Asian Le Mans Series LMP3 campaign with Jackie Chan DC Racing this winter.

It’s a big step up for both drivers, who will now drive the car that won the GT300 title just two seasons ago.

Tomei Sports have never scored a top-ten finish in their current decade-long tenure in GT300, but they’re hoping to turn it around this season with the combined driving talents of gymkhana champion Yusaku Shibata, and former GT300 champion Takayuki Aoki, who will both drive in the opening round at Okayama. Team partner Atsushi Tanaka is also expected to drive later this season.

Dijon Racing lost their signature bubblegum pink livery from Endless Sports in the off-season, as well as the speed of top-flight drivers like Takaboshi and Aoki. They’ll carry on in 2017 regardless, starting the year with the journeyman lineup of the eccentric and bespectacled “Dr.” Hiroshi Takamori, and co-driver Masaki Tanaka.

There are also four Mercedes-AMG GT3s, which won its debut race in 2016, and hope to capture a first GT300 title in 2017 between one of their four teams – Goodsmile Racing with Team UKYO, Gainer, K2 R&D LEON Racing, and Rn-sports. 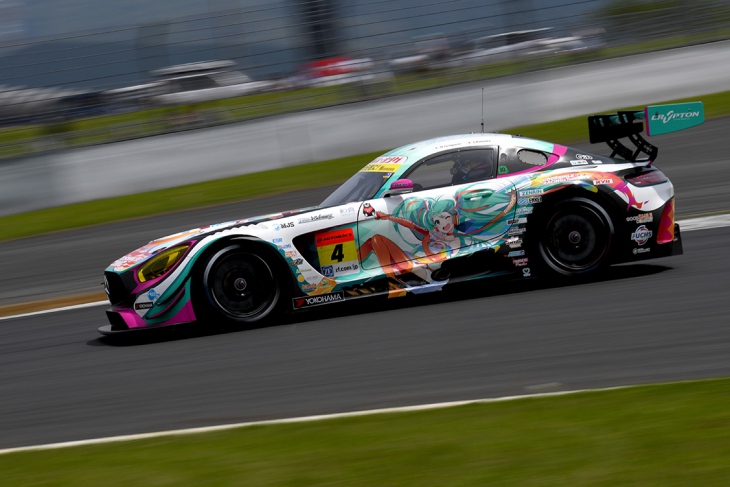 Goodsmile Racing with Team UKYO are still the most popular team in GT300, perhaps across all of Super GT. Their vibrant anime-inspired “itasha” liveries featuring Vocaloid character Hatsune Miku go a long way, as does their annual Personal Sponsorship programmes to get the fans directly involved in supporting the team.

Racing legend Ukyo Katayama is the team principal, and with their combined skills and winning experience, GSR wants to get back to their winning ways – they haven’t won a race since switching to Mercedes in 2015.

Gainer is once again a house divided in 2017, with their #10 Nissan GT-R mentioned earlier, and their #11 Mercedes-AMG GT3, featuring the veteran driver combination of Katsuyuki Hiranaka and former International F3000 champion Björn Wirdheim of Sweden.

They were fastest in the first of two test sessions at Fuji, and like the GT-R out of the same stable, the Gainer AMG also carries Dunlop tyres – combine that with a driver lineup that’s already finished 2nd in the championship in 2013 and 2014, and this team always has potential to do well. Big things are expected out of K2 R&D LEON Racing, their black Mercedes-AMG now carrying Bridgestone tyres in 2017 after switching from Yokohama this offseason.

Second-generation veteran Haruki Kurosawa, and genuinely rapid youngster Naoya Gamou, led the team to their first race win last year at Okayama. Now they’ll be entrusted to lead the LEON Cvstos AMG to its first championship in GT300 – but they’ll need to avoid another late-season slump as they suffered in 2016. 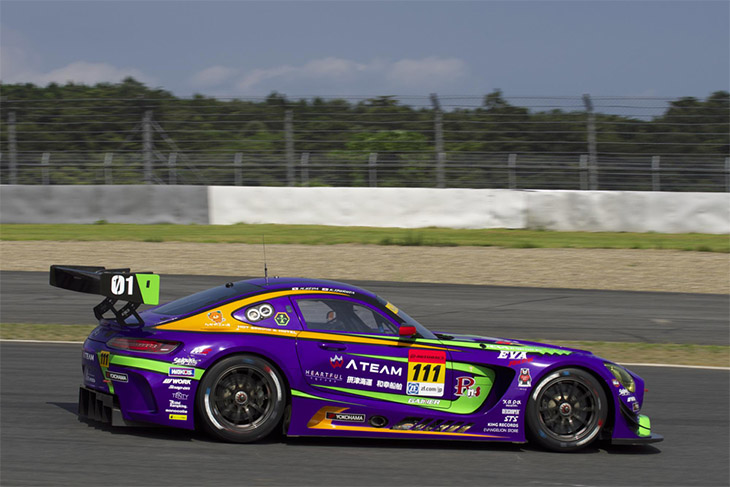 Rn-sports (“Rounye sports”) return with the colours of EVA Racing, promoting the theatrical reboot of the beloved animated series Neon Genesis Evangelion by adorning their Mercedes in the unmistakable purple of the awesome EVA Unit-01.

All-Japan F3 graduate Keishi Ishikawa joins Toyota 86/BRZ Race graduate Ryosei Yamashita to form another all-rookie driver lineup, with Masayuki Ueda standing down to part-time driving duties and taking over as team director. It’s Rn-sports’ third season as a stand-alone team, and they’re hoping this is the year they start to make an impact on the GT300 field. 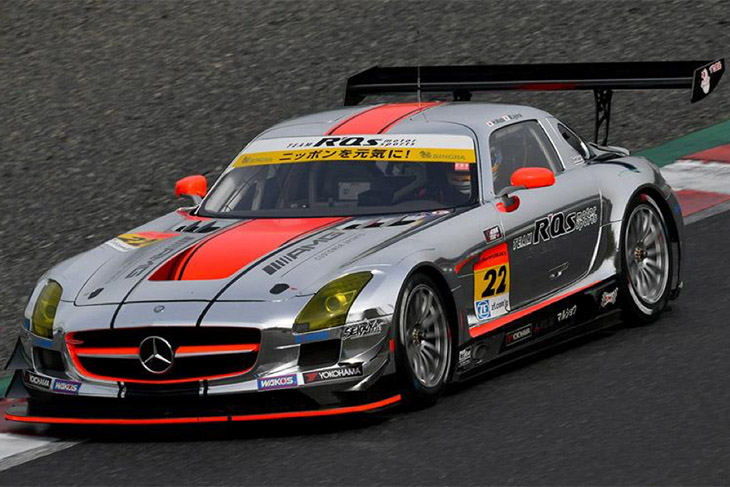 There is also a fifth Mercedes GT3 car, the old Mercedes-Benz SLS AMG getting what should be one last tour of duty with independents R’Qs Motor Sports, and experienced drivers Hisashi Wada and Masaki “Guts” Jyonai. Last year, however, they garnered more attention for a string of clumsy incidents unbecoming of a team with this much experience. 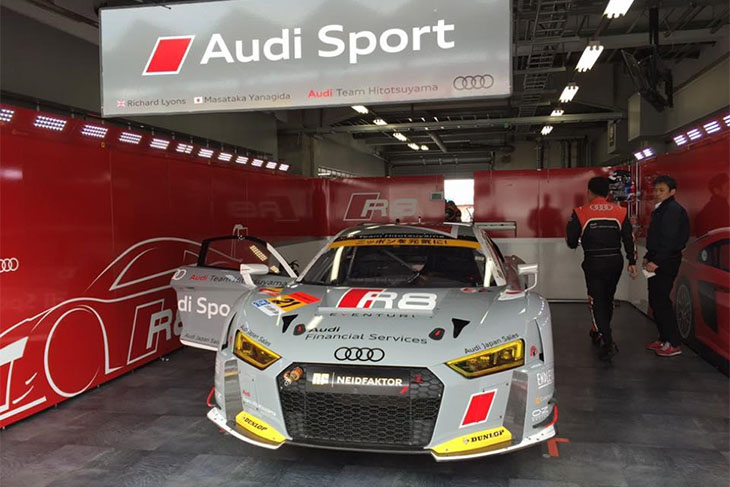 Richard Lyons and Masataka Yanagida are the first former GT500 champions to race together in GT300, and they’re two of the most experienced and successful drivers in the field. Ulsterman Lyons is in his best form since going to GT300 five years ago, and long-time Nissan ace Yanagida is a high-profile acquisition for Hitotsuyama, having been displaced from GT500 last year.

Team Taisan SARD, GT300’s winningest team in history, are moving to a new headquarters in Fukushima Prefecture in 2017, hoping to help rebuild the devastated region six years on from the fallout of the Great Tohoku Earthquake.

They have an all-new driver lineup for 2017, with sophomore driver Shinnosuke Yamada joining from Team Upgarage with Bandoh, and alongside him is Australian newcomer Jake Parsons, who’s raced single-seaters in Asia and America for the last few years. Hideki Noda will take over as team director from the SARD half of the operation.

Big things are also expected out of Porsche and their 911 GT3-R in 2017, following some solid pre-season test results from both D’Station Racing and Pacific with Gulf Racing.

Tomonobu Fujii is back with Porsche for the first time since 2013, still searching for his first GT300 crown – he was Super Taikyu’s ST-X champion a year ago in a Nissan GT-R. But the driving acquisition that may have put D’Station Racing clear over the top is 25-year-old Sven Müller, Porsche Motorsport’s newest young superstar, and the reigning champion of Porsche Supercup and the German Carrera Cup.

This is a team with real championship aspirations in 2017, make no mistake about it. 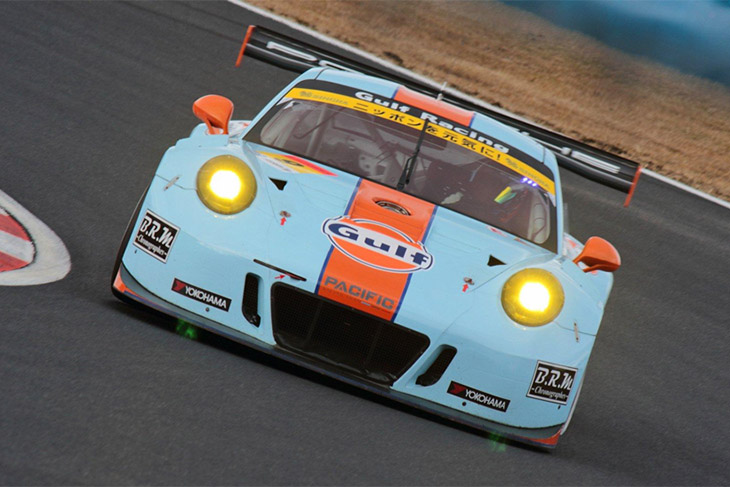 More surprising is the form of Pacific with Gulf Racing, who scored just two points last season, but were third-fastest in the final test at Fuji Speedway, and look to make an enormous turn-around in 2017.

Well-traveled Kiwi Jono Lester was a revelation in testing, putting the Gulf Porsche in its fabled blue and orange colours near the top of the leaderboards at Okayama and Fuji. His co-driver, Kyosuke Mineo, is a former GT300 champion.

BMW have a duo of capable M6 GT3s, one each for BMW Team Studie and Autobacs Racing Team Aguri. While the M6 was quick, it was sometimes lacking for reliability last season, which cost them better results. 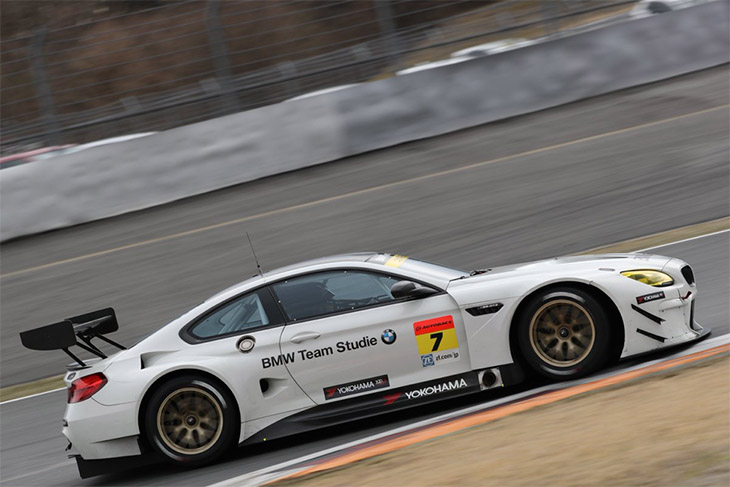 BMW Team Studie once again rely on the talents of BMW factory ace Jörg Müller, and 2004 Le Mans winner Seiji Ara, back for their fourth season at the team. Yasuaki “Bob” Suzuki is the team’s passionate, outspoken director who is, above all else, motivated by his team’s supporters and their desire to win.

Despite the incredible CVs of drivers Müller and Ara, Studie haven’t won a race since spinning off in 2014 – and last year they were snakebitten with a number of mechanical issues. That cannot persist in 2017. 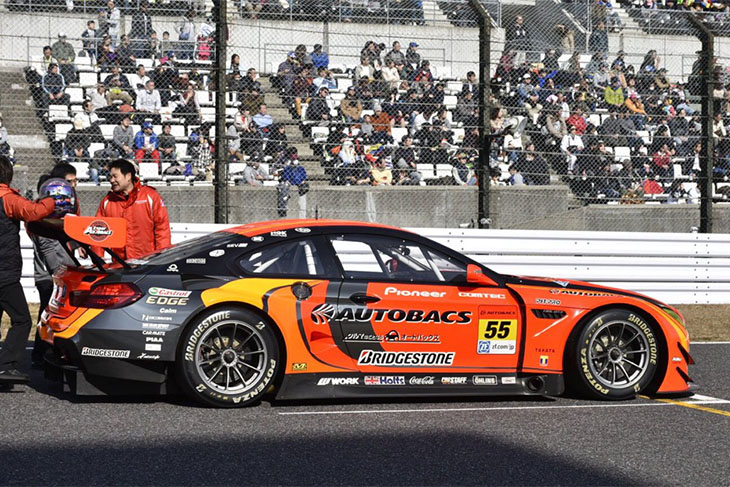 ARTA sticks with BMW, to the surprise of some, given their ties with Honda and the launch of the NSX GT3 this year. “Drift King” Keiichi Tsuchiya manages this side of the ARTA Project, and their BMW runs on Bridgestone tyres.

Shinichi Takagi is a decorated, fast veteran driver, second all-time in career wins, partnering second-generation British newcomer Sean Walkinshaw, formerly of Nismo Team RJN in the Blancpain GT Series. They were very hit-or-miss in 2016, ending the season on a sour note at Motegi. 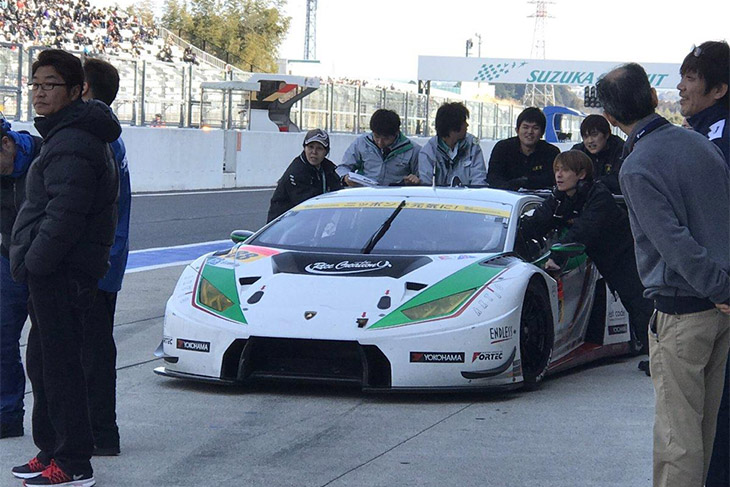 With Lamborghini Team Direction suspending activities this offseason, it’s up to longtime Super GT mainstays JLOC (Japan Lamborghini Owner’s Club) to represent Lamborghini Squadra Corse on their own for 2017.

JLOC have two Huracán GT3s ready to race in 2017. The #88 ManePa (Money Partners) Lamborghini is JLOC’s flagship car, and will be driven by the two-time GT300 champion and series legend Manabu “MAX” Orido, partnered with last year’s Super Taikyu premier class champion, Kazuki Hiramine, who was properly quick all of last season. 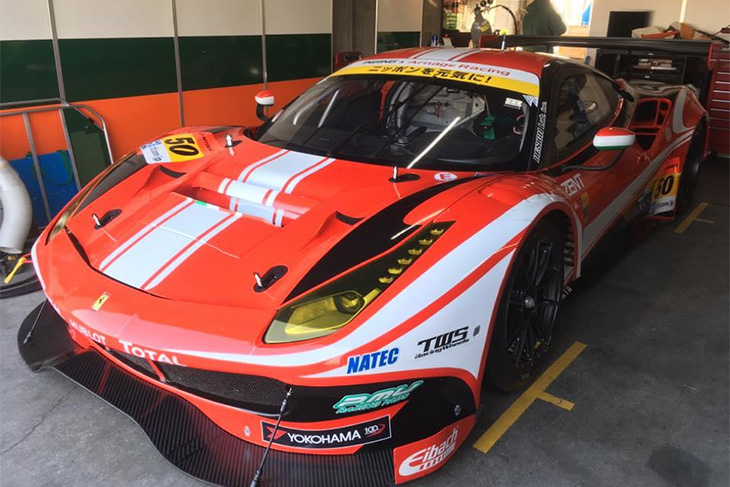 Finally, a single Ferrari 488 GT3 will be fielded by independents Arnage Racing, who joined forces with INGING Motorsport to form the new INGING & Arnage Racing.

They not only purchased last year’s #51 LM Corsa Ferrari in the off-season, but also brought in a new driver lineup: Three-time GT300 champion Morio Nitta, the winningest and most experienced driver in the class, joins Atsushi Tanaka, a gentleman driver with considerable skill.

There is a great mixture of drivers of all skill levels, teams both established and new, and of course, the variety of vehicles in GT300 – it’s a class that truly has something for everybody.