Toyota scored its second WEC race win of the season, and its first 1,2 finish since Shanghai in 2014 (pictured below). 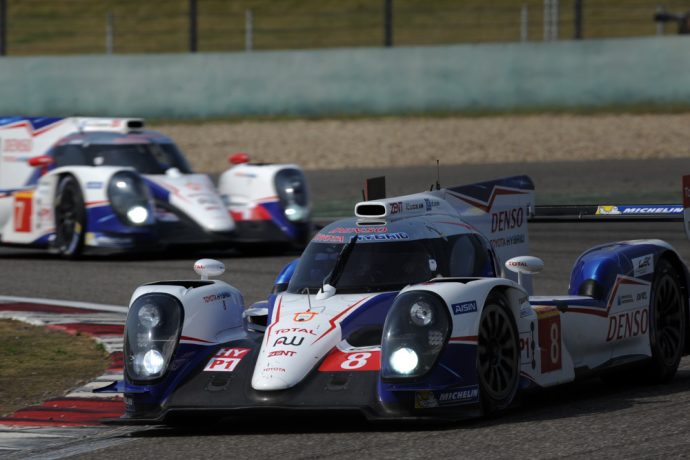 The win means that the #8 crew of Sebastien Buemi, Anthony Davidson and Kazuki Nakajima now have a 17-point lead in the Drivers’ World Championship.

It also means that Toyota takes the lead in the Manufacturers’ Championship and will go to Le Mans with an 8.5-point advantage. 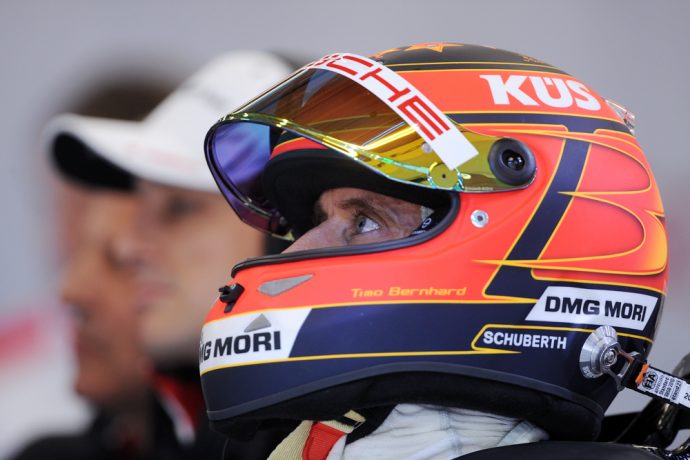 The win also takes Toyota back above Porsche in the total of overall WEC wins with 13; Audi has won a record 17 times.

It did mark the eighth consecutive appearance on a WEC podium for Porsche’s Timo Bernhard and Brendon Hartley – a streak that dates back to the Nürburgring last year!

Porsche also scored its first Pole Position of the season though, and extend its record to 16. Andre Lotterer’s switch to Porsche meanwhile sees him now one of only two FIA WEC ‘ever-present’ drivers.

A final LMP1 H note is that Nico Lapierre made his return to the Toyota factory team for the first time since CoTA in 2014, Yuji Kunimoto meanwhile made his WEC debut, though he struggled to find pace in the low-drag #9 TS050. On a more positive note, the #9’s race start also marked the first time which Toyota has raced with a third car in the World Endurance Championship. 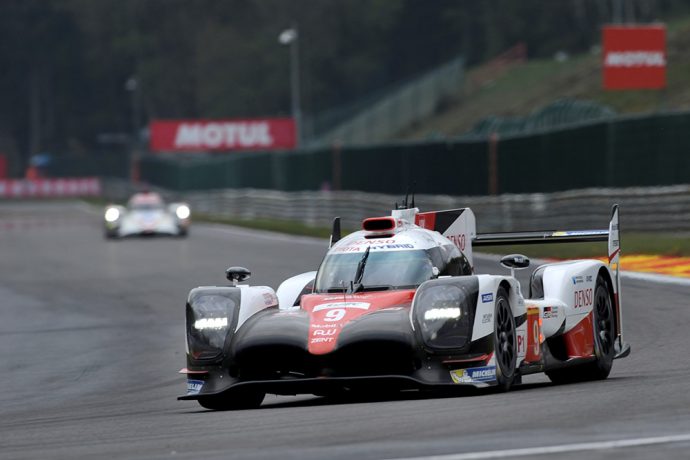 In P1 Privateer, ByKolles Racing finished sixth after a near trouble-free drive to the flag, it’s the team’s equal best overall finish in the WEC, oddly equalling its finishing position in the Spa race of 2016.

The result saw the #4 car finish ahead of the full LMP2 field, and saw the car register the fastest trap speed in WEC history at Spa at 320.6kph, beating the previous record held by Porsche at 319kph set two years ago.

The finish also marks the highest WEC finishing position in LMP1 by a Nissan engined prototype!

In the LMP2 class TDS Racing took its first win in the FIA WEC with its G-Drive-branded #26 ORECA 07 Gibson. That marks a win for a fourth team operating the G-Drive effort in the WEC after ADR Delta, Oak Racing and Jota Sport. 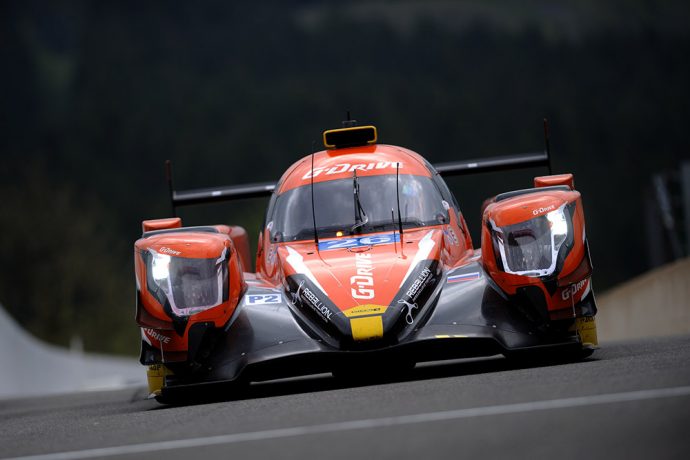 Driving for the team, Roman Rusinov extends his record total of WEC LMP2 class wins to 16, this win a fourth in the past 5 races! It marks too a first win in the FIA WEC for both Alex Lynn, and for Pierre Thiriet.

For the car, it was a record 20th win for an Oreca chassis in the class, in both Nissan and Gibson-engined form.

Bruno Senna scores his eighth consecutive LMP2 podium finish, dating back to the race at the Nürburgring. In the process, Rebellion scored its second LMP2 podium on the bounce, and its second ever LMP2 podium in the WEC. 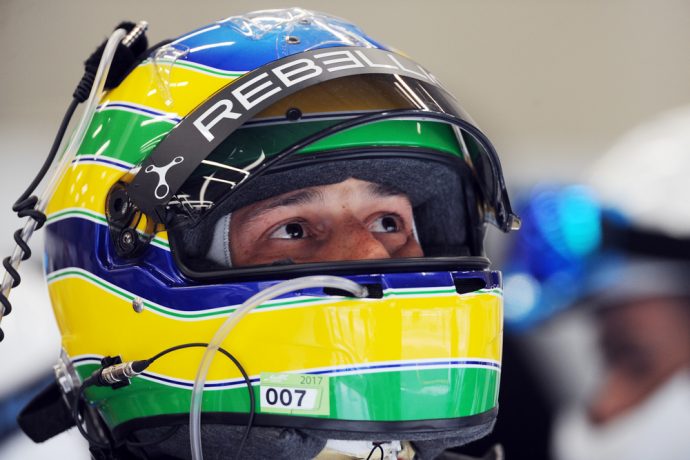 Jackie Chan DC Racing made a second visit to the WEC podium in 2017 after its Silverstone win, both results coming for the #38 ORECA of Oliver Jarvis, Thomas Laurent and Ho-Pin Tung. It was Jarvis’s third consecutive podium visit after winning the final race of the 2016 season overall with Audi.

For Tockwith Motorsports, not only did the race at Spa mark the team’s debut in the WEC, it was the maiden appearance for drivers Phil Hanson and Nigel Moore as well as the Ligier JS P217 as a chassis. And while it wasn’t Karun Chandhok’s debut appearance in the WEC, it was his first in LMP2, and his race since in the championship since the inaugural season’s finale at Shanghai in 2012 where he drove for JRM in LMP1. 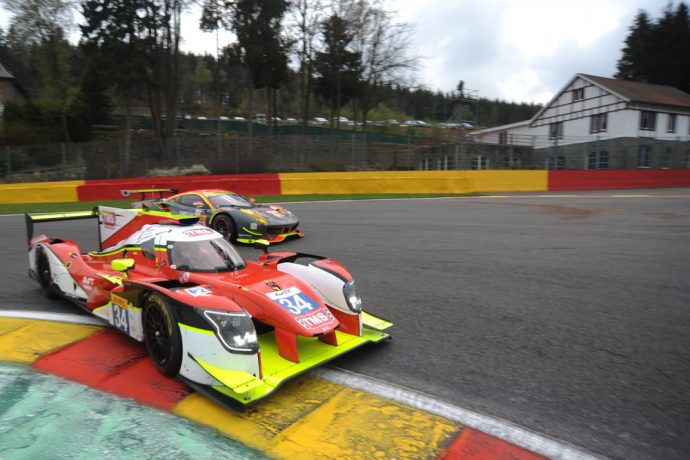 In the championship standings the #38 Jackie Chan Racing squad holds a slim three-point lead over the #26 G-Drive Racing trio, the team coming away with from the two pre-Le Mans rounds with 40 pints. The #31 Vaillante Rebellion crew sits a further point astray of the #26.

AF Corse also came home with a 1,2 finish, its first since Nürburgring last season. That result though saw the #51 come home ahead, to find the last 1,2 with the #71 as winner you need to go back to Silverstone in 2016.

Sam Bird and Davide Rigon’s last win came at the following race, so the weekend’s victory sees the pair with a Spa double. Bird scores a seventh class win in the FIA WEC, five now in GTE Pro and a pair in GTE Am. Davide Rigon meanwhile scored his fourth WEC class win, three in Pro and a fourth in Am. 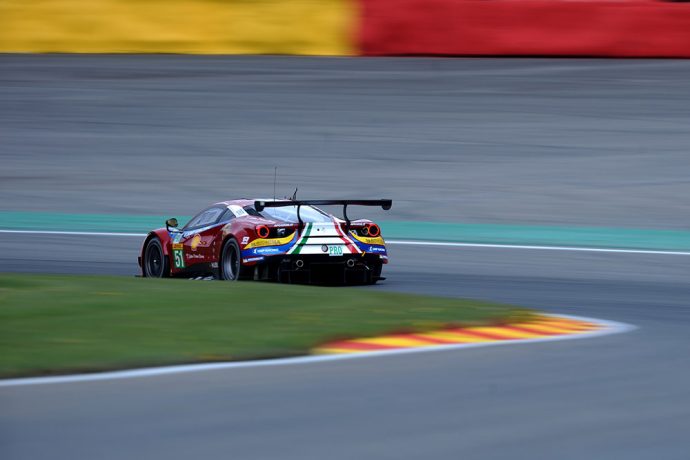 The third place for the #67 Ford GT sees the team score its eighth WEC podium finish across the two cars.

Billy Johnson earned his first WEC Podium (though he scored the points for the WEC win at Le Mans last year as part of the first WEC crew home, fourth overall in class).

In the Aston camp, despite it being a quiet weekend, Darren Turner celebrated his 80th career race start for Aston Martin Racing and is the other FIA WEC ‘ever present’ driver. 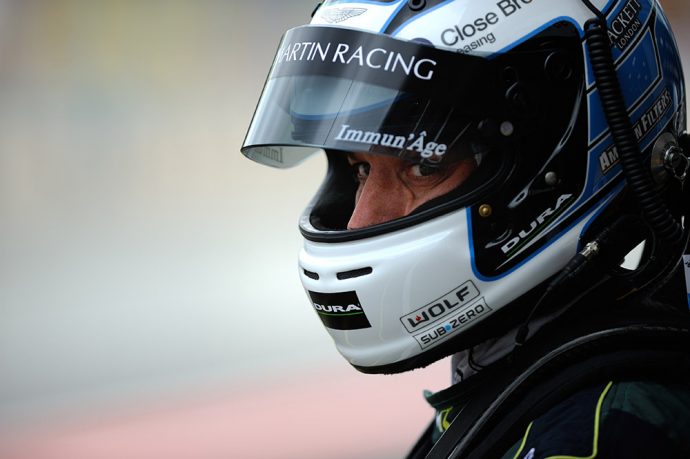 In the points standings the #67 Ford GT crew of Andy Priaulx, Harry Tincknell and Pipo Derani lead the way but only two points clear of both the #71 and #51 AF Corse Ferrari crews.

Like Darren Turner, Pedro Lamy had a race to remember for Aston Martin Racing. Lamy managed a record 15th GTE Am win on his 60th start for the Aston Martin Racing team. The #98 trio took a third consecutive win at Spa with Paul Dalla Lana scoring his 12th class win, Mathias Lauda his ninth. 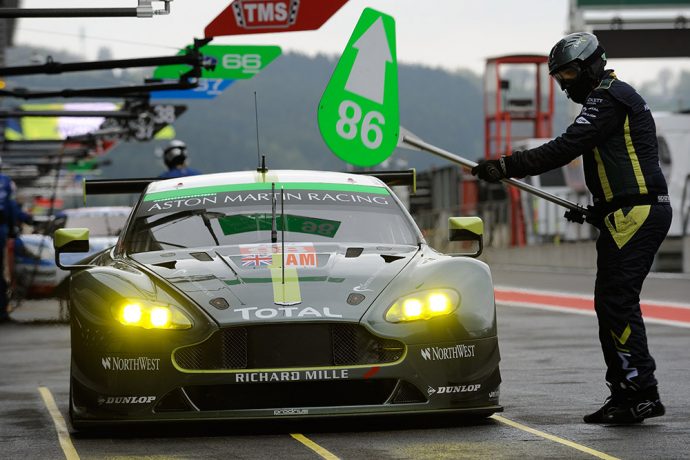 It was the record 32nd win for Aston Martin racing across both GTE classes, and a record 20th for the AMR squad in GTE Am.

All 32 wins meanwhile have been taken by the V8 engined Vantage GTE, by far the most successful car in WEC history in terms of class wins (and in terms of pole positions in both GTE Pro (20) and GTE Am (24)). The win at Spa was the first for the 2016-spec Aston Martin Vantage in the Am division.

The #77 Dempsey Proton Porsche came home a fine second, a 100% podium finishing record for messrs Ried, Dienst and Cairoli in 2017. It also marks the seventh consecutive podium finish in the WEC for Christian Ried. 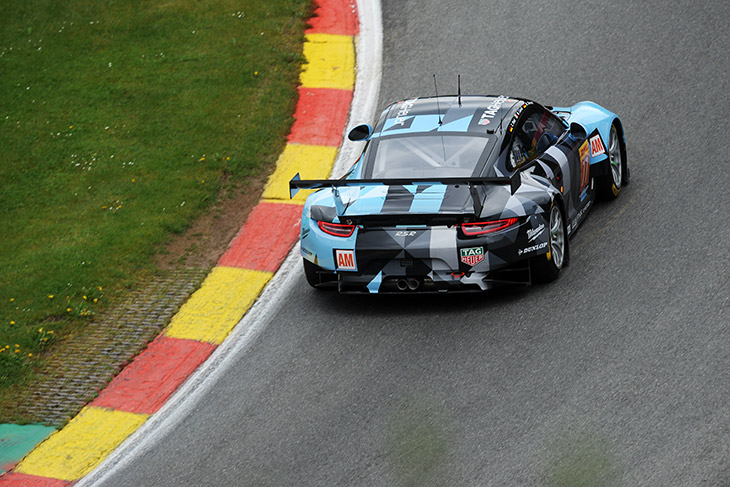 Third place for Silverstone winners Clearwater Racing gives the team, the Ferrari 488 and the driving trio of Matt Griffin, Keita Sawa and Mok Weng Sun a 100% podium finishing record in the 2017 WEC too.

The Singaporean team sits second in the championship standings, five points behind the #98 Aston Martin crew and seven ahead of the #77 Porsche boys.