The #22 G-Drive Racing by DragonSpeed Oreca 07 of Memo Rojas, Ryo Hirakawa and Léo Roussel won the 4 Hours of Monza, headlining a 1-2 for the DragonSpeed team, with its other #21 Oreca of Ben Hanley, Henrik Hedman and Nicolas Lapierre coming home second. It was a historic result for the team, its first 1-2 in the ELMS, marking the first win in the series for the Oreca 07 in the process.

It was a dramatic second half to the race though, and not an easy ride for the team. Leo Roussel created a comfortable lead of almost a minute before handing over Hirakawa for the final stint. Hirakawa looked to cruise to victory, but instead was handed a drive-through for the car not respecting Full-Course Yellow speeds during the race. It brought the lead gap down to around 20 seconds, the High Class Racing Dallara at the time sitting second.

The Dallara had to splash at the end though, allowing Hanley in the #21 DragonSpeed Oreca to catch up and make a pass for second just two laps from the finish at the second chicane up the inside through traffic. Hirakawa then slowed down to conserve fuel, reducing the winning margin to just 2.2 seconds at the end.

The High Class Dallara of Anders Fjordbach and Dennis Andersen took the final podium spot – its second in two races – ahead of the #39 GRAFF Oreca which led early and faded during the middle stints. The #47 Cetilar Villorba Corse Dallara ended up fifth, despite being in contention for the win, stopping out on track with electrical issues with 90 minutes remaining while Andrea Belicchi was in the car before rejoining proceedings.

There were issues for other LMP2 runners, the #40 Graff Racing Oreca running second early on in the hands of Richard Bradley before suffering an electrical issue and having to reset the system, an issue which would return several times in the race, Bradley delivering a blunt statement of concern to ELMS TV about the continuing electrical issues for the new LMP2s, issues which struck at least three other cars durning the race.

Tockwith Motorsports’ Ligier meanwhile suffered a failed alternator, the replacement counting out any chance of a meaningful result. The #25 Algarve Pro Ligier ran with the leading pack for a while but it too hit electrical trouble.

United Autosport’s #34 Ligier shows flashes of pace, and plenty of fight but was not the force it had been at Silverstone, Monza it seems not likely to be on the Ligier team’s lists of favourite races!

Neither the Panis Barthez nor the IDEC Sport Ligiers really featured, Olivier Pla showing some pace in the #28 but from too far back to really matter.

#The #29 Team Nederland Dallara was hit hard in the rear on the opening lap leaving the team to try to make up ground. Jan Lammers though was beginning to show signs of the old fire in the belly!

First win for Norma in LMP3

In the LMP3 class, M.Racing YMR also enjoyed a historic 1-2, its Norma M30 of Erwin Creed and Ricky Capo taking the win – the first ever for the chassis. Second was the team’s Ligier, a lap off the leading duo but 26 seconds ahead of the Ultimate Ligier that came home third. 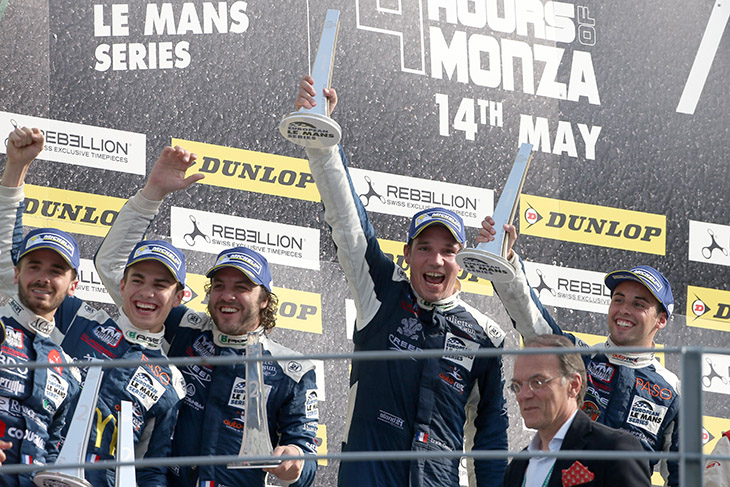 United Autosports had a mixed bag of fortunes, the Silverstone winning £2 Ligier of Sean Rayhall and John Falb running very strongly and looking set to be very much in the mix for the win before Rayhall miscalculated a pass on the #9 AT Racing Ligier, the pair clashing heavily and carrying both into (and in the case of the #2) through the gravel trap to rejoin. A gearbox issue late in the race cost further time and positions.

The sister #3 car meanwhile started strongly, dropped back in the order in the middle part of the race as Mark Patterson went head to head with other team’s Pros, but then saw Wayne Boyd mount a mighty fightback to come within an ace of a podium finish.

Several other LMP3 teams hit trouble, the #9 AT Racing JS P3 hit twice before the car was retired, first by a highly over-ambitions #16 Panis Barthez car which borough out the first of three FCY periods, then later by Rayhall.

The #10 Team Oregon Norma also had a traumatic time, the car suffering front end damage after getting it wrong under braking at the first chicane and then getting involved in a giggle of other incidents after repairs had been made. There were incidents too for the #5 By Speed factory, #4 Cool Racing, #8 Duqueine and #12 Eurointernational Ligiers with the battle to get into the podium fight interrupted for a number of cars for FCY-related penalties.

RLR Sport lost time to a spin for John Farano, reacting to the Oregon Norma spinning ahead of him whilst the #11 Eurointernational Ligier’s charge was hampered by a bout of cramp for Giorgio Mondini at the end of an iron-man stint – 5th the best they could salvage.

The #13 Inter Europol Ligier was in the mix again but fell behind Boyd’s charge to the front – 6th was a good result for a hard afternoon’s work.

For JMW Motorsport GTE, it was a dream result, the team giving its 458 Italia a final sendoff in style, winning the race by 7.9 seconds over the TF Sport Aston Martin which climbed into contention late in the race. Early the Proton Porsche led, before a long stop caused it to drop down the field. It promoted the #55 Spirit of Race Ferrari to the lead after Aaron Scott fought his way to the lead early. 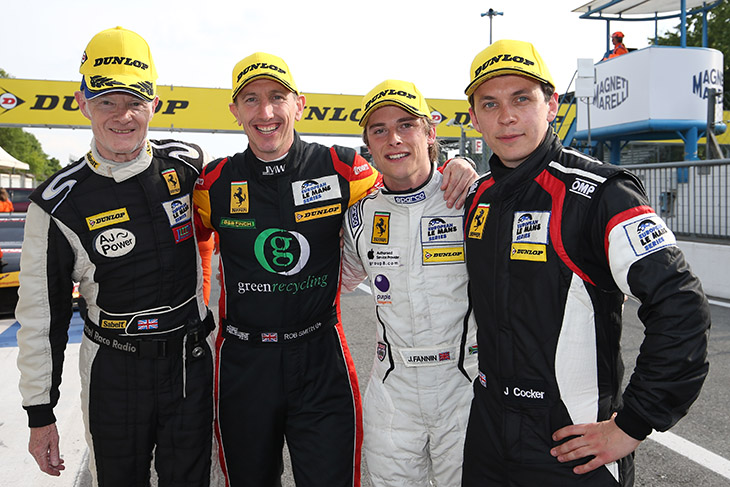 The Matt Griffin, Duncan Cameron, Scott Ferrari retired from the lead though with an engine failure, opening the door for Jody Fannin, Jonny Cocker and Rob Smith to take the win, all three drivers running faultlessly to the flag.

Fannin opened proceeding for the #66, dropping into the pack before picking off the other GTEs to run a strong third before he handed over to Rob Smith who drove a sterling stint, passing Brandela in the Larbre Corvette on track and then inheriting the lead with the retirement of the #55 under Duncan Cameron almost at the halfway point.

Jonny Cocker took over and managed the gap to a now charging Nicki Thiim before handing the car back to Jody Fannin who brought the old lady home. It marked a career for the #66 that has seen eight ELMS race wins, the GTE title in 2012, a hugely well fought second place in the Championship last season and a record for Jonny Cocker with the car that sees him never having finished off the podium when driving it.

The JMW car then scored the first ever international race win for a 458 GTE at Paul Ricard in 2011 and very likely the last here at Monza over six years later!

The TF Sport Aston Martin mounted a charge to challenge in the second half of the race with Nicki Thiim and then Euan Hankey looking set to catch the 458 until the closing stages saw the charge falter.

Third went to the defending champions after a relatively quiet race for the #99 Beechdean AMR team, only 30 seconds down to the other Vantage at the flag though.

Fernando Rees had the #50 Corvette in the mix in the early stages despite a spin in response to the AT/ United Ligier clash ahead of him, his tam-mates though could not match his pace and the Vette tumbled down the order as the other GTE teams fielded their Pro talents.

The #51 Spirit of Race Ferrari too had a quiet one, Bertolini climbing the order but a penalty seemed to take the heart out of the effort, fourth a fair enough finish in the end.