Felipe Nasr has emerged as the fastest driver of the 2018 IMSA Roar Before The Rolex 24, the Brazilian setting a 1:35.806 on Sunday, building on his Saturday performance in the #31 Whelen Engineering Action Express Cadillac DPi V.R, to lead the field, beating the track record (unofficially) in the process.

As well as topping the Roar Before The 24 time sheets, Nasr’s lap also secured the Action Express crew top spot in the Qualifying session, which decided the pit and garage locations for the teams for the big race later this month.

“I wanted to be back here in IMSA and finally I am here,” Nasr said. “The team is really focused on the race. We all feel very confident in the car. Today in the qualifying session, we gave everything we had and finished first.

“The cars at the front are very close in time. I am pretty happy with the way the Cadillac is performing. When I ran here in 2012 it was one of the best experiences of my career. The IMSA championship is growing. There is such a strong field here, it is great for a racing driver to be competing at Daytona. I got a third place here, and now I want to go for the win.”

Nasr’s effort put the Whelen Cadillac 0.231 ahead of the rest of the Prototype class pack after three days of running at Daytona. Second on the list was Tristan Vautier in the #90 Spirit of Daytona Racing Cadillac, who set a 1:36.037, also during the Qualifying session. 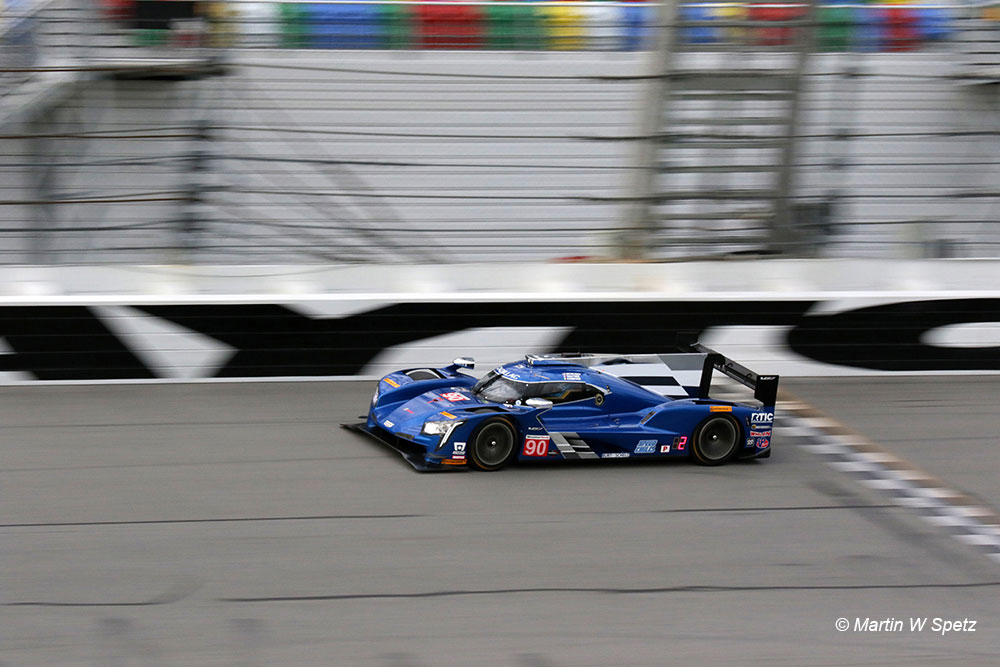 “Our pace was good,” Vautier said. “I think it is a strong statement by the team how good we have run. Receiving the car in December, getting it on the ground about a week ago and to come here and show how strong we are is great. We took this as a good practice for the Rolex 24. I gave it all I had. Everyone in the Cadillac camp pushed hard. The team has really been hustling for two months. We have some time to get ready for the race now.”

As it was at the end of both Friday and Saturday, Sunday’s action also concluded with a Cadillac 1-2-3-4 in the combined time sheets. Third in the running was the Mustang Sampling Action Express DPi V.R of Filipe Albuquerque with a 1:36.135, ahead of the Wayne Taylor Racing example, which had its best tour set by team newcomer Renger Van Der Zande. Both drivers’ times were also set in Qualifying.

In the end, the best of the rest accolade went to the #6 Acura Team Penske ARX 07 in fifth, ex-Action Express driver Dane Cameron setting a 1:36.988 on Sunday to put the team just over a second off Nasr’s best. The sister #7 ARX 07 ended up sixth, Jordan Taylor a couple of tenths further adrift.

Further back, the #22 ESM Nissan ended up seventh, with the #55 Mazda Team Joest RT24P eighth, the two DPis 1.4 seconds off the best time. The fastest LMP2 machine was the #79 Jackie Chan DC Racing ORECA in ninth, Alex Brundle the quickest in the team’s 07 Gibson.

In the GTLM division, the #66 Chip Ganassi Racing Ford GT held station at the top by the end of the weekend, as it did by close of play on Saturday, though its time had improved, Joey Hand setting a 1:43.610 in Qualifying. 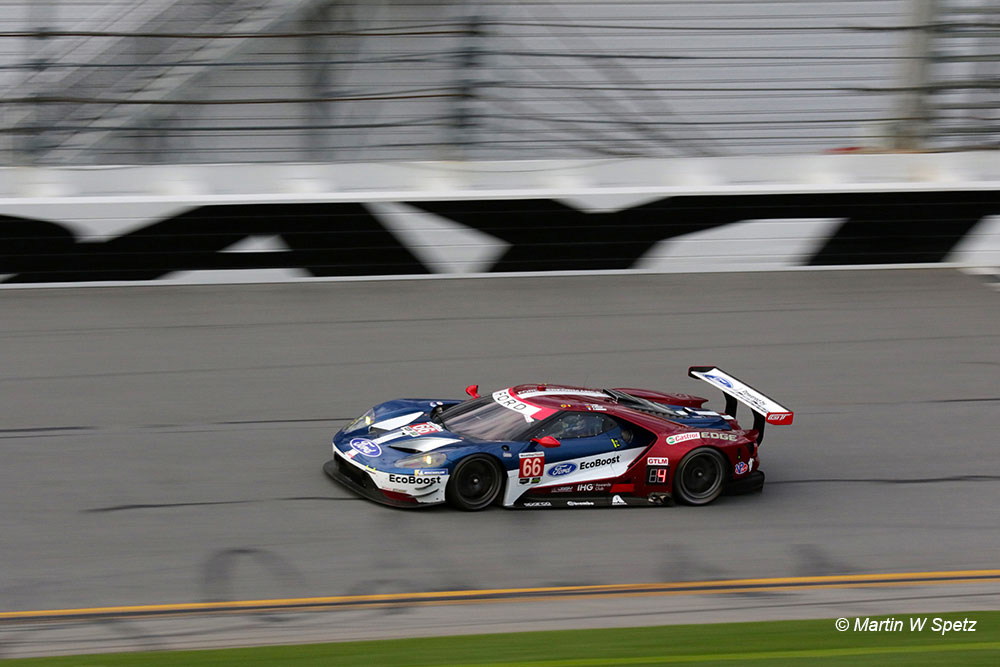 “We went for it. We struggled with our balance of the car a little bit this weekend from the December test. We really liked it. Dirk and Seabass (Sebastien Bourdais) and I were just bouncing it all weekend. We got it closer this morning, we think maybe it’s the temperature, and we made a change right between the practice and qualifying.

“We wanted to see how aggressive we could get. It was a better car, but it still needs to be a better race car. We’re happy with the progress. To finish out the Roar, I think we’re OK looking to come back.

“You never know what temperature you’re going to get when you come back, so you don’t want to really tune too much here, but you do want to learn some things that are right and wrong, but yeah, I’ll take it.

“Somebody’s got to do it, so I guess I can handle it.”

His time was just 0.030 quicker than the #4 Corvette C7.R which slotted in second courtesy of Oliver Gavin. As well as it being tight between the top two, the class as a whole was also close on pace,  the top six within half a second of one another after the seven sessions ended.

Completing the top three was the #67 Ford GT of Ryan Briscoe, ahead of the #912 Porsche which ended up missing out on a top three spot by just a tenth.

Of the other brands in the GTLM class, Risi’s Ferrari ended up sixth, with while the two BMW Team RLL M8 GTLMs ended up at the back of the pack in eighth and ninth.

While GTLM and Prototype saw the selection of fastest times from Friday and Saturday bested on Sunday, GTD was still headed by times set in the opening two days by the end of Sunday.

Rolf Ineichen’s 1:47.104 in the #11 Grasser Racing Lamborghini Huracan from the opening session on Friday was still enough to keep the car top. Likewise, Matteo Cairoli’s 1:47.125 from Session 3 in the #59 Manthey Porsche was good enough for second, and Max Van Splunteren’s early 1:47.364 from Friday in the sister #19 GRT Lambo was still competitive enough for third. 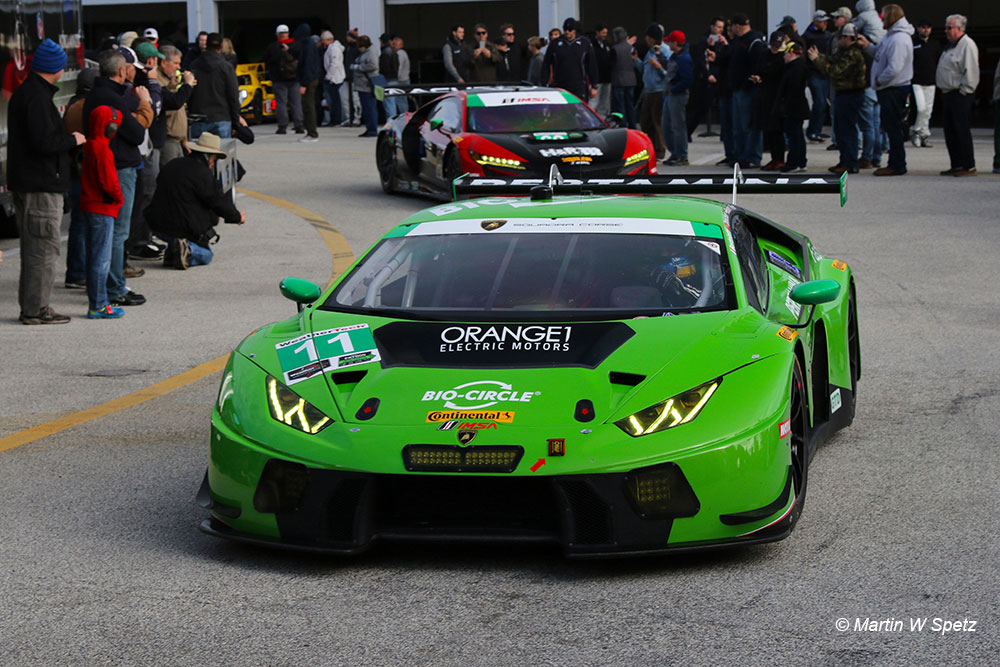 Rounding out the top five in the class was eventually the #29 Land Motorsport Audi in fourth, less than a tenth quicker than the #92 Michael Shank Racing Acura NSX GT3 which finished the weekend fifth.

While fifth overall may sound like a positive, Michael Shank driver Lawson Aschenbach left the test weekend feeling that more pace could have been unlocked from the car, especially for the 15-minute qualifying session, in which the #93 could only manage 12th in class.

“We lost the balance a little bit from the first session, so that wasn’t really the time I think we were capable of today,” said Aschenbach.

“The car just never really came to us like it had been the rest of the weekend. The Acura NSX GT3 is still pretty quick and Alvaro (Parente in the sister car) put down a really good lap in for fourth. Now we will just need to look at data and see where things changed, and we will be fine for the race, I’m not too worried.”

Making up the top five where the GRT’s #11 Lamborghini which ended up quickest, ahead of the #44 Magnus Racing Audi, #58 Wright Motorsports Porsche, #86 Michael Shank Acura and #69 HART Acura. It was a tight session, which saw the top 18 cars in the class covered by less than a second.

Next for the IMSA WeatherTech SportsCar Championship teams is the Rolex 24 Hours at Daytona itself, the meeting running from January 25-28.