In Part 1 of DSC’s extensive preview of the 2018 Rolex 24 Hours at Daytona, we covered the bumper 20-car Prototype entry, Part 2, looks at the GTLM division.

This year, as it has been the past few, it’s a relatively small but hugely high quality field, with nine cars an multiple GTE marques represented. Ford, Ferrari, Porsche and BMW have cars and will likely battle from Lap 1 until the flag, Daytona always finding a way to ensure that multiple cars are still on the lead lap in the final hour (last year seven GTLM cars finished on the lead lap).

Here’s a look at the GTLM runners, marque by marque:

As ever, the Pratt & Miller run Corvette Racing squad bring a pair of cars to the big race. This year’s Rolex, looks to be the final one for the C7.R, the car due to be replaced in 2019 by a brand new model. The whole team will be hoping for its final dance at Daytona to be a memorable one, similar to that of the 2016 running of the race when it finished 1-2 after a thrilling on-track battle to the flag. 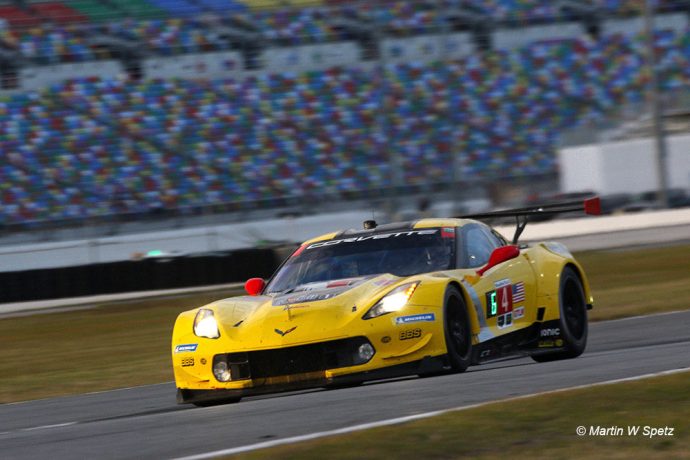 This year, the team brings back its four full-season drivers, Jan Magunessen, Antonio Garcia, Oliver Gavin and Tommy Milner, who are all capable of winning, with ex Audi LMP1 drivers Mike Rockenfeller and Marcel Fassler again joining them for the race in Florida.

The car is still capable in both sprint races, and long distance encounters, Garcia and Magnussen’s #3 car going on to win the class title after taking wins at Sebring, CoTA and VIR. The question is, as the oldest car in the class, whether or not this will be the year it loses its edge.

Either way, they’ll be in the fight, and as usual, a favourite to win.

Out of the five manufacturers in GTLM, BMW Team RLL will likely receive most of the media and fan attention, certainly in the build-up to the race, as the debut of its M8 GTLM looms large. 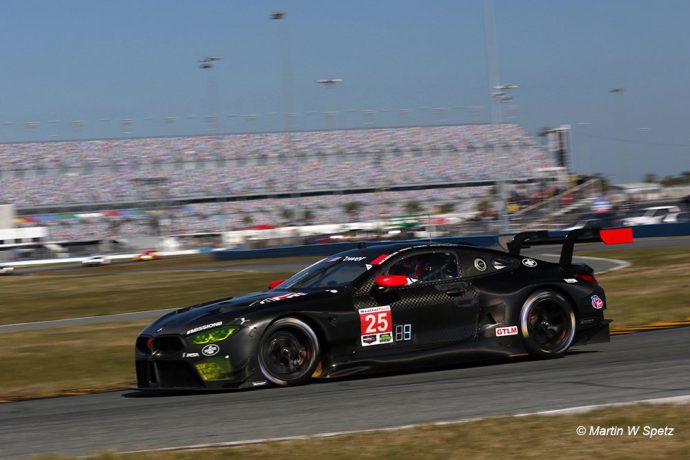 For the first time since the M3 GT2, BMW has designed a car which will race in both IMSA and the WEC, and Daytona, is the site of its first race.

The car has been out testing extensively since its initial run mid-way through last year, the Bavarian brand hoping it’ll be both reliable and competitive out of the gate. The car didn’t have the easiest of inceptions, after a forced re-design late on cost the team months of work, but nevertheless, the car has still managed to get in plenty of running over the winter, book-ended by 215 laps combined at the Roar.

Speaking of the Roar Before the 24, the car proved to be the slowest of the GTLM machinery, however, it’s testing, it’s a new car, it’s a performance balanced formula (and after the Roar it got a significant turbo boost increase and a 10kg weight decrease) and therefore, it means very little at this stage.

In terms of driving talent, there has been some changes in camp BMW.

In its #24 M8, Augusto Farfus returns (after competing only at Daytona last year), and will drive with brand stalwart John Edwards, Jesse Krohn who’s stepping up from GTD and Nicky Catsburg.

And in the #25, Alex Sims returns for another year of GTLM action, along with, veteran driver Bill Auberlen, IMSA debutant (and 2018 BMW DTM driver) Phillip Eng and BMW newcomer Connor De Phillippi, who moves over from Audi after winning the 2017 N24 and 2016 ADAC GT title.

Both driver crews provide a good mix of youth and experience, who if the car is up to the task, could challenge for a good result.

But this race is all about the M8, in a field of proven machinery, how will it fare?

It’s hard to believe that 2018 is the third season of the Ford GT. The car, which still feels new, returns to Daytona this year with the aim of defending its Rolex 24 crown after winning the 2017 race. 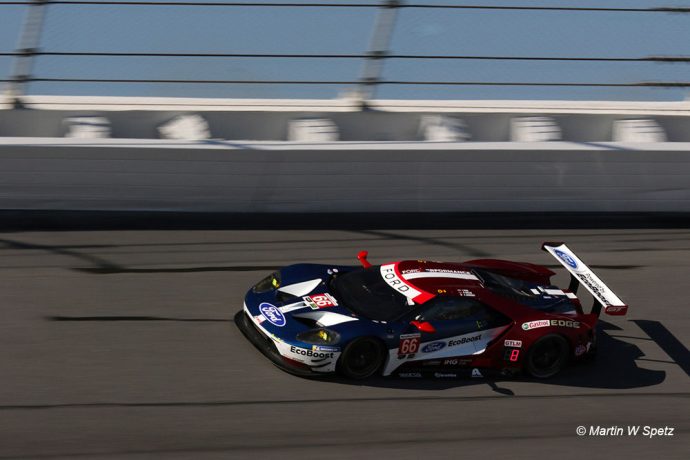 The ‘Blue Oval’ has scaled back its Daytona effort this year, after running four cars last year. But that’s no reason to think that Ford is any less motivated to win.

Like Corvette, Ford has consistency in its driver crew, bringing the six IMSA drivers it used in 2017 to this year’s edition. And it’s impossible to pick between the two crews, Joey Hand, Dirk Muller and Sebastien Bourdais in the #66 just as quality as Ryan Briscoe, Richard Westbrook and Scott Dixon in the #67.

The only real change is the colour scheme of the cars, which is still blue, white and red, but different shades to reflect the shades available for the road car.

At the Roar Ford ran fastest, Joey Hand topping GTLM with a 1:43.610 in Qualifying to put the #66 top. Will that form translate into the race though?

Back for its second year of competition, the Porsche 911 RSR means business. 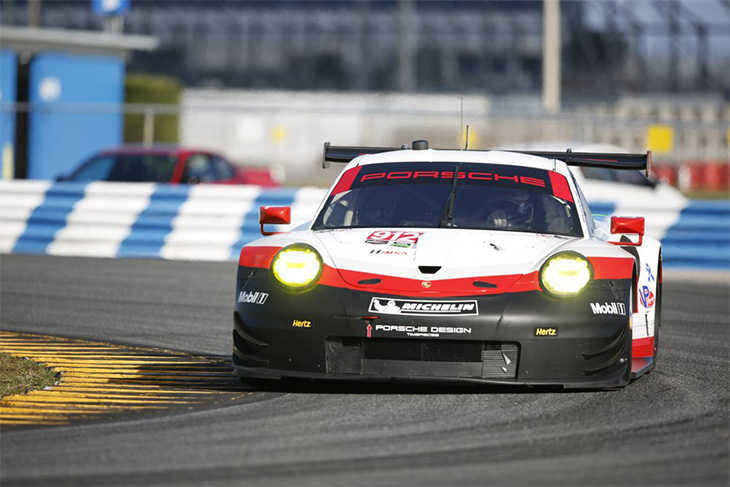 Last year in the WEC, the car failed to win a race, but stayed consistent enough to challenge for the title, while in IMSA, the car scored its debut win at Lime Rock, en route to the NAEC title for Patrick Pilet and Dirk Werner.

With the car now refined, reliable, and fast after teething troubles early last year, what better way to kick off 2018 than with its first big win?

For its 2018 campaign, Porsche GT Team will race with a revised line-up, but one that is more than capable of fighting with the best.

The big news in its roster is the inclusion of ex-Porsche LMP1 drivers Earl Bamber and Nick Tandy, who return to full-time GTE competition this year. For Bamber, he’ll race with the formidable duo of Laurens Vanthoor and Gianmaria Bruni, while Tandy – who is motivated, and chose IMSA GTLM over WEC GTE Pro – will race with Patrick Pilet once again, and Frederic Makowiecki, who’s in for the long races.

This is a very serious effort, and Daytona will make for valuable practice for the CORE autosport guys behind the scenes running the effort, with its first trip to Le Mans just months away.

It’s always odd seeing a GT entry without AF Corse (or its Spirit of Race label), but nevertheless, Ferrari is still in the running, Risi Competizione representing the ‘Prancing Horse’. 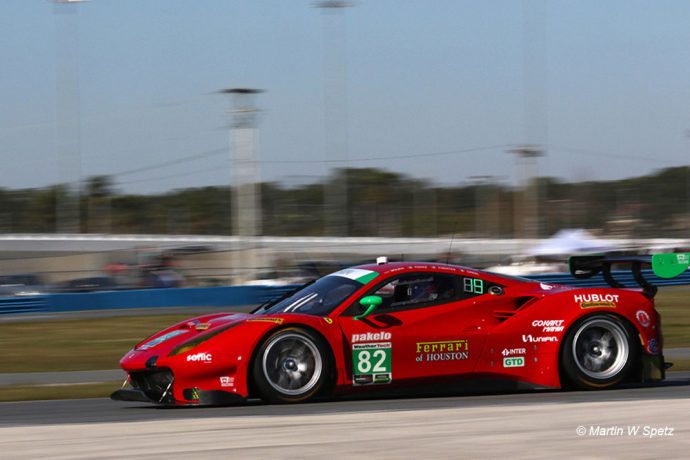 A fan favourite, and the only privateer effort in the class, Risi should never be underestimated. Coming off a tough 2017 season, in which its IMSA campaign was shortened and its Le Mans bid ended in the wall after an unfortunate tangle with TDS’ ORECA, this trip to Daytona will be of upmost importance.

For its GTLM 488, it’ll race with four factory drivers, three of which, raced with it in 2017. Returning are Toni Vilander, and 2017 GTE Pro world champions James Calado and Alessandro Pier Guidi. The fourth piece to the puzzle is a late addition, AF Corse WEC driver Davide Rigon, making this one of the strongest sets of drivers ever to compete in a GTE/GTLM Ferrari.

Like the other makes, with such an incredible collection of talent, and its key personnel behind the scenes, Ferrari has a real chance here to take the win. The only thing it lacks is strength in numbers

At this point, it’s impossible to pick a winner, let alone separating the favourites. So just sit back, relax, and enjoy this one.