Drama for the #11 SMP Racing BR1, Petrov into the garage, rear deck off the car, laptops plugged in, car plummeting down the order, dead last by the 70 minute mark, Jenson Button’s Le Mans not looking very fairytale this year! 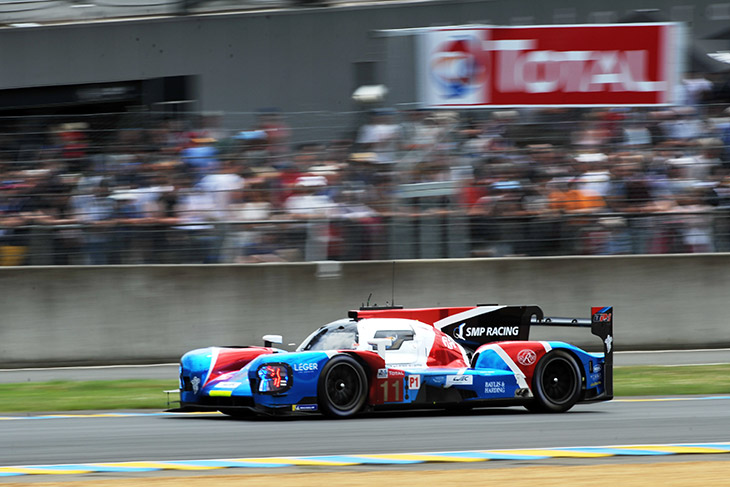 And minor drama too for the #8 Toyota, a rear clip change in an out of sequence stop, the car rapidly on its way after a 64 second stop, the change a precaution after the contact at the start from the #1 Rebellion. This an early example of the rather conservative approach we are likely to see from Toyota if and when they have the opportunity to deploy it. The #8 though was back through to the lead after the next routine stop for the #7. 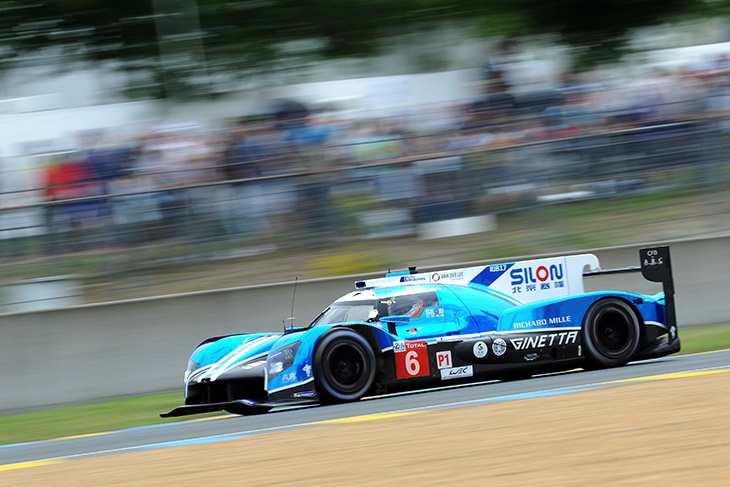 The #6 Ginetta meanwhile was dealt a stop/go for Alex Brundle spinning the wheels as he exited after the previous stop, Brundle Jr’s teenage habits in the local Morrisons car park catching him out.

90 minutes in and only two of the non-hybrid LMP1s have had no real delays, the 3rd and 4th placed #3 Rebellion and #17 SMP BR1, both though are half a lap back from the charging Toyotas.

15 minutes before the hour and the #11 SMP Racing car was back out for a single lap after 40 minutes in the garage then back in again.

The final 20 minutes of the hour were spent with a long slow zone stretching from Mulsanne Corner to Arnage after an incident (see below) for the #86 Gulf Porsche.

The Toyotas led, 1,2 for #7 and #8 at the top of Hour 2, Laurent meanwhile was pulling away from Sarrazin in thirdwith Ben Hanley in the #10 Dragonspeed BR1 the only other unlapped car.

The #31 Dragonspeed ORECA with Nathanaêl Berthon behind the wheel had to crawl back to the pits after shedding its front right wheel between Indianapolis and Arnage. He was able to bring his car back to the pits. Curiously the wheel left the car after 2.5 laps after the pitstop.

The team fitted a new hub to the car, losing 3 laps.

Otherwise, the field completed its second round of pitstops, largely without drama.

Duval was pushing hard, but not succeeding, in catching Vergne.

100 minutes in and trouble for the #38 Jackie Chan DC ORECA, Ho Pin Tung with a puncture – a 9 minute lap before pitting but then soon released, seemingly a great job bringing the car back with no further damage. 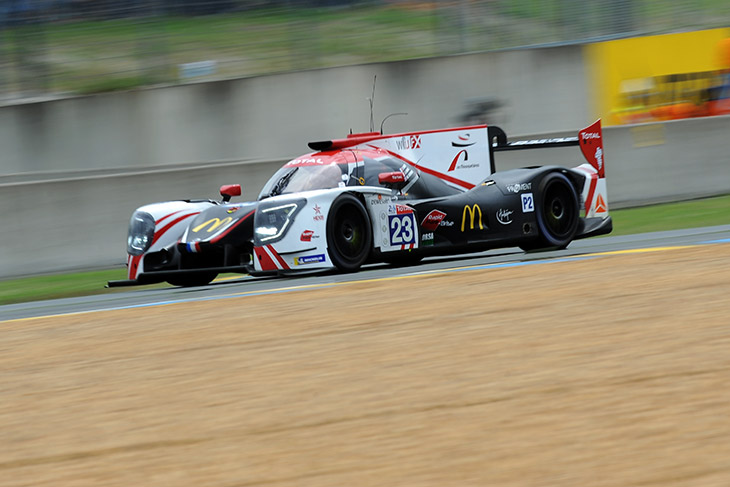 Looming in fourth position in LMP2 was Will Stevens, the #23 Panis Barthez man best of the non-Orecas in the Michelin-shod JS P217.

Tracy Krohn meanwhile was dealt a drive through penalty after being adjudged to have constantly exceeded track limits in the #44 Eurasia Ligier.

Top of the hour and Vergne in the #26 G-Drive ORECA led the class almost a minute clear from Duval in the #28 TDS ORECA. 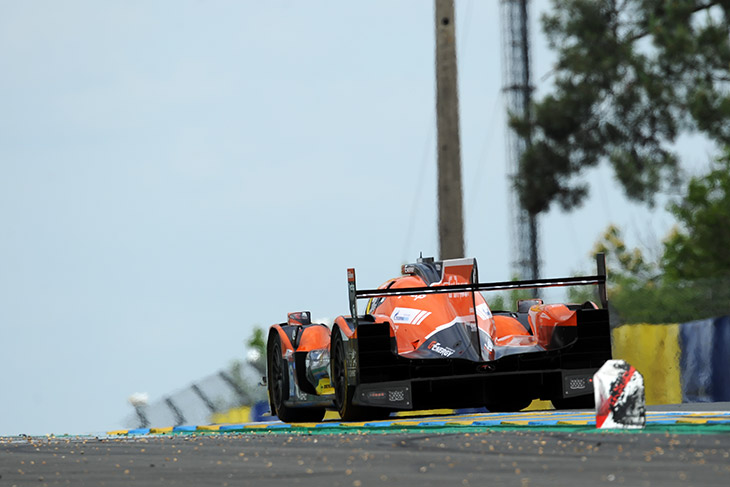 Third was the #36 Signatech Alpine, Negrao now at the wheel with Will Stephens still fourth in the #23 Panis Barthez Ligier.

Through into the second hour of the race, and with 15 laps completed, Christensen’s #92 Porsche led, but Dirk Müller had got out ahead of Bruni in the pits and the #68 Ford was starting to reel in the leader.

Showing an improved turn of speed, Antonio Garcia’s #63 Corvette passed Stefan Mücke’s #66 Ford GT on the Mulsanne Straight for sixth. That brought Mücke under pressure from a hustling Alex Sims in the #82 BMW, the #66 slipping down another slot.

The young British driver then out-braked Garcia’s Corvette into Mulsanne Corner and snatched seventh, the BMW clearly on a charge. By the end of lap 18 the BMW had disposed of both Mücke and Pilet, in the #93 Porsche, and was running fourth, 11 seconds behind Bruni’s third-placed Porsche. Fourth to twelfth in class were now line astern.

All this action brought Müller within reach of the leader, and the Ford GT was now filling Christensen’s mirrors. The German was shaving tenths off the leaders advantage with almost every lap, and the two were trading times in the low 3:52’s.

A little further back, Andy Priaulx was having a great duel with James Calado’s #51 Ferrari, the #67 Ford battling for eighth. The two Brits, trading times, were followed by the ‘rear guard’ #69 Ford of Ryan Briscoe, who had Martin Tomczyk the #81 BMW closing in from behind, tenth and eleventh.

Twenty-two laps in and James Calado’s Ferrari was seen moving slowly down the Mulsanne with a puncture, having been forced to dive wide between the tyres and take the cut-through at the second chicane when the tyre blew.

Dirk Müller inherited the lead for the #68 Ford two laps later, as the GTE-Pro field started a second round of pitstops. Christensen handed over the #92 pink Porsche to Laurens Vanthoor, who regained the lead as soon as the second tranche of the Pro field took its turn at the fuel pumps. 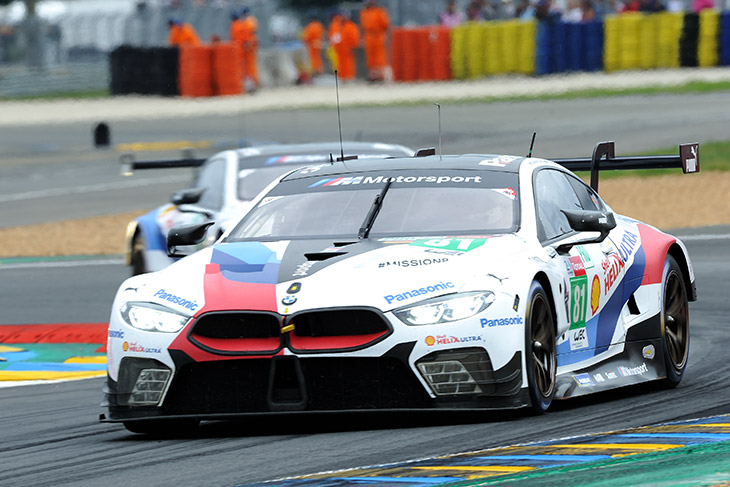 With 27 laps completed, the order stood at Porsche, Ford, Porsche, Ford at the front, but looming large in Olivier Pla’s mirrors, and challenging hard for fourth place, was Antonio Felix Da Costa’s #82 BMW. The big German car was posting good sector times in the hands of the Portuguese driver.

Car #64, which had been struggling a bit in recent laps, was in the Corvette pit receiving attention to its suspension.

Just before the end of the hour, Fred Makowiecki had the #91 Porsche side-by-side with Sébastien Bourdais’ Ford #68 into the Mulsanne Corner; the #91 getting past to re-establish a Porsche 1-2 at the head of GTE Pro.

If there was chop-and-change in GTE Pro., it was all a little more settled in Am. The top ten circulated in the order in which they’d left the pits after the first set of pitstops, although leader Ben Barker was out of sync with the rest.

It transpired that his early stop had been prompted by a slow puncture, probably the result of going offline, but Ben Barker reported that the car felt good and that the hope was to adjust strategy as the race progressed.

Having stopped that first time, ahead of the pack, Barker’s handover to Mike Wainwright also came early, and the car dropped down to eleventh, although if all went to plan, these positions would be reclaimed when the rest of the GTE Ams pitted on schedule.

Fisichella was now settling in at the front of the class, the Spirit of Race Ferrari #54 holding the lead, but Cairoli was very much in touch for Dempsey Proton, the #88 Porsche just over half a second behind. 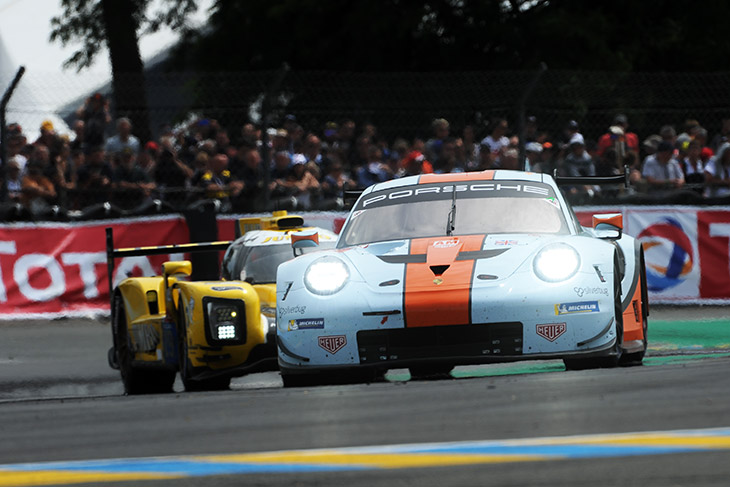 Then first serious drama to befall a key player in GTE Am came on lap 26, then Mike Wainright found the tyre wall at Indianapolis in the #86 Gulf Porsche. He appeared to lose the car under braking, and the Porsche rotated wildly, clattering along the Armco on the car’s left hand side. The 911 sustained damage to just about every corner, as it came to rest, nose-first, into the tyre wall on the outside of the left-hander. This incident appeared remarkably similar to Sven Muller’s (#94 Porsche) sustained during qualifying, the Gulf Racing car looking like it would need significant work. A slow zone was enforced as the car was recovered and the Armco repaired.

Thomas Flohr, now aboard the lead #54 Ferrari, the Spirit of Race F488, was now among the Pro cars for overall position and held a gap of over 40 seconds on the JMW Motorsport Ferrari, running second in the hands of Cooper MacNeil, the pair of Dempsey-Proton Porsches strung out behind, #77 narrowly ahead of #88.

Racing resumed just before the end of the second hour.