The stars of the SRO Motorsports Group championships were on hand last Sunday in London at Old Billingsgate Grand Hall for the organiser’s annual awards ceremony, marking the end of it’s 2018 season.

From the Blancpain GT paddock, Raffaele Marciello and AKKA ASP took home the most coveted prizes of the evening, winning the overall Blancpain GT drivers’ and teams’ titles after sharing a remarkable year with their Mercedes-AMG.

It represented a first major honour at this level for both, with the Italian triumphing in only his second season of GT racing and Jerome Policand’s squad establishing itself as a major player in GT3 racing

“I think I can be really satisfied with this season,” said Marciello. “After the summer break we showed that we were able to win and be the most consistent. It’s an honour to work with Jerome [Policand] because he is so passionate about motorsport and AKKA ASP is a big family, so I am very proud to win with them.

“I am also grateful to Mercedes-AMG. They took me on after my single-seater career and I am very happy working with them. The season has just finished, but already I can’t wait to be back on track!”

There were further awards for the class champions who triumphed in 2018. In the Silver Cup category, the overall and Sprint Cup titles went to Nico Bastian and Jack Manchester (AKKA ASP Mercedes-AMG) after an impressively consistent showing across the campaign. In the Endurance Cup, Silver honours were awarded to the #54 Emil Frey Jaguar crew of Alex Fontana, Adrian Zaugg and Mikael Grenier.

Pro-Am also saw one crew scoop both the overall and Sprint Cup titles. Markus Winkelhock and Nyls Stievenart received their rewards, while the Sainteloc Racing Audi squad for which they drove took home the teams’ trophy.

In the Endurance Cup, drivers’ honours went to the Strakka Racing after its breakout first season racing with Mercedes-AMG, its trio of Nick Leventis, Chris Buncombe and Lewis Williamson the victors, while AF Corse took home the teams’ title.

Finally, Am Cup honours for the overall and Endurance Cup championships went to Barwell Motorsport and its pairing of Adrian Amstutz and Leo Machitski.

In addition to that, for a third time, the Sean Edwards Trophy, awarded to a driver under the age of 21 who has shown outstanding attributes during the season, was handed out. This year it was presented to South African racer Sheldon van der Linde, whose campaign was highlighted by an exceptional third-place overall finish at the Total 24 Hours of Spa.

Among the other key champions crowned that night, were the top performers from British GT, Intercontinental GT Challenge and Blancpain GT Series Asia.

It was a big night for Optimum Motorsport duo Flick Haigh (named Blancpain Driver of the Year) and Jonny Adam, who were on hand to collect the British GT3 Drivers’ Championship trophies following their history-making campaign in the senior class, while Derek Johnston accepted the Teams’ title award on behalf of TF Sport. 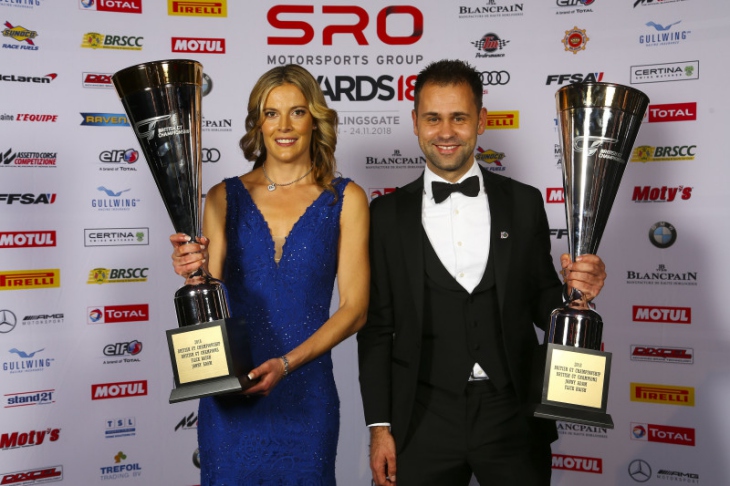 There was also no shortage of prizes for Century Motorsport and Jack Mitchell too. They claimed the GT4 Teams’, Drivers’ and Silver Cup championships and were joined on stage by Pro/Am class winners Nick Jones and Scott Malvern (Team Parker Racing).

As part of the British GT contingent, AMR factory star Nicki Thiim was named the sixth winner of the Allan Simonsen Award, traditionally won by a driver with the same speed and spirit that epitomised Simonsen, who tragically lost his life at the Le Mans 24 Hours in 2013. 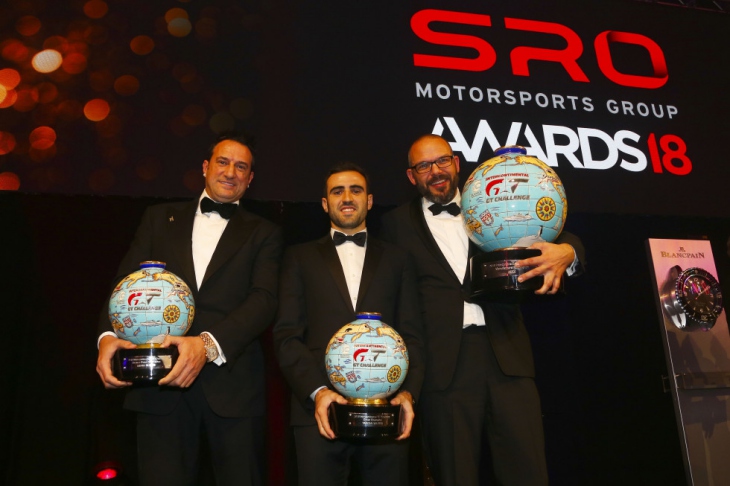 “This title is probably the most important accomplishment of my career,” said Vautier. “But although I am the one to receive the trophy, this is a reward for many teams and drivers. I’ve driven for four teams in the 2018 campaign, had eight co-drivers, and I have to thank them all. Just like this would not have been possible without the support of the people at Mercedes-AMG.

“I am also very happy that my good friend Kenny Habul has taken the Bronze drivers’ title. We both love the trophies, this is by far the most beautiful trophy I have ever received. The biggest stress of the season came when I had to try and take it home in one piece!”

And lastly, the 2018 Blancpain GT Series Asia champions were united in London on Saturday evening to receive their 2018 trophies alongside title winners.

KCMG’s Am Cup champions Takuya Shirasaka and Naoto Takeda flew in from Japan to be presented with their awards while Reinhold Renger (GruppeM Racing) picked up the GT4 Drivers’ Championship trophy.

“Firstly, I must offer my congratulations to all of those who were recognised this evening. Our series grow more competitive by the year and so to be crowned champion is a tremendous achievement. This awards ceremony is the perfect way in which to conclude a year of hard work and celebrate the successes of our competitors,” said SRO founder and CEO Stephane Ratel.

“I am grateful to everyone who has been a part of our championships in 2018. We have seen great developments in many areas and it is thanks to the involvement of such high-quality participants that we never stop improving. I wish everyone an enjoyable winter break and look forward to another fantastic year in 2019.”