Testing at Monza yesterday saw one dry session (Morning) and one (very) wet session (Afternoon for the ELMS cars, plus a single wet then drying session for the Michelin Le Mans Cup contenders).

It saw though a significant accident that has left a much-loved member of the ELMS family in hospital.

37 of the 42 cars for this weekend’s ELMS race were registered for the test though only 36 ran.

The top five fastest in the session were all ORECAs with three Michelin runners and a single Dunlop-shod car.  Nicolas Lapierre topped the times – 1:36.183 in the Cool Racing car with Paul Loup Chatin in the #28 IDEC Sport ORECA just under a tenth off and Jonathan Hirschi in the #39 Graff 07 half a tenth further back.

The  fastest Dunlop runner was Anders Fjordbach in the High Class Racing car with Renger van der Zande fifth ahead of a pair of Ligiers, the Michelin-shod #22 United Autosports car of Filipe Albuquerque and then the #23 Panis Barthez machine of Will Stevens.

LMP3 saw a top six dominated by Normas, Matthieu Lahaye putting the #1 Ultimate car fastest, the only man into the 1:44s – 1:44.973, Nielsen racing’s Colin Noble next up followed by Wayne Boyd in the quickest of the Ligiers, the United #2 JS P3, David Droux in the #9 Realteam Racing Norma and Christian Olsen in the #15 RLR MSport Ligier.

The afternoon session saw heavy rain spoil the running for most, and saw too a couple of significant accidents.

John Farano had a shunt in the #43 RLR MSport ORECA that has got the team prepping new front and rear bodywork today.

Much more serious though was an accident into the first chicane involving Algarve Pro Racing’s Mark Patterson, the South African testing in the #25 ORECA 07, the car broke away at the rear, spinning to the infield and across the track where it hit the sister #31 ORECA – rear of #25 against drivers right side front of the #25 – with Tacksung Kim aboard.

Both drivers suffered injuries – Mark is in a local Milan hospital with an injury to his hip and looks set to be out of racing for some time. We. of course wish him all the best for a very rapid recovery.  Kim thought initially that he might have fractures in his hand but that seems to have emerged as heavy bruising.

The #31 chassis, new to the team at the end of last season is a write-off, the team acquiring an ex Graff chassis overnight and building up the car today. The #25 car is repairable here. 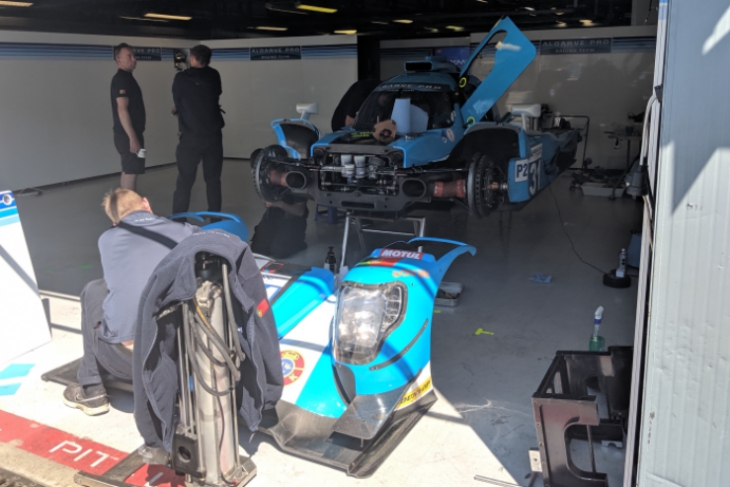 The #25 is confirmed as racing this weekend with a two-man crew of John Falb and Andrea Pizzitola.

After that little lot, the times seem immaterial but Arjun Maini deserves plaudits for setting the fastest time of the session in the #43 before its incident.

Colin Noble topped the LMP3 times with some very impressive running in the #7 Nielsen Racing Norma, the young Scot also topped the Le Mans Cup session in the wet, his times only surpassed as the track dried and Duncan Tappy bettered the mark.