Amongst the issues still under discussion ahead of the final announcement of the Hypercar regulations due on Friday, is the issue of how much hybrid drive will be managed and balanced against cars in the same class without electrical boost.

The debate surrounds the speed at which the hybrid boost will be allowed to be deployed, effectively a measure designed to assist some balance between hybrid and non-hybrid cars, and in an area where the current EoT process has no real chance of balancing the performance characteristics of the Hybrid and non-hybrid LMP1s.

There is understood to be a particular debate on the parameters which would apply to the hybrid delivery on a wet track, with the speed at which hybrid drive could be deployed in those circumstances likely to be above 120 km/h.

Rebellion looking to the future

Rebellion Racing, whilst focusing on its current programmes, and working hard on completing its full two-car package for 2019/20, is looking to stay in the top class of endurance racing for the longer term. 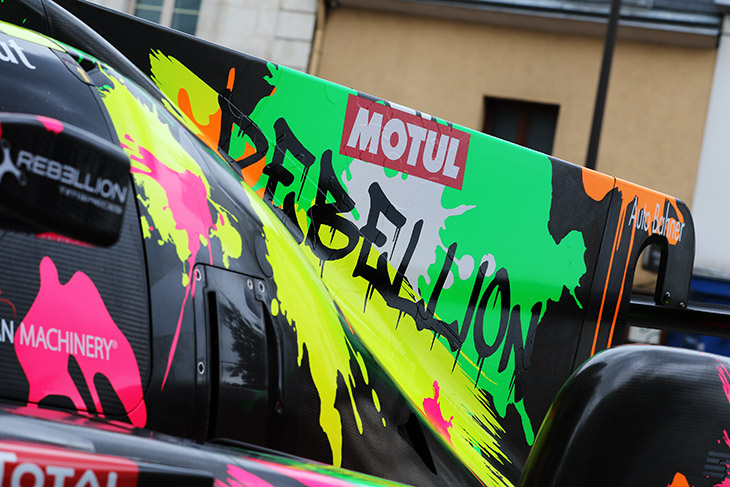 Rebellion’s Callim Bouhadra told DSC: “We have a fine tradition in endurance racing, and a great record here at Le Mans even against amazing opposition, we think it remains a great fit for our brand.”

Neel Jani told DSC he feels that Rebellion Racing has no chance to challenge Toyota for Pole Position at Le Mans this year. 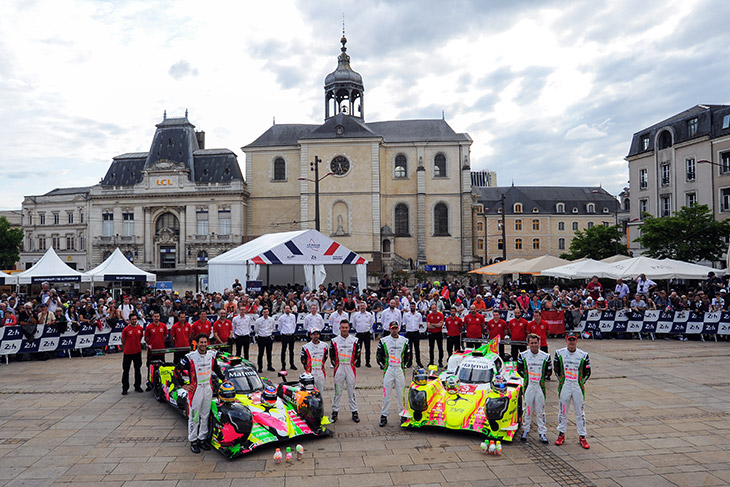 The Swiss team returns to Le Mans in 2019 with its R-13s running a new low-drag kit. While he says the new aero is an improvement after running at the Test Day, it won’t be enough for Rebellion to challenge the TS050 HYBRIDs on raw pace.

“Testing wasn’t bad in the end,” he said. “The new kit is a good improvement from last year. But is it enough? It’s not enough to beat Toyota. But SMP seems strong so we’ll see. It’s not clear that we’re the first team behind Toyota now.

“Pole position will be impossible.

“It’s been mixed feelings for my season. We’ve had bad luck with our car, so many times. It’s been a bad season but we’ll be hoping our luck turns around here.

“Toyota will be up front, and they can beat themselves, hopefully. That’s our only chance. Between us and SMP it will be a hard fight, but SMP will decide this race.”

Jani moving on from WEC, but wants to return

Rebellion Racing’s Neel Jani also said to DSC he hopes to return to the FIA WEC in the future. He won’t be back for the 2019/20 season due to his incoming Formula E commitments with Porsche. 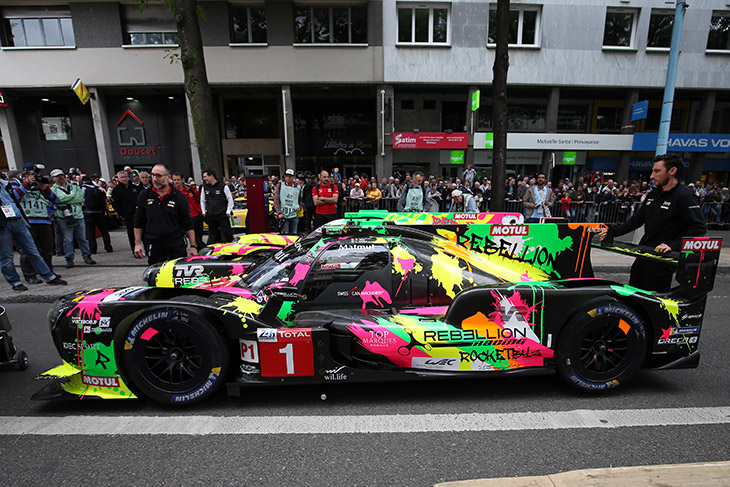 “For Rebellion I don’t know their plans,” he said to DSC. “For me, I know that this is my last Le Mans for the moment. I’m working with Porsche on its Formula E project, and it doesn’t work doing the WEC as well from my point of view.

“But I hope I’m back when the new rules kick in at some stage. I’m not sure about Porsche’s thoughts on Hypercar, but I’m hearing about Aston Martin, if it works I’m sure they will attract new manufacturers to the top class.”

Switching from Rebellion to Toyota’s test and reserve driver role next season is Thomas Laurent (a young man who, incidentally has a 100% record of finishes on the overall Le Mans podium!), and he looks set to have quite a year. He’ll be mixing simulator and test driver duties, potentially including the testing of the new ‘Hypercar’.

This new role means he will not be driving for Rebellion in the WEC, but he is hotly tipped to replace the departing Nico Lapierre at Signatech Alpine in LMP2 for at least a partial season programme, whilst also likely to get at least one race outing in the full factory LMP1 team during the season DSC understands.

Japan’s First FIA World Champion will be crowned on Sunday

Regardless of Sunday’s race result, it will be the first time a Japanese driver [K.Kobayashi or K.Nakajima] clinches an FIA World Championship.

“For the moment, we [the drivers of the #7 Toyota] stand less chance [of winning this title]” said Kobayashi. “In the end, I think winning Le Mans is much more important than winning the championship.”

Kazuki Nakajima meanwhile told the DSC Editor that in his mind, after having taken the long-awaited first Toyota win at Le Mans last year, that the World Championship was now his primary objective.

Larbre not returning to the WEC?

DSC now believes, despite a firm ‘no comment’ from Larbre Competition Team Principal Jack Leconte, that the French LMP2 team will not, after all, feature on the full season FIA WEC entry list in 2019/20. 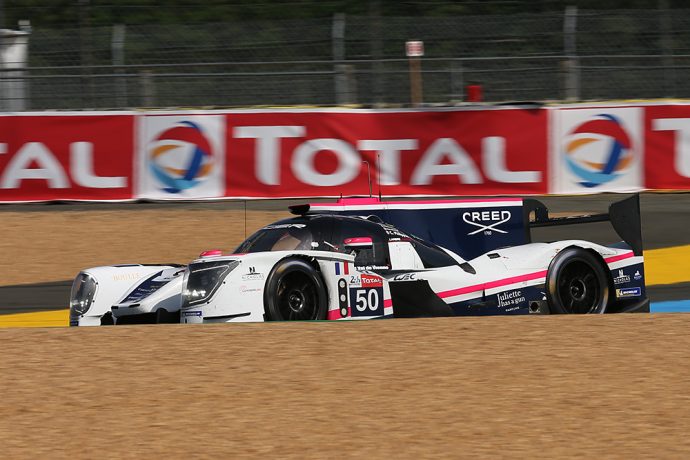 He later though shared some forthright views thoughts about the future set of regulations: “I have stopped thinking about it. I believe that the organizers have a hard time finding their way. We’ll let them work but 2021 is coming fast. If we were managing our businesses the way they manage theirs, then I believe it would be catastrophic. It does not give me much confidence”.

Expect though to see at least one, and possibly more additional teams join the full-season WEC LMP2 roster after last-minute deals were struck. More details tomorrow.  ..

Taylor: “This is my best chance to win LMP2 at Le Mans”

DSC caught up with Ricky Taylor earlier today, who is competing at Le Mans this year with Jackie Chan DC Racing in LMP2. 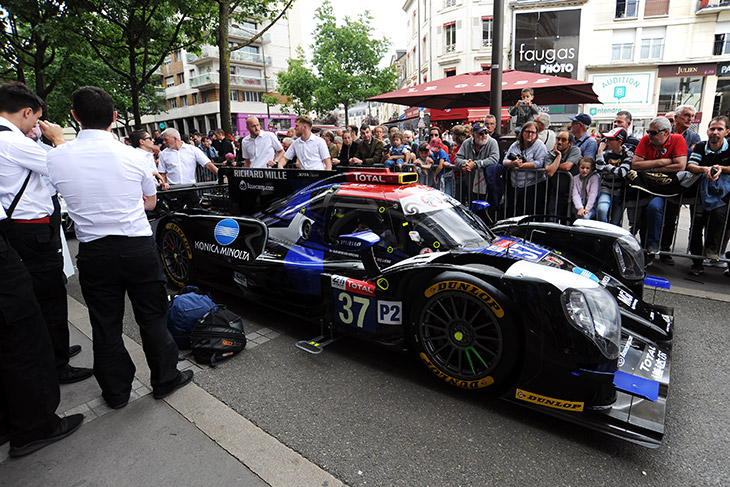 The Acura DPi driver believes that competing with the Chinese-flagged team, along with teammates Jordan King and David Heinemeier Hansson presents him with his best chance yet to get a win at Le Mans.

“I’m really excited for race week, this is the best chance I’ve had at a win in LMP2. It’s been my goal to drive with a team like this here,” he told DSC.

It has been a learning curve for Taylor though, driving the ORECA 07. While it is the same base chassis as the Acura ARX-05, it’s a very different animal.

“It’s obviously the same chassis for me at its core, but it’s quite a contrast. It’s a learning curve coming from Detroit to Le Mans recently, two very different street tracks. The dash, the steering wheel, the aero, it’s all different.

“It was my first time in the car at the test, but the guys do a good job here, and they helped me get up to speed fast.”

The #38 Jackie Chan DC Racing ORECA 07 is amongst the WEC LMP2 title contenders and will compete for the driver and the team titles next weekend. Currently, the Signatech Alpine A470 crew lead the title race, but only by four points.

Jota Team Director Sam Hignett observed earlier that whichever of the leading three cars in the Championship finished highest, so long as they were well up the order, would likely win the WEC Championship.

Stéphane Richelmi, Ho-Pin Tung and Gabriel Aubry in the #38 are currently ahead of the #37 sister car in both championships. The #37 will nonetheless run its own race and not support the race of the #38.

“We are here to run our own race. […] There is never in a million years any reason for me to pull out for anyone if we have a chance of winning the race.”

On the other side of the garage, Stéphane Richelmi (#38 Jackie Chan DC Racing ORECA) confirmed that his driver line-up would not necessarily focus on winning the race: “We are first and foremost aiming for the Championship. There are 14 months of hard work behind it and the team lost that title by a few points last season. We clearly won’t be taking unnecessary risks to win the race.”

One week before the Test day, Jordan King ran the 500 miles at Indianapolis with the Rahal Letterman Lanigan Racing. “It’s been a busy couple of weeks… It’s always a challenge of jumping from one plane to another and from one car to another. Let’s say it’s been an exciting couple of months […] It’s really something special. I have also raced at Monaco so I did all three but to do two [of the big 3 tracks] in one year is tricky, physically and mentally”.

Alonso Set To Return To Le Mans In The Future

Fernando Alonso (#8 Toyota Gazoo Racing) confirmed that he would return to Le Mans after 2020:

“I am not saying good-bye to Le Mans but “See you soon”. It will be a small break during which I will be focusing on other things. It’s a given that I will return to Le Mans in the future. I like it here.”

TDS Racing’s Mathieu Vaxivière announced on social media today that his father had passed away. DSC sends its condolences to him and his family.

Bronze handprint plaques of the Le Mans 24H winners that used to be located only in the “Place St Nicolas”, downtown Le Mans have been removed in preparation for a full repaving of that area of the city centre.

The existing plaques (and the new ones to come) will be moved and spread in several other tourist sites of the city of Le Mans in the near future.

It’s the 20th consecutive 24 Hours of Le Mans for Corvette Racing. The drivers displayed a large banner with French words saying “20th Anniversary – Thanks a lot to the citizens of Le Mans”.

Ford vs Ferrari, the movie: Friday evening, 10min of the film will be shown at the Pathé theatre downtown Le Mans and at the CGR theatre of Saint-Saturnin. Free tickets for the show will be given away at both movie theatres.

Giorgio Sernagiotto confirmed that the dash of green on the #47 Cetilar Villorba Corse was a tribute to Henri Pescarolo. He further indicated that the car’s blue and green livery would change in 2020 for its first WEC season.