With its seventh win of the season, Porsche has secured the 2019 IMSA Weathertech Sportscar Championship GTLM Manufacturers’ title. The German marque did so in dominating fashion with a weekend sweep at Virginia International Raceway that saw a Porsche 911 RSR lead Free Practice 1, 2, and 3, score pole position in Qualifying and claim a 1-2 finish after two-hour and forty minutes of racing.

The #911 Porsche 911 of Nick Tandy and Patrick Pilet took home the win and stood up to constant pressure from their teammates in the #912 Porsche crossing the finishing line just 0.737 clear of the sister #912 Porsche of Laurens Vanthoor and Earl Bamber.

Corvette, Ford, and BMW could not manage a serious challenge to Porsche as the #911 Porsche and #912 Porsche ran away from the field all weekend. The two Porsches swapped the lead on two occasions, both times in the pits, including on the final stop that saw Tandy leapfrog Bamber.

A late Full-Course Yellow bunched the field but Tandy stayed poised, kept Bamber behind him, and redeemed himself from a crash in qualifying to guide Porsche to their manufacture’s title.

“It’s a perfect day we had a tough qualifying for Nick [Tandy] … but I told him to never give up and he did an excellent job.” Said Pilet, who became the winningest GTLM driver in IMSA since the 2014 merger with 12 wins.

Bamber and Vanthoor in the #912 Porsche came home in second after starting from pole. They finished 2.538 seconds clear of the #3 Corvette C7.R of Antonio Garcia and Jan Magnussen. That gap of almost three-seconds created in under 10 minutes is perfect evidence to the speed that Porsche had on the field all weekend.

Jeroen Bleekemolen made his American oval racing debut this weekend at South Boston Speedway in a Late Model car. His sixth-placed qualifying position ended up being for naught as the Dutchman brushed the wall, suffered suspension damage and did not finish the race. 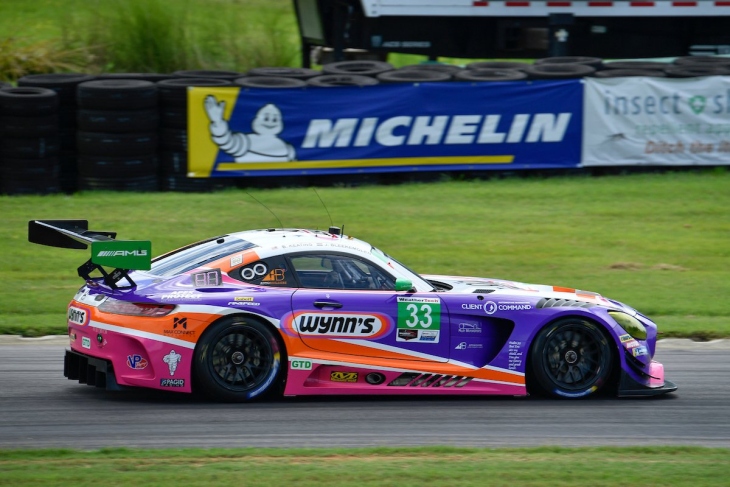 His experience back in his comfort zone in IMSA, however, was much better as Bleekemolen and Ben Keating drove the #33 Riley Motorsports Mercedes-AMG GT3 to a win at VIR, their first in what has been a difficult season for the duo, who lest we forget lost out on a Le Mans class win after a post-race disqualification.

“We got third-place a few years ago and of all the trophies on my case the little metal Michelin man is my favourite so I’m glad he will have a little friend,” Keating said, commenting on the miniature Michelin man trophies the podium finishers received.

The #86 Meyer Shank Racing Acura NSX GT3 extended its championship lead, with a second-place finish for Mario Farnbacher and Trent Hindman. Farnbacher was leading the race late in the going but Bleekemolen stormed by in Turn 1. Farnbacher and Hindman now have a 37-point lead in the championship with two races to go. Barring any major dramas, they should be able to secure the GTD drivers’ title.

Rounding out the podium was the #63 Scuderia Corse Weathertech Ferrari 488 GT3, Toni Vialnder made a late-pass on the #9 PFAFF Motorsports Porsche to move himself and Cooper McNeil onto the podium. This is the third time this season that Vilander and McNeil have finished in third.

There were two Full-Course Yellows in the race, one for debris and one for the #57 Meyer Shank Racing Acura NSX GT3. Legge was in the car went an apparent tyre-failure send Legge spinning into the tyre barrier leading to heavy front damage. Legge was out of the car on her own and appeared to be ok as she was checked by the medical team.

Two races remain in the season from Weathertech Raceway Laguna Seca and Petit Le Mans. The Prototype classes will rejoin the action for both of those events.